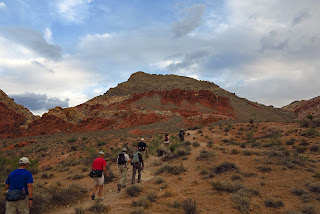 Another morning with the Early Risers brought colorful skies, cool temperatures and colorful red rock as thirteen hikers did a 5 mile loop hike around Krafft Mountain in the Calico Basin part of Red Rock Canyon NCA. We parked at the Red Springs Picnic Area parking lot and started hiking around the eastern base of the Calico Hills. The pace was quick as Roger led us past the filled in foundation and across Ash Meadows. From there, it was a steady climb up 5 Stop Hill to the Krafft Mountain Saddle. 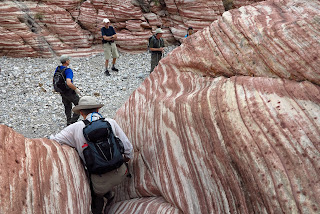 We said good-bye to a group of hikers we knew on the saddle then set off for our own drop into the lower end of Gateway Canyon. We chose the short cut that brought us down through solid calico colored rock and the candy cane chute that Doug demonstrates in the collage below. From there, we scrambled and hiked through the gravel while we dealt with the sandstone boulders, obstacles and drops. Since the sun was not over the ridges yet, the striped color inside the canyon really popped! 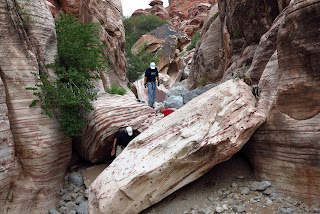 Many of the scrambling drops were deepened from last year's flooding but hikers before us have built up rocks below the most difficult parts to negotiate. We managed easily. Finally, near the end of the canyon, we stopped for a break. It was only 8am. Even though the temperatures were coolish, the humidity had us all drenched! After a nice break, we finished out the canyon and began circling around the southern end of Krafft Mountain. 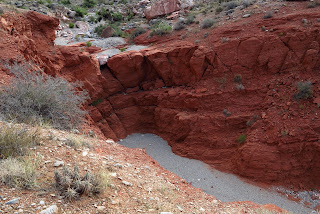 There is a 40' waterfall in the Gateway wash near the southern end of Krafft as seen in the photo to the right. We took a short side trip to see it then continued around through the boulders and sand. We passed the dirt parking lot of Calico Basin, crossed over to the Ash Creek wash then climbed back up to the hill above the cars at Red Springs. During this portion of the hike, there was a lot of hiking through deep sand. We just think of it as "cross training!" 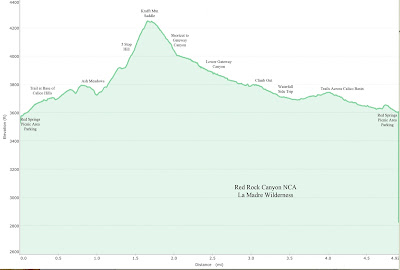 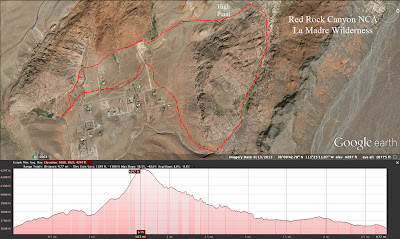 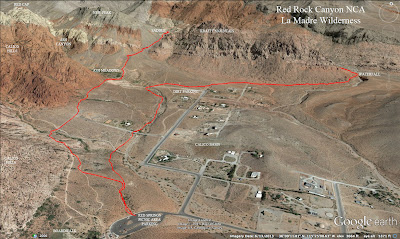 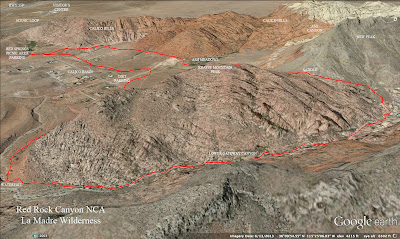 Posted by Las Vegas Cockapoo at 11:58 AM