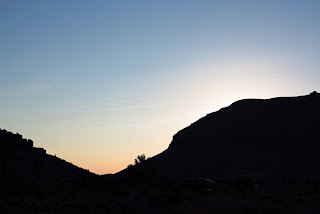 This morning's Early Riser hike to the Muffins and Skull Canyon presented sights to behold! The sun rose on a clear sky which slowly changed to small puffy clouds then big puffy clouds. The air was cool but extremely humid and our bodies leaked water throughout the hike ... somewhat unusual for the Las Vegas desert. We parked at the Cowboy Trails trailhead on Highway 159 in Red Rock Canyon NCA and began our hike past the horse corral. Tails were switching all over the yard as the horses did their morning routine.

As per instruction, we climbed up to the Muffins at our own pace enjoying the shady side of the North Blue Diamond Hills. 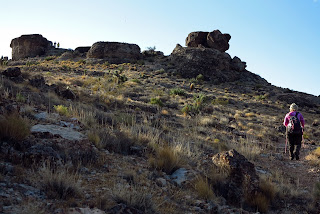 There was a large group of the fifteen hikers leading the way, then the rest of the hikers were spread out over the side of the hill. When we reached the large conglomerate caliche rocks we call the Muffins (because of their shape) most of us were rewarded with a nice long break while we waited for the last hikers to arrive. We climbed over on the overlook rock and viewed the Las Vegas Strip through the rising sun.

The sunlight for photos at the Muffins, was optimal. Colors popped and the sky was doing its little puffy cloud act over the Red Rock Canyon escarpment. 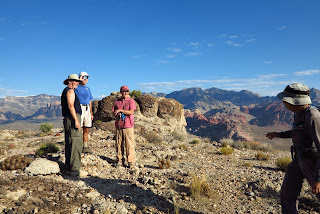 While we waited, Roger taught us how to use his special mirror to signal helicopters. (There's a piece of knowledge that no one hopes they get to use!) Finally, the last two hikers arrived and after a couple more minutes, we began hiking up the ridge on a trail that fades in and out near the left side. There were several small sea fossils embedded in the rock around us. The ancient black chert, younger cacti and yuccas finished out the landscape with the background scenery of the Calico Hills and escarpment.

When we stopped to wait for the slower hikers, happy faces turned to the camera. 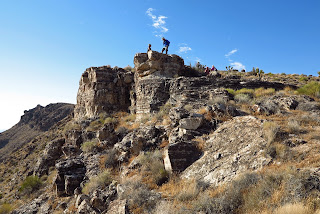 Our weak ridge trail T-boned into a stronger trail and we turned left. This trail led us down and up to the Old Las Vegas Overlook where we took our official morning break. Most of the hikers climbed up to the rocks to the right of the overlook as seen in the photo to the left. The photo below was taken on the hill to the left of the overlook. The sky was becoming more and more gorgeous as a weak weather system approached the Spring Mountains. We have had quite a bit of rain this week and this is the tail end of the monsoon run.

After our break, we returned to the T-bone and continued hiking down to the top of Skull Canyon where we then took a turn to the right into the canyon. 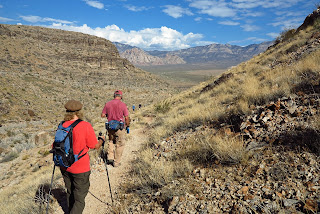 The descent down Skull Canyon is a trail all the way, however, the hiker has the option about half way down to scramble down the middle of the wash. Some of us mixed up our descent ... a little of this and a little of that. When we got down near the bottom, the canyon dropped more steeply than the trail. But, soon, we were also dropping as we passed the Muffins trail turn off. When we reached the floor, the pace sped up and we got back to the cars quickly.

After an almost 6 mile hike with 1300 feet of elevation gain, the weather had heated up and we were happy to have finished before the heat of day had really set in. 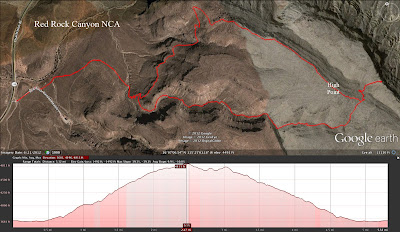 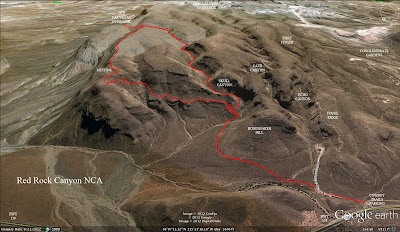