Eleven hikers chose a Super Scramble for Tax Day's adventure in exercise. We set out very early in the cool morning air at the Sandstone Quarry parking area on the scenic loop of Red Rock Canyon NCA. Our first stop would be the arch in the Sandstone Quarry area. Yes, the redbuds were in bloom in the canyon on the back side of the arch.


We began our climb up to the Phase I Peak on the ramp next to the arch. The ramp turns into a beehive traverse and a climb up through a slanted crack. At the top, we turned right to drop and go around the small peak in our way. From there, we continued going up until there was no more "up!" At the top, we had beautiful views of the sunrise light on the escarpment.


There are small tanks on the peak but they were all dry. We descended half way down the way we came up then turned toward the Calico Tanks Trail and descended the rest of the way. We followed the Tanks Trail until just past Mass Production Wall. From here, we headed up the side of the hill to the right where a rocky crack took us up behind Rooster Rock. Following the ridge, we arrived at the major climb of Phase II.


At the top, there is a large tank with water on the left side of the hardened dune. We also checked out the Pretty Tank further up. Next, we crossed over the sandstone, found another couple of dry tanks then dropped into the brushy traverse on the other side of the hill. Still brushy! The sunken tank appeared ready for swimming ... but, how would you get out? Next, we bypassed the rock fall by circling around to the Long Pool (also dry) area.


From the Long Pool, we surmounted the Lower Calico II Overlook for our morning break. The conversation was flowing today. So much to talk about! (How about old Cliven Bundy? Etc.) We enjoyed our break then needed to move on.

The cloud cover was holding out for the most part. Once in a while, the sun would peek through and we would realize that we preferred the clouds!


This new part of the route, that began at the rock fall detour, then began completing the circling of the Calico II Peak above us by climbing the rock wash on the other side of the peak. This was a major climb but very enjoyable as it peaked out on a steep beehive hill to the right. Way below us to the right was the main Calico Tank. We were careful with our foot work! Danger! Danger!


Next, we dropped down to the familiar approach to Calico II Peak. There is a new log book on the peak and we signed all our names. No time to hang. The Crack Descent was coming up! The Crack Descent was first shown to us by Neil. It is a very exciting way to descend off of this peak. Much care and skill is needed but it does not require ropes or anything. So, this is the way we got down today.


We finally ended up very near the main Calico Tank. Just a little ways down and to the right, we climbed up the white sandstone to take a "look see" at the tank that resides just below Calico Peak. We continued past the tank and dropped down to a back alley where only locals go. The red sandstone took us down to the wash then out to the main trail. Steps took us down to the Mass Production Wall area then we left the trail again. We took a steep short cut down to the next flat area of the main trail then began hiking around through the Red Cap Trail byway.


We turned to the right to hike up a little used gravel wash. The wash ends at a slot we call Turtlehead Canyon because a view of Turtlehead Peak is centered through the canyon. The climb out of the canyon is somewhat difficult but the hikers today live for a challenge! From the exit, we climbed straight up to Rattlesnake Trail and turned left. This old and little used trail took us up to a cove within some white sandstone peaks.


The peak on the left as you enter the cove was our last (Phase III) climb of the morning. At the top, there is a very pretty tank that we might as well call Turtlehead Tank due to the view as seen in the photo below. We descended the same way we went up then hiked around to check out the petroglyphs at the old shelter area. Afterwards, we dropped to the Turtlehead Trail and followed it back to the cars. A fine morning of working out!

In memory of Mrs. Thomas. 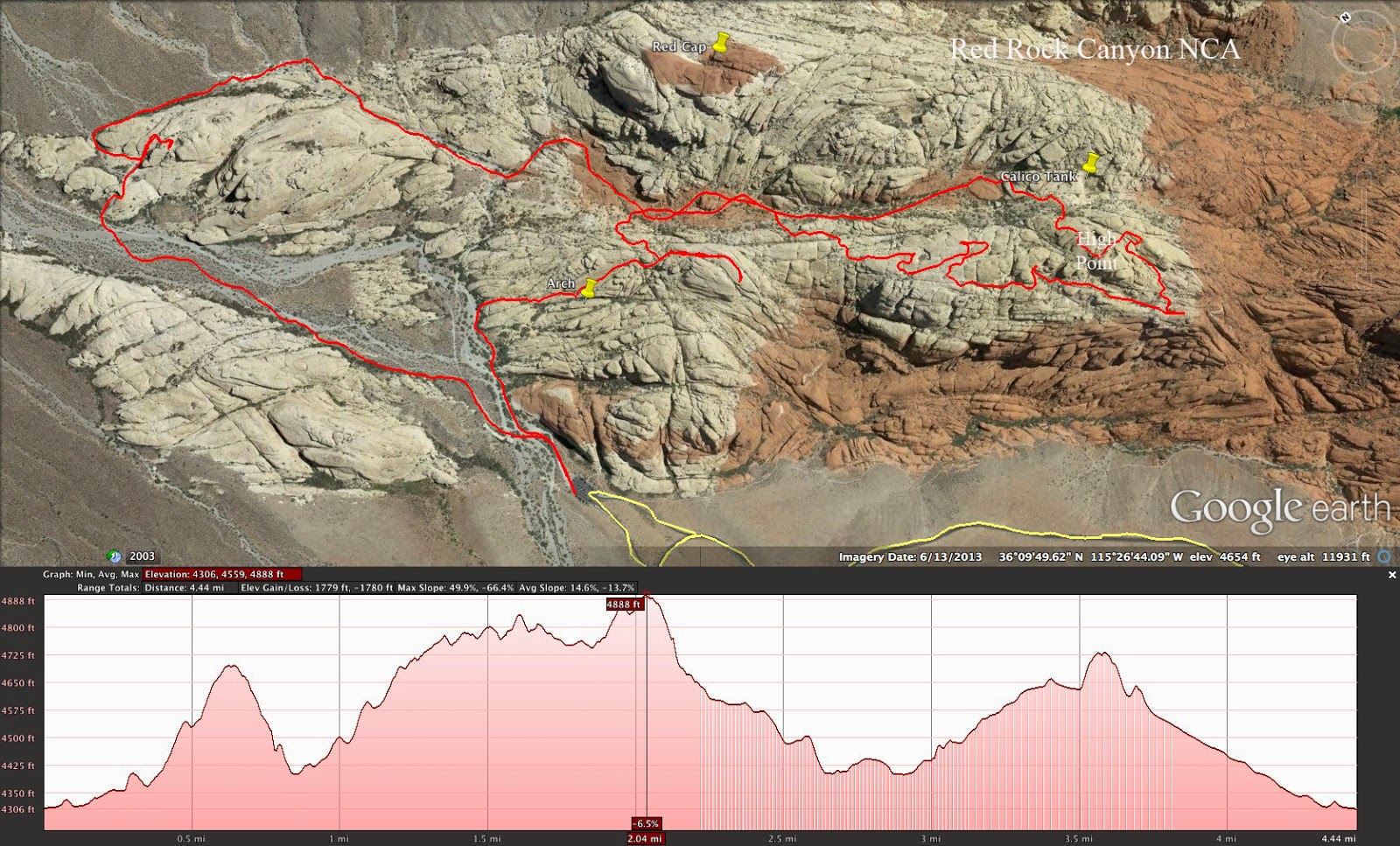 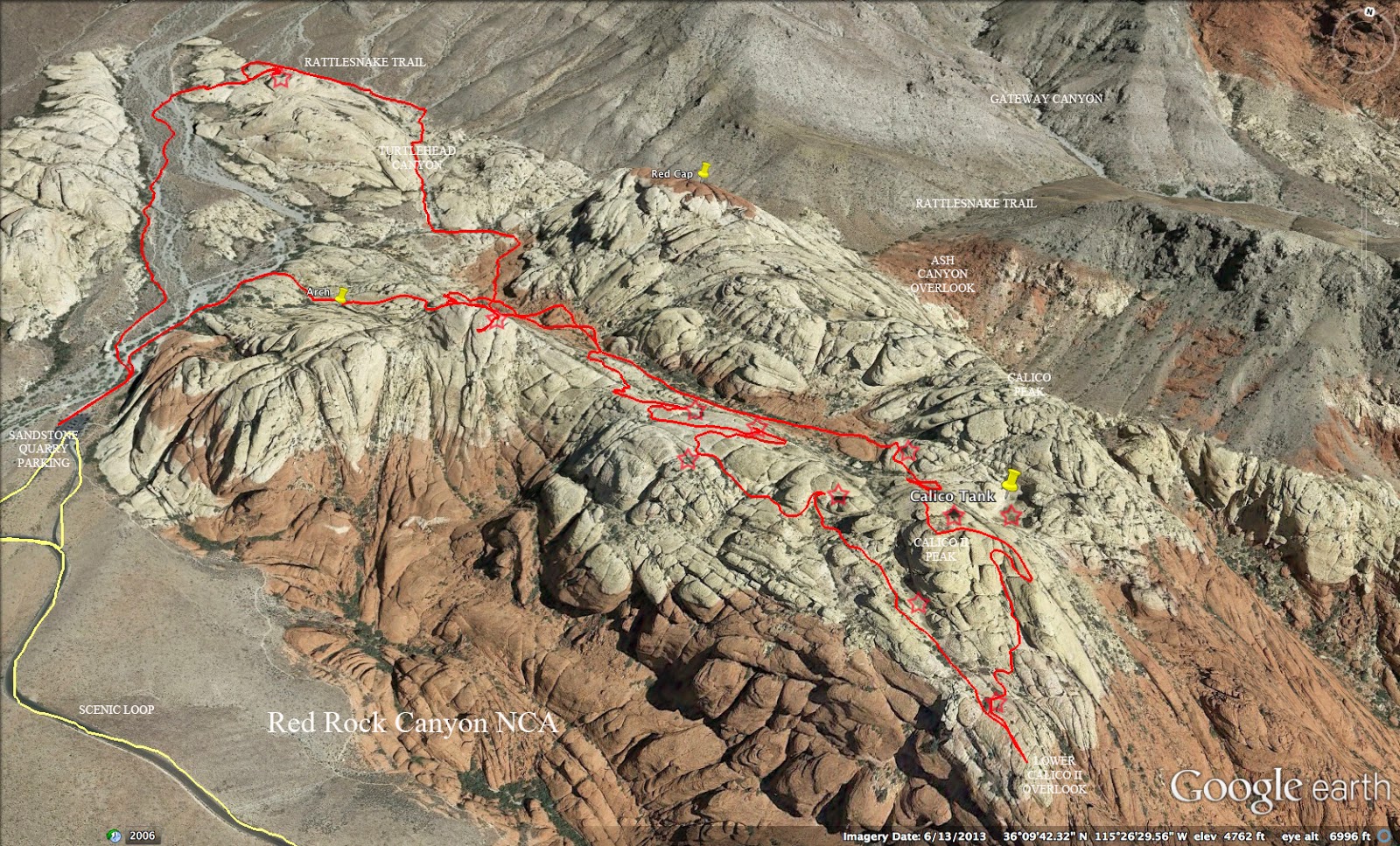 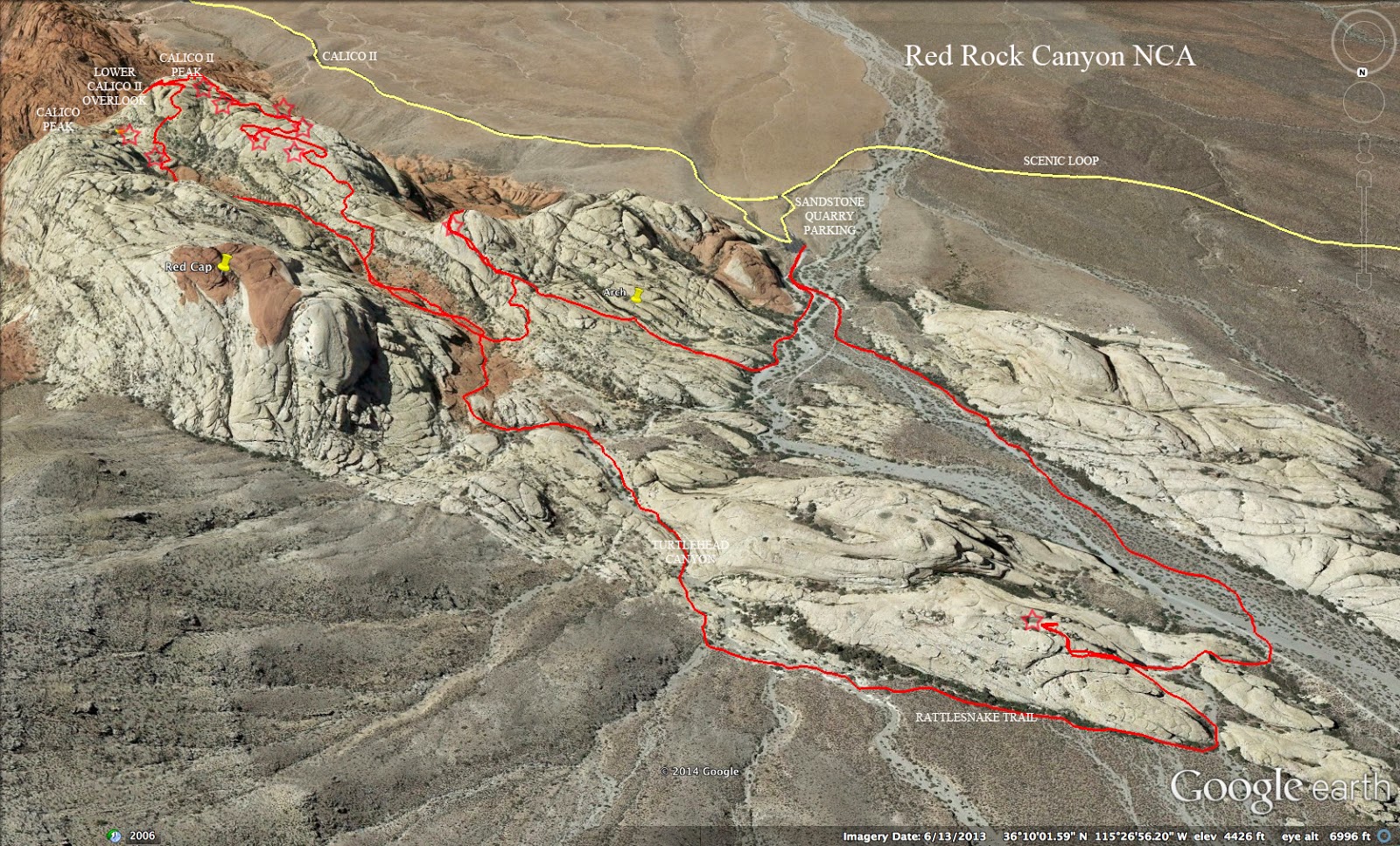