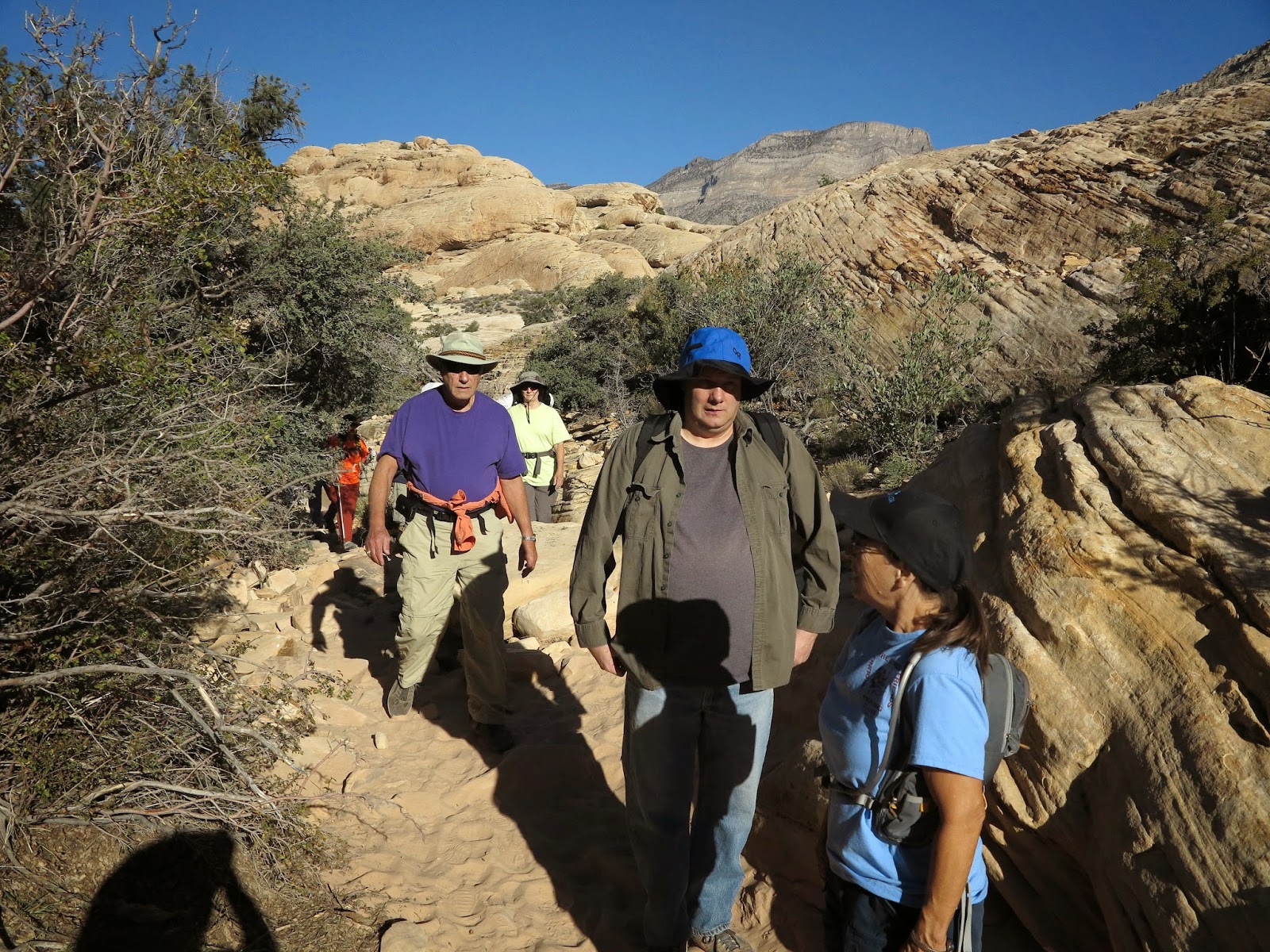 Eleven hikers opted for the leisurely hike on the Calico Tanks Trail from Sandstone Quarry. This trailhead is found on the Scenic Loop of Red Rock Canyon NCA. If you are familiar with scramble hiking, this trail is a beautiful hike with some easy scrambling. If scrambling is new to you, this is a great hike as an introduction to scrambling. We had one hiker, today, who had not scrambled before. She did very well even though she was not able to get all the way to the tank.

We left the Sandstone Quarry parking lot where there were already many cars. After we passed the Turtlehead Peak turn off, we noticed that the Calico Tanks trail has been slightly re-routed in the area where there was a huge flash flood last year. 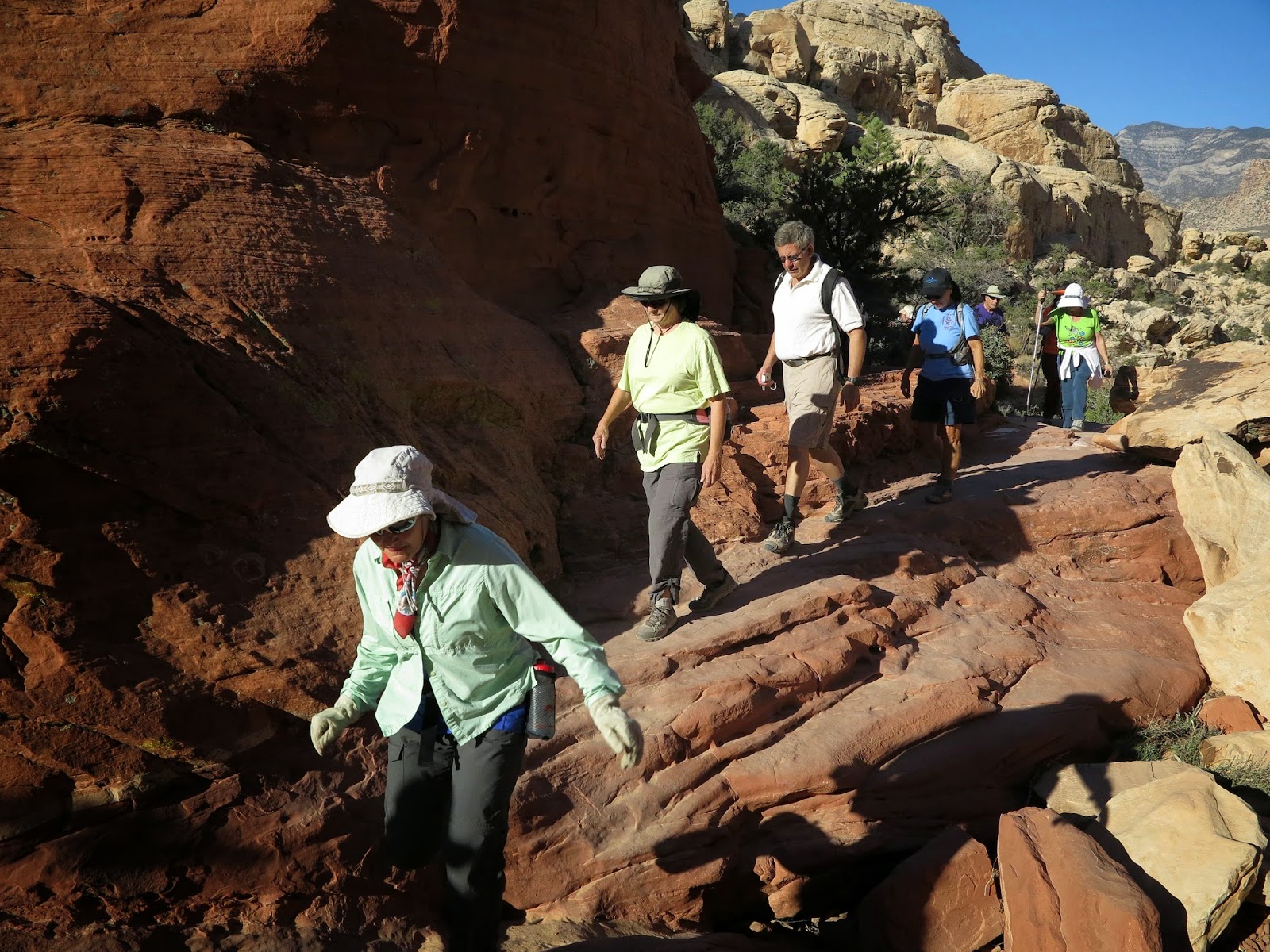 We trudged through the sand on the way up the trail and were happy to finally hit the sandstone section. With the sandstone, came the scrambling. We were cautioned to be careful of the rocks covered with sand. These slanted stepping stones can be very slippery. It helps to make sure that your own shoes are free of sand before stepping on those rocks.

The first level change brought us to a layer of red sandstone. Turtlehead Peak rose to our left and then behind. 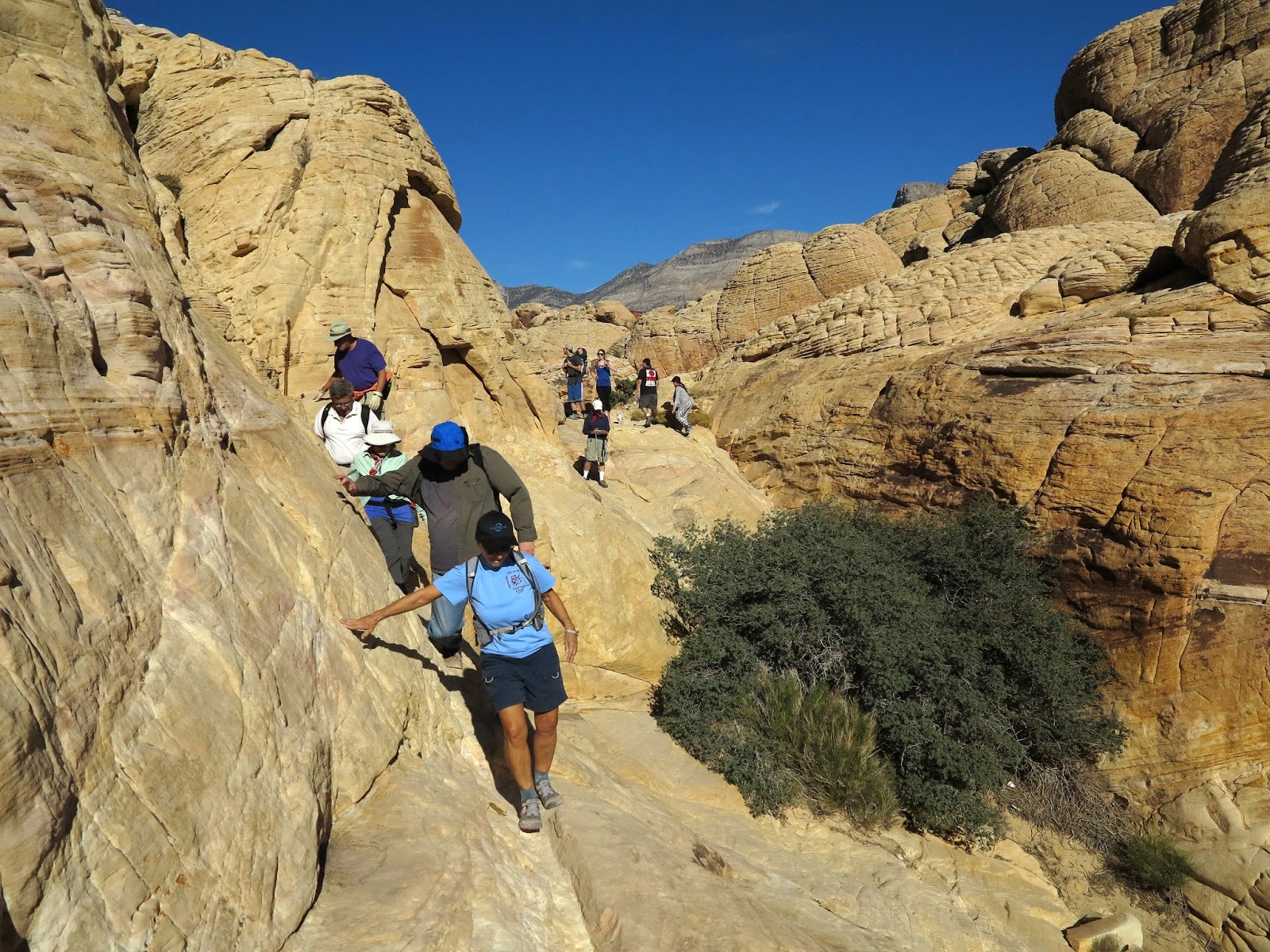 From the red layer, we went back into a white or yellow layer of rock and the many stair steps of the trail began. This trail was made back in the 50's when the Nevada Conservation Corps built the steps up to the main tank or tinaja. When we reached the top of the final section of steps, we dipped over the crest and saw that the large main tank was almost as dry as this writer has ever seen.

There are three ways to hike past the tank: 1) drop down to the tank level and hike across - This option requires a scramble down and a scramble up. 2) climb up and around on the right - This is probably the safest route. 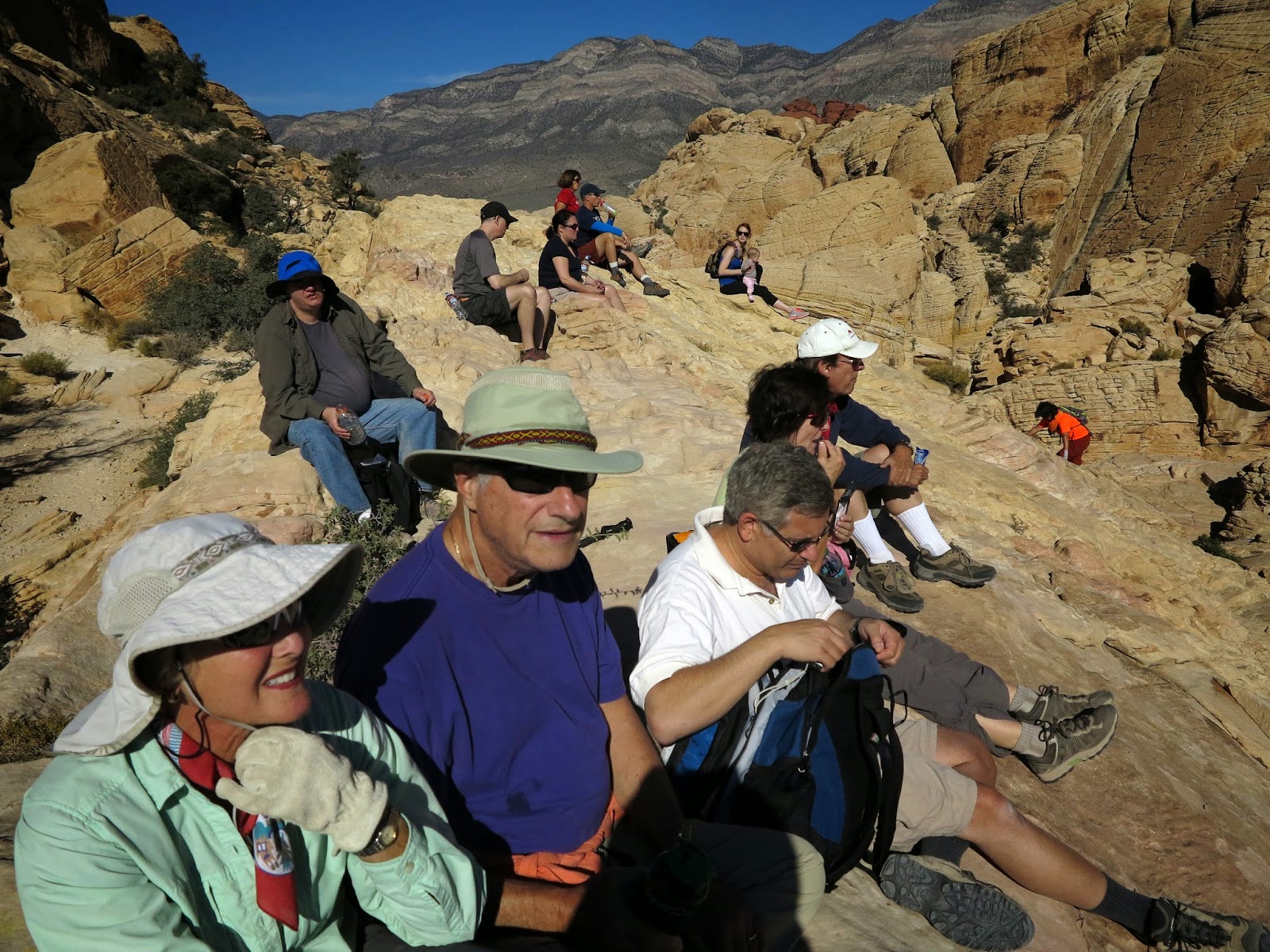 And, 3) hiking on the tiny ledge in the sandstone to the right - This is the option that most of us chose today. It provides a little excitement and is pretty safe if you make sure you find hand holds and lean in to the rock wall. After the ledge, you have to scramble up the rock fall to end up on the opposite end of the tank where there is a great overlook with stadium seating. We took our break here.

After our break, we returned via the ledge. We were encountering many other hikers on this beautiful Saturday morning. 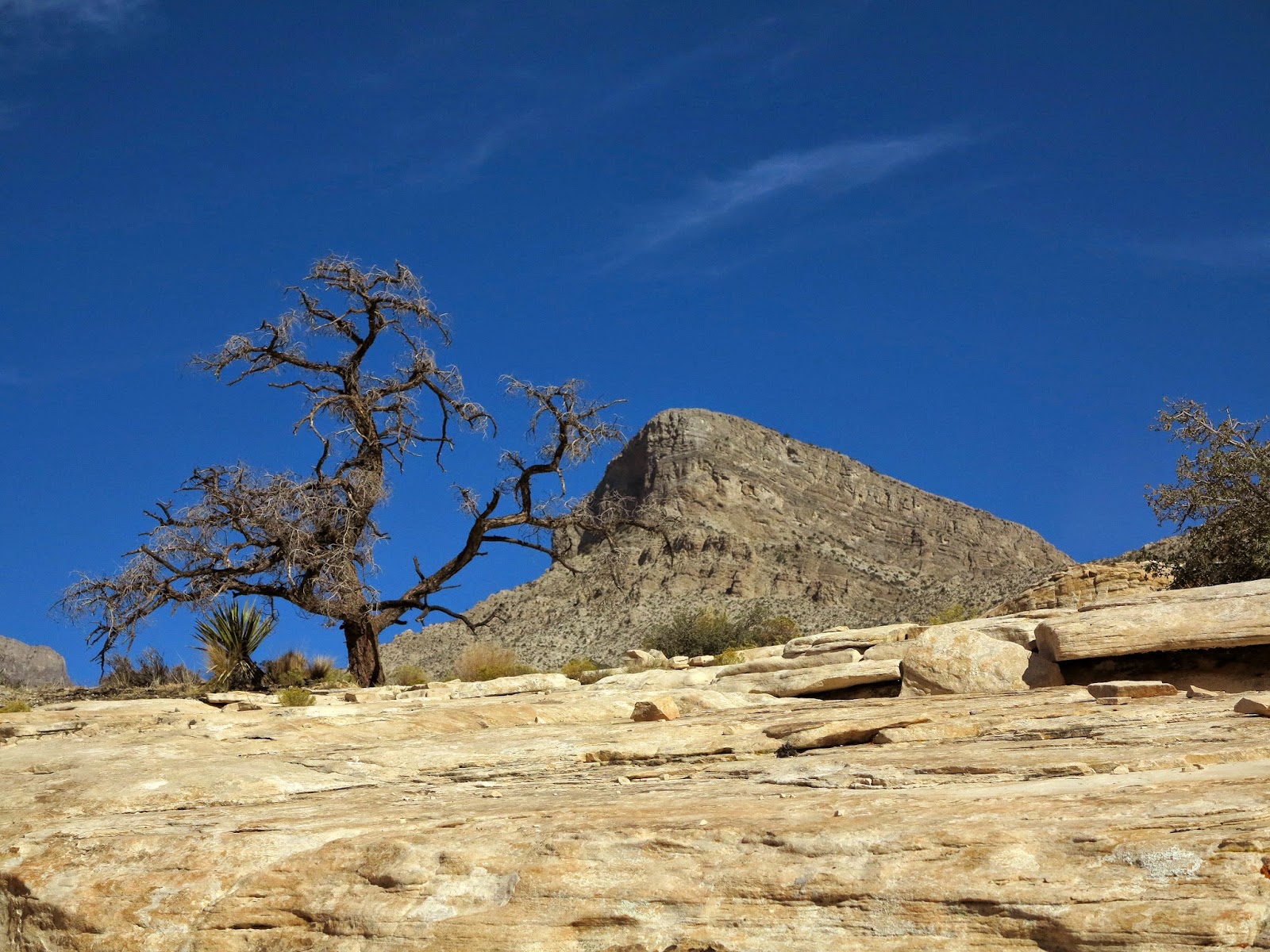 When we got to the red layer of rock, we turned off trail to the right. This route would take us parallel to the sandy part of the trail but keep us on solid rock. We merged, again, with the trail at the tributary wash. On the way out, we took a look at the damage done by last year's flood and also noted the agave roasting pit. It was a very relaxing hike. 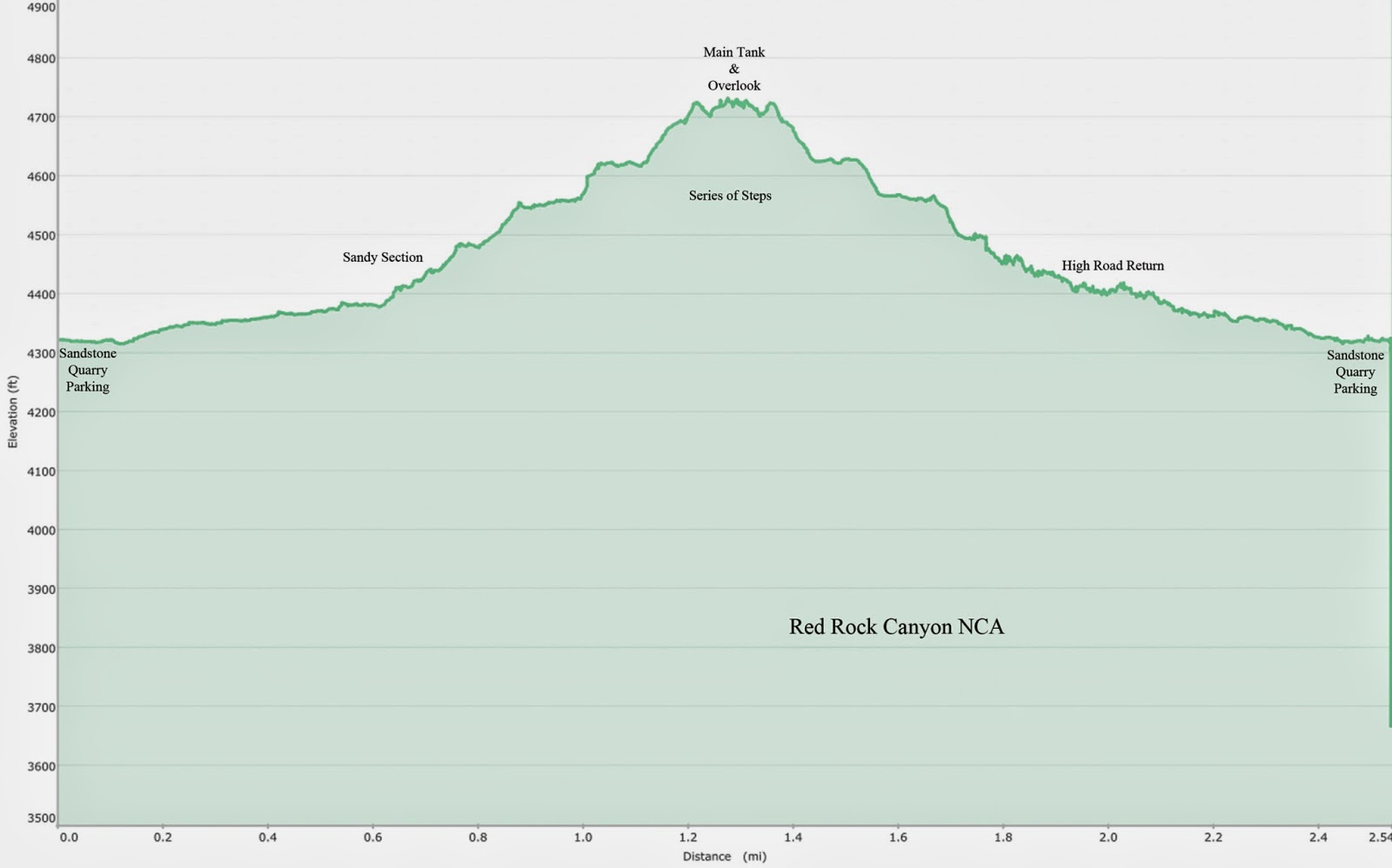 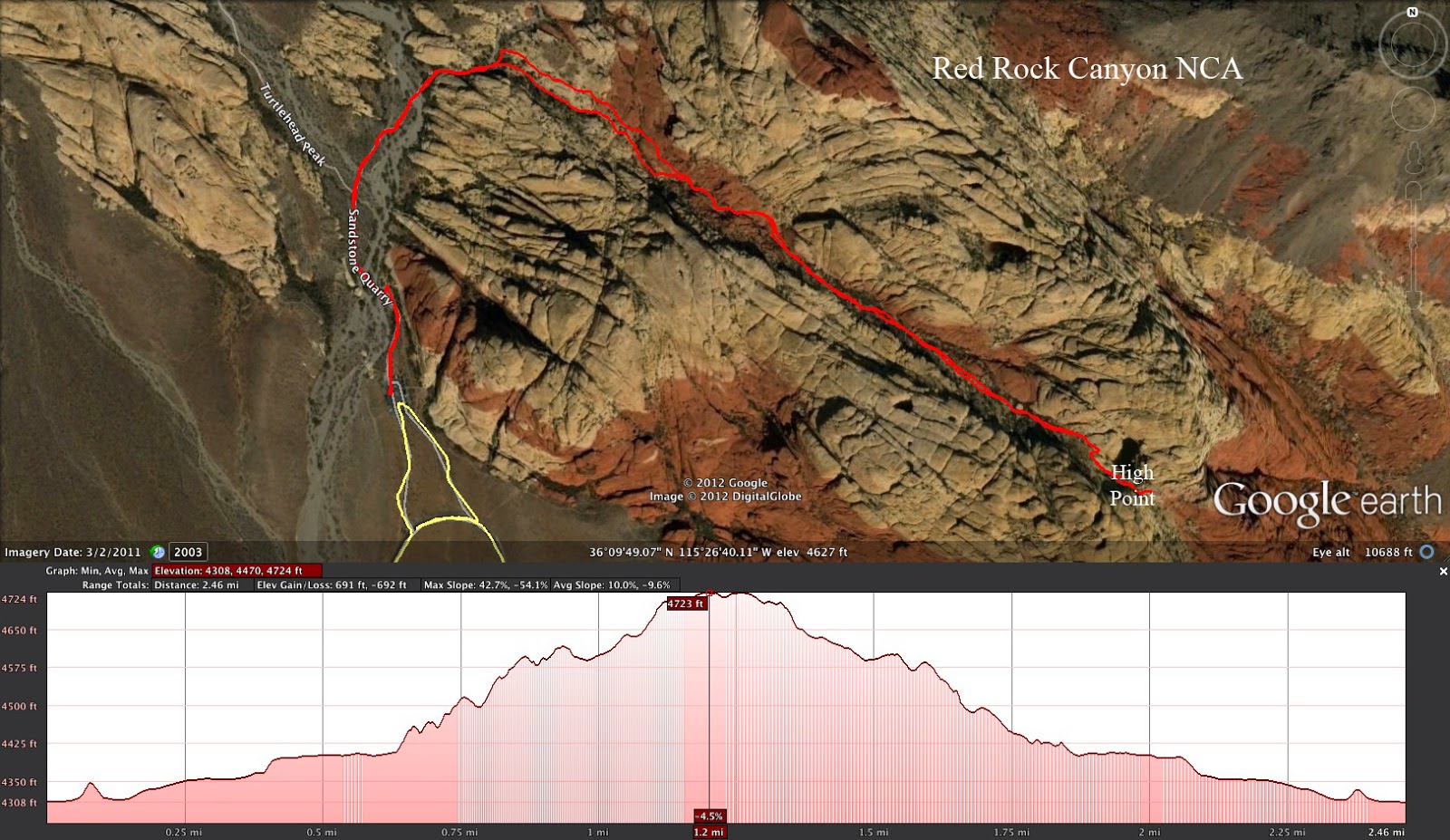 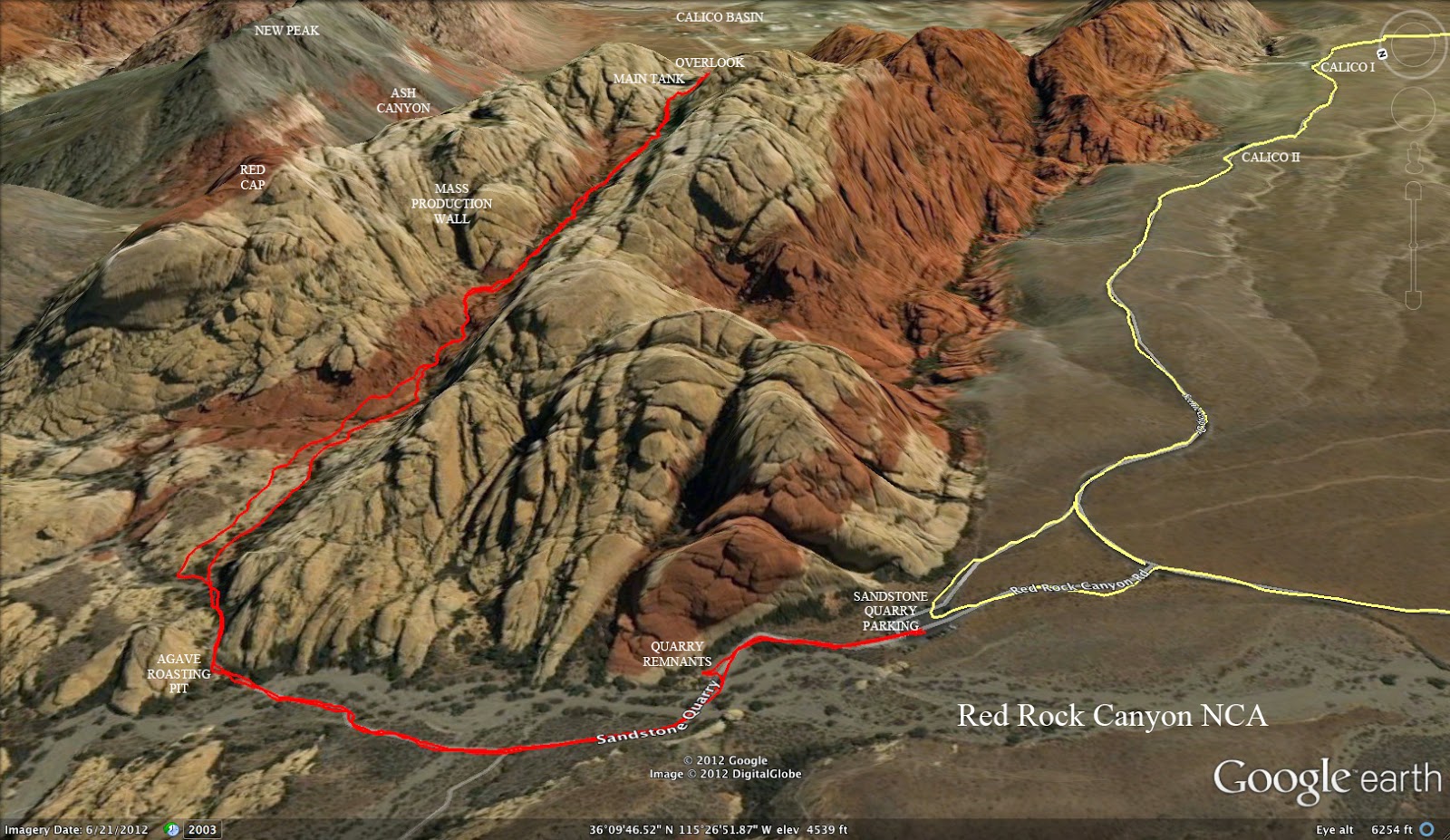