The Murphy Hogback Loop hike is located in Canyonlands National Park on the Grand View Point Road approximately 3 miles past Mesa Arch. Six hikers gathered at the trailhead at 8:30 in the morning for the 11.5 mile hike down the cliff and around the loop. Between 1917 and 1920, the Murphy brothers grazed cattle above and below this cliff area. They ran the cattle up and down this trail and the trail bridge found halfway down the cliff was first built during this time. Today's hikers figured that if cows could negotiate this trail, so could they!

We were the first in the small parking lot with several others close behind. The first mile of the trail is an old road that passes an old corral. Next, we pass the turnoff for the Murphy Point Overlook Trail.

Here, the cairns took us to the edge of a high cliff where we had to do some searching for the trail. We decided that there must have been a different trail before as Jerry, our coordinator, had an old track that went a different way.


Soon, Jerry found the cairned route down the cliff to the left. We took several photos of the vast Canyonlands view then headed down. It was very exciting for the writer to be switchbacking down such a steep route but she never felt unsafe. We were in the shade but we didn't know if the shade would still be there on the return. We DID know that the return ascent would be difficult after the long hike. As we descended down the cliff, this was on all our minds with each step.

The switchbacks were well maintained. There were steps built into the trail in many places. But, footing was still uneven.

Did cows really do this? Well, that's not entirely clear.


About half way down, we got to the old bridge. It was not nearly as scary as some articles intimated. One side is braced against the cliff wall and the bridge, itself, is approximately 5 feet wide. It is a stretch of the imagination but the view going up is more dramatic than the view going down. Next, we continued down among dirt, boulders and brush. We were slowly approaching the next desert floor level.

We could see the two sides of the loop trail from our approach to the loop junction.

As suggested, we turned to the right at the junction. This would give us morning light views of the canyonlands beyond the Hogback. (It would also eliminate the necessity of climbing a particular section of the White Rim Road later.)


To get to the Hogback, the trail circles around the base of the cliffs. Before we left the shade of the cliffs, we stepped off the trail, using a small wash to tread in, for a short break. While we rested, we saw a jack rabbit and took photos of a large rock formation called a toadstool at the base of the cliff. We also spied two ravens who were waiting for us to leave from a distance. As soon as we hiked back down the wash to the trail, the ravens swooped in to see if we had left any crumbs. (Hmm, I bet they've done this before.)

Here, we must remind hikers that Canyonlands and Arches are both very serious about "not busting the crust!" Meaning, do not step on the cryptobiotic soil! We were very careful to use slickrock and small washes while hiking over to the large toadstool off trail.

As we started out the Hogback Trail, we got a great view of The Candlestick on our right.


The hogback trail gave us large vast views on both sides. There are two different places where there is an overlook trail to peep down over the side. The first photo of this entry was taken from one of these. We could see the Green River and part of the White Rim Road below us. The road was so intriguing to Laszlo that, two days later, he decided to take his jeep out for a 4WD day along the high clearance route!

The hogback narrows into a neck saddle then climbs back up. Not long after this, we junctioned with the White Rim Road where it climbed up to meet us.

The junction area serves as the Murphy campground. There are pit toilets found below here but there is also one found not much further along the road going in our direction.


We took a break at the pit toilet and campsite with a view. The large flat rock on the cliff was dubbed the "Portabello Mushroom Rock!" Continuing on the road, we turned the corner and found ourselves going down. The road became very narrow and very rough ... and very steep for an uphill climb. Our downhill continued for around a mile as we passed a few hikers that had started out just after us and had gone the other direction around the loop.

The roughness of the road continued all the way to the wash junction where we turned left. The ground was a bit muddy here but dried up soon enough.

The long hike up the gentle part of the wash became tiring. After all, we had hiked 8 miles by this time.


We hiked through the chinle layer of rock bordering the wash and passed a very small old corral. Then, the wash started get slightly steeper. The increase in slope had become noticeable when we finally reached the loop junction. We sat for a short rest before tackling THE PORTAL cliff trail. It was hot. The shade had been reduced to one side of the upper portal switchbacks. Four of the hikers seemed to make quick progress up the trail. Kay slowed to a crawl as Jerry relented to the sweep position.

The climb up the cliff was no easy task after a nine mile hike. And, the temperatures around 75 degrees didn't help.

While Kay and Jerry made slow progress, the other hikers sunbathed on the overhanging rocks. And, took photos of the last two hikers.


Finally, everyone was back on the Island in the Sky. This little fellow, to the right, greeted us. Following the cairns back to the old road, we headed on back to the cars. This trail was thoroughly enjoyed. It is the epitome of the Canyonlands NP experience. 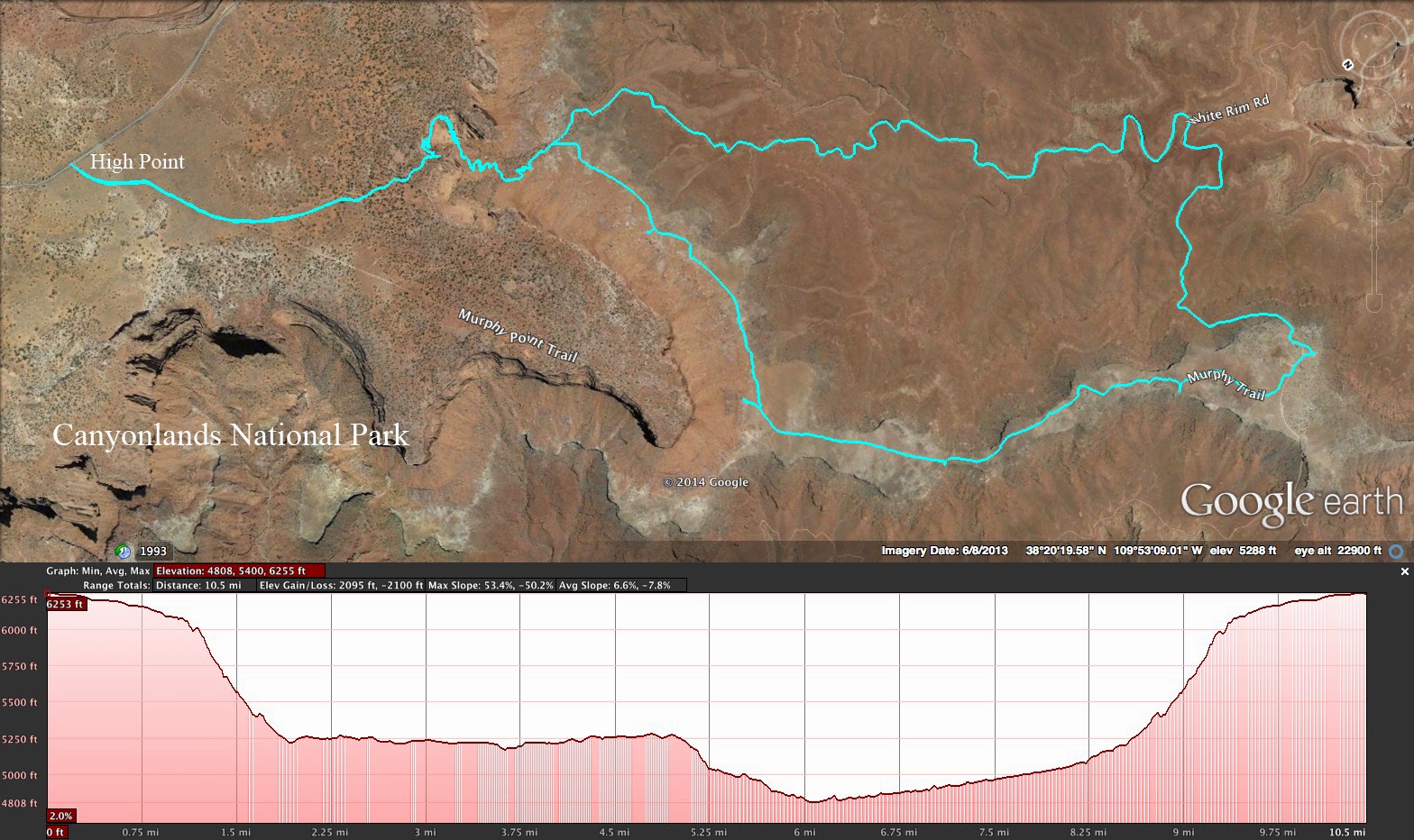 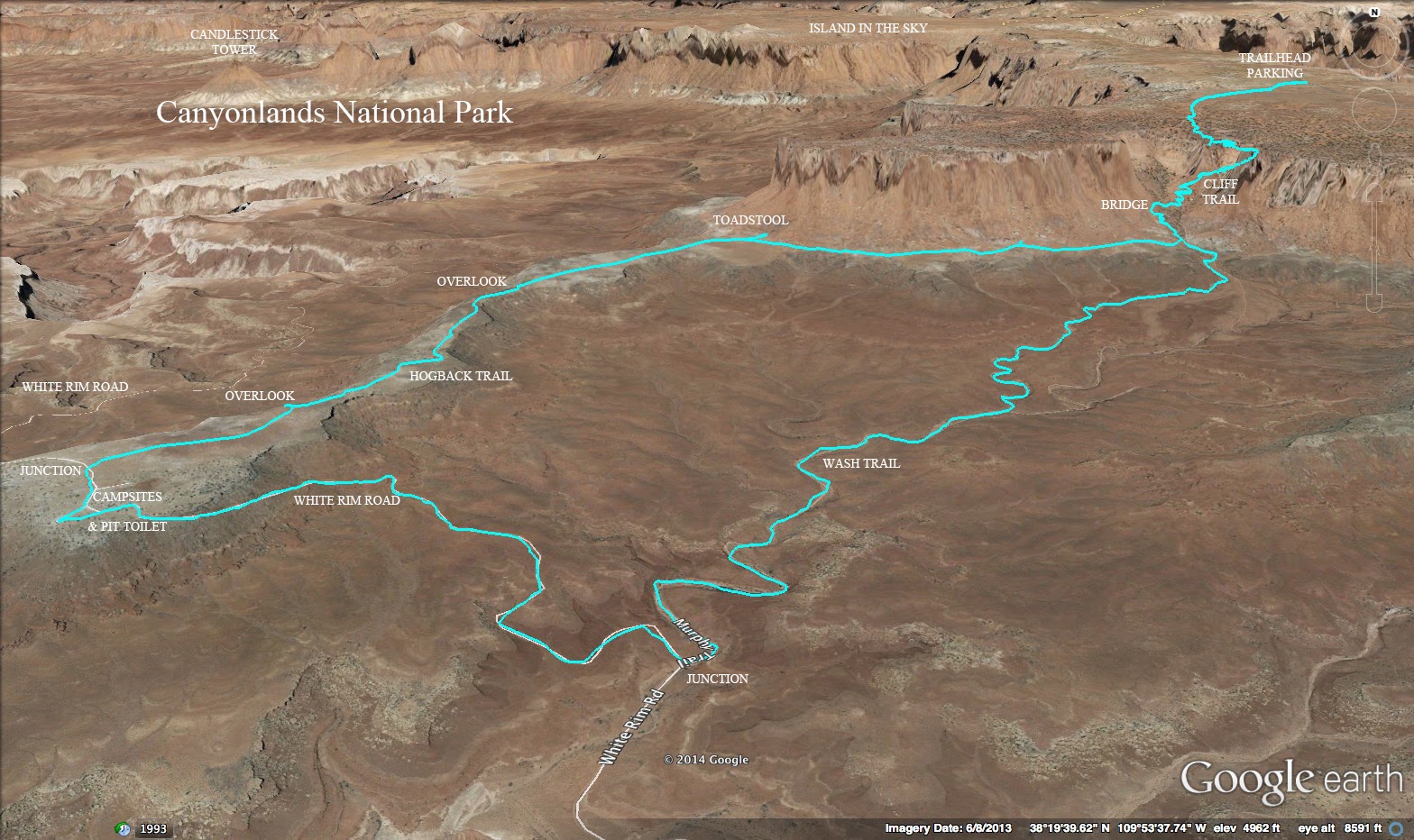 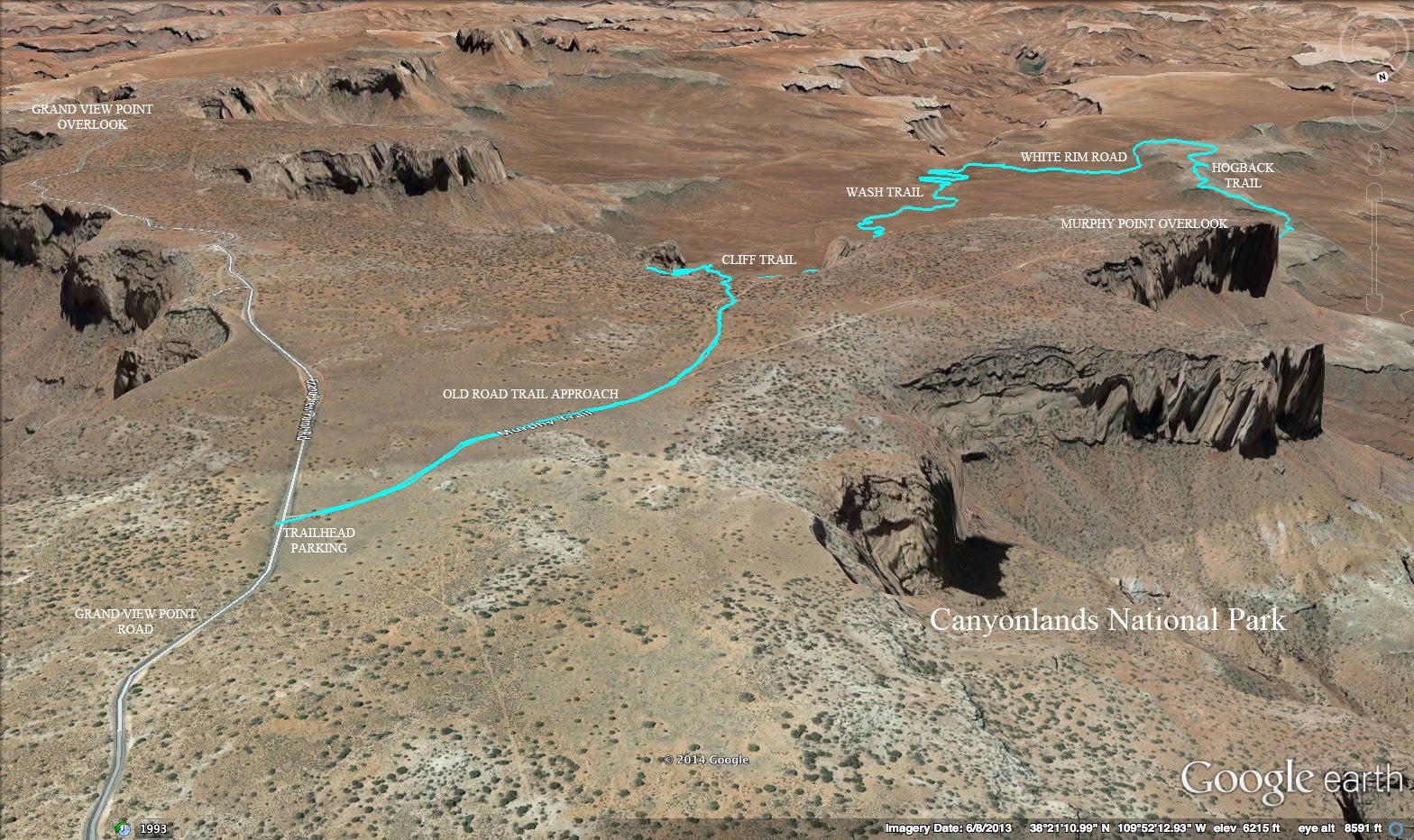