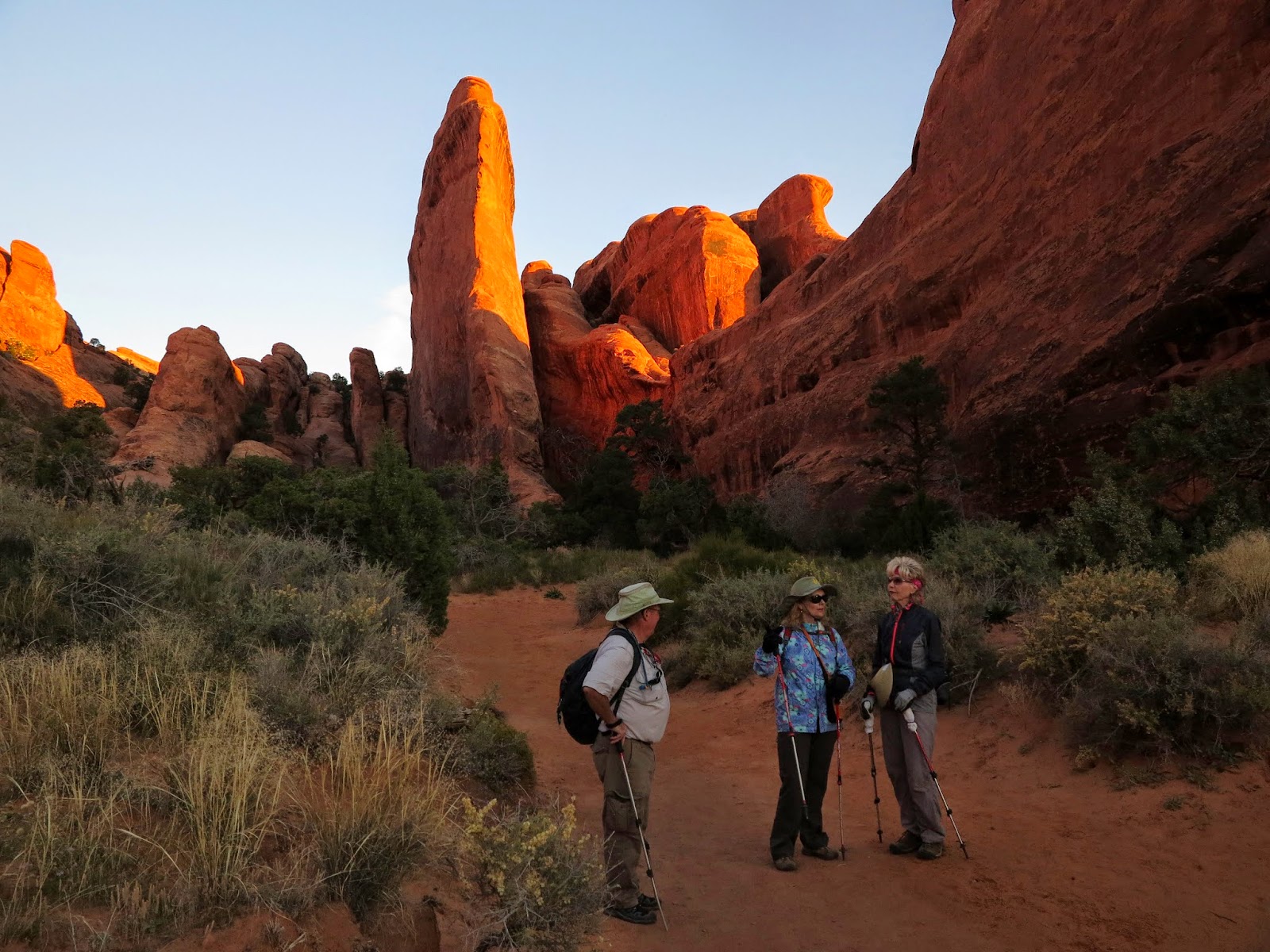 The Devil's Garden Primitive Loop hike is located in Arches National Park at the end of the Arches Scenic Drive. The park service has recently enlarged the parking lot to hold twice as many cars as previous years. Nevertheless, when we completed our hike that began at sunrise, spaces were at a premium. (We thought about selling our space but decided not to!) So, seven hikers started out in the darkness with headlamps and headed to Landscape Arch about a mile up the trail.

We waited about ten minutes for the sun to rise and when it did, the arch lit up! We got our photos as seen in the first photo of this entry then began our hike. Immediately after Landscape Arch, the scrambling began.

We scrambled up the slickrocks to a level above the numerous fins in the area. Here, there are two spur trails that lead to Navajo Arch and Partition Arch. We took both trails for our arch viewing pleasure! 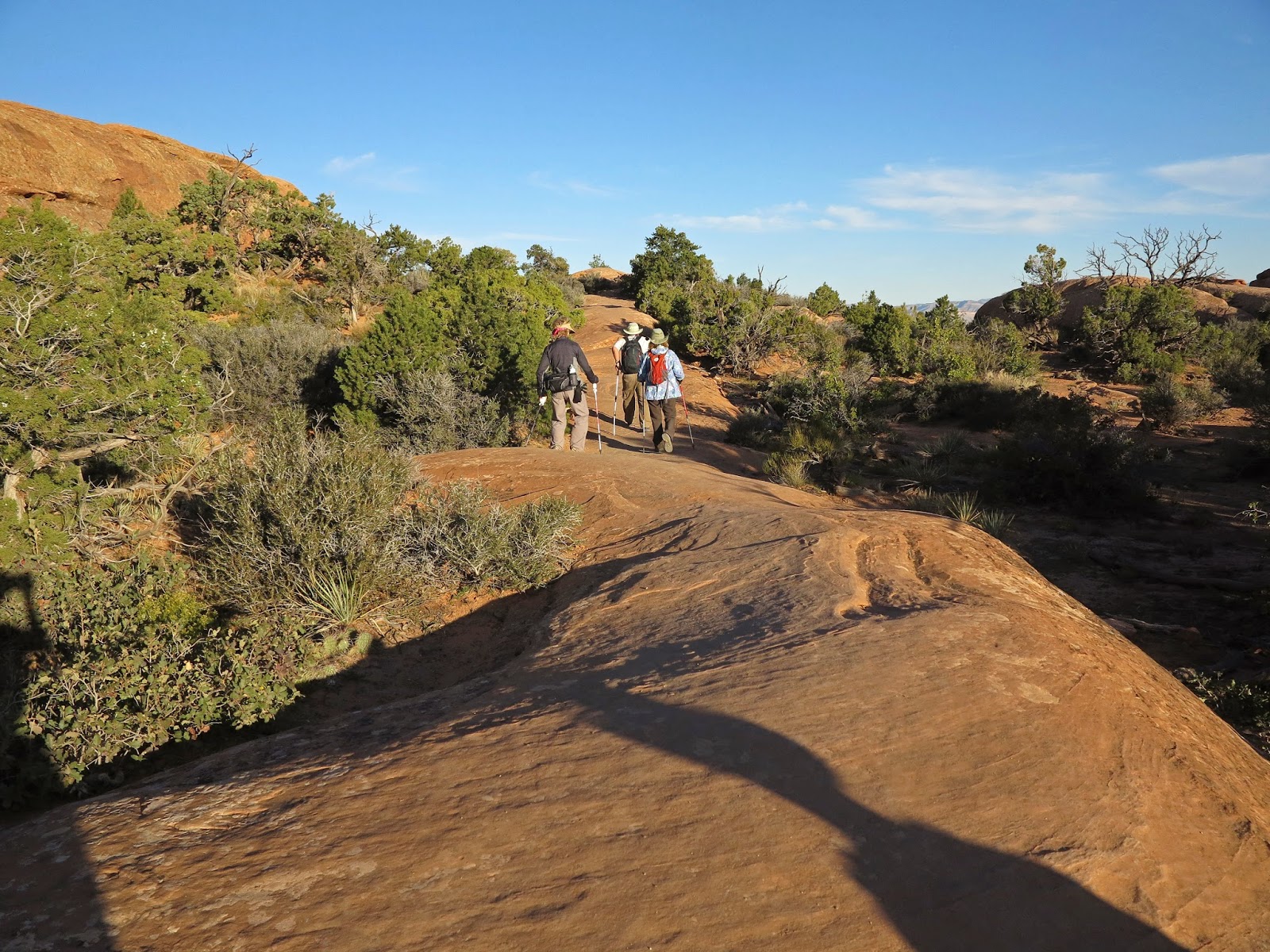 We returned to the main trail and followed the cairns along the slickrock. The day before, the moderate group had done the same trail as an out and back. Today's strenuous hikers planned to do the entire 8 mile primitive loop. Our group did the loop clockwise and a second strenuous group did the loop counterclockwise. Knowing what we know now, it is probably more difficult going CCW simply because of some of the slippery fins that would have to be climbed instead of descended.

A highlight of the hike is the fun fin walk! Our CW group hit this as we neared the turning point area of Double O Arch.

Double O Arch is made of two arches, or windows, one on top of the other. Some of our group climbed through the lower window and sat for a break on the other side. 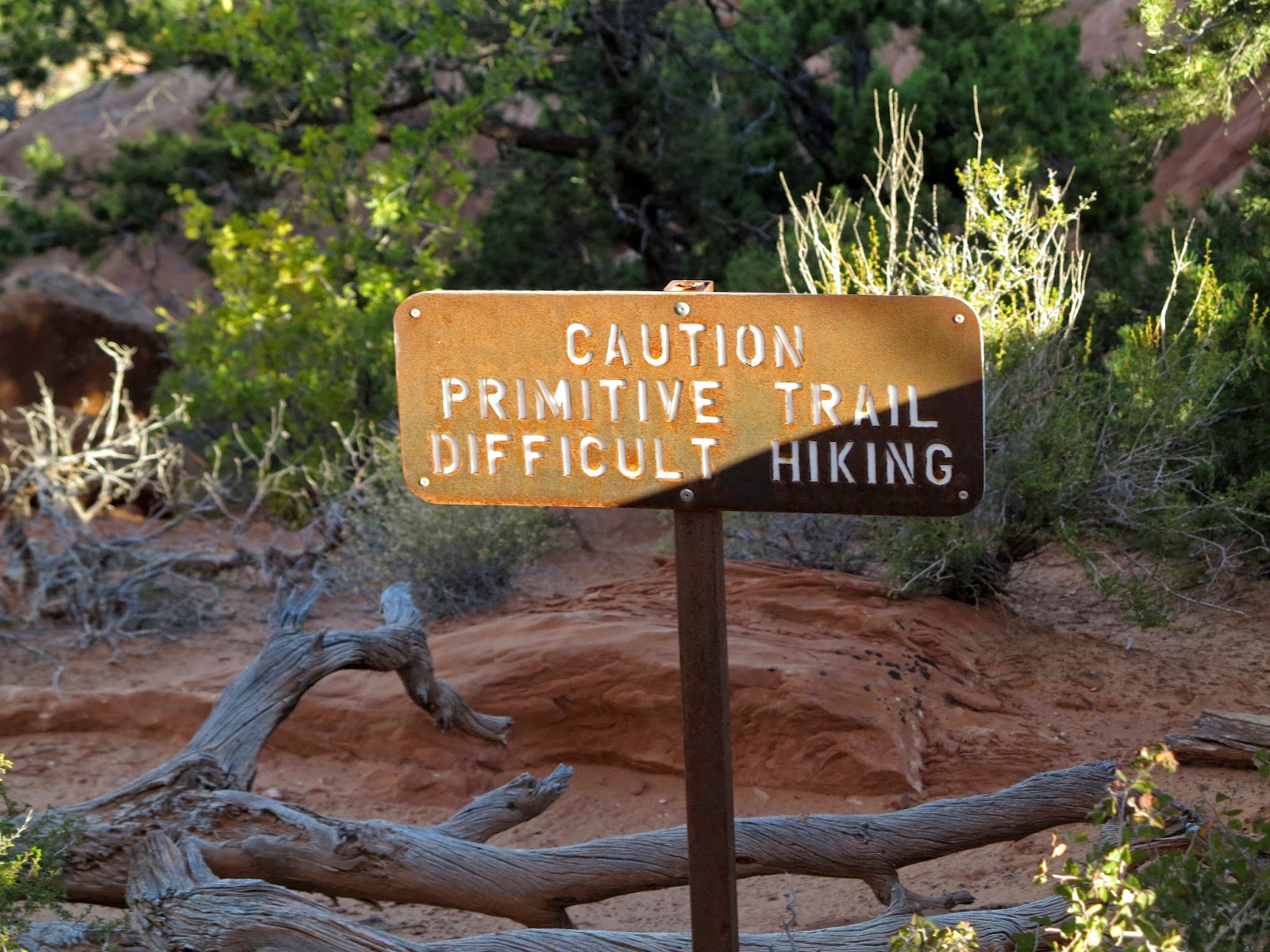 When we started again, we were faced with a sign telling us that the rest of the loop would be more difficult. Bring it on! As we headed down the trail, we ran into the CCW group coming toward us. They were excited and tried to tell us a way around a water hole coming up. Several hikers had not met some of the other hikers so we went through introductions. A minute or so of talking and the trail called to both of us. So, we passed and continued around to what came next.

We circled around a corner and watched a window, high in a fin, go by. This one didn't have a name.

Soon, we found a sign that pointed to another spur trail to Private Arch. 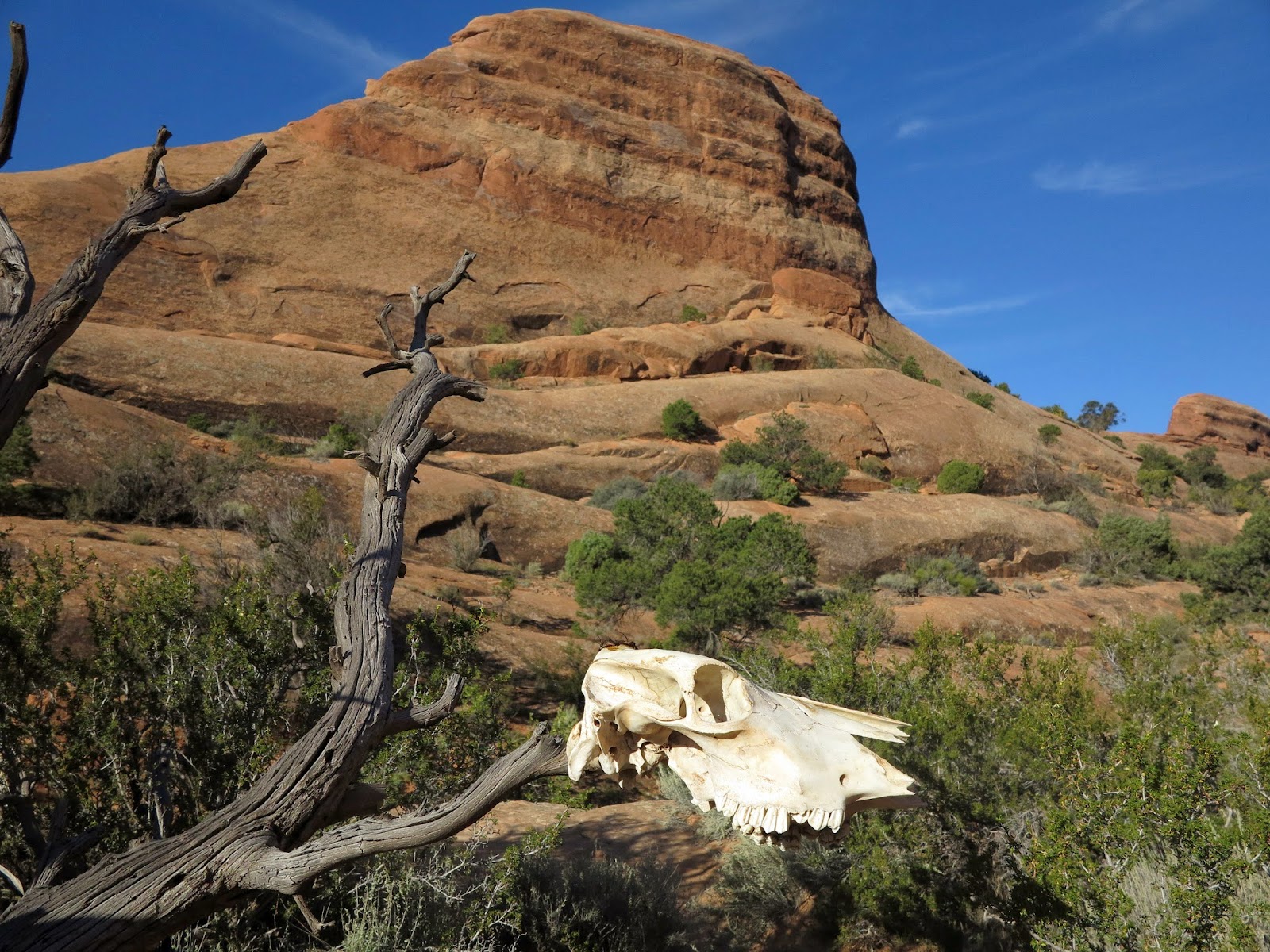 We followed along the wall of a large fin and turned the corner. There was Private Arch down below. Laszlo and Paul couldn't resist climbing to the top of the fin that held the arch. We climbed around the area for a few minutes and on the way out, we spotted a skull in the tree. Cow? Horse? Burro? We didn't know. We retraced our steps back to the main trail.

As we winded our way through the fins, we passed very few other hikers. Two girls stopped us and asked us to take their photo. They took the one below of us.

Right after that, we had to scramble over two or three very large fins. They were steep and slippery with minimal help from the park service! Another advantage of hiking in groups. We helped each other. 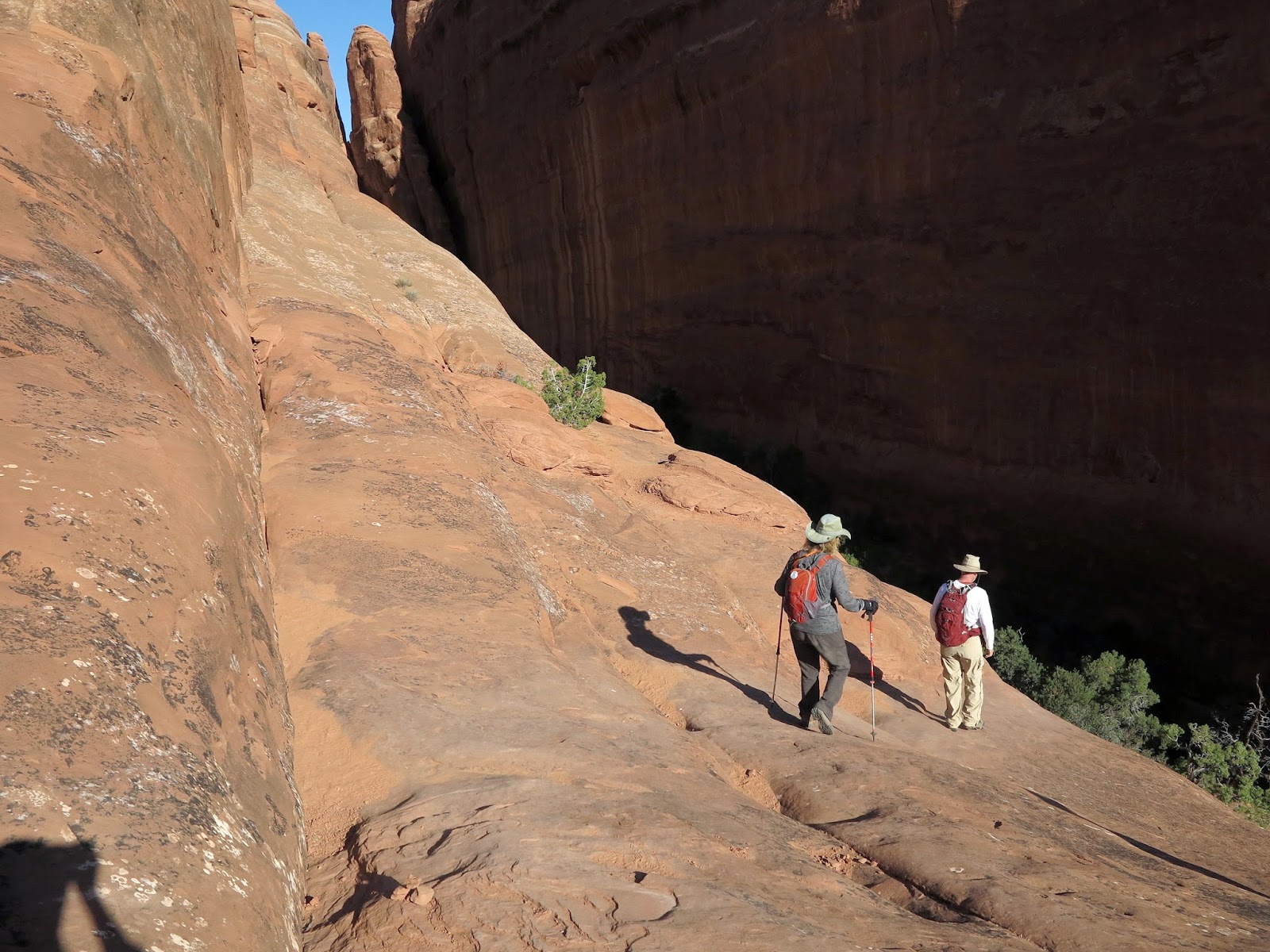 We continued hiking around corners expecting to find that water hole obstacle. There were a couple of up and arounds that didn't seem too bad. But, finally, there it was! Another couple were on the other side removing their shoes and socks. Other options were "up and over slippery bald rock on the left" and "up and over cliffy rock on the right." The other group had suggested that the right was not as bad as it looked. We eyed all three options as the man across the pond waded through the chilly water.

Everyone began tackling the left side. (Right in the pic below.) Getting up the rock was difficult and, at least two hikers slipped on their first try.

Kay took the lead of the man who had waded through. Off came the shoes and socks! Wow! My feet felt sooo good after that little trip through the water! 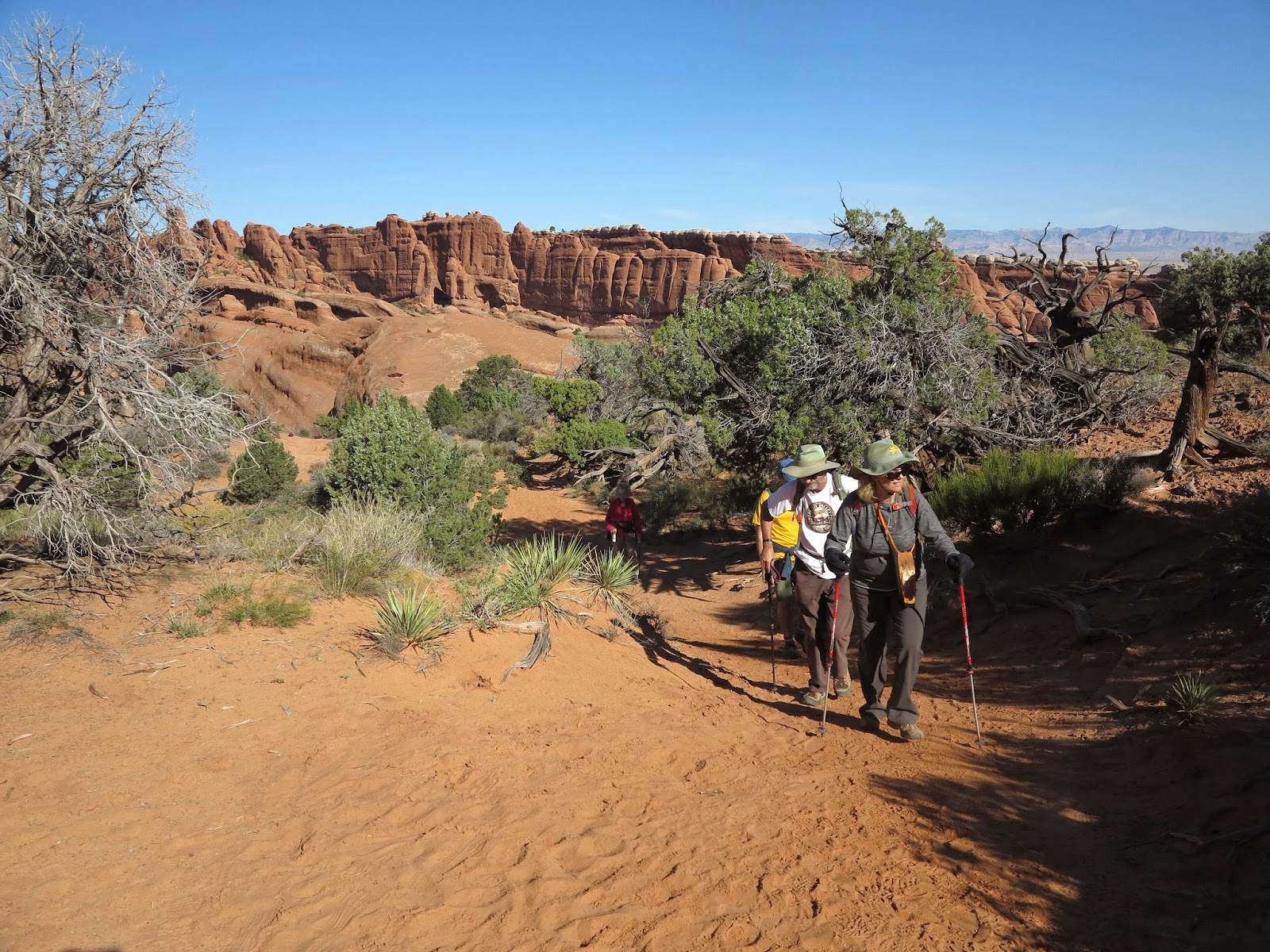 After that, it was a simple matter of climbing up from the low point of the loop. Leaving the fins behind us (appearing like a city skyline), we followed cairns back to the main trail in the vicinity of Landscape Arch. On the way back to the cars, we visited Pine Tree Arch and Tunnel Arch on spur trails. Great hike! 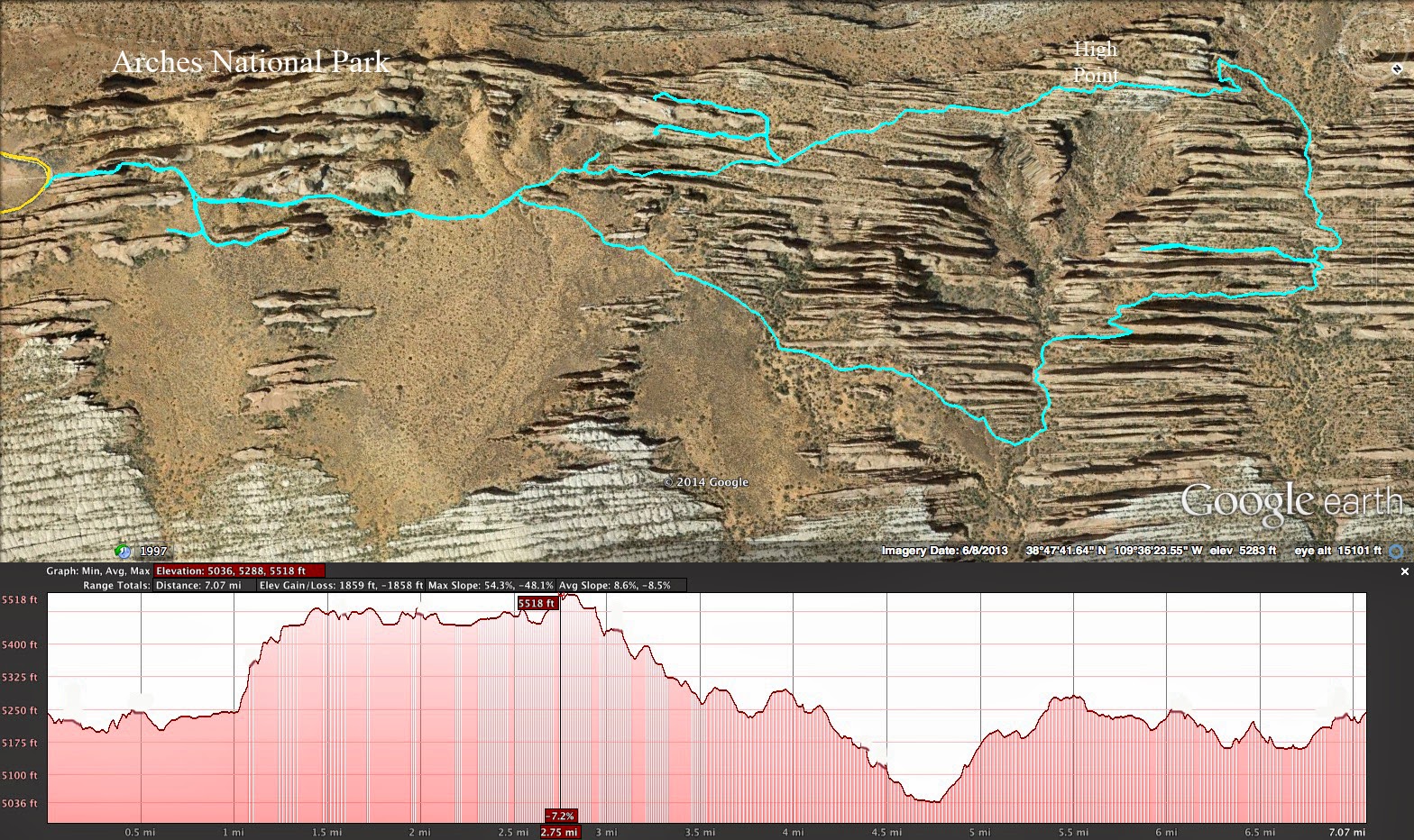 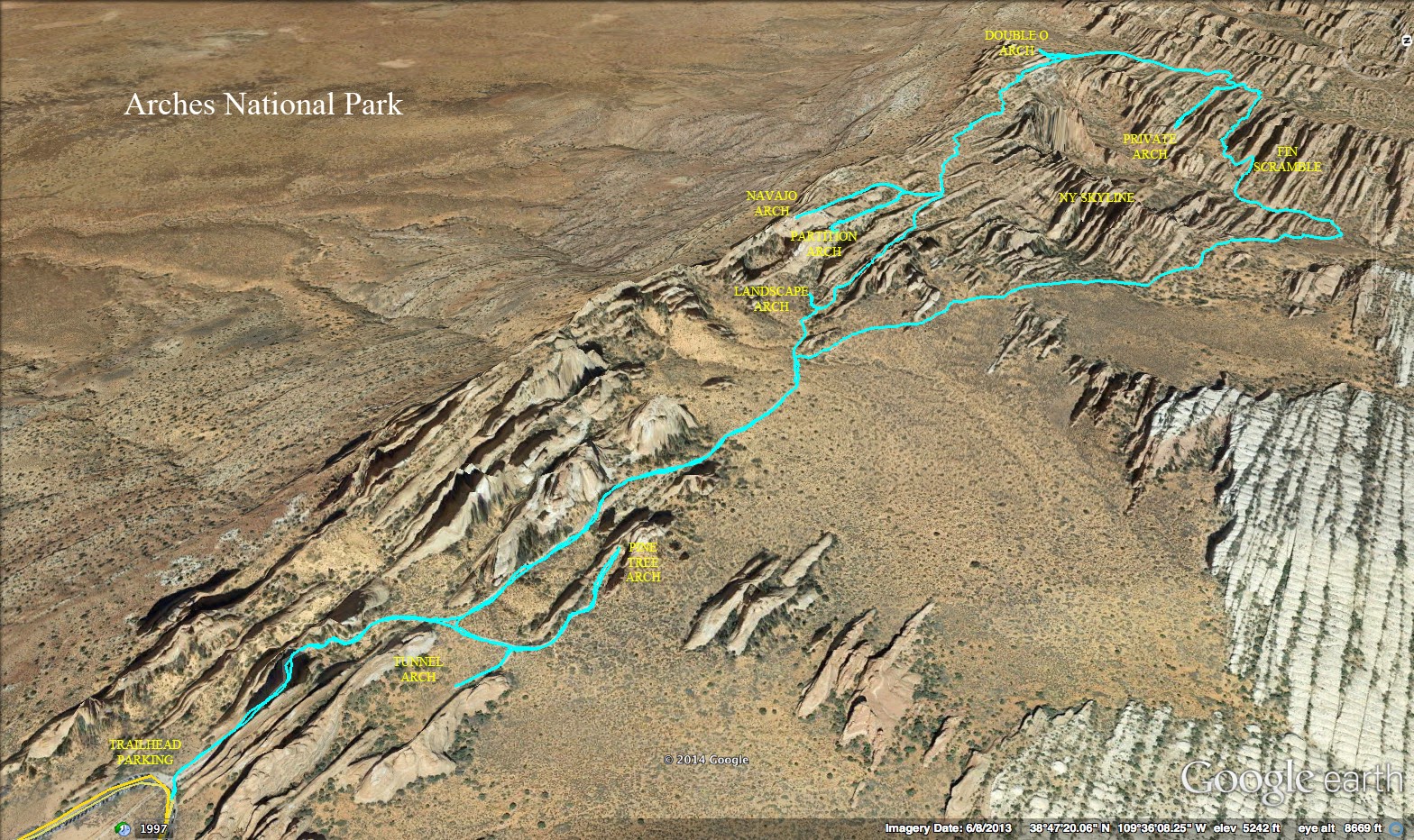 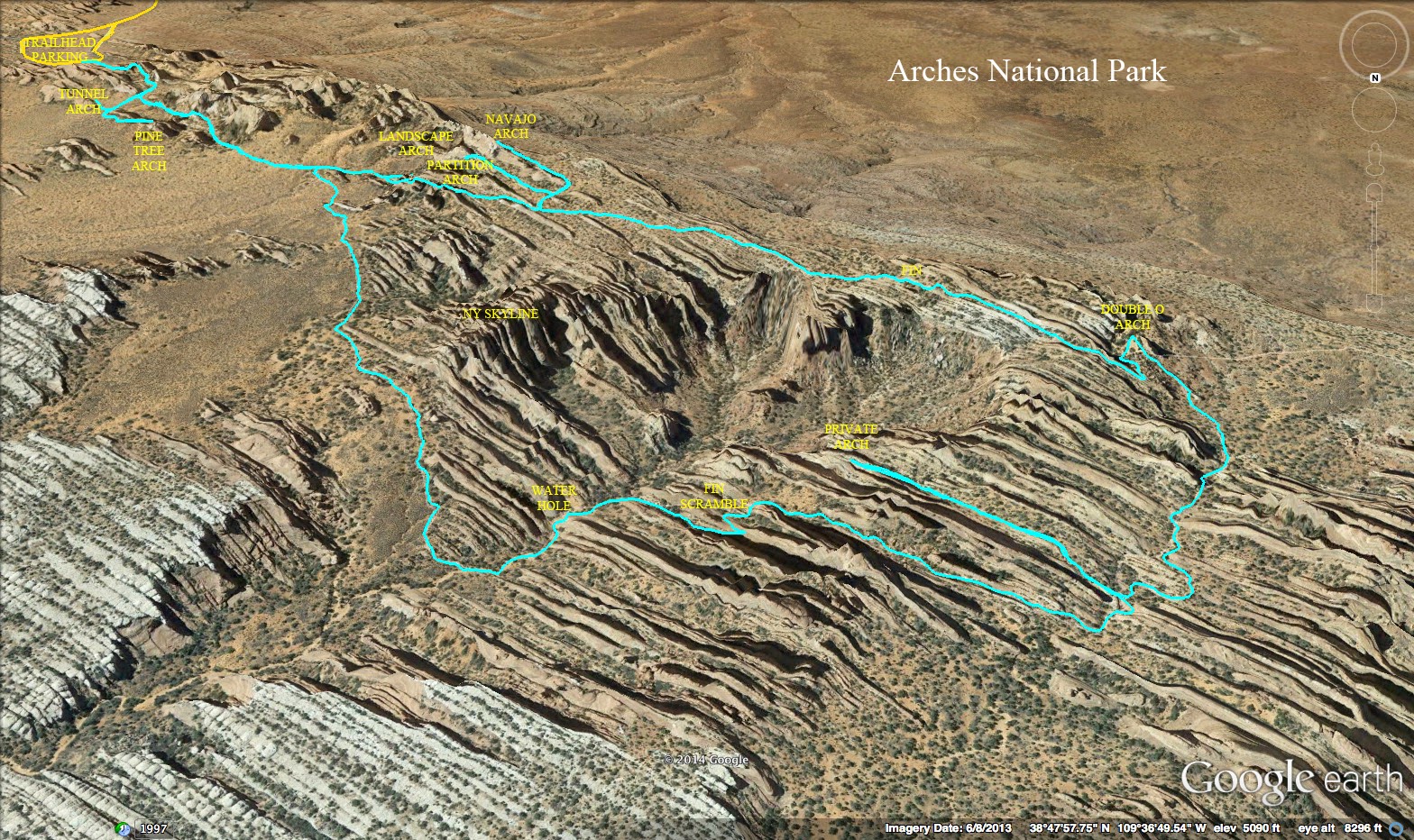