Near the White Rock Canyon / Arizona Hot Springs trailhead parking lot, there are many slot canyons that have been created by the drainage down from Mt. Wilson and its range of mountain peaks and ridges. The hike route for nine hikers today, explored a few of these slots. We parked in the large paved lot and began hiking down toward White Rock Canyon. Just before we reached the Liberty Bell Arch trail junction, we turned to our right into a small slot and immediately began climbing small dry falls.

After a few fun dry falls, we came to an especially difficult dry fall that only two of our hikers were able to climb up. The rest of us took an up and around route to our left then dropped back into the same slot. 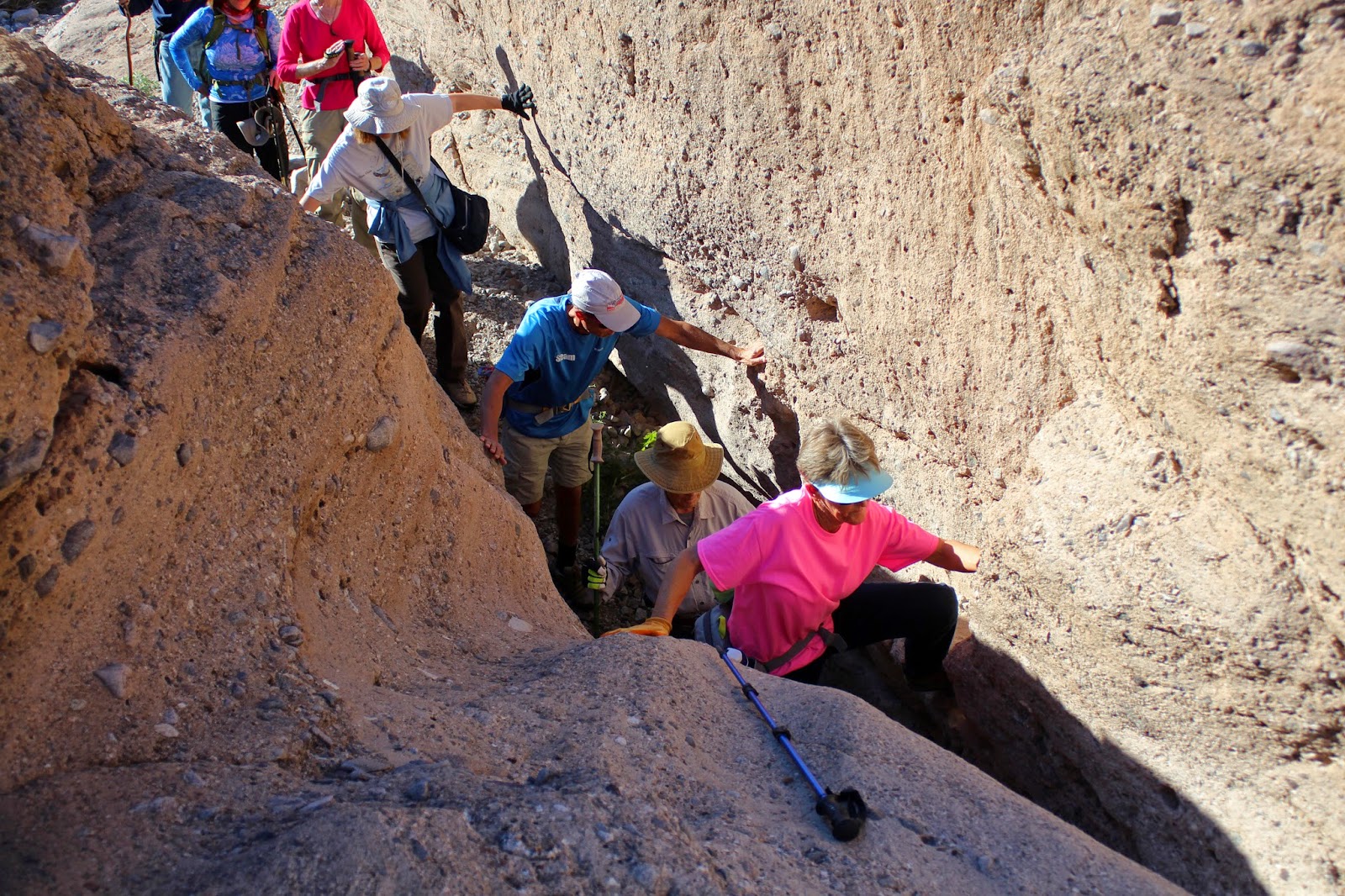 We continued up the slot still finding small fun dry falls to climb. The conglomerate rock that the walls were made of were tightly knit with ancient mud. We crossed the rarely used Liberty Bell Arch Loop trail then the slot became a bit brushy. We ducked under one large catclaw bush then came to another one that reached from one side of the slot to the other.

A couple of the hikers pulled back the thorny bush for the rest of the group to go by.

At the end of the slot, we climbed out to the right side on a hard surfaced wall and found the cement culvert that ran under Highway 93. It appeared to be quite dark and we had one headlamp among us. 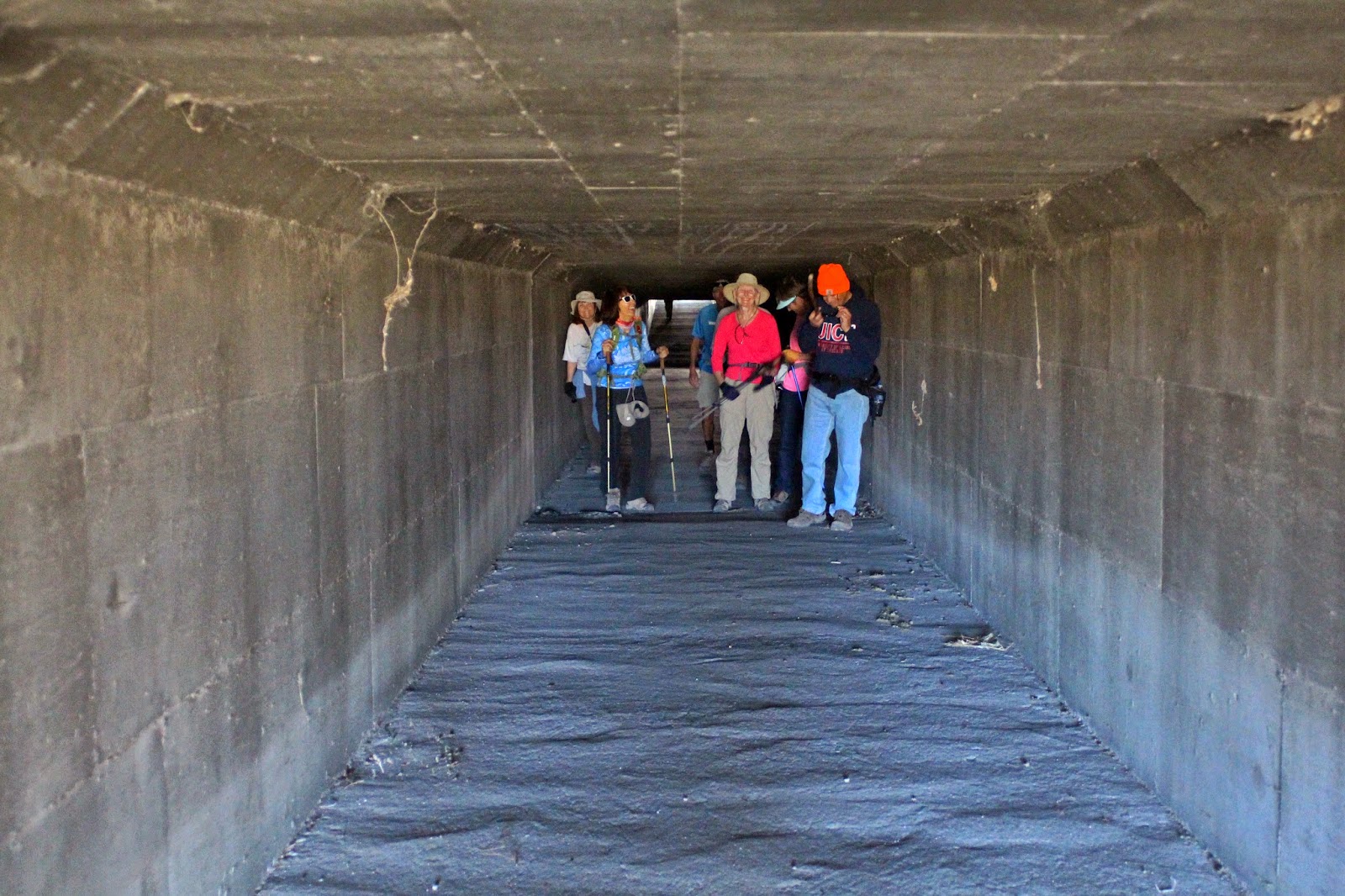 Once we were inside the culvert, we could see pretty well. It was free of brush and animals. In the photo to the left, the group was laughing since a few of them still had their sunglasses on and were wondering why it was so dark! On the other end of the culvert, we found ourselves right at the entrance to Little Spooky Slot. We entered the slot for an exploration. Many of the group had never been in this slot before.

There are a couple of side slots within Little Spooky. We checked out both of them. There is also a very interesting arch formation over the entrance to one of the side slots.

We hiked all the way to where it dead ended at a ten foot dry fall then returned to the entrance. We made a U-turn to our left and began hiking up on the ridge above the slot. 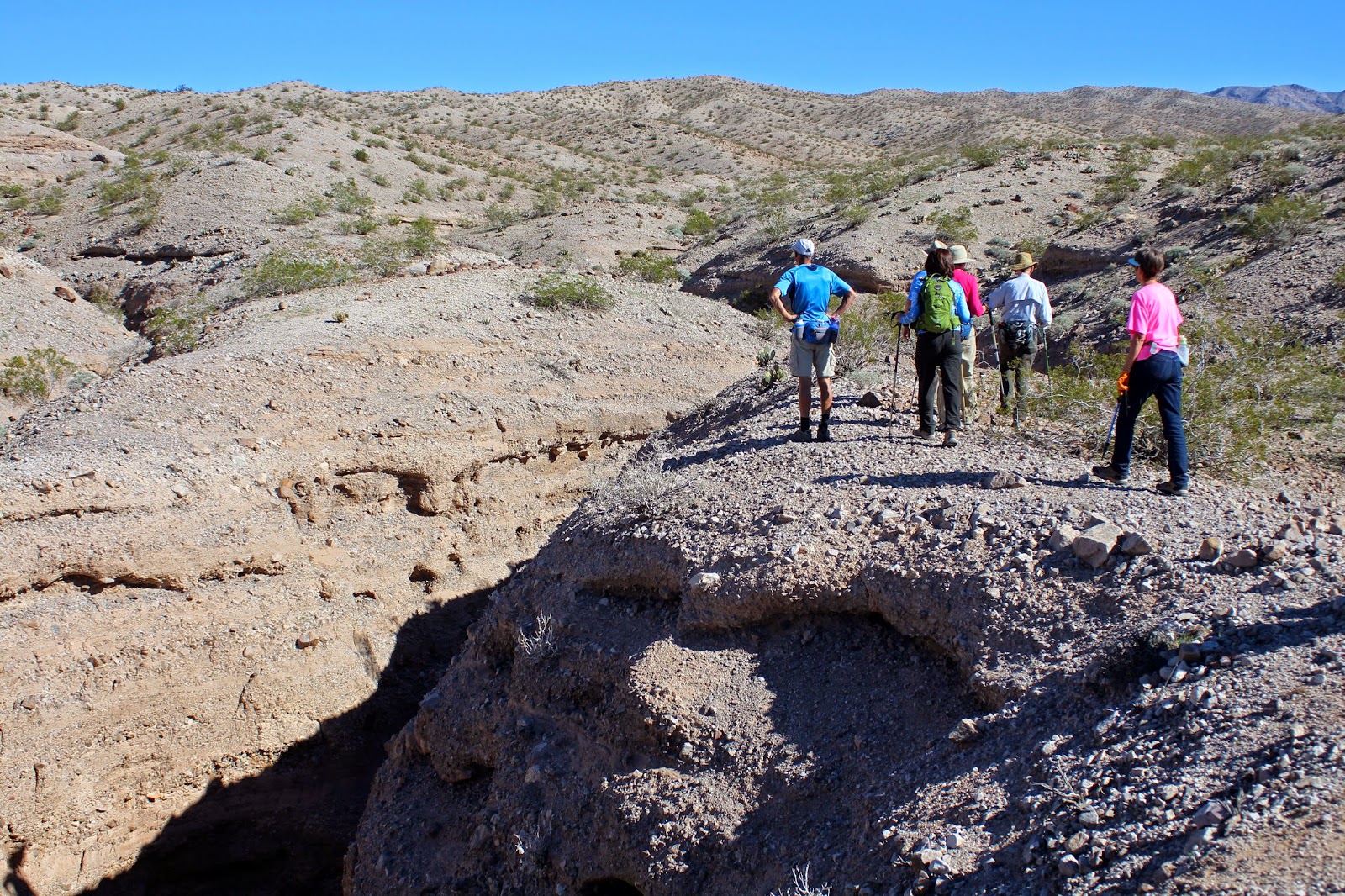 There was a small trail that led us up to the high point on the ridge. We took our break here with views of Mt. Wilson and Liberty Bell Arch. After the break, we followed another ridge down to another slot canyon and turned left. Another exploration ensued. Reaching the narrows (seen in the first photo), we noticed two ravens flying around inside the walls ahead. Suddenly, the ravens were flanking a desperate white owl on its escape down through the slot toward us. No time for photos but an incredible display!

Our exploration continue up through the slot until it neared the ridge above. We had to go under two large chock rocks on the way. One of the rocks was only held up by a much smaller rock so we hurried under this quickly! (See one of the photos below.) 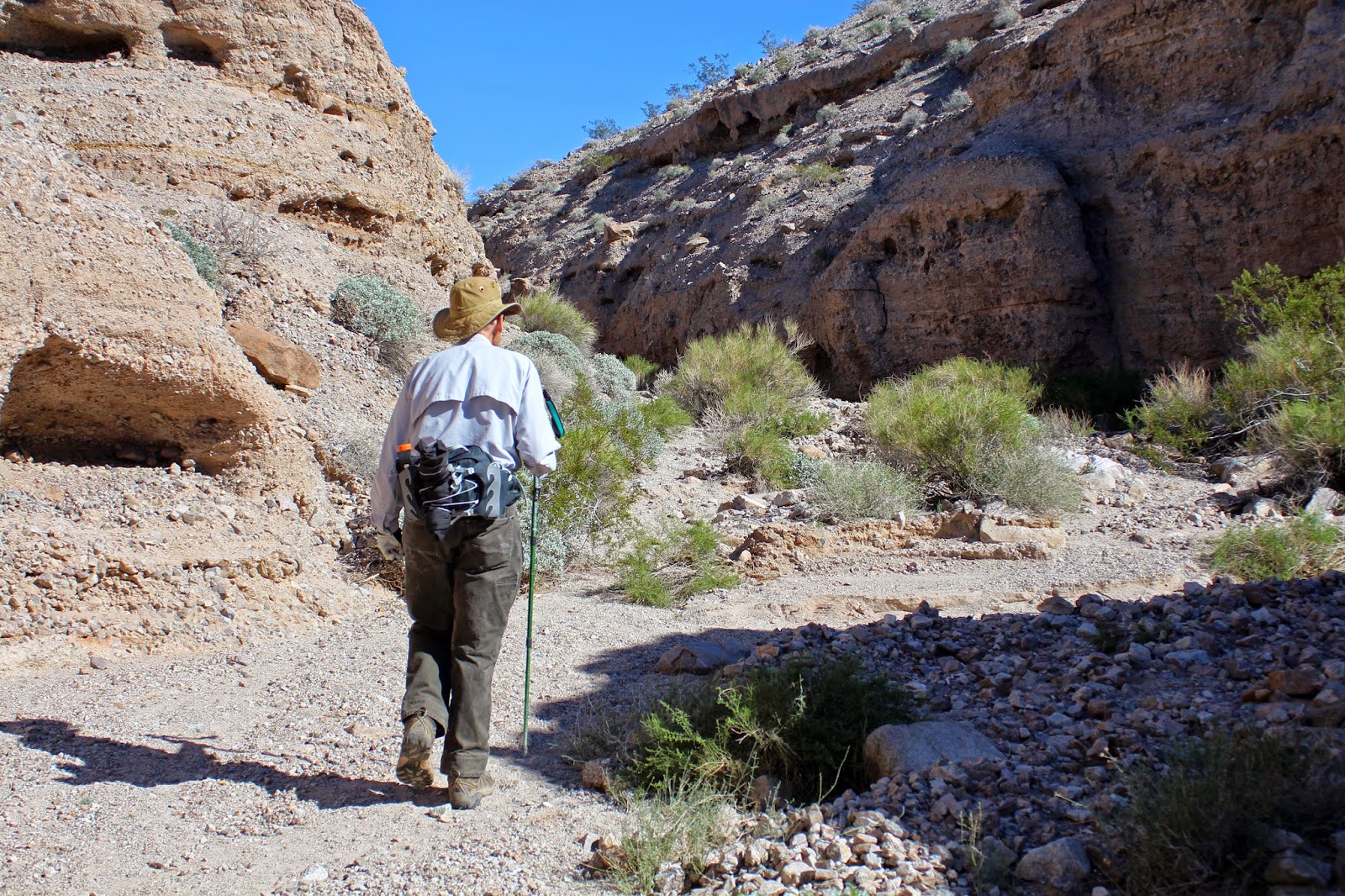 There were a couple of side slots here, too. We explored them then returned to the place we had dropped in. Continuing down the canyon, we hiked through a skinny part and then spilled out onto Horsethief Canyon Road. Taking a right on the road, we returned to the cars. There are so many slots to explore in this area that it is possible that many variations of this hike could be done. For a warm day like today, these six miles were enough. We shall return! 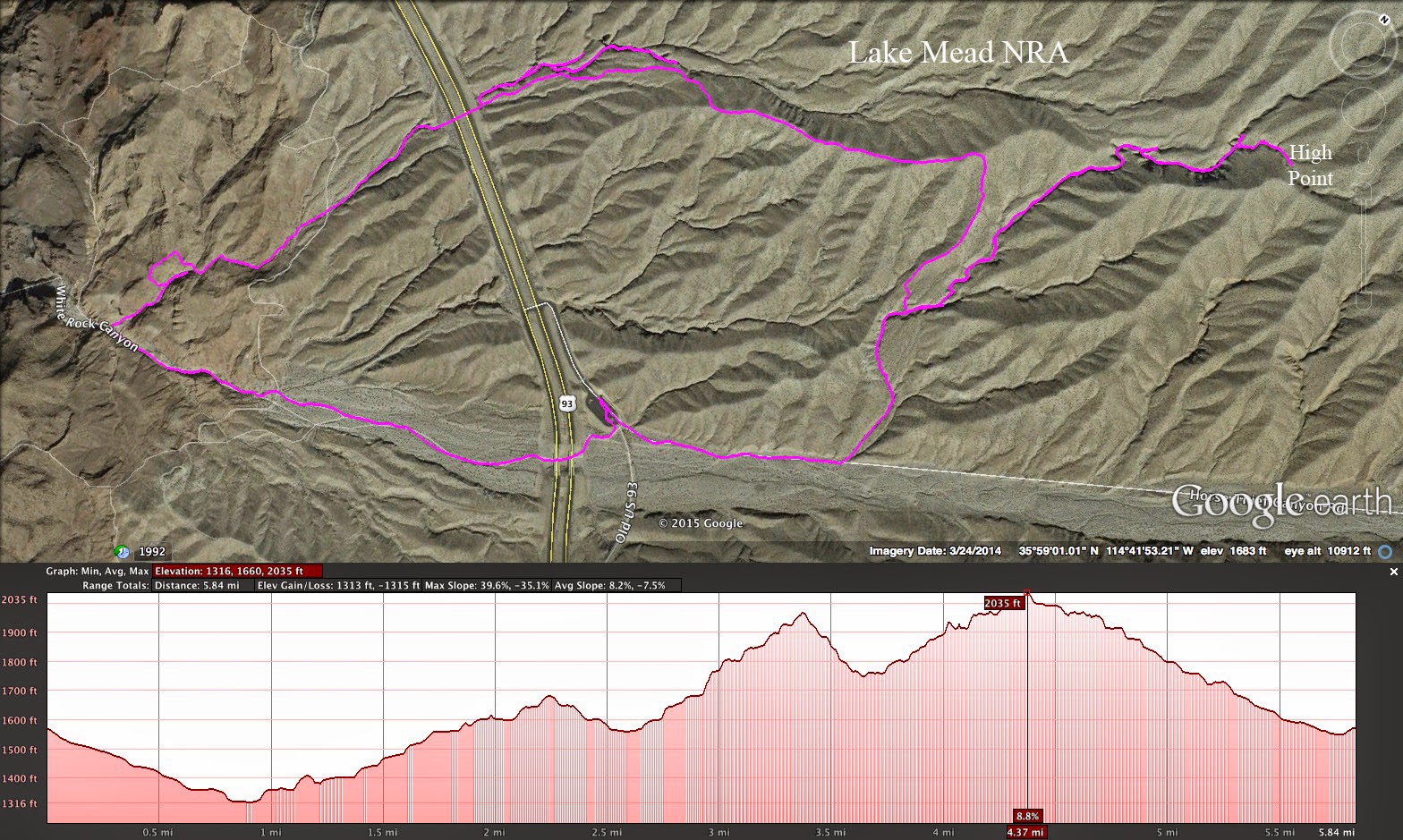 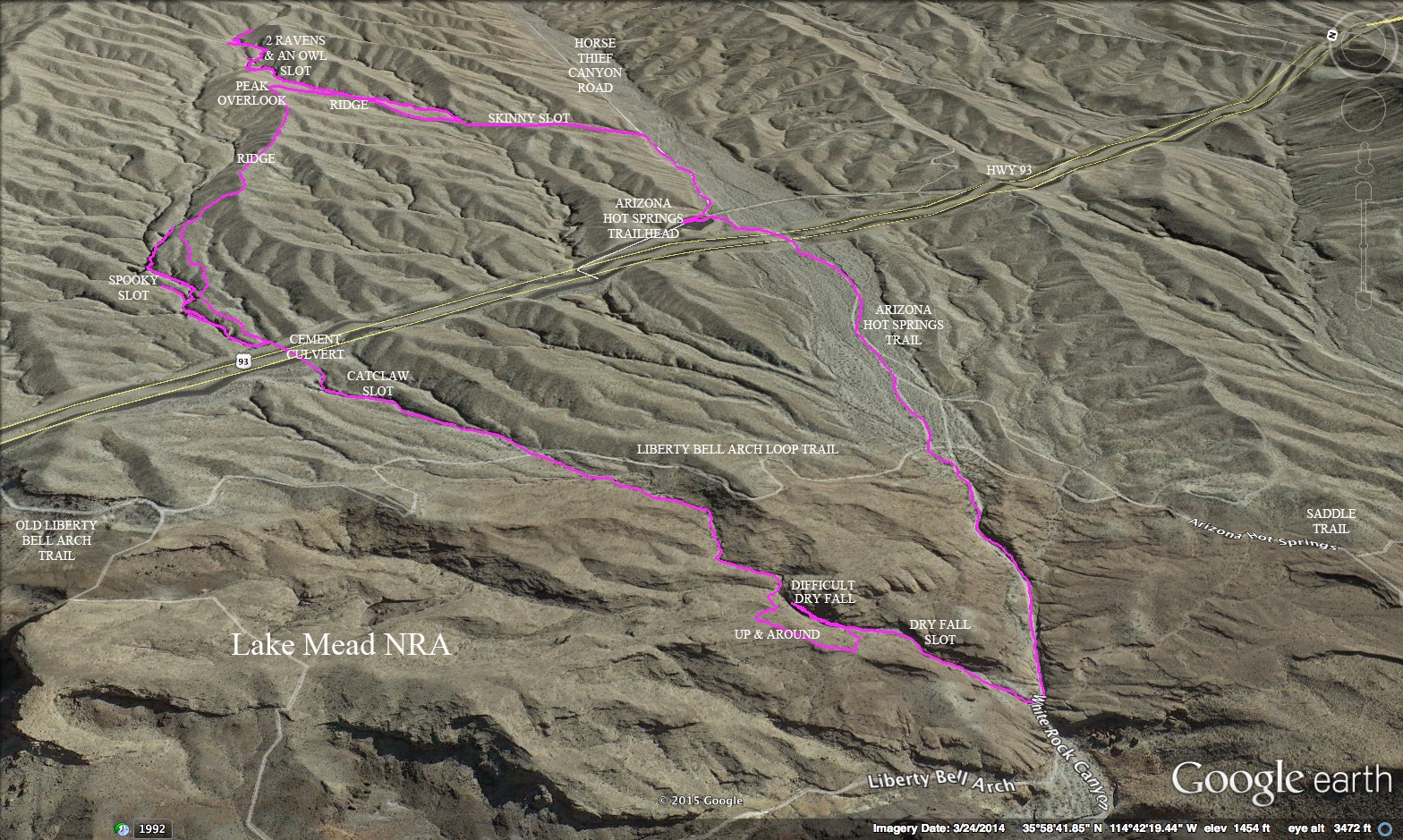 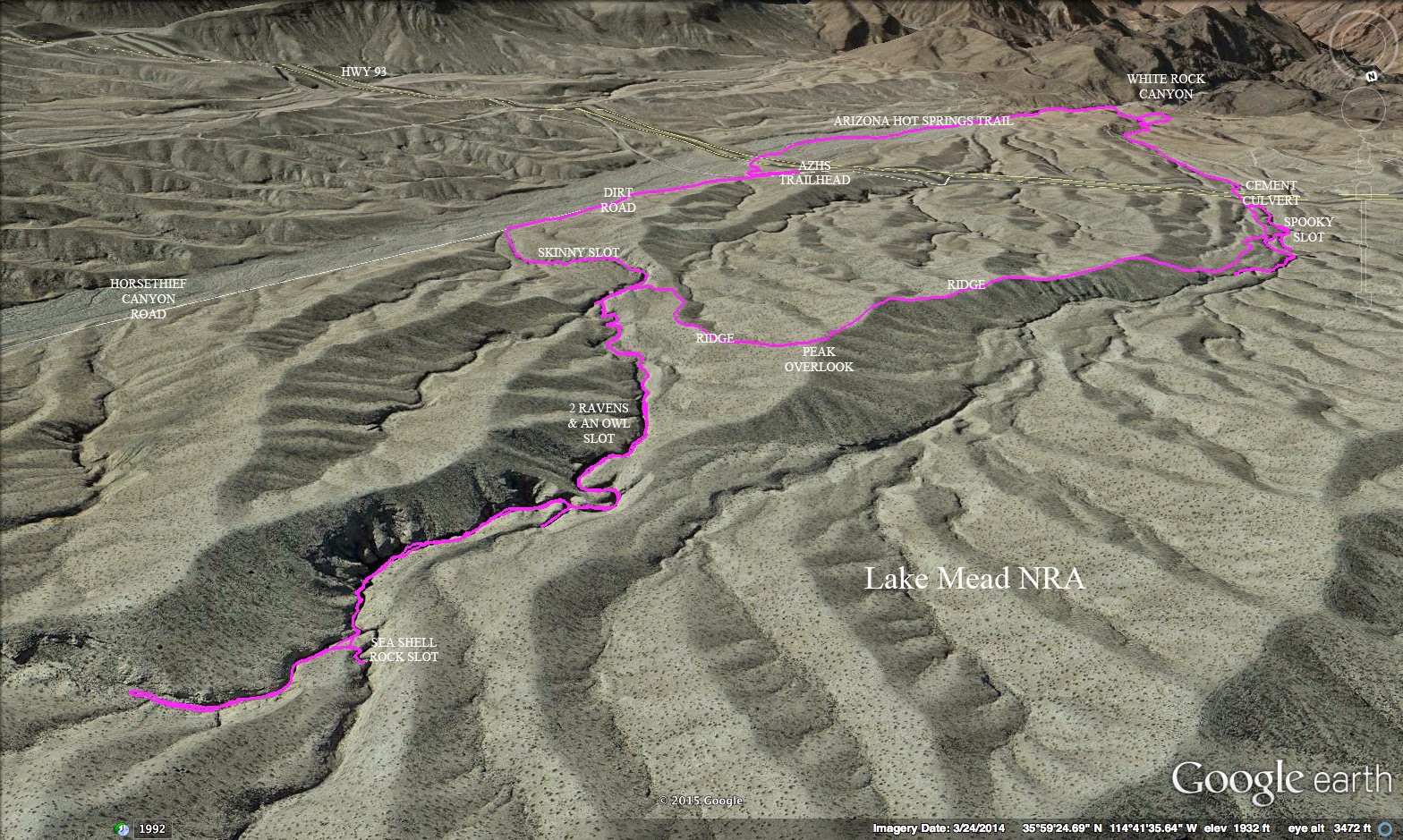