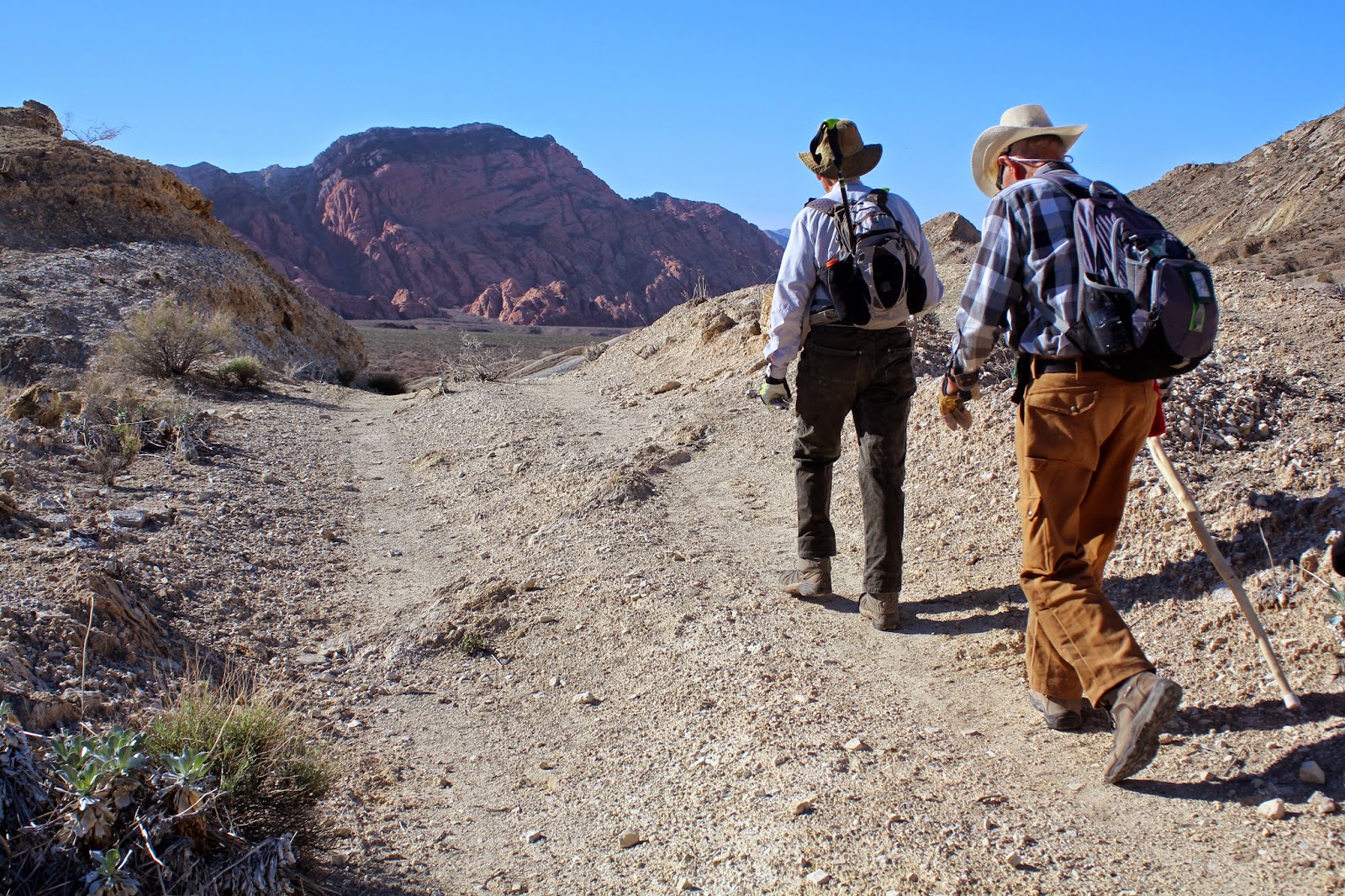 Pinto Valley is found in the Lake Mead National Recreation Area running between mile markers 18 and 25.5 of Northshore Road. Today, we explored the east end of it as an out and back hike. Eight hikers parked at the MM 25.5 turnout, crossed the road and hiked down to the guardrail. Here, there is a small trail that leads hikers over to a section of the old Arrowhead Highway. Although the road is in very bad condition, we noted that there are vehicle tracks seen for the first couple of miles.

After a little climb to the top of Heartbreak Hill, we dropped down the other side and began hiking half on the old road and half in the parallel wash.

Pinto Valley laid out before us with redstone lining the south side. White, yellow and red were coloring the northern range of limestone ridges. 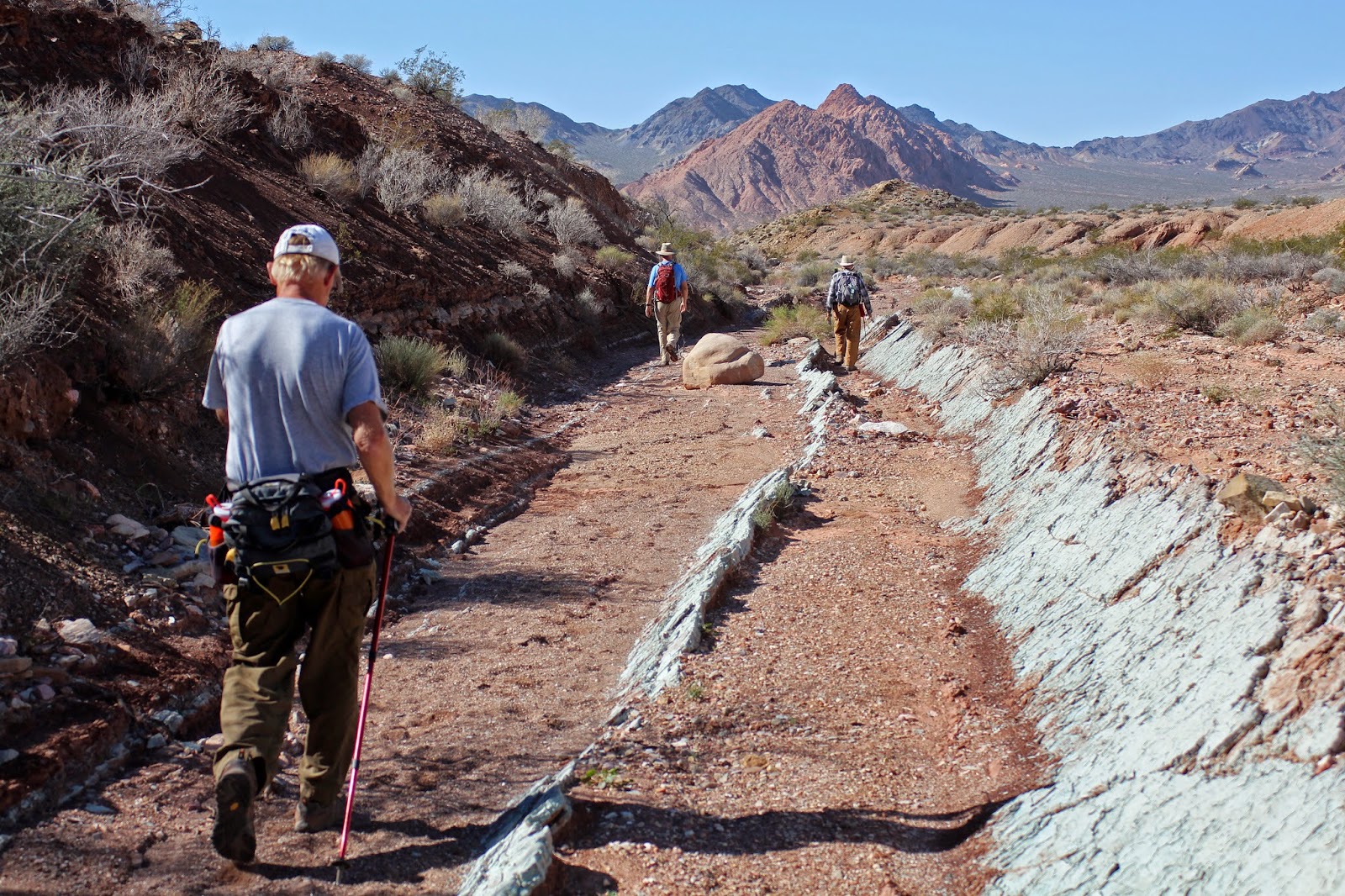 The hike on the road and in the wash was very pleasant. We happened upon a tortoise shell along the road and decided to stash it away for later viewing. As we neared the outlet that drained down to the lake called Boulder Wash, we passed through an unknown spring area. We named it Saltlick Spring for the crust of salt oozing up through the ground in this area. There is also a lot of grass and foliage in the road/wash here.

There were several bits and pieces of interesting things to remark on throughout the hike. After the first tortoise shell, we came upon a bighorn skull sitting on a rock.

One hiker decided the skull needed an orange hat! Surely, the bighorn was humiliated. 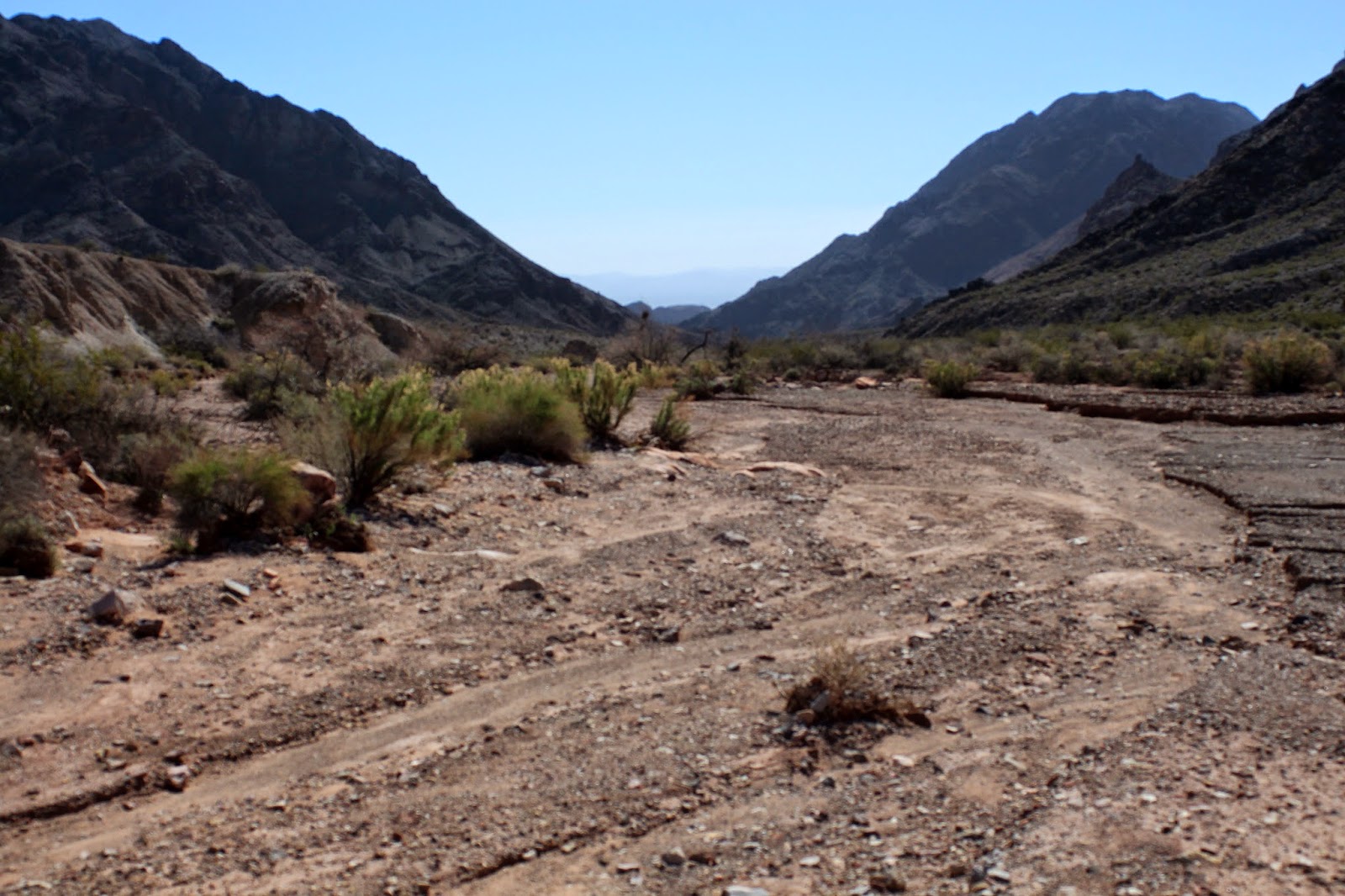 We passed the Boulder Wash turnoff to the left (seen in the photo to the left) then began ascending up the other end of Pinto Valley for a short way. We visited the site of a mining claim, found some petrified wood, then crossed over to the old Cowboy Camp. There are also several petroglyph sites near here. We surmised that there are probably many more petroglyph sites in Pinto Valley that we have yet to find.

At Boulder Wash, we spoke about some of the climbable mountain peaks in the area and how to get to them.

A park ranger has already taken away the papers inside this first mining claim. As we explored, we commented about the nice steady cool breeze on an otherwise uncharacteristicly warm February day. 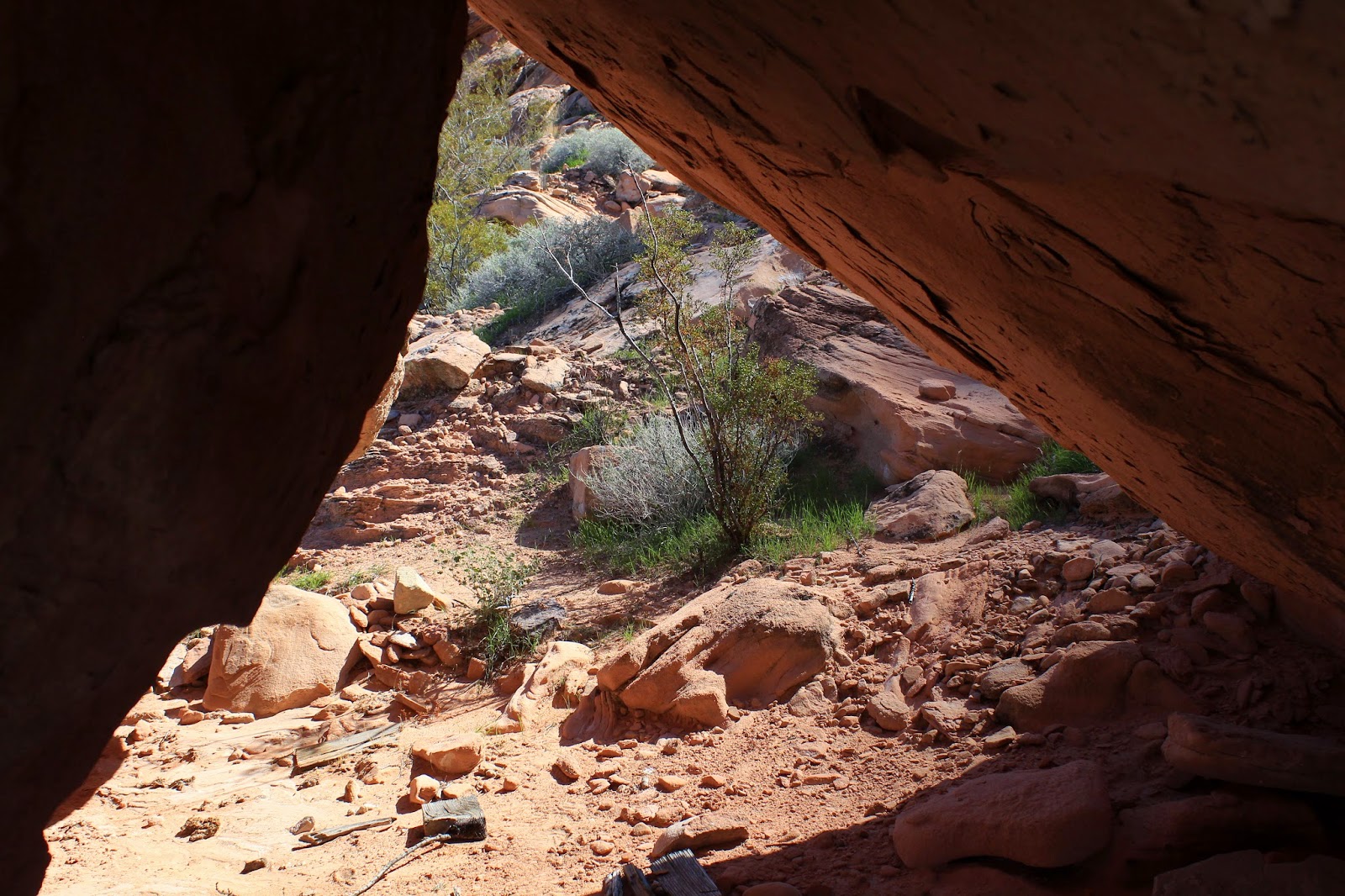 The Cowboy Camp consists of huge rocks that lean on each other to provide shade (as seen in the photo to the left). There is evidence of a bench and something built with lumber. A large rock with petroglyphs on it seems to be telling others the directions to the river down Boulder Wash. We had no idea what other petroglyph panels were trying to say!

The next point of interest was a large rock in the shape of a huge chair. We all had fun posing on the rock for the camera.

Next, we returned to the Boulder Wash junction and sat at some rocks for our break. There was just a tad of shade that we took advantage of. 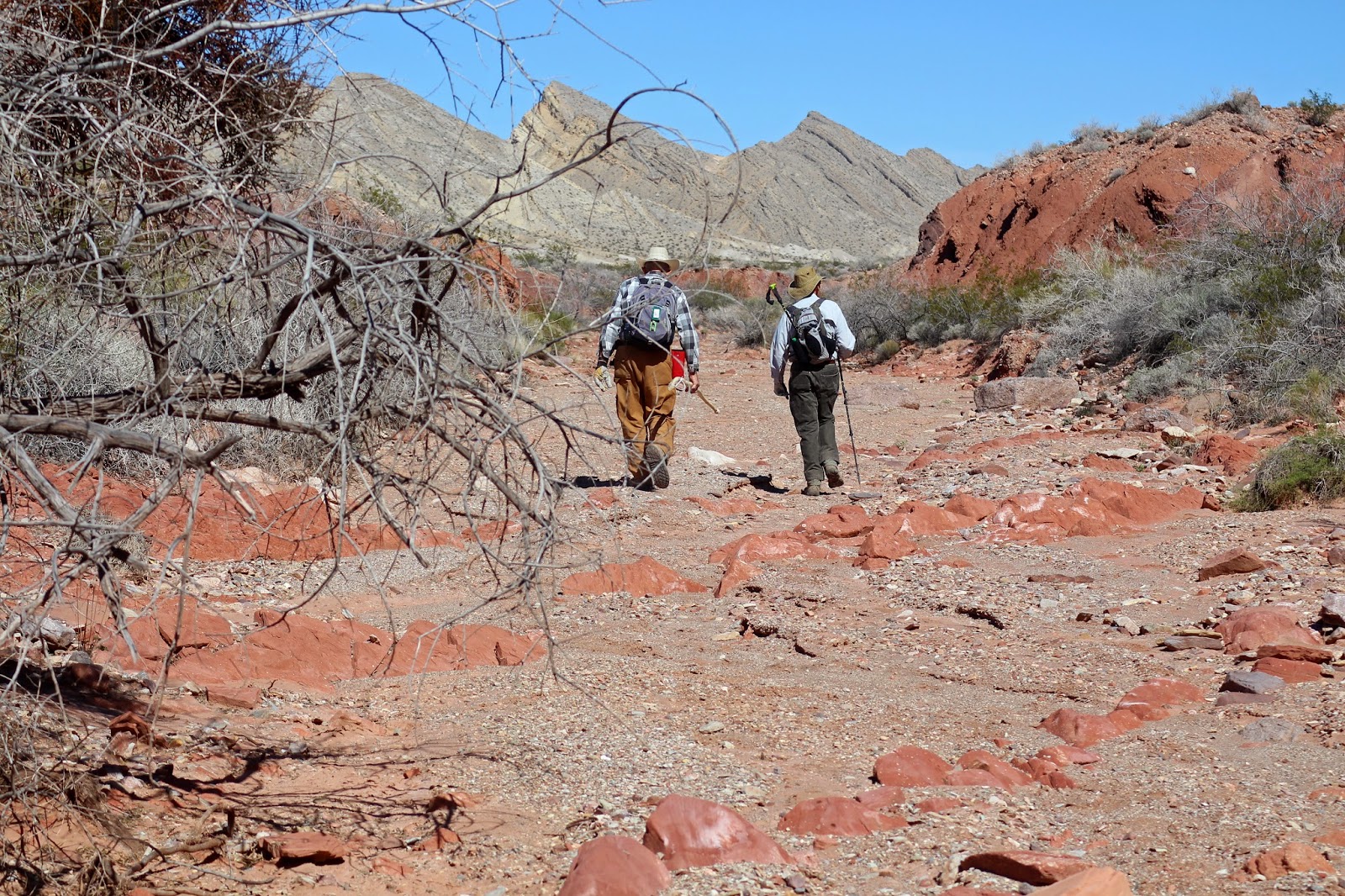 Upon completion of our break, we started back up the wash/road that we had come down. We passed Saltlick Spring and continued. The views were different on the return but no less awesome. Staying to the right side of the wash, we looked carefully for our right turn. We didn't want to miss the way to Sandstone Spring. Finally, we found the nondescript junction.

This junction is seen in the photo above. The best that the writer could tell was that the wash simply seemed to lead in the direction we wished to go.

This wash is brushy and small but there is a trail that gets hikers by the catclaws and leads you all the way to Sandstone Spring area. 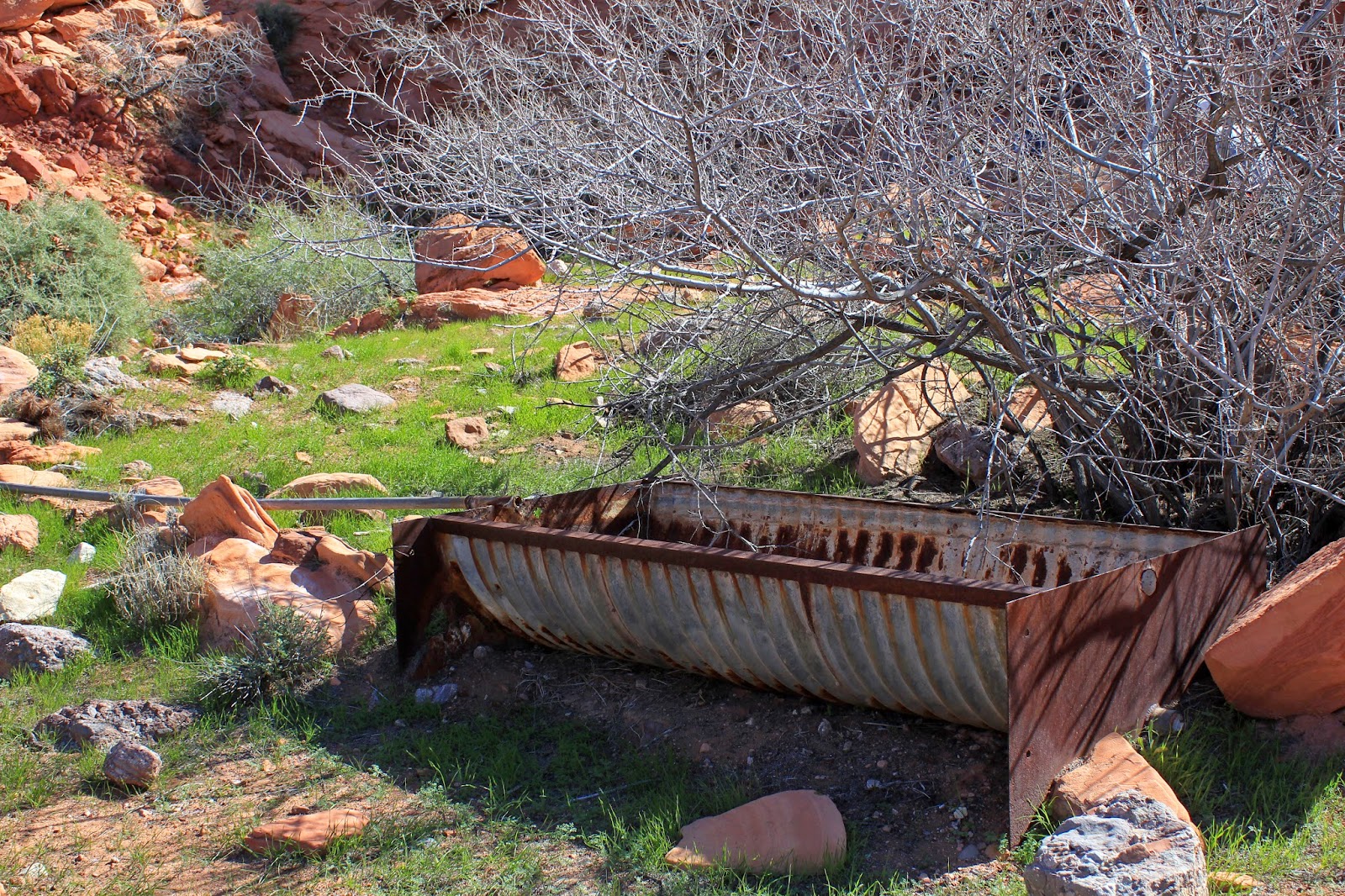 The first thing you see as you approach the red sandstone wall is an old water trough with a pipe leading from the spring. The pipe is probably clogged because it no longer carries water to the trough. Nearing the wall, we noted the dry fall pouring down into a small puddle of water about ten inches deep. Looking closer now at the area, we found several interesting things.

A small cat print approximately two inches in diameter could be seen in the sand. There were two sets of bighorn vertebrae in the bushes. And, some sort of larvae (perhaps mosquitos) were swimming in the spring water.

After a short break in the shade here, we climbed out of the area on a small trail to the east. We were now in search of a mining claim that we had originally found in 2011. 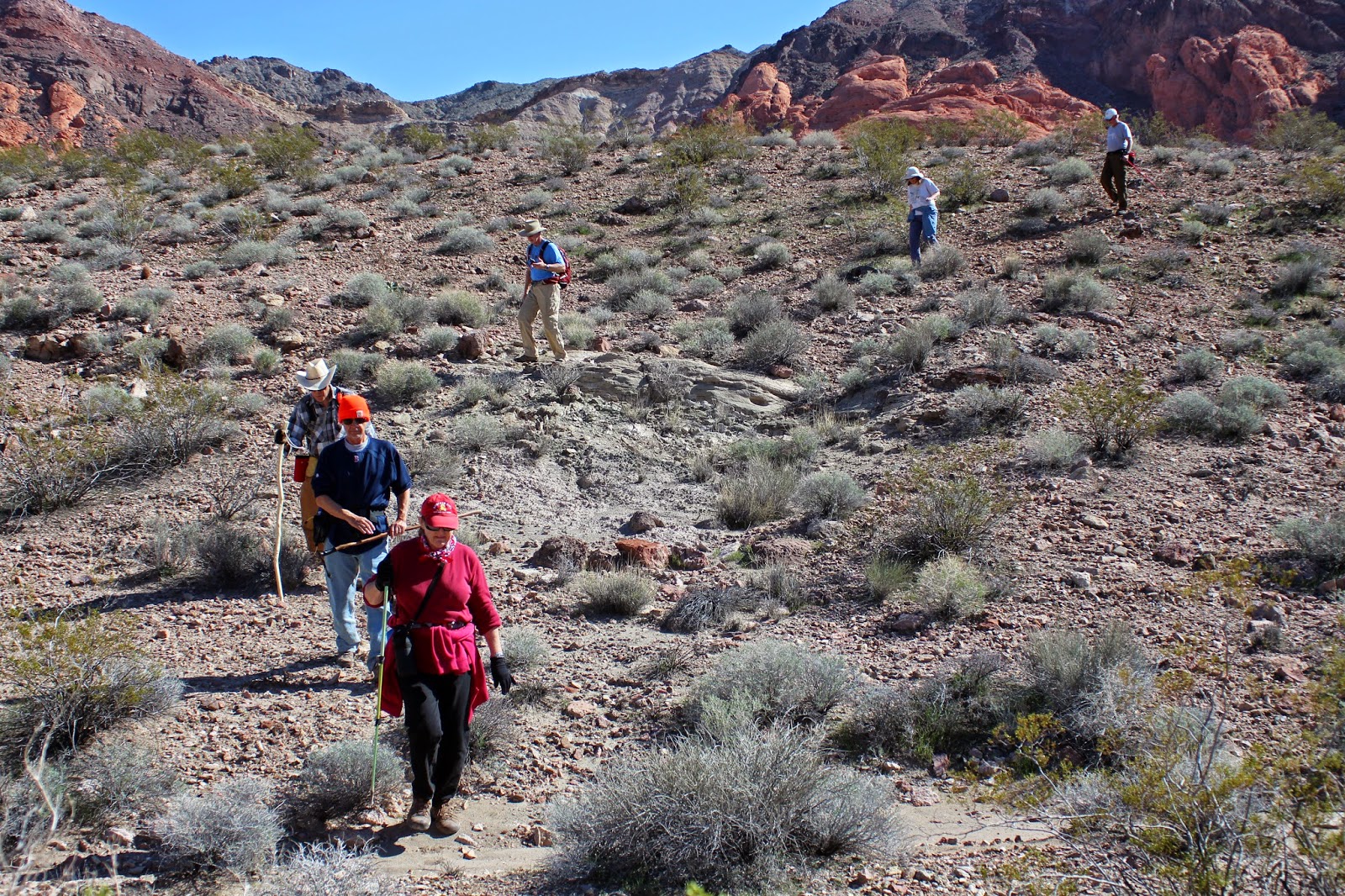 With the help of a GPS waypoint, we found the claim and the papers were still in the canister. They were very fragile so we were very careful with them. So interesting! From there, we crossed the desert over to the old road that we had hiked out on. Through the washes and up Heartbreak Hill, we hiked. Still happily conversing, we got back to the cars with eleven miles done. Great day in the desert! 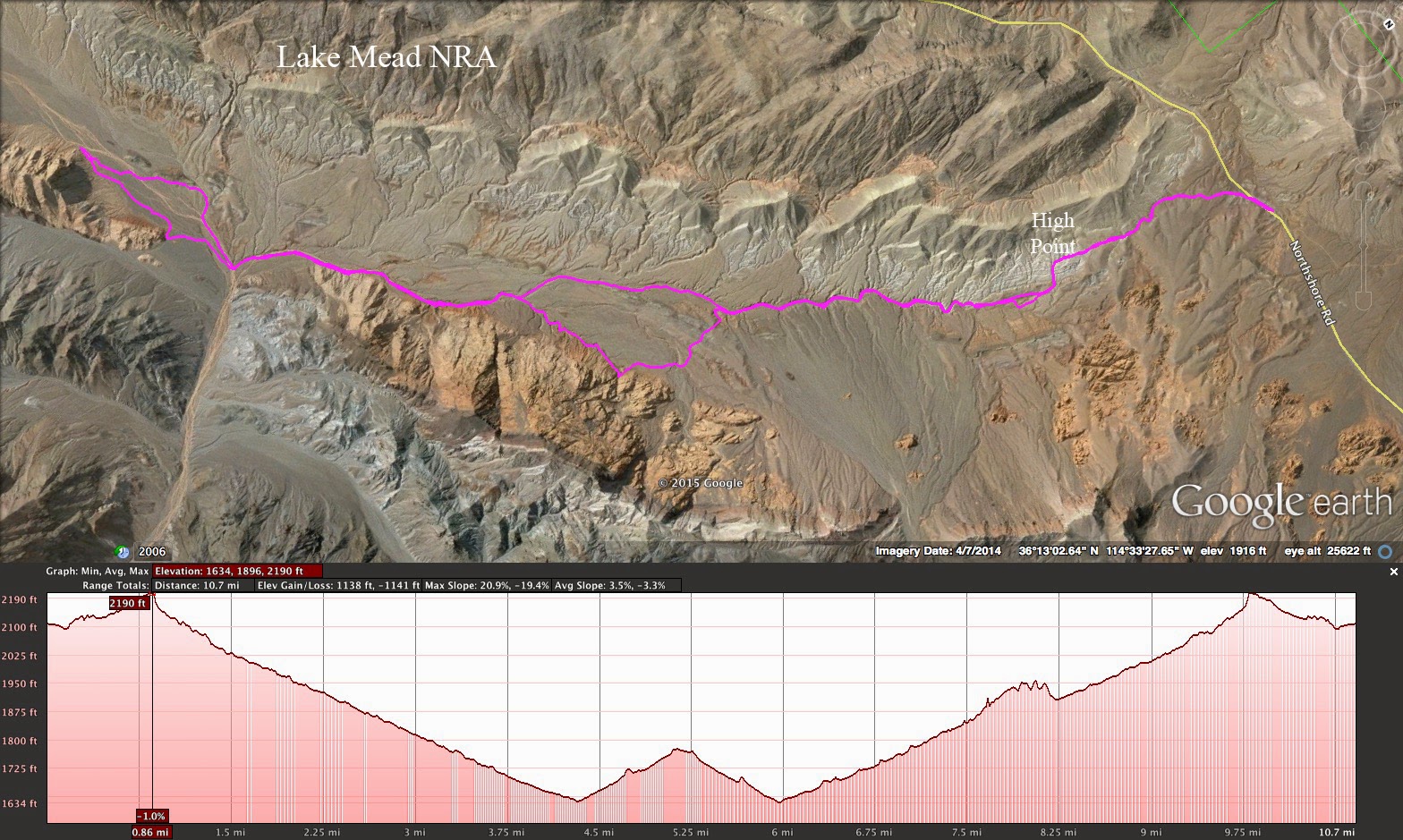 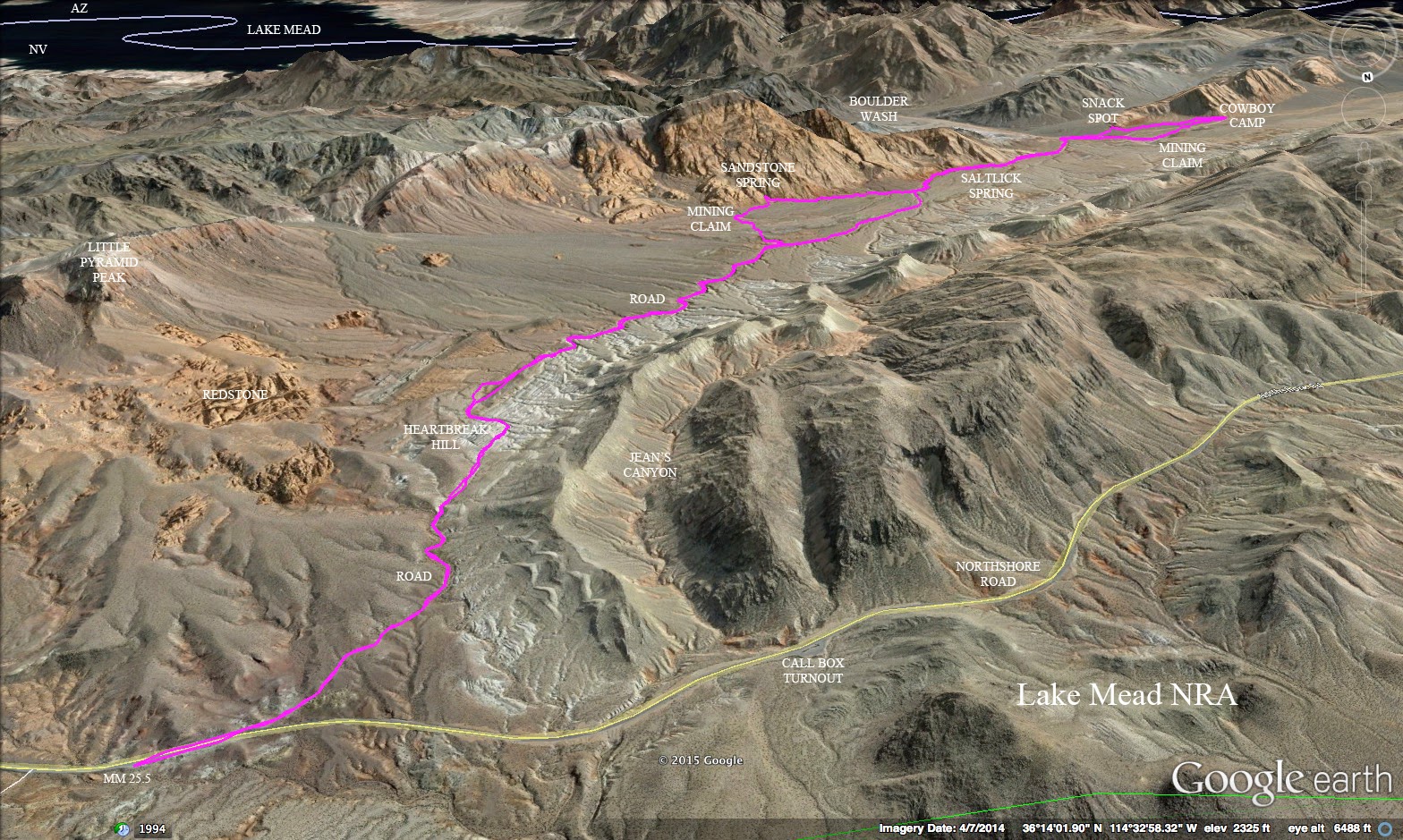 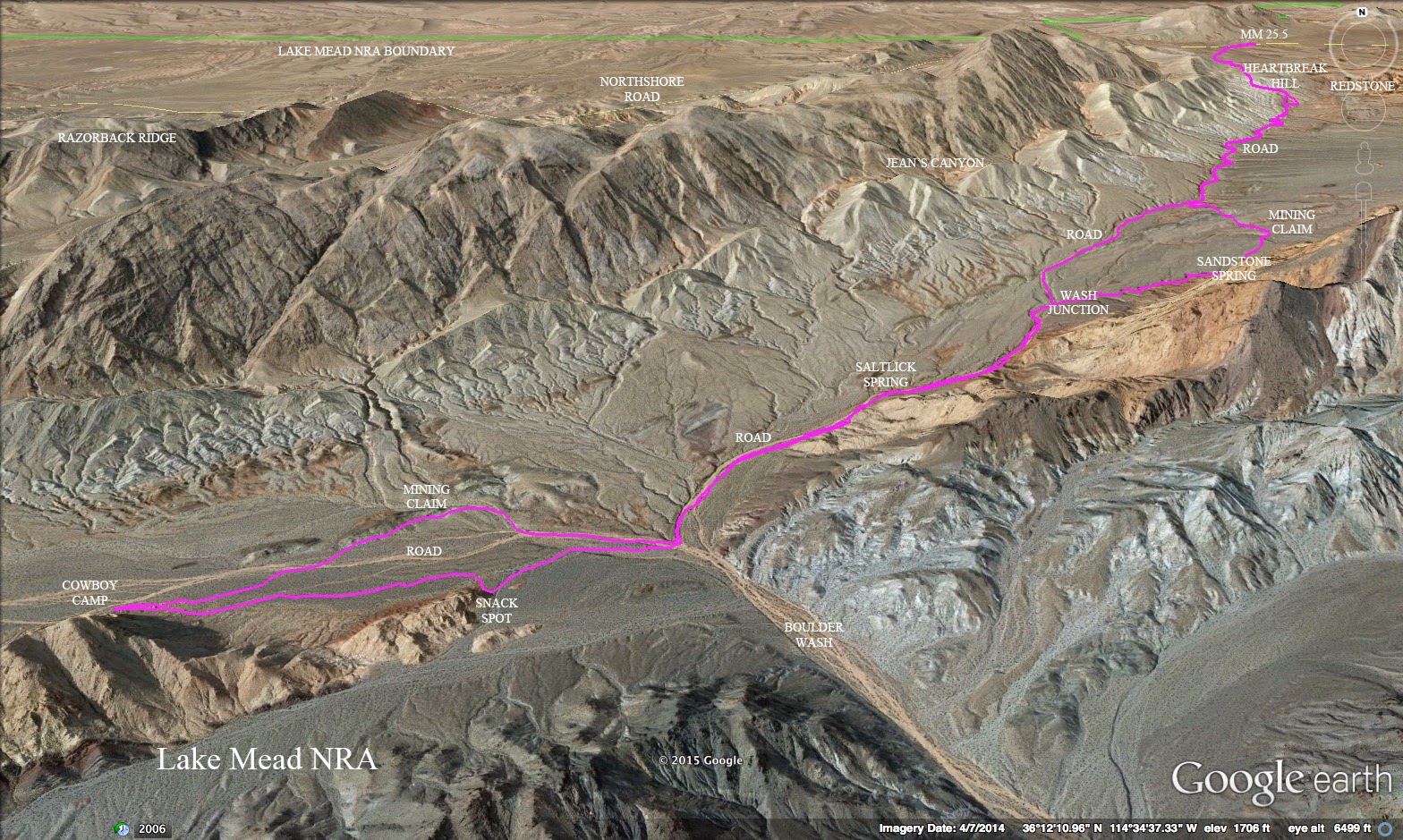