Mountain Spring Peak rises up behind the limestone line of the Red Rock escarpment at  Black Velvet Peak. The most common route used to reach this highest point on the southern half of the escarpment begins at the wooded trailhead located at the Mountain Springs Pass on Highway 160. With the promise of a somewhat slower climb up Heartbreak Hill, fifteen hikers showed up. We promptly began our climb that included a few stops along the way. Heartbreak Hill is a mile long with 1000 feet of elevation gain. Quite a waker upper.

As we climbed, we noticed that there were several claret cup cacti in bloom. We would see these red flowers all the way up to the peak.

As we waited on the saddle to catch our breath, someone spied three mule deer disappearing over the ridge heading out to Hollow Rock Peak. But, not before we captured a photo or two. Here, we also noticed that some animal has been eating the green stalks off of the Utah Agave in the area. Hmm.


The next leg of the hike took us around the rim of the Grapevine Springs Canyon below. We still had a lot of climbing to do before we reached the Windy Peak / Mountain Spring Peak fork. As we passed, we saw this succulent plant next to the trail. (See photo to the left.) Very interesting. We have no idea what it is! Finally, we got up to the fork where we turned to the left. The fork is marked by a very large pile of rocks in the middle.

There is also a new age chair inside the forked trail. Setsuko demonstrates above!

At this point, the trail flattens out a bit. It was a welcome change as we circled around to the escarpment rim. On the right side, Black Velvet Peak was in our face. On the left side of the ridge, we could see Mountain Springs, NV below and Mt. Potosi beyond.


The trail climbs from here up another steep hill. (The trail to the right fork is not as worn and you, eventually, have to climb up anyway.) After a little more undulations, we found the peak which is marked by a survey marker and a large cairn with a log book inside of it. We all signed the book, took a few photos, then continued down the escarpment rim trail a way.

This part of the rim hangs high above Black Velvet Canyon on a cliff. The views are outstanding.

We dropped quite a bit as we passed by the limestone cliff formations. Finally, we arrived at a familiar snack place on the ledge.


We began our break and, suddenly, someone exclaimed, "Bighorn!" Up to our left, further down the escarpment rim, on a very high cliff, there it was ... no, there they were! Two bighorns had watch duty and they were checking us out. One stood tall and the other laid on the rock. As we watched, a large raven began harassing them. It appeared that the bighorns won because the bird finally landed at a place where he could just watch.

At the same time all this was happening, another hiker spied a small group of bighorns dropping down the ridge we use for the loop hike sometimes. All of these sheep were more brown in color than usual. Maybe it was the available light making them appear different.

We all checked out the small window below our perch but the sky was not clear enough for a photo like the one placed third in this entry.


The beginning of the hike back started with another climb, back up to the peak area. After that, the majority of the trail was a descent. We made good progress and stayed together pretty well as we waited when someone got too far behind. We saw at least 6 (3x2) other hikers on the way down. That's a little unusual for this trailhead. Great morning! 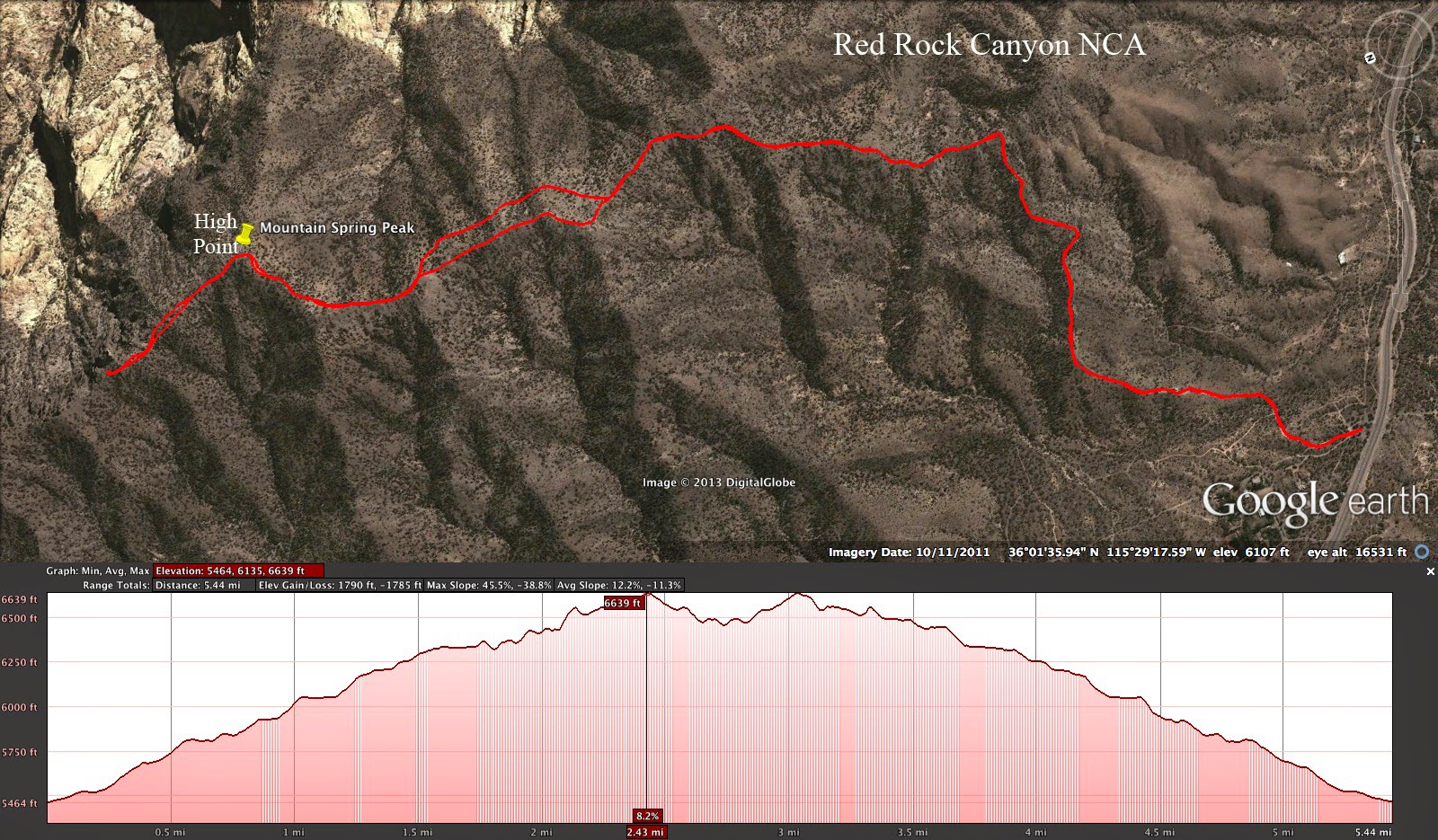 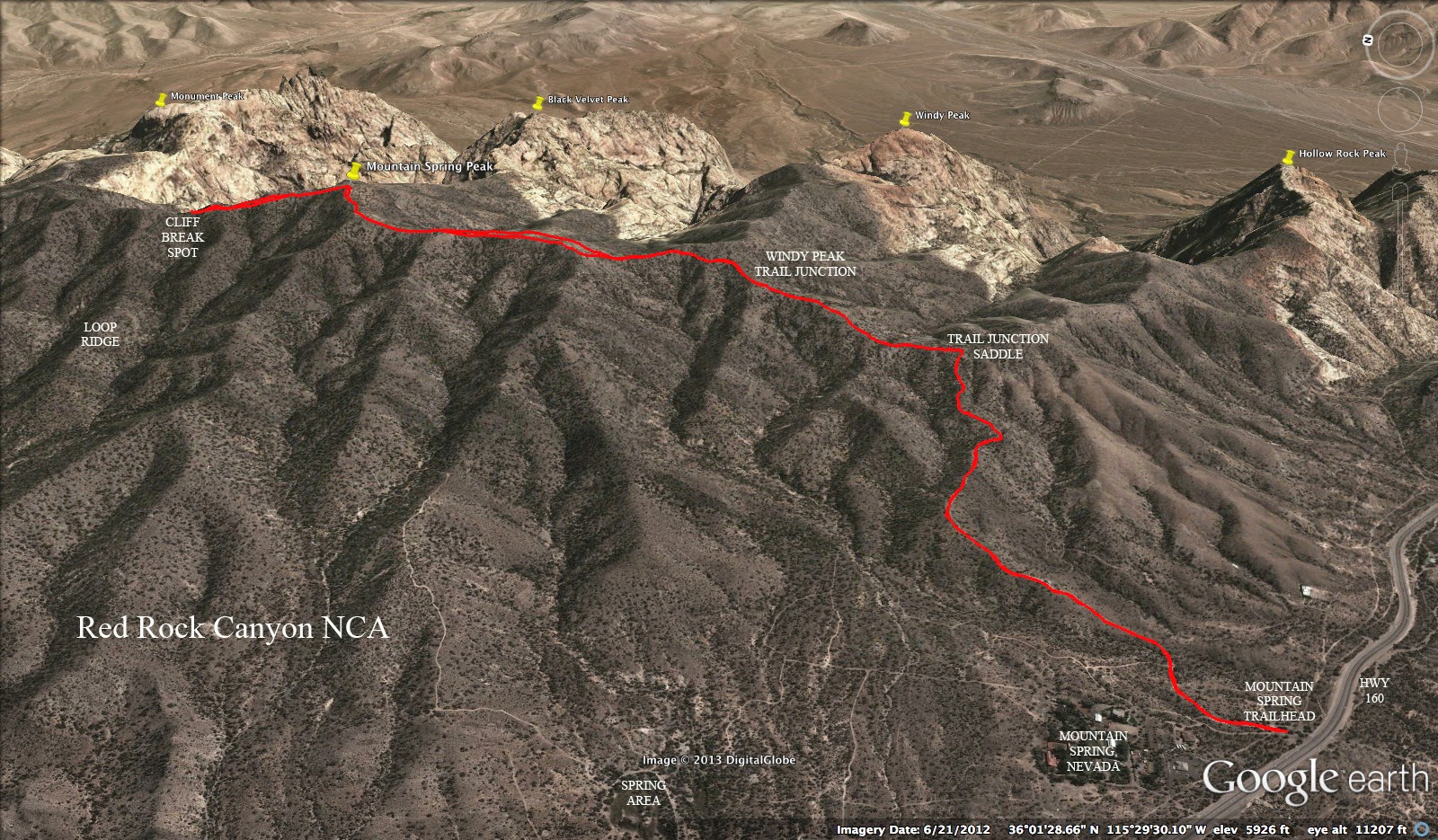