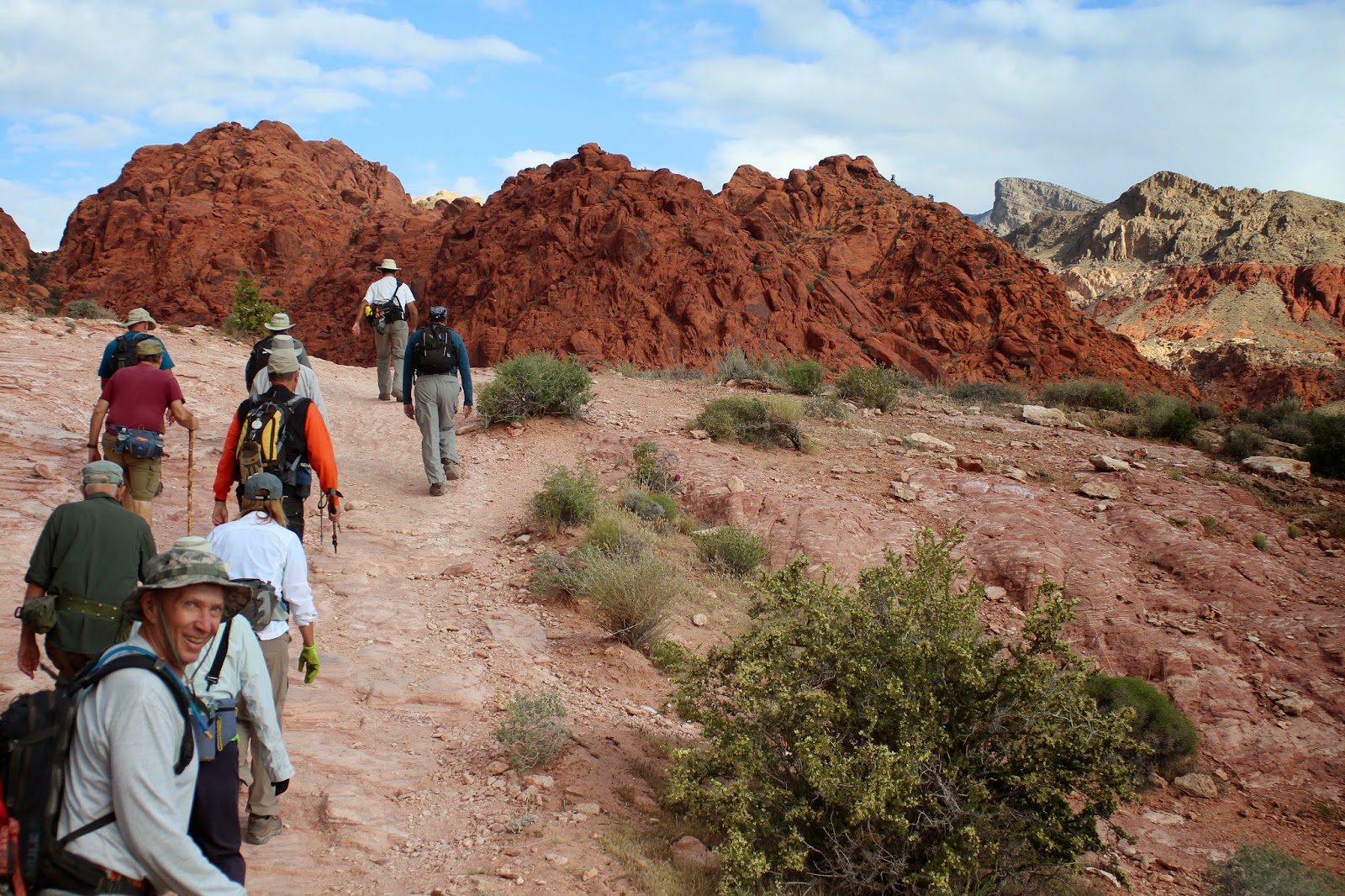 "Into each life some rain must fall…"

~ Henry Wadsworth Longfellow
This is the quote emailed to the club membership last night! We were encouraged to come with rain gear and a sense of adventure! ... And, came, we did. We had our sense of adventure but the rain gear was unnecessary as seventeen hikers scrambled over the sandstone of Red Rock Canyon NCA with not a drop of rain. Our fun started from the Red Springs Park in Calico Basin where a large group of Search and Rescue trainees were gathering their gear for a day of learning.

We hiked up toward the northwest and circled around the base of the Calico Hills. The trail took us up through the old picnic area and on through Ash Meadows.

After the meadows, we chose the trail that climbed up on the sandstone to the right of Ash Canyon. The indigo bushes were blooming, adding to the already full color palette. 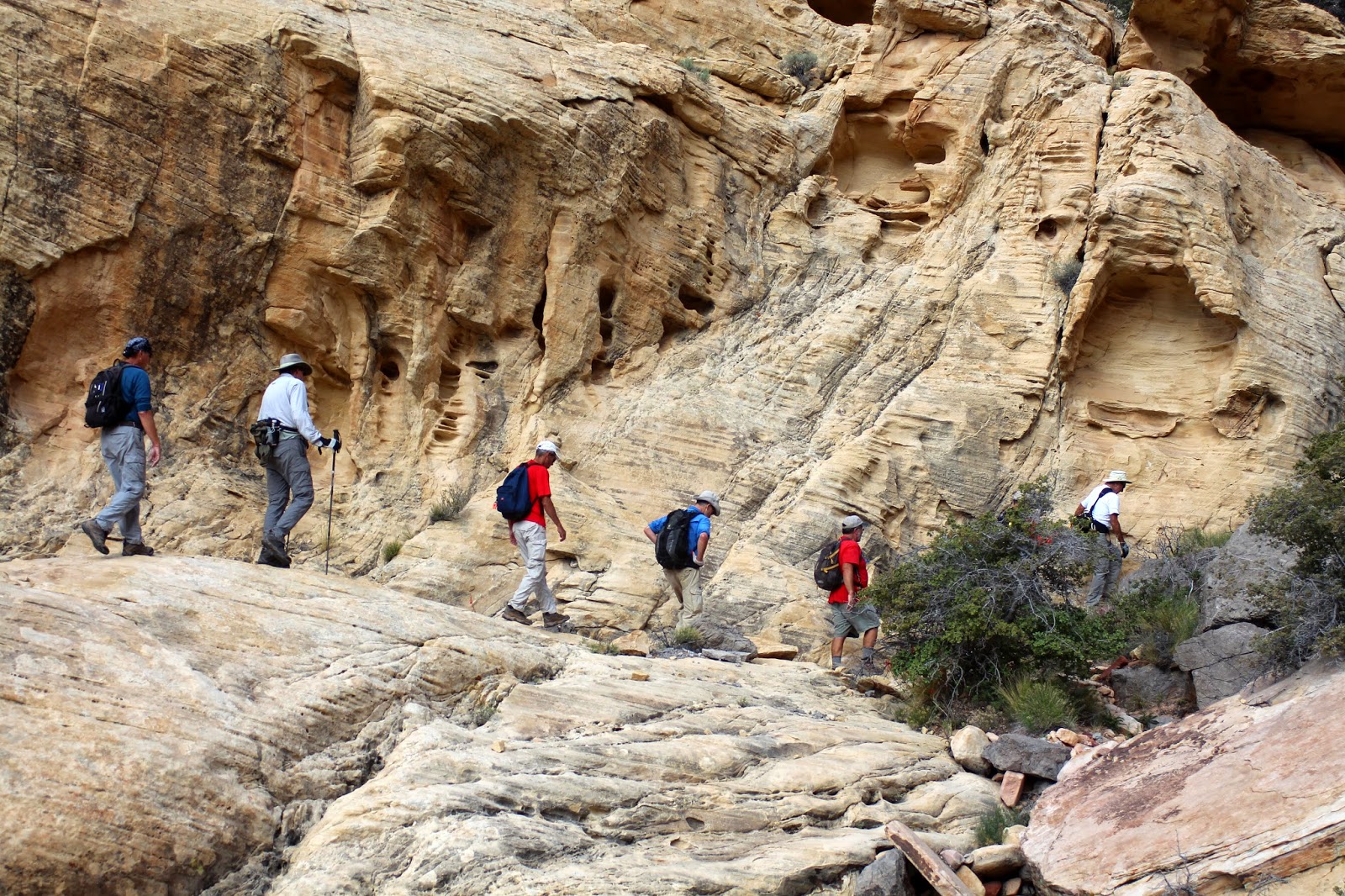 Soon, we dropped into the Ash Canyon wash and crossed over to the south embankment. Staying as high as we could, we climbed the canyon. Passing a few places where the exposure was a bit challenging, we eventually reached the intermediary saddle area. The photo above is from this point. Next, with the exception of one hiker who stayed in the wash, the group continued their exploration high up on the south side. When everyone reached the top of the canyon, we took a short break.

Turtlehead Peak rose up in front of us and the twin peaks of Red Cap could barely be seen to the south.

The second peak that we could see (to the right in the photo above) is the peak we would be climbing in a while. First, we had to deal with a very in-your-face crack climb. 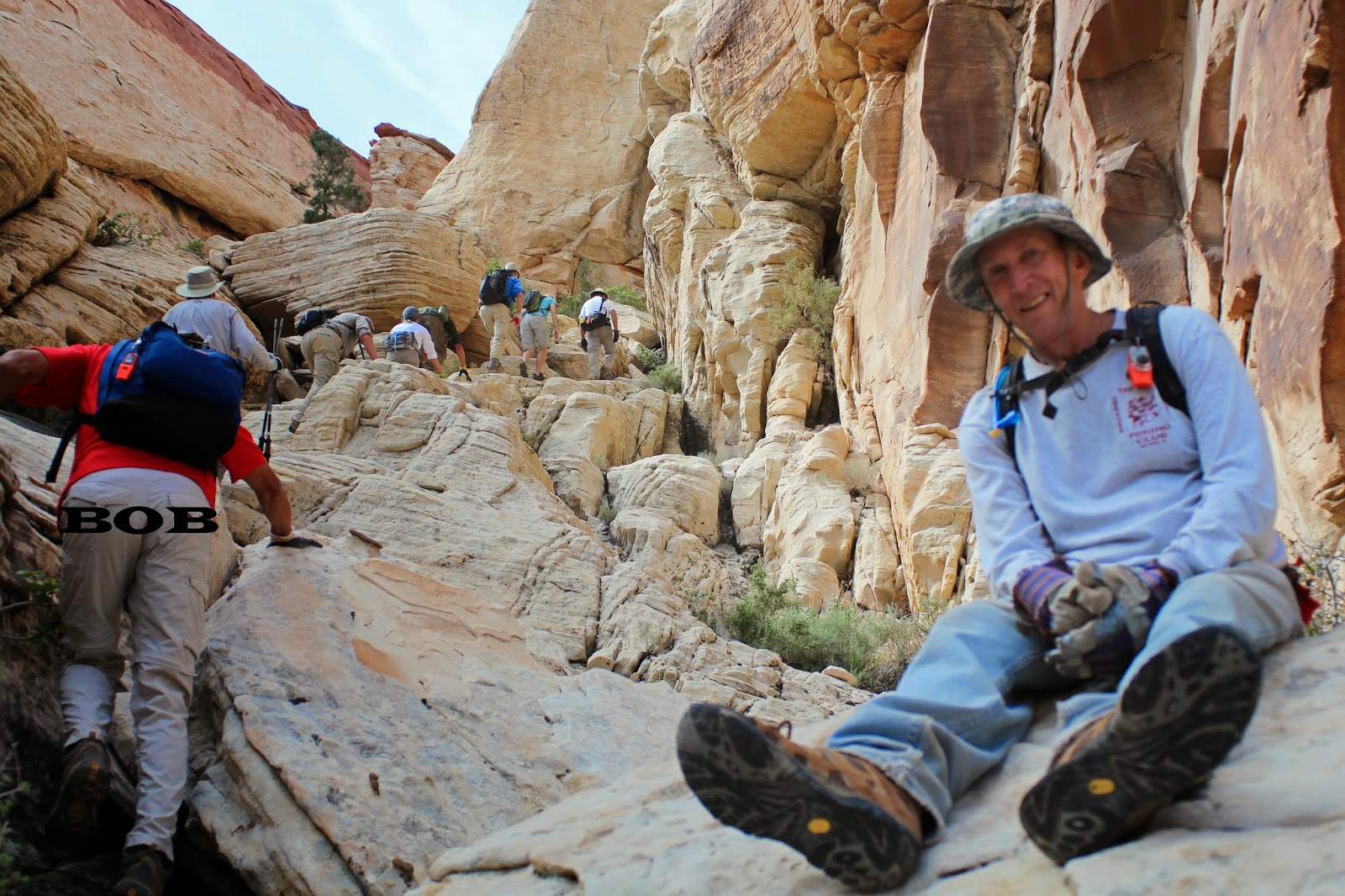 We circled the north side of the Calico Hills and found a daunting crevice leading up to the peak we could not see from below. The crack is famous as a difficult climb with difficult scrambling. Yep, probably should be described as Class 3. Challenge after challenge was thrown at us. Still, we persevered! Nevertheless, the worst obstacle was yet to come. No problem. A strong strap and a strong strapping man was the cure for this!

Tim anchored the strap and Mike supervised as hiker after hiker surmounted the climb up through the bush, up the log that is starting to smooth out, up the stacked up rocks and, finally, mantling up the last bit of sandstone. ... Thanks, Tim.

We were now on the red sandstone of Red Cap. A little more climbing in the open air, a circle around the tank that is still filled with water, a short but challenging scramble up to the peak and we were there. 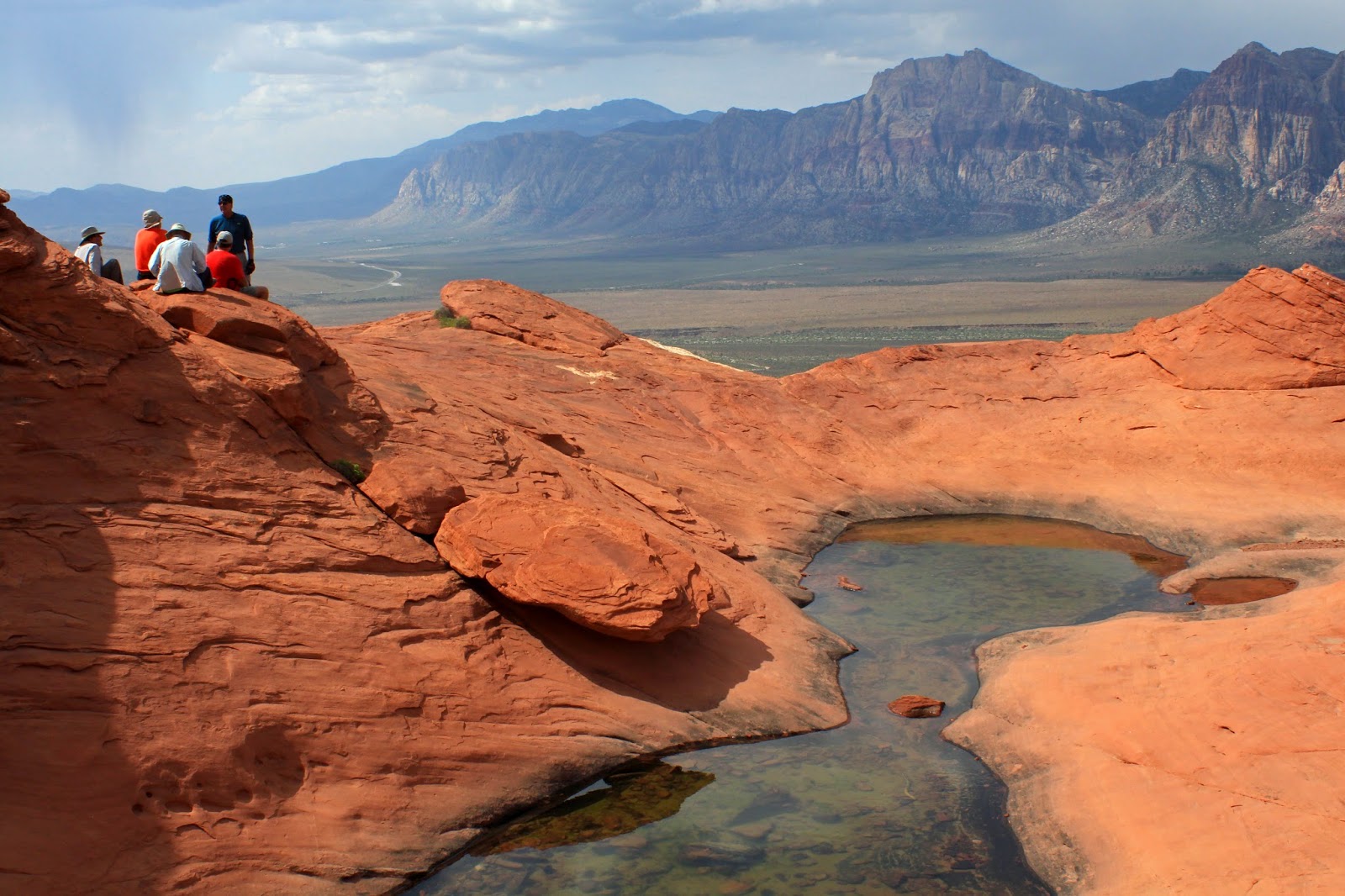 The wind was chilly up there and everyone decided to come down off of that last scramble to enjoy a break ... especially since almost everyone left their pack down at the tank! The view from this vantage point was huge and improved by an interesting heavy sky coming from the south. Our break lasted just long enough to allow the wind to bring some of those heavy clouds our way. It was decided that we should keep moving. So, onward!

We gathered our packs and started dropping off of the red sandstone in a southerly direction. This led us to a very steep white sandstone scramble down.

We had three choices of routes. The third choice was probably the "easiest" and that's where most of us came down. See above.

From the bottom of the descent, we circled around the wall to our left and ended up at the bottom of the final approach to the other peak of Red Cap. We continued down to the tank level on familiar rock while passing by Neil who leads hikes for out-of-towners for a price. See www.hikethislasvegas.com for a good time!

We dropped down to the Wall Tank that also had water in it. Here, the route down the east side begins as seen below.

After zigzagging down a little, we gathered again and took a short break. The view of Gray Cap from here is seen in the second photo. 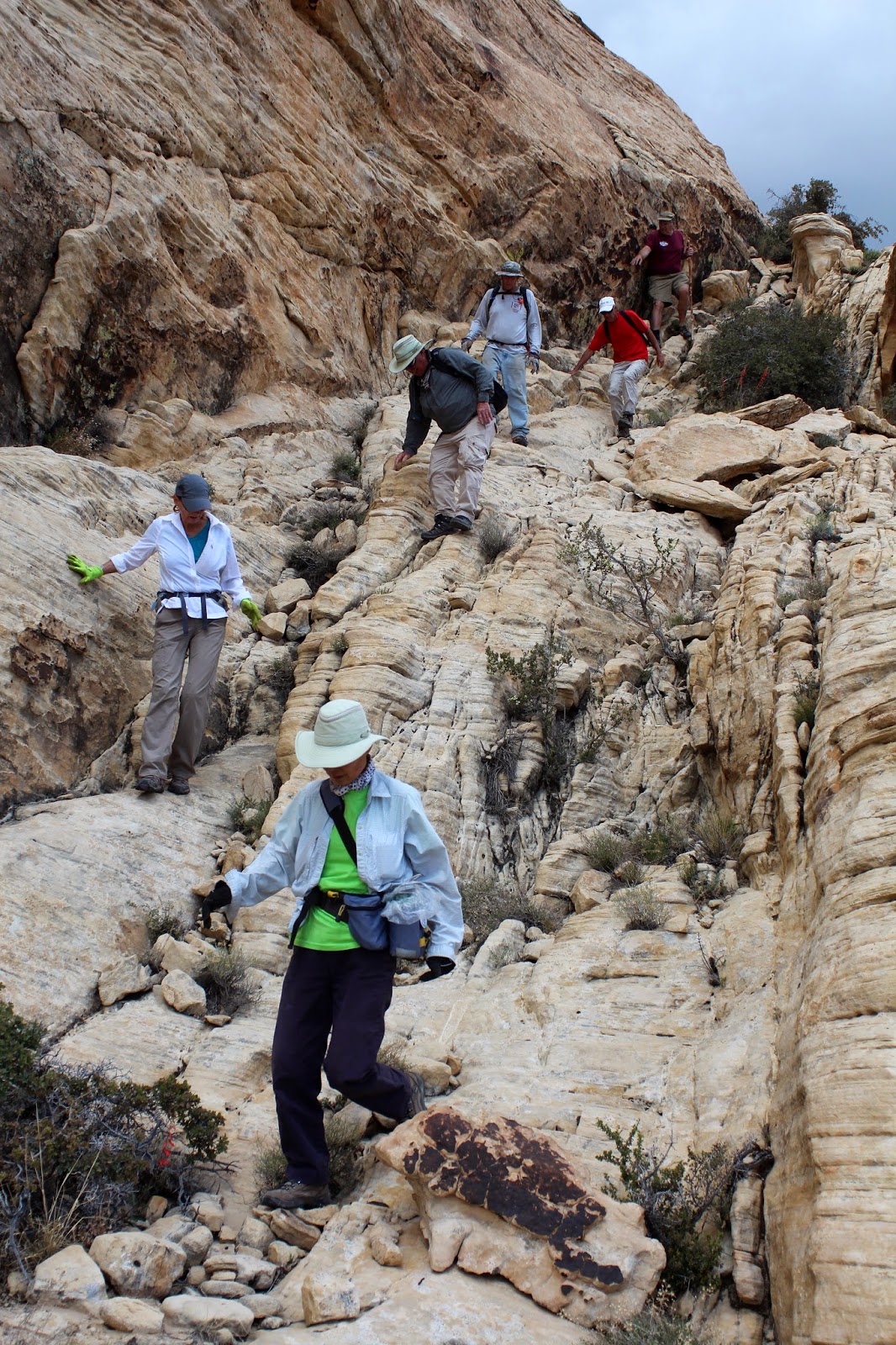 We found our way down off of the white sandstone in three different groups. The unchoreographed scramble was a blast! Next, we hiked over to the top of Ash Canyon where we had arrived not long before. It was decided that most of us would take the trail down to the intermediate saddle then scramble down the Ash Canyon wash. A few hikers decided to descend through Dragon Canyon. The bouldering / scrambling down through the wash was invigorating. Challenge after challenge required our arm and core muscles. The leaders were at least 200 yards in front of the sweepers but we all gathered again at the bottom. From there, we returned to the cars on the trails around the base of the Calico Hills. Really fun day! 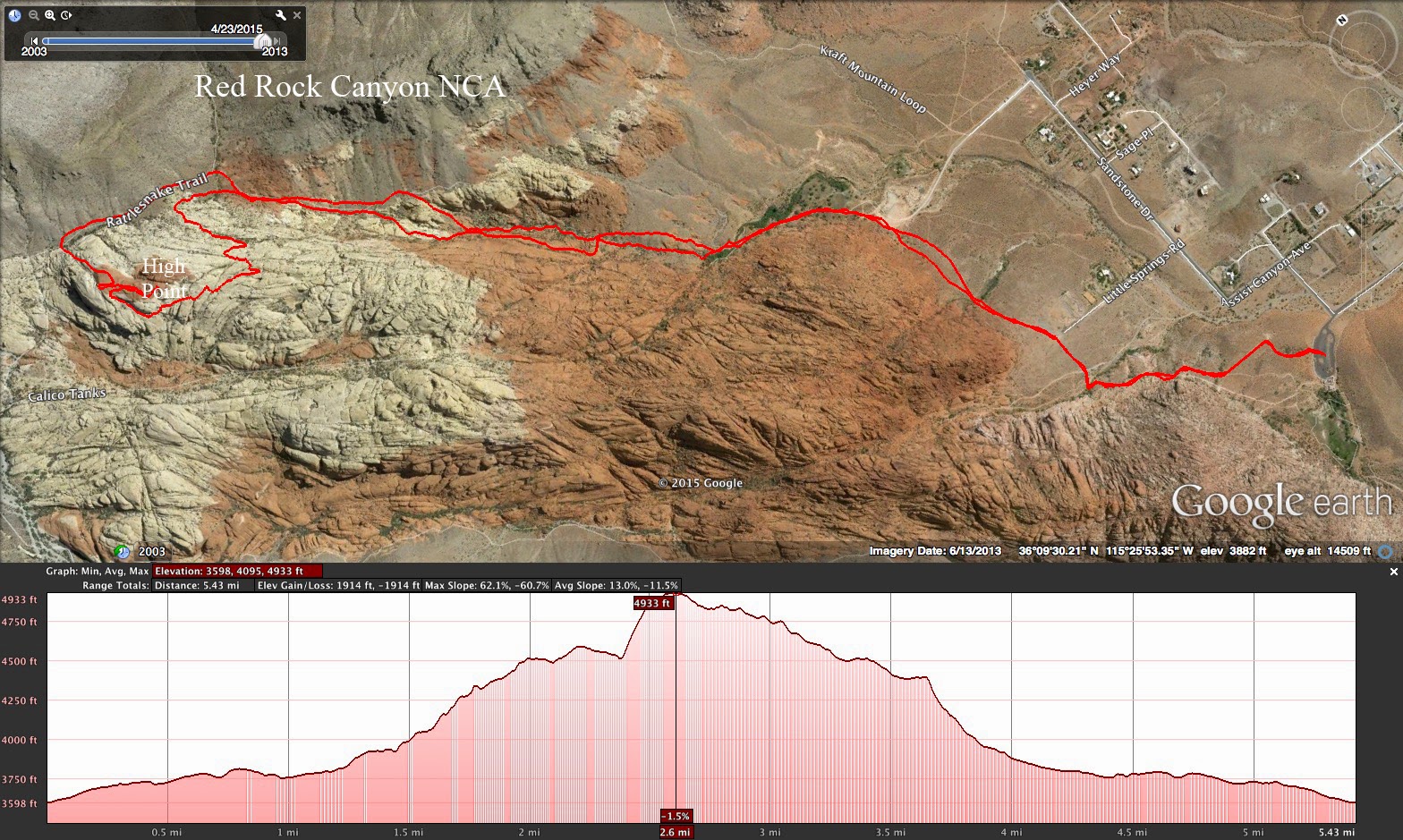 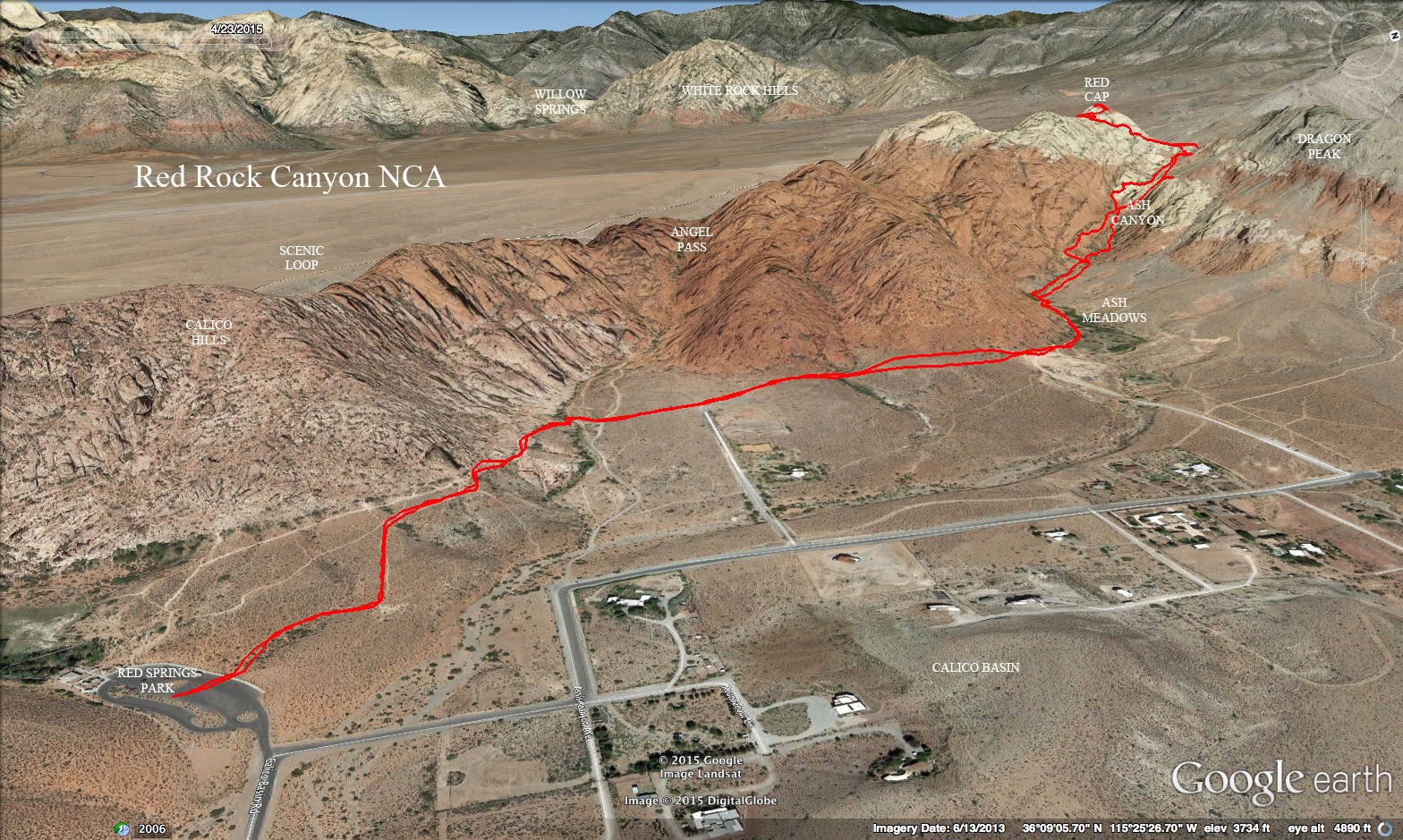 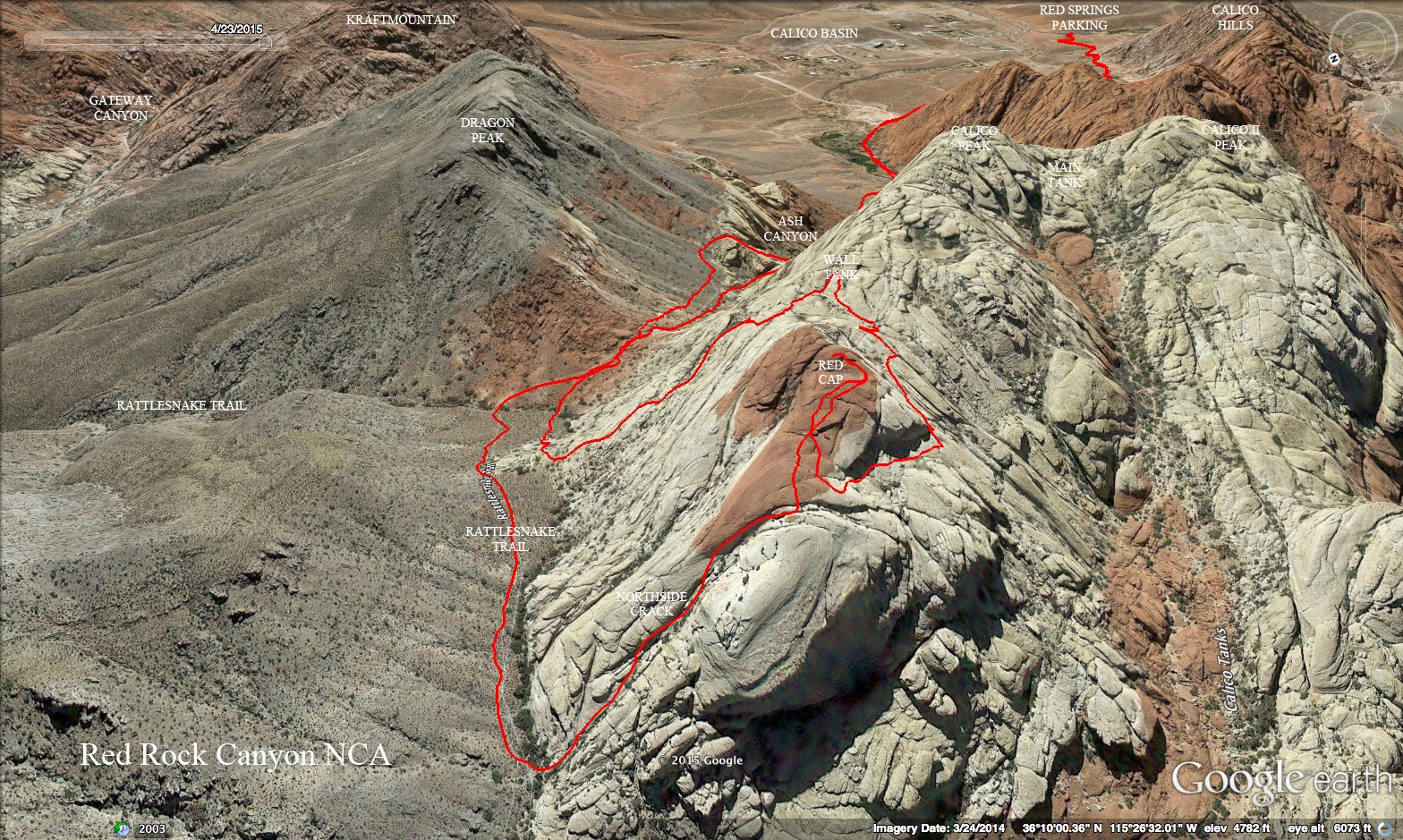