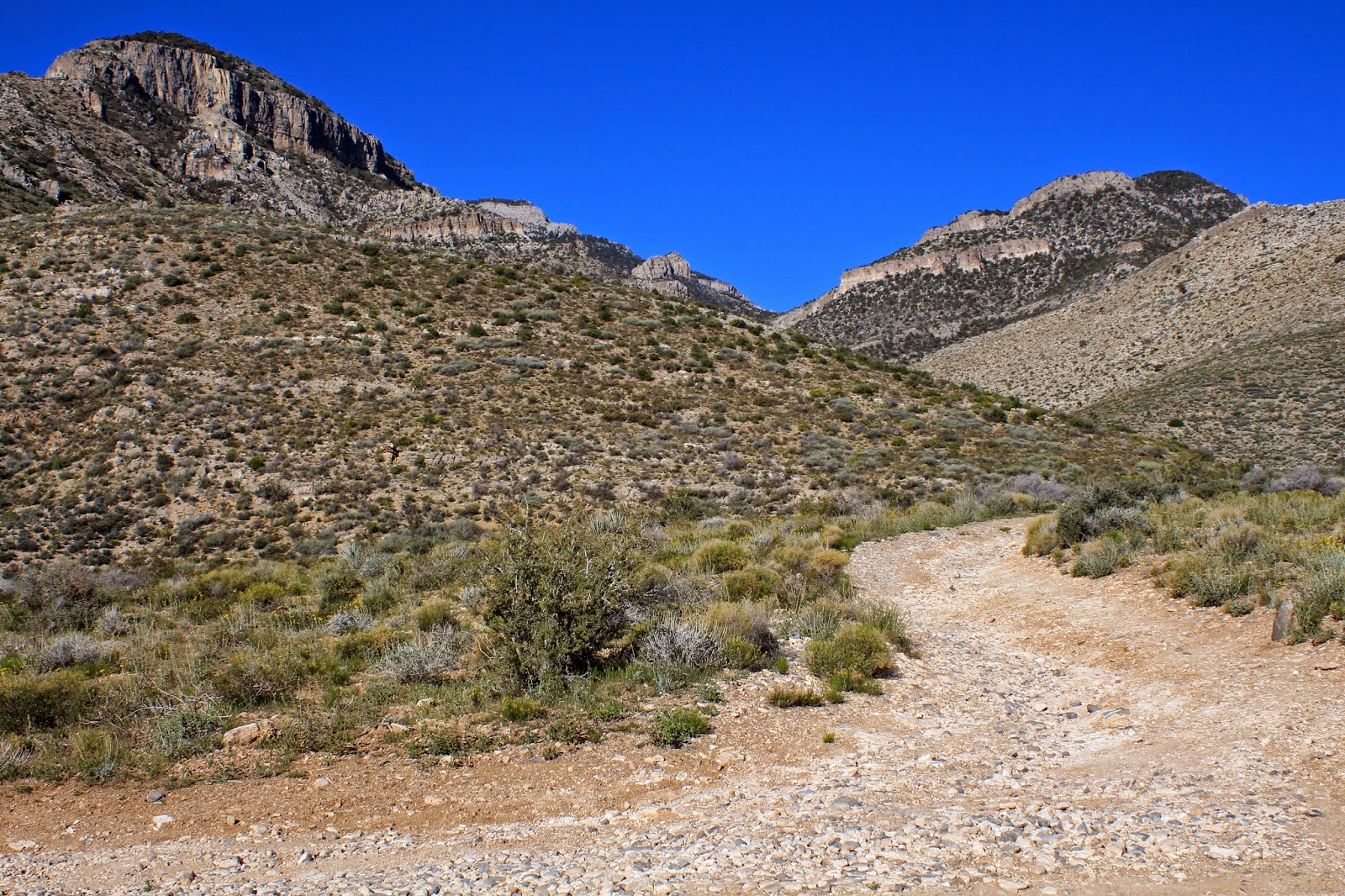 Sometimes the better hikes happen when you get a little off track! Today, six hikers set out in the Cottonwood Valley south of Highway 160 to hike into one of the canyons at the base of Mt. Potosi. It was the third large canyon from the highway so we'll call it Canyon 3 for now. We drove out Cottonwood Valley Road, a dirt road that is in fairly good shape for almost a mile. We turned right onto another dirt road after the Badger Pass / Deadhorse Trail trailhead parking found on the left. This road was in a lot worse condition. Slowly we drove one mile up toward Mt. Potosi, finally stopping to park where the road forked (as seen in the photo to the left above).

Our hike began on the road fork to the left. Here is a very bad potholed and steep hill that can only be negotiated with the toughest of vehicles.

We hiked out the dirt road rounding the ridge to our right. The uphill climb brought us to the mouth of Canyon 3 where a wildlife guzzler has been constructed for smaller animals. There was also a truck parked here but we never saw the truck's owner. 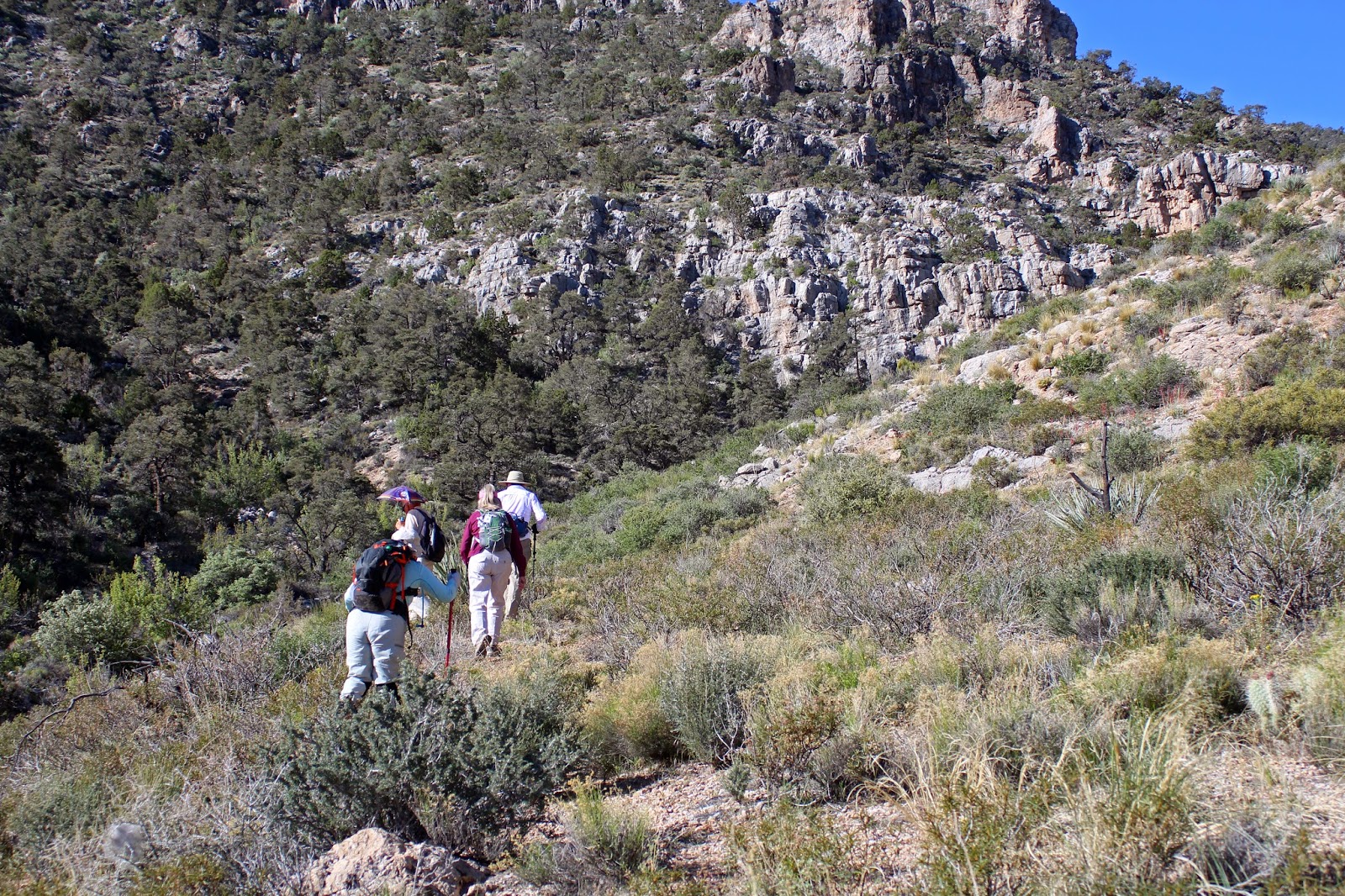 We passed the guzzler and started hiking up on a bench to the right of the canyon wash. There isn't much of a trail here but the open terrain makes the route easy to navigate over to the canyon further up. Eventually, we dropped into the canyon wash and began an easy scramble up the limestone rock. The canyon is narrow and, apparently, it becomes more narrow as you ascend. The weather was quite cool and we also had a cool breeze to go with it.

We happily climbed the wash and came upon an area where someone had built several cairns ... or, ducks, as our coordinator Dave calls them.

The wash became very brushy here and we wondered if there was an up and around that we could use. So, we followed a cairned trail that turned to the right. Soon, we found ourselves going definitely "up" instead of just "around." In fact, we were headed up the side of the canyon to the ridges above. 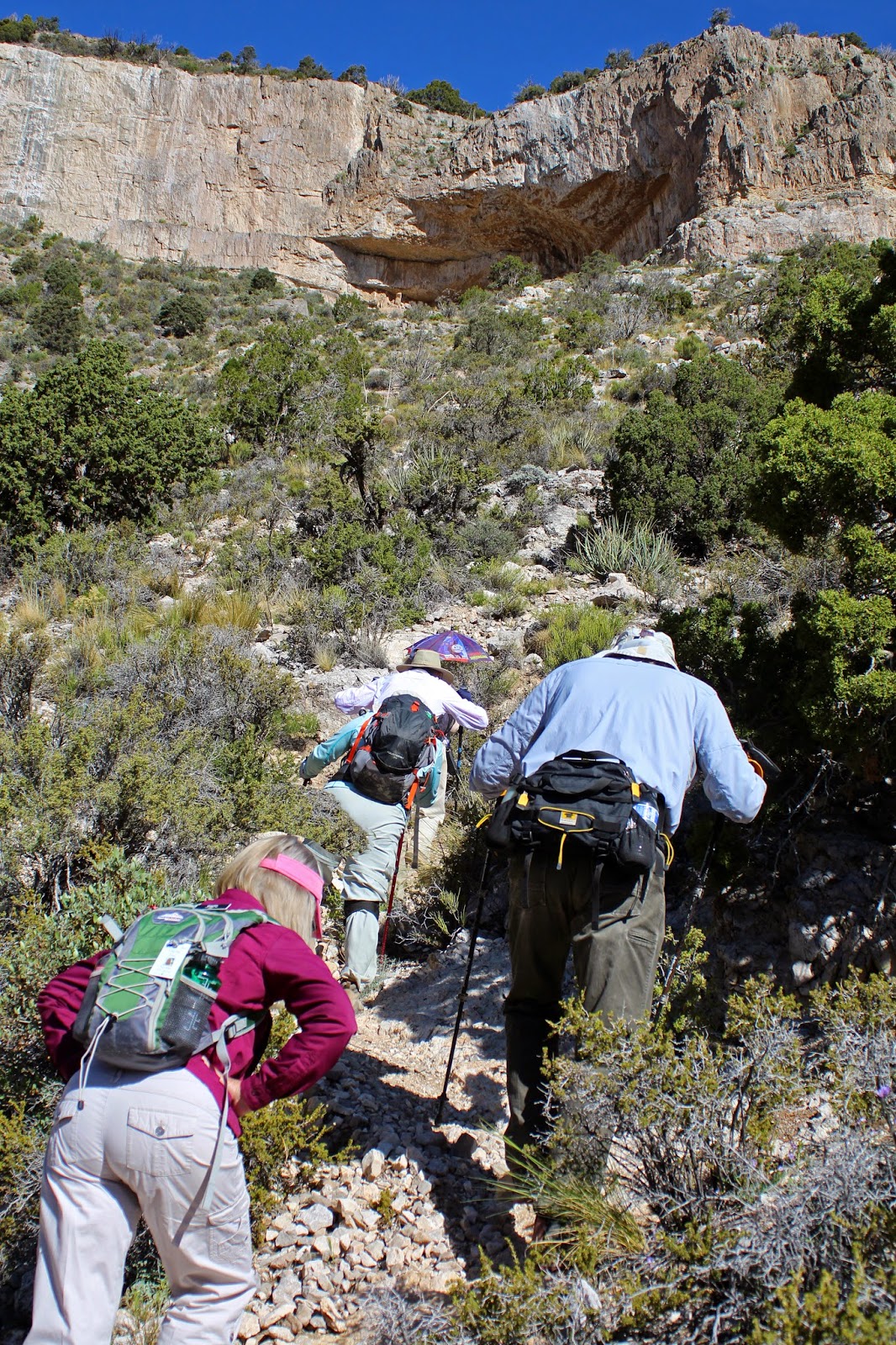 This was away from our intended direction and we were leaving Canyon 3 behind. Our curiousity got the better of us and we just kept going. Up and up and up. Where the heck does this clear and obvious trail take you? Maybe it was the overlook ridge up on the right. Although ... there was an interesting cave alcove up there, too. Maybe we can take a peek into the alcove as we pass by it ... if we get that far! Hmmm. The scrambling up the steep slope could be considered strenuous and two of our hikers begged out of the climb. Thoughts about the future descent were weighing heavy on everyone. Yet ... up and up the remaining four went. As we got closer to the top, it started to become clear that we were headed for the alcove. From our lower perspective, the cave alcove did not look as impressive as it actually was. But, what the heck. We came this far. Let's see what we found!

What a surprise! The alcove is HUGE! Inside, we found evidence of regular human visitors. Yep! A rock shelter. Climbing equipment hanging from the wall and ceiling. Etc.

We surmised that rock climbers come here to practice their upside down moves. ... And, party. 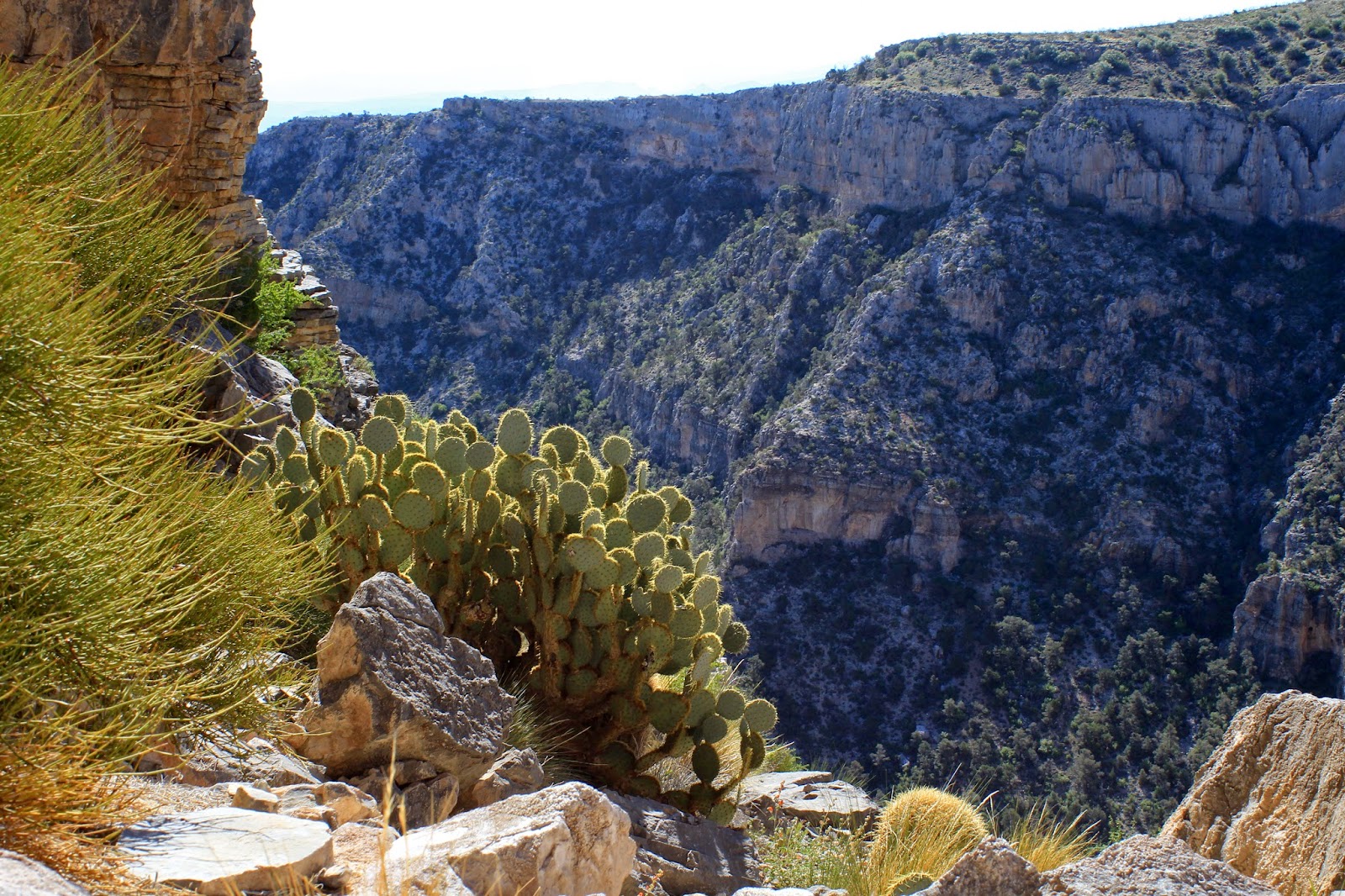 We explored the whole alcove that had an upper level and a lower level. The entire alcove was perhaps 200 feet long and 40 feet at its deepest. It was set into a wall of rock that encircled the small canyon approach. At the lower end, there were three very large prickly pear cacti guarding the castle. On the top of the wall on this end, there was a prickly pear sentry. (See the photo above.) We took our break then faced the music. The time to descend the steep trail had come.

Dave was very conscious of the three ladies behind him. Our "lady moves" slowed us down quite a bit.

Nevertheless, we slowly but surely got down the hill safely and found the other two hikers resting at the bottom as well. 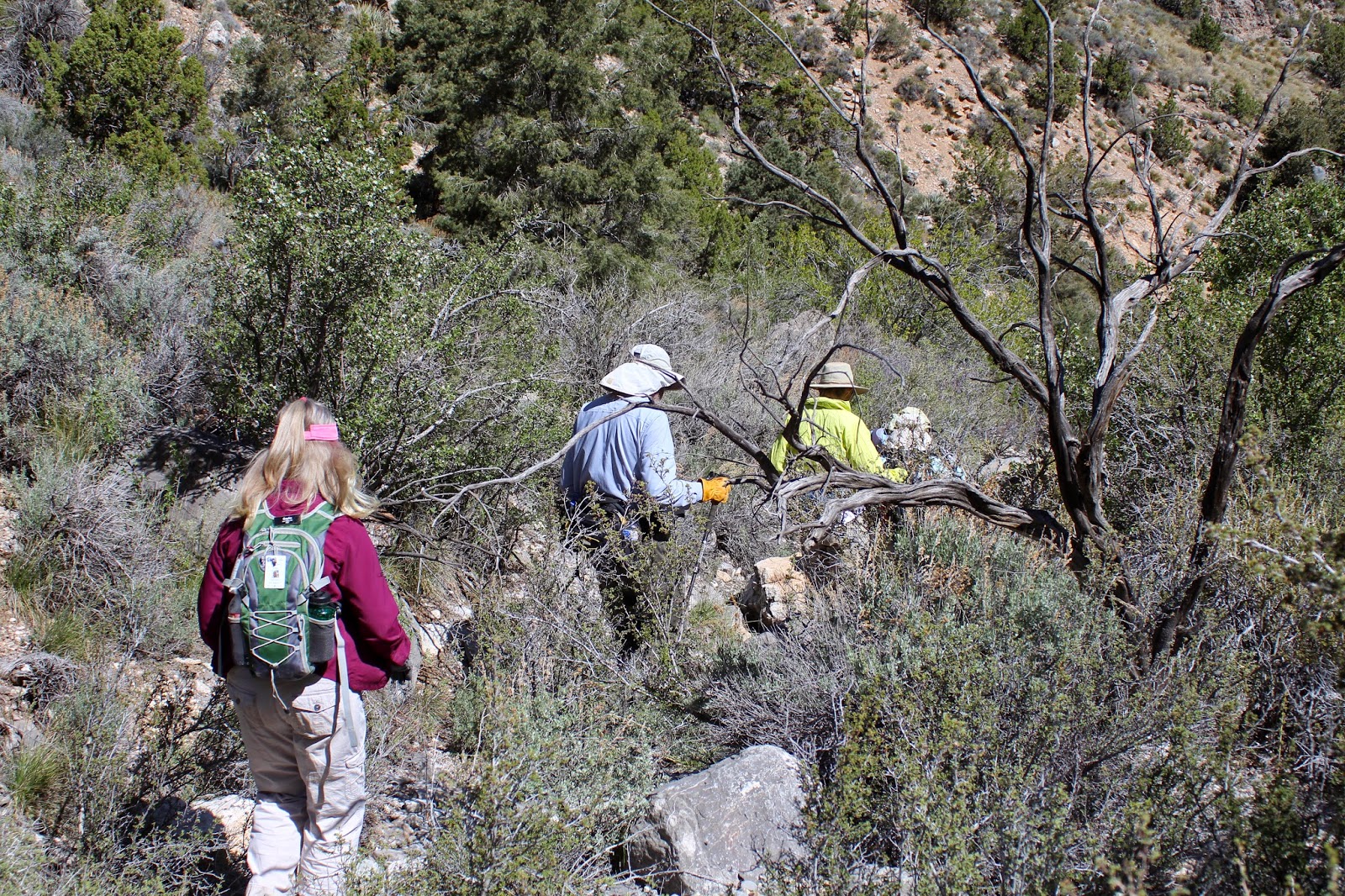 We decided to leave Canyon 3 for another day. Our side track trail was a lot to digest. We were pleased with our discovery and had a lot of fun. We turned left into the canyon wash and followed it all the way down to the guzzler where the truck was still parked. Next, we followed the dirt road back to our cars. To make this hike longer, we could have gone on up the canyon and back. Or, we could have begun the hike at the Badger Pass trailhead for a 6.5 mile trek. The morning was very exciting! This hike will be added to the list. 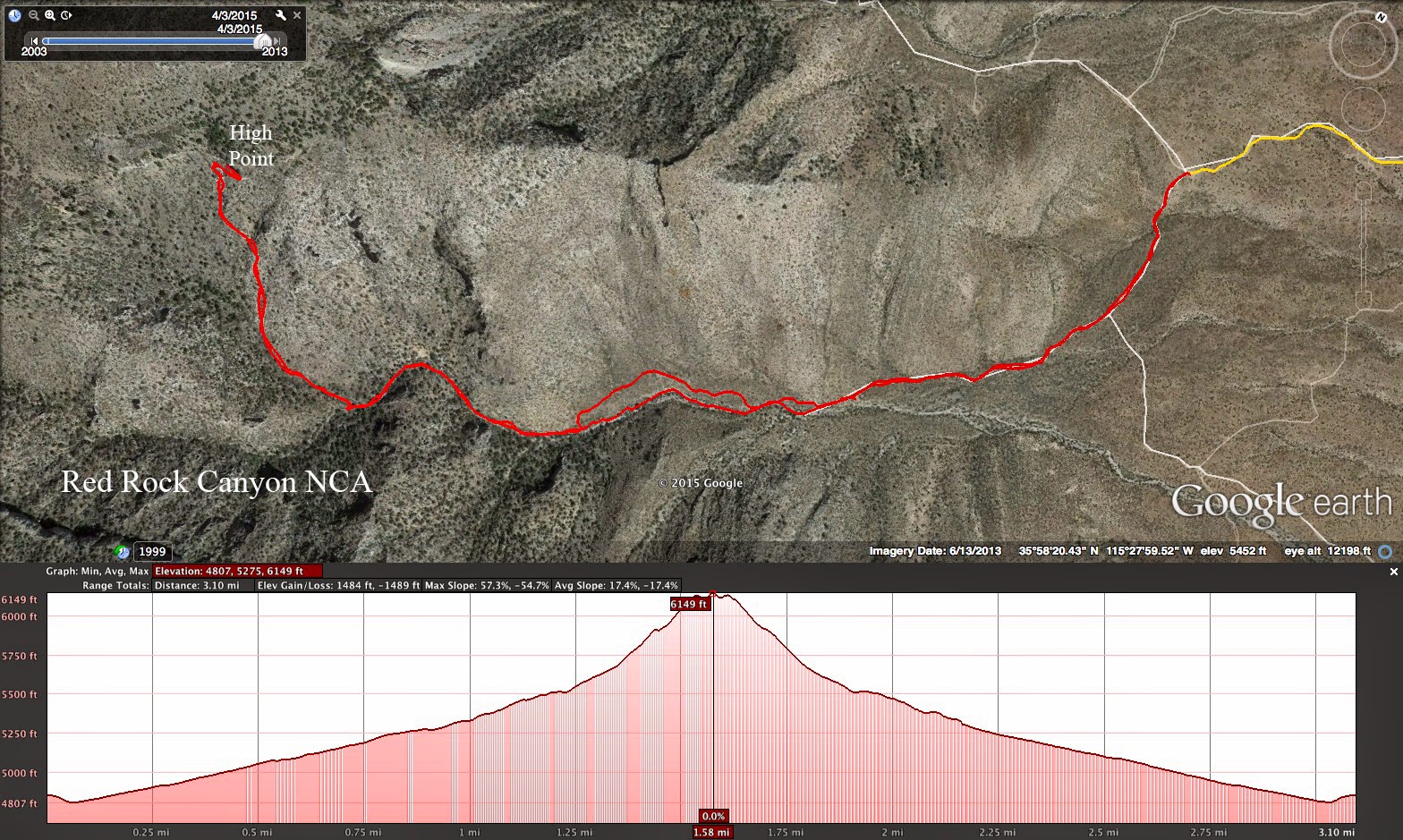 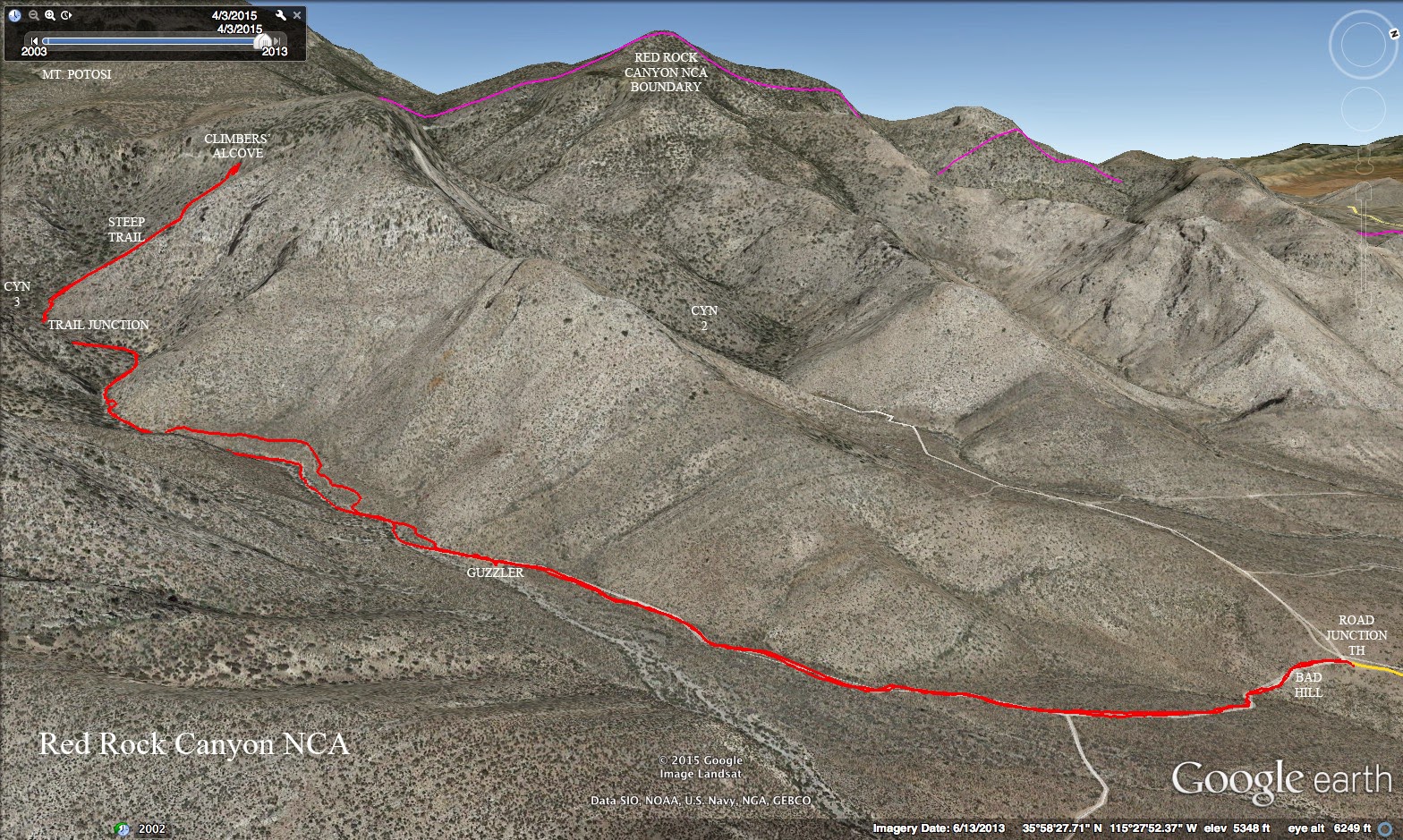 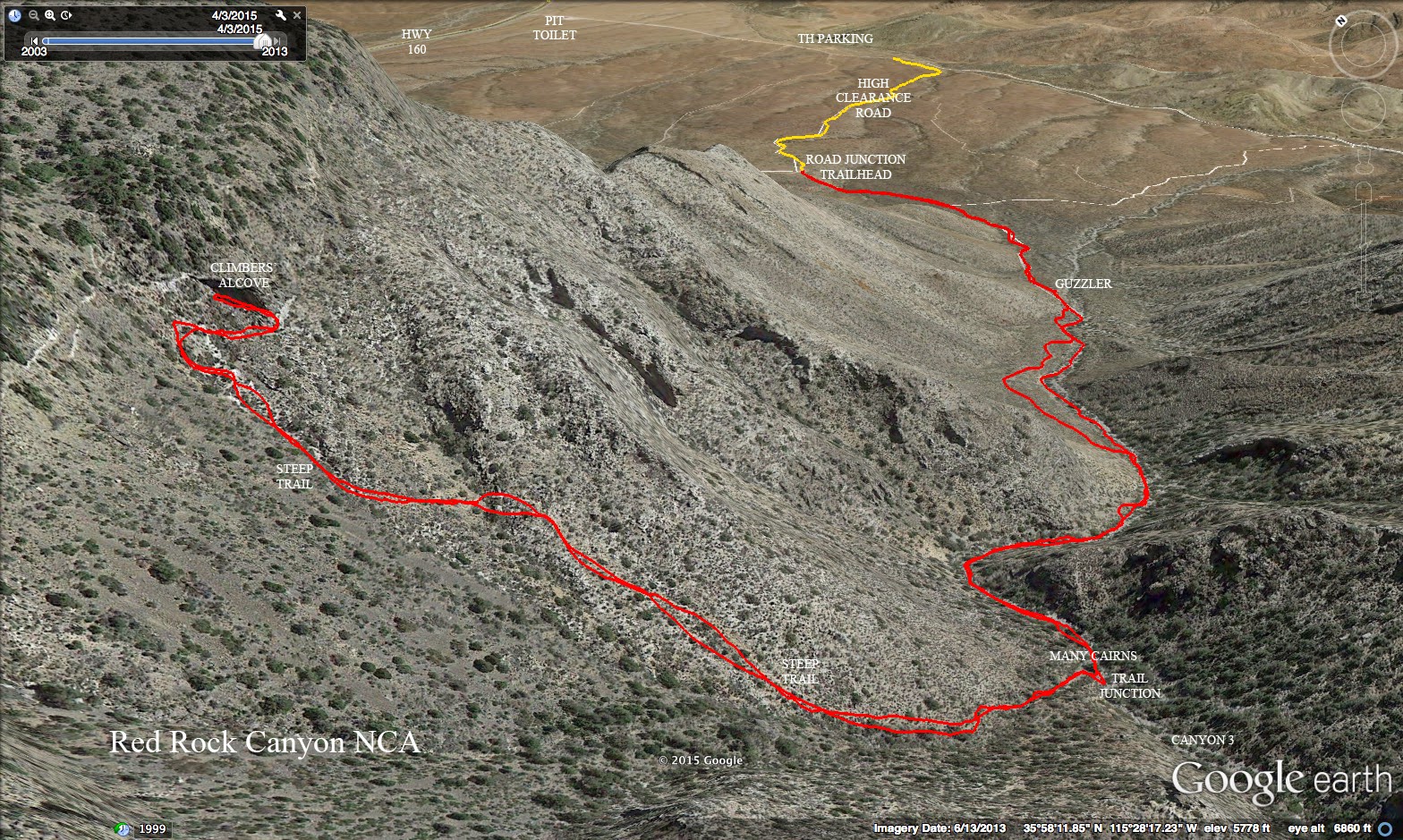 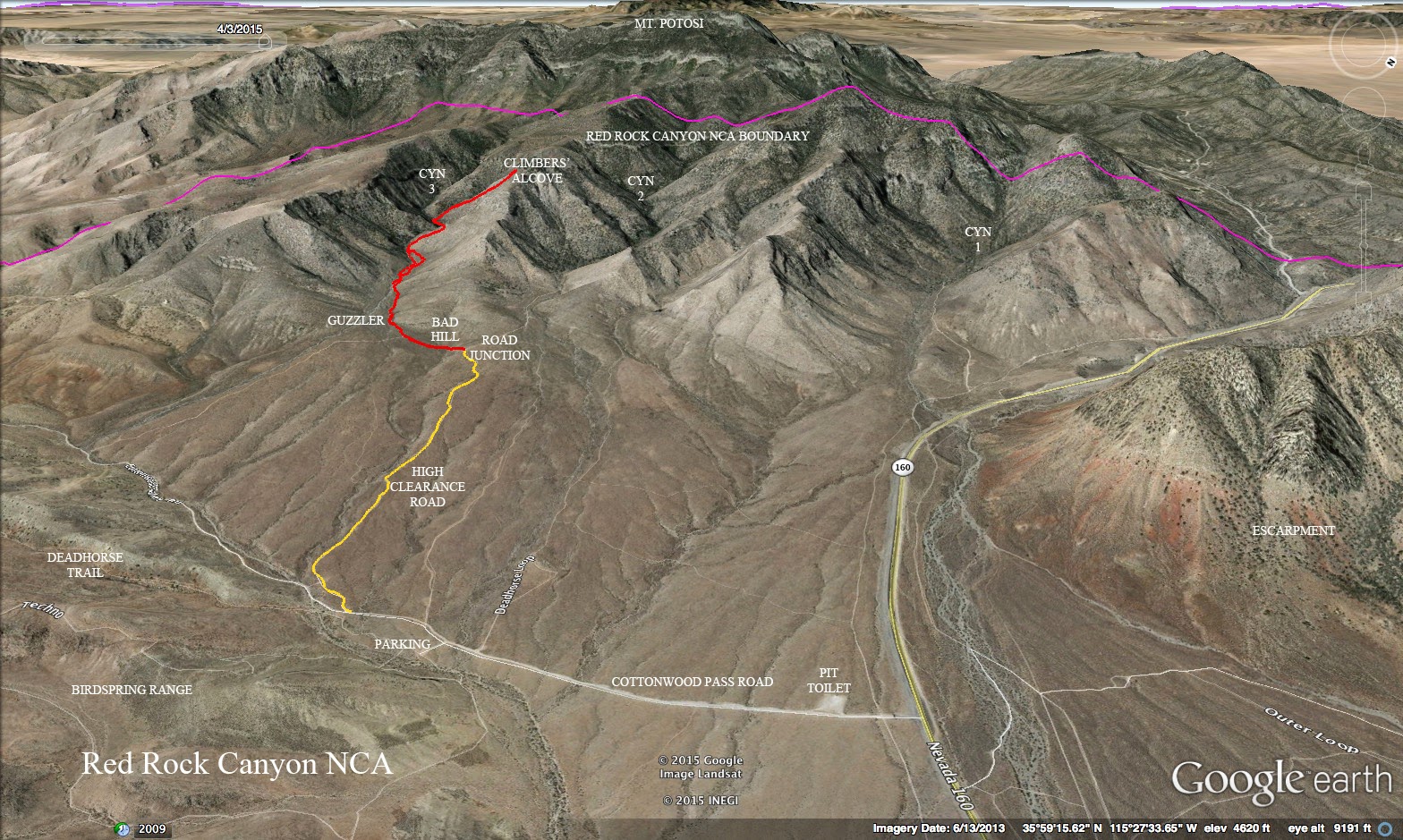