There is an area of the Spring Mountains,  reached out of the Upper Bristlecone Trailhead, that is seldom entered and explored. For many years, a small airplane rested on the side of Wallace Canyon. One man died in this crash and the other, his father, wandered in the deep snow looking for help. Help didn't reach the crash site in time. We used to hike to the crash site where the airplane was still in almost one piece to pay our respects and marvel at the well-preserved plane until someone decided that it needed to be removed from the wilderness before it became too old to do so. We still hike out there to build on the small memorial pile of pieces that the removal did not clean up. But, fewer and fewer hikers are tramping the trail. Perhaps today's hike will give us and others a reason to go out that way and improve the game trail that lies along the canyon.

Twelve hikers gathered at the Upper Bristlecone Trailhead in the very cool morning air. We hiked the familiar trail up for one mile and turned left onto the No Name Trail.

From there, we hiked up the No Name for around a quarter of a mile and took another left turn. This is the Wallace Trail.


The Wallace Trail climbs up to a trailing ridge then proceeds to climb steeply up the ridge to a curve to the right. The curve leads to a traverse over to the Wallace Saddle. Wallace Canyon flows out from the saddle on the other side. There are very nice views here and, if you are looking for a short hike of 3 miles that will give you a good workout, this is a good destination. However, a longer hike was in store for us today so our water pause on the saddle was not long while we waited for the last two hikers to come around the bend. (...)
There are several directions you can continue from here. Not least of which is to the left where the Tuesday hikers began their ridge climb up to Lee Peak.

Today, we dropped down the other side of the saddle to catch the old plane crash trail. It is very vague at this time but we floundered our way over to the site about a third of a mile away.


As I swept the line, I noticed a "large" piece of the airplane sticking vertically up 1 inch from the ground where it had been washed next to a log. Knowing what it was, I pulled the 4"x6" red and white piece out of the dirt and added it to the small memorial of tiny pieces left from the crash. This memorial rests on the spot where the plane came to a stop on 15 feet of snow. To read the whole short story of that fateful order of events that included three plane crashes (and a helicopter crash), go to http://dreuxalumni.org/anthony_john_rosa_obit.htm

After spending a moment at the crash site, we continued up the game trail that brought us there. This trail is very difficult to follow. We ended up winding our way up and down the mountainside on a traverse trying to follow it.

For the hike going out, we were bushwhacking more than following the very vague game trail. The hike back was very different ... but I get ahead of myself. When I was able to download the track, I saw that we had hiked a couple of extraneous hills and dips so I drew the map to appear that we had found the game trail that we returned on. In actuality, we hiked out passing the game trail way up and down two times. We will have a better track to follow in the future.


Finally, at the end of this particular ridge where Wallace Canyon continues by curving around to the southwest, our traverse came up to meet a large limestone outcropping as seen in the photo above and below. We saw Pahrump in the far distance at the mouth of Wallace Canyon. We sat here for our break and enjoyed the great views all around; including a clear view of the Wallace Saddle behind us. This is a very nice destination to add onto the plane crash site. No worries. The trail just needs improvement.

While we took our break, a few hikers climbed up on the big outcropping and agreed that the views were even better up there! To our left, the rock outcrop continued solidly up the trailing ridge as seen in the photo below.

When we started our return, we wondered how the coordinator was going to find her way back! Expertly, she found a better game trail and followed it all the way back which put us going much higher than the crash site when we passed through that area.


The best place for the "going" and "coming" trails to meet is in the wide ravine that flows down from Lee Peak. This is probably an area that is prone to avalanches in the winter. Our higher trail on the way back brought us around to the slightly higher second saddle next to Wallace Saddle. We made our way over to the first saddle then proceeded down to the cars the way we had come up. This is a very nice "new" destination off the beaten track. Kind of a reenactment of the father's wander to find help for his son but without snow. Just a cool windy day. 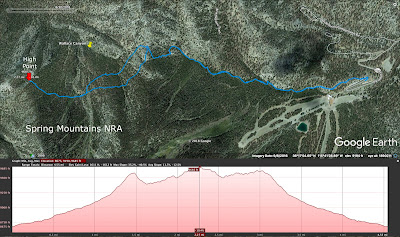 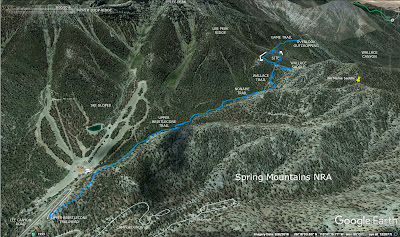 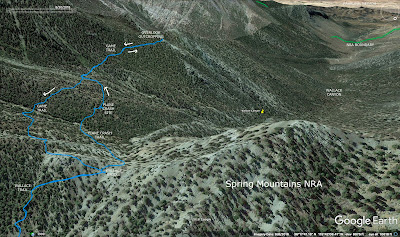 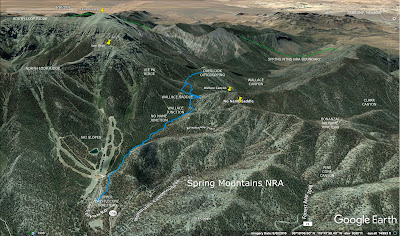 Posted by Las Vegas Cockapoo at 9:55 AM