The smoke from the California fires have been invading the Las Vegas /Spring Mountains area for almost a week now. In the valley, the smoke obscures the surrounding mountains almost to invisibility. However, when we get into the upper elevations (around 7000-11,000 feet), the air is hazy but clear enough to reveal blue sky and mountaintops. I didn't even smell burning wood. ... Let's keep it that way! So, today, nine hikers set out to beat the forecasted thunderstorms on a 7.5 mile hike starting at the Lower Bristlecone Trailhead.

We set a good pace going up the 3 miles of Lower Bristlecone Trail to the Bonanza Trail junction. The gradual slope allowed for a lot of conversation.

By the time we reached the junction, a breather was in order. We stopped for some water then continued up the Bonanza switchbacks.


After being spoiled with the easy gradual slope of Lower Bristlecone, the harsher slant of the switchbacks was a wake-up call! At the Bonanza / No Name Trails junction, we sat for our "official" break. (They laughed at me calling it "official!" I love these guys!) Anyway, after the break, I slowly led them up the steps of the Bonanza Trail. At the crest of the hill, we were able to pick up the pace again as we descended down to the Pine Cone Canyon junction. Our contingency plan (for the appearance of possible thunderstorms) was to return to the trailhead via Pine Cone Canyon. I looked up and saw only a blue sky ... with a smattering of smoke.

Without even stopping, we blew by the junction and continued through the beautiful bristlecone forest. We noted that all the horse equipment and construction materials were gone from the holding area.

Next, we came to the new steps that had recently been constructed by the Back Country Horsemen of Nevada and the Great Basin Institute. This devilish section of trail climbs via short switchbacks up and around a small peak on the ridge. With the new steps, horses will be able to negotiate this hill much easier.


We rounded the peak then climbed up to the high point of today's hike. The high point is simply that. The high point! Then the trail drops down a little to an open area with a beautiful display of old bristlecones and views. McFarland Peak had been visible since the crest of the Bonanza steps but now the peak is framed with the old trees and light gray limestone as seen in the second photo. Not much further, we came to the Sisters Ridge junction. At this time, it is unmarked since the cairn monster seems to go through here regularly. But there is a trail that goes up and over the low ridge to the right.

We followed the steep trail down the initial part of the ridge. The trail then takes you on a descent through a meadow sprinkled with old bristlecones and wildflowers. We took a short rest at the usual break point scattered with trees to sit on.


A right turn put us on a steep descent down Phase I of the South Sister Trail. Whoa! Slippery! Someone has filled in the eroded trail with small rocks and pine cones making the already treacherous trail even worse ... I have a bruise to prove it! Once we got down the steep part, we enjoyed the wooded lower section. From there, we used the Old Mill Trail then crossed through the picnic area to climb the hill back up to the Lower Bristlecone Trail. A left turn directed us back to the cars. By the looks of the sky, the rain was still about an hour away. Success! 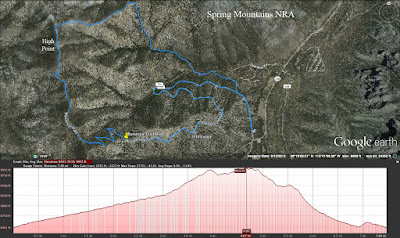 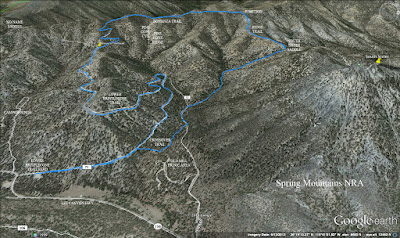 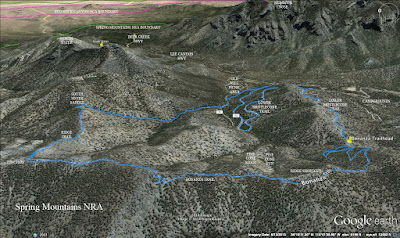 Posted by Las Vegas Cockapoo at 10:13 AM