We had a great opening to our day up at Cold Creek, NV. On the way up the road between the prisons, we searched for wild horses and saw none. That's a good thing. The wild horses in this area were looking very sad before the U.S. Forest Service moved them out. Heading straight out the paved road through the community, the road then changes to a gravel road. At this point, we saw a pair of skinny horses. Not terrible but, skinny. We continued following the road that was graded last year and is still in relatively good shape. The worst sections of the road are near the trailhead.

But, about three quarters of the way out to the trailhead, we came upon a large female elk feeding about 15 feet off the road. She posed for us and we took a lot of photos.

At the Bonanza Trail trailhead, there was one other car. The rabbitbrush is beginning to bloom. You can see the Window in the Cliff from here. After making our preparations, nine club hikers headed up the trail.


Depending on where you start counting, the trail to the saddle on the ridge above has 57 switchbacks. The hike begins on an easy slope. Well, ... easier than either South Loop or Trail Canyon. We settled into a moderate pace up the hill and began a count of the switchbacks at two short quick ones. We gained elevation seemingly fast and were soon looking way down at Cold Creek. It wasn't until around switchback #32 that we hit a long steep hill as we headed over to the other side of our first ascent ridge.

Then, at switchback #35, we stepped out off the trail for an overlook of the window above. See the photo above. (BTW, right around here, we began hearing a large caliber gun begin fired far below. We worried for Mrs. Elk.)

The trail was in excellent shape and has been attended to recently. There was only one tree down over the trail that we had to step across. It was on a long traverse over to the next ascending ridge somewhere after switchback #43.


After traversing over to the next ridge, there were a few more switchbacks then we reached the Bonanza Saddle. It was a beautiful sight with blooming yellow flowers and blue sky. After taking a few photos, we bulled into the half mile scramble over to the window. Hikers who visit the window take a various kaleidoscope of routes. Some go low. Some go high. We tend to go as straight as possible. All routes are difficult and sometimes a remnant of a trail might appear. Regardless, it's the journey! (There were three newbies on the hike today and they must have wondered where in the world I was taking them! But, when I turned around, they were all smiles!)

Our "straight" route started to the right of the saddle and began a sharp limestone climb up and over three fins. Use trails led us to the best places to negotiate these fins.

As we left the last fin, we looked across the terrain seeing long dead burnt trees and a lot of undergrowth on a steep sloped hill. Our object was to traverse this hill without losing too much elevation. Not easy. The best trail remnants were found a little lower down.


We scrambled and hiked and stopped to re-access. Repeat. Repeat. Repeat. In our sights ahead, there was a large limestone wall that cannot easily be climbed. That wall (the gate to Willow Peak) was our basic target. Finally, we came to its vicinity and rounded a protrusion of limestone that came down from the ridge. We looked up to our right and there's the Window in the Cliff. There is still a steep messy climb up to the window but it's short. When we reached the window, whether or not we had been there before, it was definitely a "WOW" moment. The views on both sides of the window are very impressive.

The view from beyond the window drops steeply down a slope all the way to Cold Creek then on down to the Nevada Test Site and Creech AFB in Three Lakes Valley. We also saw the cars at the trailhead!

On the side of the window from where we came, the view reaches all the way down to Pahrump and on to Death Valley. We saw the road leading into Clark Canyon and also the Wheeler Pass Road.


We took photos, wrote in the log book, got cold in the wind through the window then sat in the sun on the Pahrump side of the ridge to eat a snack. We lingered. After all, it's not an easy place to get to. Before leaving, we noted that there were a very large amount of Precambrian fossils in the scree beneath our feet. The photo collage below shows a small example. It is always mind blowing, for me anyway, that these types of seabed fossils are found on the peaks of the Spring Mountains in the 9500-11,500 elevation feet above sea level range. The earth moves. There's no doubt about that!

The traverse back to the saddle was taken in a few different ways as our group searched for that allusive magic route. Basically, it doesn't exist! Maybe someday a trail will appear!

At the saddle, we sat for just a moment then proceeded down the 57 switchbacks.


We spent our time talking, being silly and singing. The pace was steady and a bit faster than the ascent ... ya think? We stopped a couple of times for view checks and water. The monotony claimed a few falls but that just gave us something else to talk about! A fun fun day in the mountains. Worth the drive, worth the hike and worth the scramble. 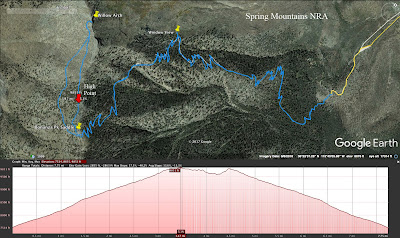 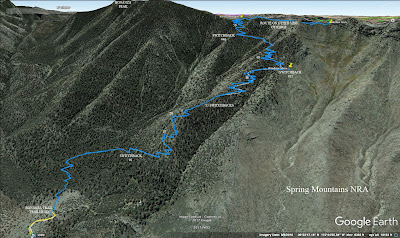 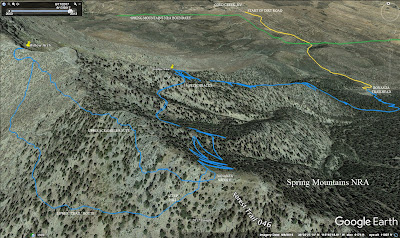 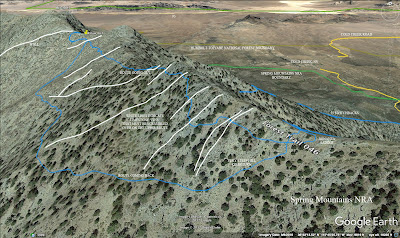 Posted by Las Vegas Cockapoo at 9:30 AM