To be fair, this was not an Around the Bend Friends hike. However, I attended the hike that was offered by the Friends of Gold Butte, led by Tom Cluff, to learn more about this area to add to our club's Gold Butte repertoire. It isn't a difficult hike and it is very easy to get to in comparison to our other hikes in the National Monument. But, the reward outshines its simplicity in colors and formations in the Aztec Sandstone of the Wilson Thrust and Gold Butte Fault, the original home of Frenchman Mountain before it traveled its way to its present location east of Las Vegas. The Friends of Gold Butte hikers were all very hospitable and happy to show the newcomer their national monument of which they are very proud ... and should be. Gold Butte NM is a treasure and plans are being made as we speak for trails, campgrounds, toilets, etc. This, however, will not be happening soon. There are a lot of things to figure out to preserve the archeological sites, the ground water, the geology, etc.

The name Gold Butte is taken from the ghost mining camp of that name that is located at the base of (Gold Butte Peak). Daniel Bonelli, an early Mormon settler in the Virgin Valley, prospected in this area and in 1872 found a deposit of sheet mica near what is now Bonelli Peak, but little came of the discovery.

The town of Gold Butte sprang up around 1905 following nearby discoveries of small gold-bearing veins. Another small-scale boom developed when more gold, and also copper, was found in 1908. The deposits were small and the town eventually faded away, but gold was still being mined at the Lakeshore Mine as late as 1941, and a few gold placer operations have been active in recent years.


So, we left the trailhead hiking on an old road that leaves on the top side of the large parking area and headed for a fairly gentle slope that would take us up to the top of the ridge to our right. Dubbed Raven Ridge because of a nesting Raven in the area, this ridge is narrow for a short distance as it unfolds above the trailhead and heads to Amber Cat Canyon. We followed the natural curve of the ridge and the view of the colorful canyon appeared. Oohing and Ahhing was heard emanating from several hikers. It is quite a beautiful sight. Beyond the canyon, we saw Black Butte, Bitter Ridge, Lake Mead and the Valley of Fire. We spent a lot of time wandering around on the connecting ridges taking several photos.

Caution #1: While wandering, care must be taken to not destroy the cryptobiotic soil atop the ridge.

Caution #2: Stay off of the edge of the ridge since the soil may not be solid beneath your feet.


At our first big overlook spot, we saw the Island in the middle of the canyon below for the first time. Then after a second big overlook, we dipped down into one of the washes that the connecting ridges made. Gently, this small sandy wash led us down into the depths of the color. On the way, we passed a mud wall that contained fossilized roots from ancient plants. It was a nice surprise for all of us. Eventually, we came to a T junction. This was the Amber Cat Canyon wash that we found! Finally at a good place to sit, we had our snack break while we puzzled over a particular yellow flowering plant. The sand in the wash was still wrinkled from a storm that drenched the area not even a week ago. We were the first to place footprints in the complicated designs and textures.

The break was leisurely then we rose to continue. A right turn put us on a path to ascend the gentle wash that led us into small slots, some of which were difficult to walk in due to the narrowness of the floor between the two rock sides.

So many colors! But, the amazing thing is that the amber colored sandstone was sooo so amber!


The first part of the canyon from our snack point junction was like this, small slotty sandstone. Fun to hike and beautiful to see. The slots slowly became a little bigger and they reminded me of the small slots in the Kaolin Wash of Valley of Fire State Park. In fact, the Valley of Fire and this area of Gold Butte are sisters in their creation! The slots opened out but the different textures remained a focal point. We wound and wiggled through the wash until the Island came into view. It looks much bigger from the bottom of the canyon than it did from that first overlook. And, it is very colorful! The Island has a large empty bird's nest on its upper wash corner and is topped by the limestone / dolomite conglomerate that is also found on top of the ridge. Interestingly, the top of the Island is much lower than the ridge elevation. Hmmm.

It took a while to hike up to the Island and pass it. So many photos had to be taken!

Also in this immediate area, we passed a white and amber rock formation that looked suspiciously like a rabbit ... or a tortoise? ... no, it's a cat! I get it! Amber Cat!


The slots continued in various shapes and forms and depths. We were in no hurry! The next point of interest ... and we still had not passed the Island ... is a humongous white monolithic boulder on the left side of the wash. My husband hates the photo (below) for it being to "garish." Hm. Well, I kind of like it. What do you think? Makes a statement, huh? So, the next few hundred yards was filled with photos of the Island as we made our approach then passed it. Just a few more wash wiggles and we were climbing up the end of the canyon wash onto the saddle above. Here, we gathered for a group photo then found the trail that would take us to the cars.

The trail is very clear here so it is good to walk only on the path so as to not disturb any of the vegetation or crypto nearby.

The trail follows along the ridge where we had hiked in the beginning. Also, along this ridge wall, there were sandstone colors and formations.


One thought: Someday ... someday ... this valley trail will have eroded down to more of the colorful sandstone that lies under the soil. And, probably, will go all the way from Black Butte to Whitney Wash. I would like to be able to see that! It was a great day with the Friends of Gold Butte! I would like to join them for more hikes. It is a great way to learn more about this area's geological and cultured past. ... Not to mention new routes! We love new stuff! 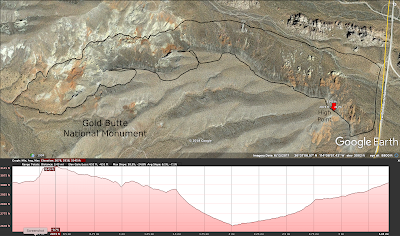 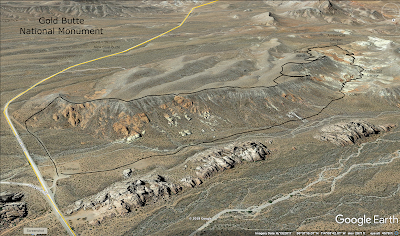 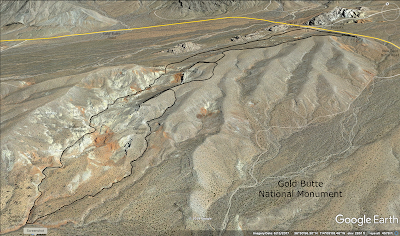 Posted by Kay Blackwell at 4:10 PM