Follow along with Rita and Kay B. (me) up and down the South Loop with autumn color. Enjoy!


Two club members opted to stay in the mountains today and hike the South Loop in an attempt to capture the amazing beauty of the changing aspens and the clear air. Hurricane Rosa was on her way up the Baja and into Arizona but Las Vegas was catching some strong winds and will have a couple of days of rain. (Nothing like what Arizona will endure.) Rita and I stepped out of the car into the strong wind ravaging the trailhead parking lot. However, we knew that much of the south southwest wind would be blocked by the mountains on the South Loop Trail. After saying hello to another club member who was also preparing for a small group hiking up the South Loop (Larry S.), we headed up the trail. It was chilly! We needed to warm up so up we went.


We didn't know how far we would hike. Just going up! As it turned out, there were many many Sunday solo and paired hikers heading up today. Everyone had the biggest smiles on their faces! Las Vegas had just endured a very hot /wet summer and the coolness was sooo welcome. After about half a mile, we turned the corner above the aspen wash field that was the result of an avalanche in 2005. The morning sun lit the aspens up like fire on the lower reaches of the grove as we hiked through them on the trail. The Echo Cliffs above were still blocking the sunlight of the upper parts so photos were difficult to meter from the bottom of the steps section up to the First Switchbacks. A little bit of photoshop rendered the "Techno Aspens" in the photo five photos up from this paragraph! I couldn't resist. (Kinda cool though, huh?)

Since I was stopping for billions of photos, it took us a while to hike up through the first switchbacks! We passed through the First Overlook where a group of hikers were playing with hammocks. (hmm) Then we continued up the next long switchbacks passing the wilderness sign, crossing the cliffy wash and on up to the Second Overlook. Here, we quickly grabbed a photo of the arrival of Rosa's front cloud bands. They were not intimidating but really beautiful. By the end of the hike, they were actually kind of surreal looking with sharp edges and very very thick. As we neared the ridge above, we watched the clouds moving extremely fast from south south west to northeast. We were still being shielded by the mountain, but every once in a while we would get a cold blast! We had tied knots in our hat strings!

We passed the Third Overlook and the clouds had already changed to a thicker display. Rita and I agreed that we could go further and we continued climbing. There wasn't a lot of autumn color in this area so we didn't stop for photos much until we reached the Griffith Peak overlook corner. From there, we tackled the last few switchbacks up through the grassy field. It was here that we passed another club member, Kay T. We said "hi" and she warned us that the saddle was very windy and cold. Not a place to stick around for very long today. She was not the only hiker to have informed us of the saddle weather and when we reached the very last short switchback to the saddle, we heard the wind howling above us. It sounded like a freight train! At this point, we still didn't feel the wind and were still fairly comfortable. Weird. Then, we hiked up the last few feet....


Yep! The wind was howling. The air was very cold. There was no one hanging around. We took our photo then dropped back down the trail a few feet to take our break. The view down Kyle Canyon was so clear, unusual. We just sat and enjoyed it. From there, our descent was uneventful after passing Larry and his group who were almost up to the saddle. We grabbed a photo at the Third Overlook since the clouds were looking better than before. But, when we reached the aspen grove again, the photos started again! Now, with the sunlight covering the upper reaches of the yellow aspens, there was a new set of photos to be taken! I hope you enjoy the photos I have offered on this blog. The first photo was taken on our way down but, starting with the second photo, you can hike along with us all the way up and down the South Loop Trail in autumn technicolor! 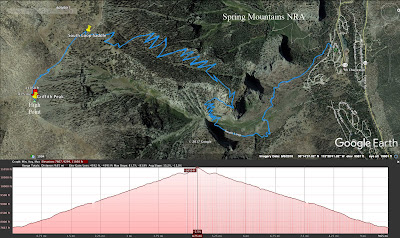 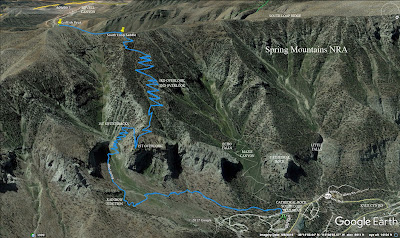 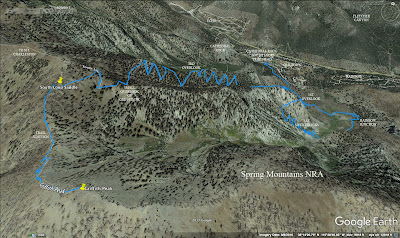 Posted by Kay Blackwell at 9:23 AM