This part of the Paleozoic Era happened from 250M to 350M years ago. Then somewhere around 250M years ago, "The Great Dying" killed off 90-95% of sea creatures. These creatures have since fossilized into limestone leaving imprints of their shells, sponges and exoskeletons.

The abundance of oxygen on Earth allowed these creatures to grow to large sizes, sometimes about the size of soccer balls. But, as seven hikers roamed the hillsides of the Bird Spring Range today, the many fossils appeared normal in size and appearance. Beautiful in their antiquity.


In the past, our Bird Spring Range hikes have concentrated on the southern portion of the area that can be reached from the Short Badger Pass Trailhead. This trailhead is located about half a mile south of SR 160 on Cottonwood Valley Road on the east side. The dirt road is bumpy with a lot of high bedrock but it can be travelled in an SUV if you are careful. Last year in this area, we established a route in the Bird Spring Range that is closest to SR 160 on the south side and called it Bird Spring Stair Climb. Subsequently, a piece of the puzzle laid there in between this and the old Bird Spring Range route that reached its southmost point where we could see the small town of Goodsprings in the distance.

If you take a peek at the last map of this entry, all of what I just said might be a little more clear!

Anyhoo, we started the hike by leaving the trailhead going north. We didn't turn right onto the Techno Trail to climb up over to Badger Pass. We continued straight then curved around the end of a ridge.


When a trail junction came into sight ahead of us, we turned right on a bushwhack straight up a long ridge. The ridge is mostly pleasant until the end. Then it gets a little steep. But, the views of Potosi and Red Rock are very nice. One word of caution: there are bighorn ticks in this area so try to avoid the brush. (We found 3 today.) Finally at the top, we found a log book that said this was Peak 5140. The log was established in November of 2016 and there were only a few names since then. Our next target was to get down to the cliff-sided ridge below us. As we were scoping our route, we saw two small groups of mule deer below us.

The mule deer were so healthy looking that we entertained the thought that they were elk! But, on closer inspection of the photos, I saw that they were dark colored mule deer. The upper group went scampering over the ridge. The lower group sauntered down.

Finding our way down to the ridge, more views opened up. It was right about here that the cliffs on the east side of the range became precipitous. Our route intended to traverse along the top of the ridge above the cliffs.


As we roamed along the top of the cliffs, there were two or three rocky upthrusts that we circled around on the west side. Sometimes a game trail appeared ... then disappeared. We continued our search for fossils and found a few more without trying very hard. The views all around us were magnificent. We could even see the Las Vegas Strip rising slowly from behind some of the northeast hills. Being right around the 5000' elevation level, we saw several Joshua Trees and Mojave Yuccas. Otherwise, the brush included Creosote, Turpentinebroom, Cacti, Desert Trumpet, Blackbrush, and Sagebrush. ... And, probably a few more desert dwellers! Each one of these low-lying plants were potential tick bearers. Most of the time, we could easily skirt around them.

As we walked along the ridge, we were going in a general up and down descent until we came to the last climb. It was steep and it was long!

Our route to conquer this climb was staying next to the cliff but ... not too close! We were sprinkled on with cold sleet for about 30 seconds! One by one, we all got up to the top and found we were on the initial peak of the Bird Spring Range hike. Peak 5294.


We stopped for our break here. There were a few rocks to sit on and the views were widespread. So, potentially, the hike could continue from here along the ridge to the Goodsprings overlook but, that last climb was a doozy when added to the initial climb to Peak 5140. We were ready to descend! So, after the break, we turned right to make our way down the gentle ridge toward Badger Pass. On the way down, we completed a small curve to the left then turned right onto an old road / trail. This took us right into Badger Pass, a 4-way junction of bike trails on a small saddle. (BTW, the trail marker here, does not say "Badger Pass!" I wrote that in with Photoshop! (See fourth photo below.)

The weather was holding. I guess the rain cloud had passed. We could see the rain clouds building in the northern parts of Red Rock, far from us. Bluer skies to the south.

On this wind prone range, we had had very little wind today. It was a pleasure to not have to brace ourselves as we enjoyed the views.


At Badger Pass, we had a choice of taking the Techno Trail over the hill and down or to descend to Red Valley and hike out. Enough climbing for today, we hiked down the switchbacks to Red Valley and enjoyed the picturesque small canyon on the somewhat muddy trail back to the cars. As we approached the trailhead, Peak 5140 was in sight to our east northeast. Very nice group of hikers today. Always a pleasure to hike with David Hardy. 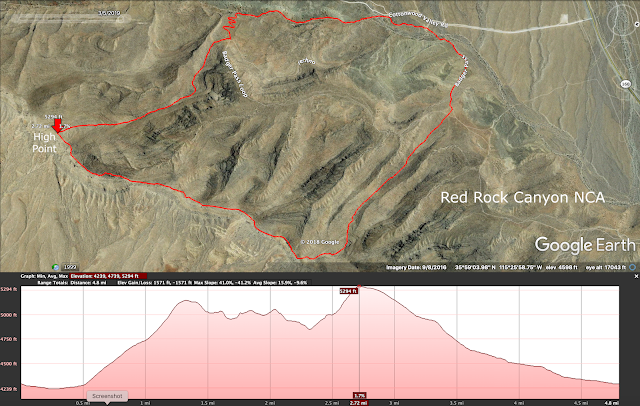 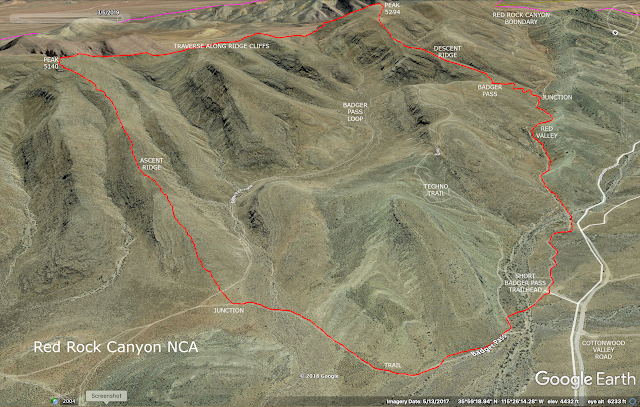 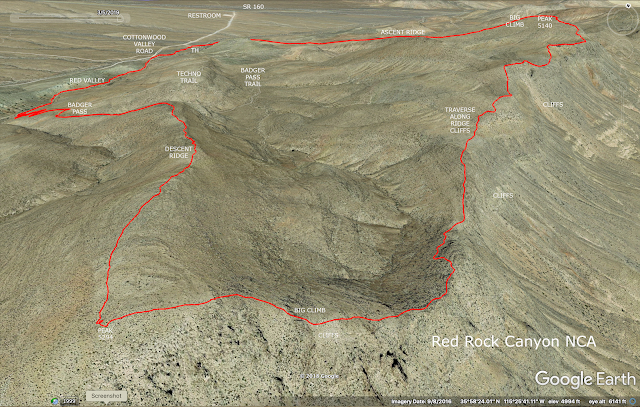 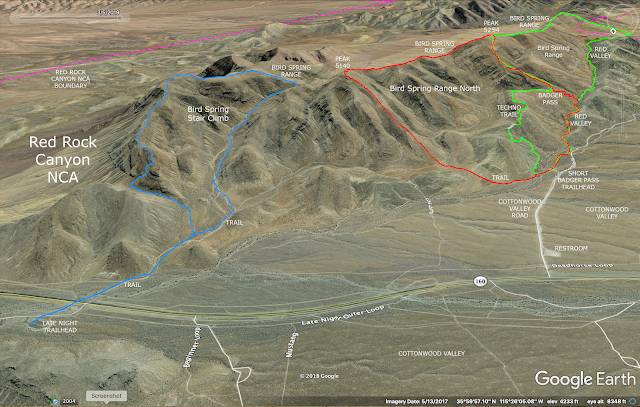 Posted by Kay Blackwell at 8:26 AM