The trip up to Gold Butte Little Finland is long and the last thirty miles are very bumpy! When we emerged from our cars at the petroglyph wall to start our hike, twelve hikers were duly shaken up. Although the last four miles were a little worse for wear from the recent rains, it was still drivable with a high clearance vehicle and we had three of those. After a stop at the comfort rocks, we began our hike into the back door of Little Finland.

A gap in the wall to the right of the petroglyphs beckoned us. Then we hiked a more or less straight line from there up to the ridge and a high point rock.


Circling around the high point rock to the left, we found a feint trail to the end of the plateau. Here, we turned right to drop down through a sandstone passage arriving at the eastern end of Little Finland. Little Finland has several names but, in our circles, this is the most used. This area is called this due to the large area of rock fins that have been created through erosion of weaker stone surrounding the fins. The result is a beautiful fantastic arrangement of squirrelly sharp and delicate rock protrusions sticking up and out from the landscape.

The area is also decorated with white mineral deposits that add to the whole scene. The overcast skies of today added bright red color to the photos. Blue skies would have been nice but we were blessed with the clouds due to the higher temperatures. The clouds hung around for almost the whole hike and we were happy!


Since today's group was small, we stayed together as we rambled through the area. A few photogs got their shots and we gathered again at the fence on the west side. John B. kept everyone laughing when the hike slowed down. But, in the end, the hike was accomplished a little faster than the two previous years ... probably due to the smaller number of participants.

After passing through the fence, we took the road down to the playa below the Little Finland plateau and crossed over to Red Bluff Spring. There were no campers here as in years past.


We ducked under the fence at the spring then hiked along the waterway in the mineral filled red mud. This trail led us up to the fence above us on the right, through a hole, then on out to the corral by the road. It appears that the corral is still in working condition. We took a water break here then continued across the road and up a small wash following the first of many cow trails along the route.

We hiked across the desert and ended up near the base of Baby Butte where we had our first snack break. Everyone was still feeling pretty good.


After the break, we found the cow trail that crossed the deep wash near us and hiked across the desert to a fun crack to climb up. On the next level of red rock, we circled around to the right and saw the balanced rock in the photo to the left. From there, we entered a small slot in the red rock wall where there are several very interesting petroglyphs. This must have been a very special place to the ancients. The intimacy was palpable as we explored.

As a precaution, please respect this and other sacred areas here at Gold Butte. Do not touch the writings. Do not deface the walls. And, respect those who came before us.


We exited the small slot then circled around the walls to the right coming to a high cliff above the Subway area. Most of us dove over the cliff with an exciting scramble while three hikers took the more sensible route down. We perused the walls outside of the Subway, first. The petroglyphs here are quite faded. Dick W. climbed up in the small crack to the right of the Subway entrance and checked on the petroglyphs there. Next, we submerged between the tube-like walls of the Subway, aka the Grotto.

The light in the Subway, as it was in the small slot, was optimal today. Could be the time of year or it could be the diffused light of the overcast skies. Even the dark end at the rock fall was more visible than usual.


Next, we began the Boulder Canyon scramble portion of the hike. We climbed out of the Subway in a side entrance, circled around the end point of the walls to the left, then staying as high as we could, we scrambled over the huge boulders until we arrived at a grassy meadow. From there, the canyon became very narrow and the brush began ... including many catclaws. Every year, we trim the brush back as we go but, this year, we forgot the clippers!

Fortunately, the brush could have been worse. Yet, several scratches were suffered. At any rate, we passed two coyote lairs on the way. (BTW, we also saw a mountain lion print earlier in the hike.) Finally, we emerged from the brushy part of the hike and climbed up on the wall to our left.


We traversed across the plateau then came to the Lubinski Point descent. Many hikers of our group opted to follow John who led them down the opposite side of the canyon, an easier descent. The remaining hikers sidled down the steep sandstone while the others joined them not wanting to miss the fun! From here, we hiked straight over to the top of the Subway and dropped into it on the opposite side from which we exited. Another snack break was taken outside the Subway entrance.

The sun was beginning to make an appearance so the remaining hike back to the cars would be on the warm side. The predicted harsh wind never transpired. So, tired or not, we started back toward the cars with a good pace.


One last point of interest provided a small short cut. We cut through a small box canyon near Baby Butte on the way back. This required tired legs to do a little more scrambling up and down and up. But, variety in muscle use is always a sign of a good hike. We emerged from the short cut and the sun was now beating down on us. Thank goodness that the sun waited as long as it did! One more mile across the desert, down to the road, onto another cow trail and over to the cars and we were done. Done. Great hike! 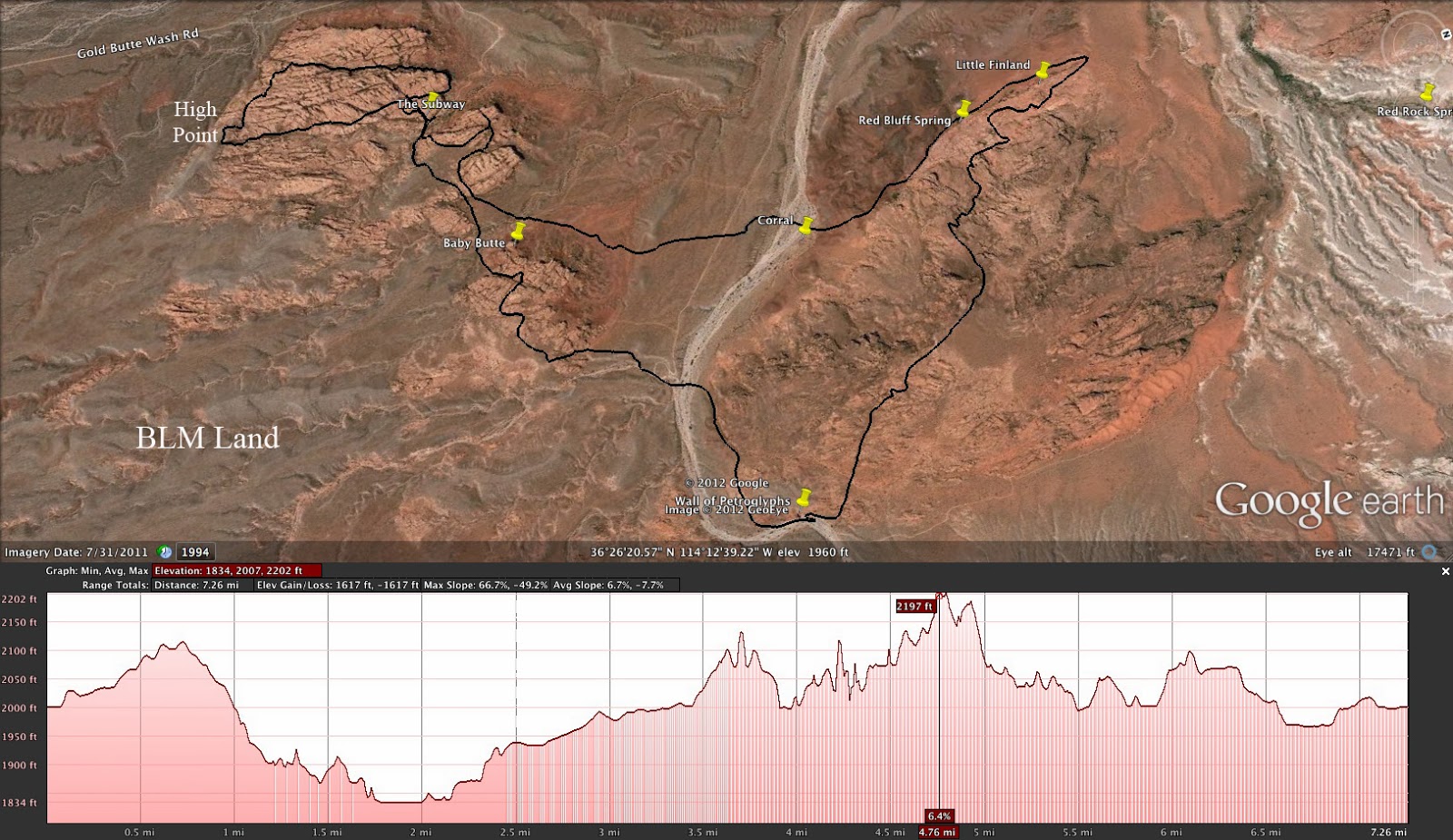 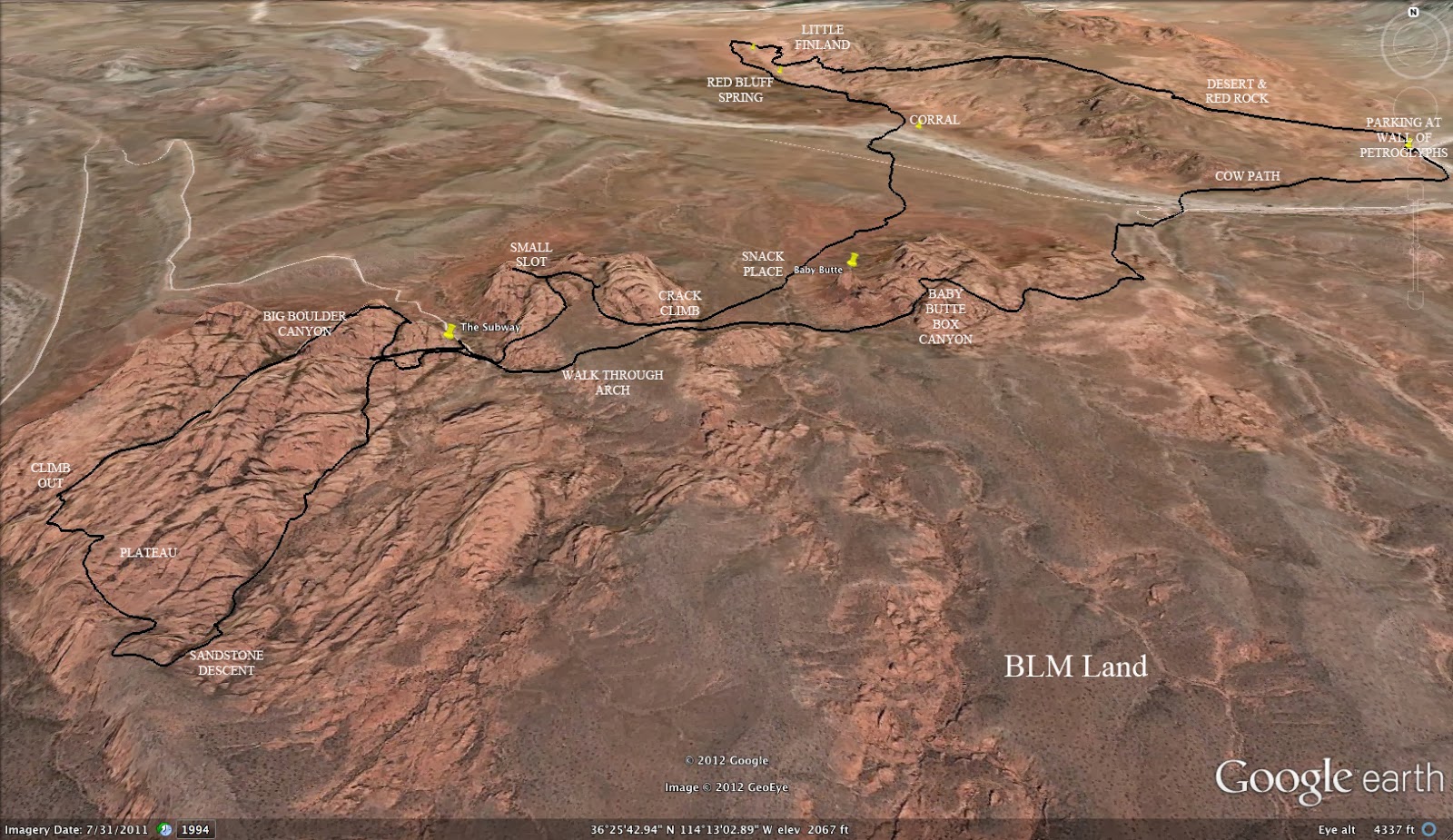 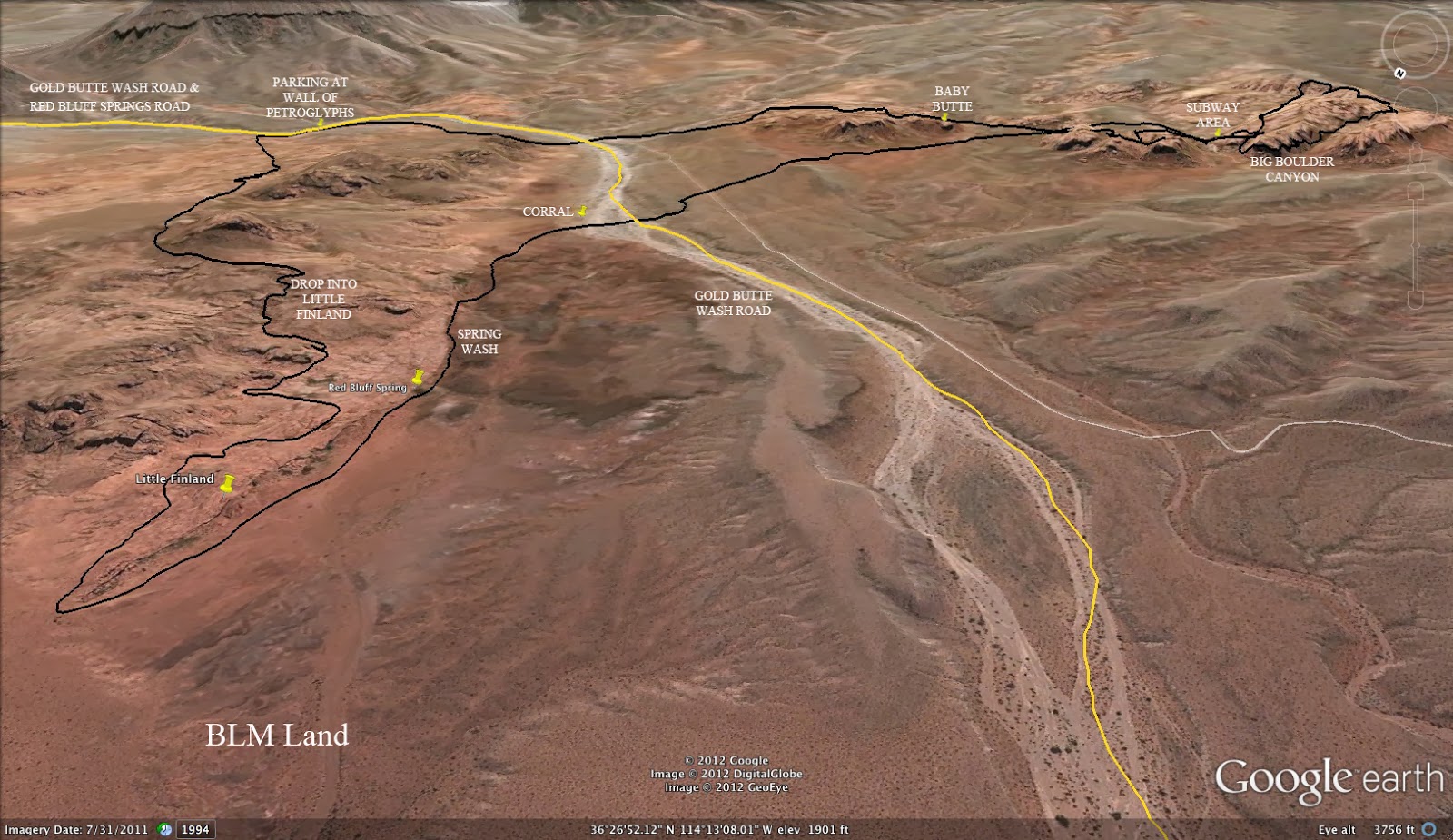 Posted by Las Vegas Cockapoo at 11:21 AM