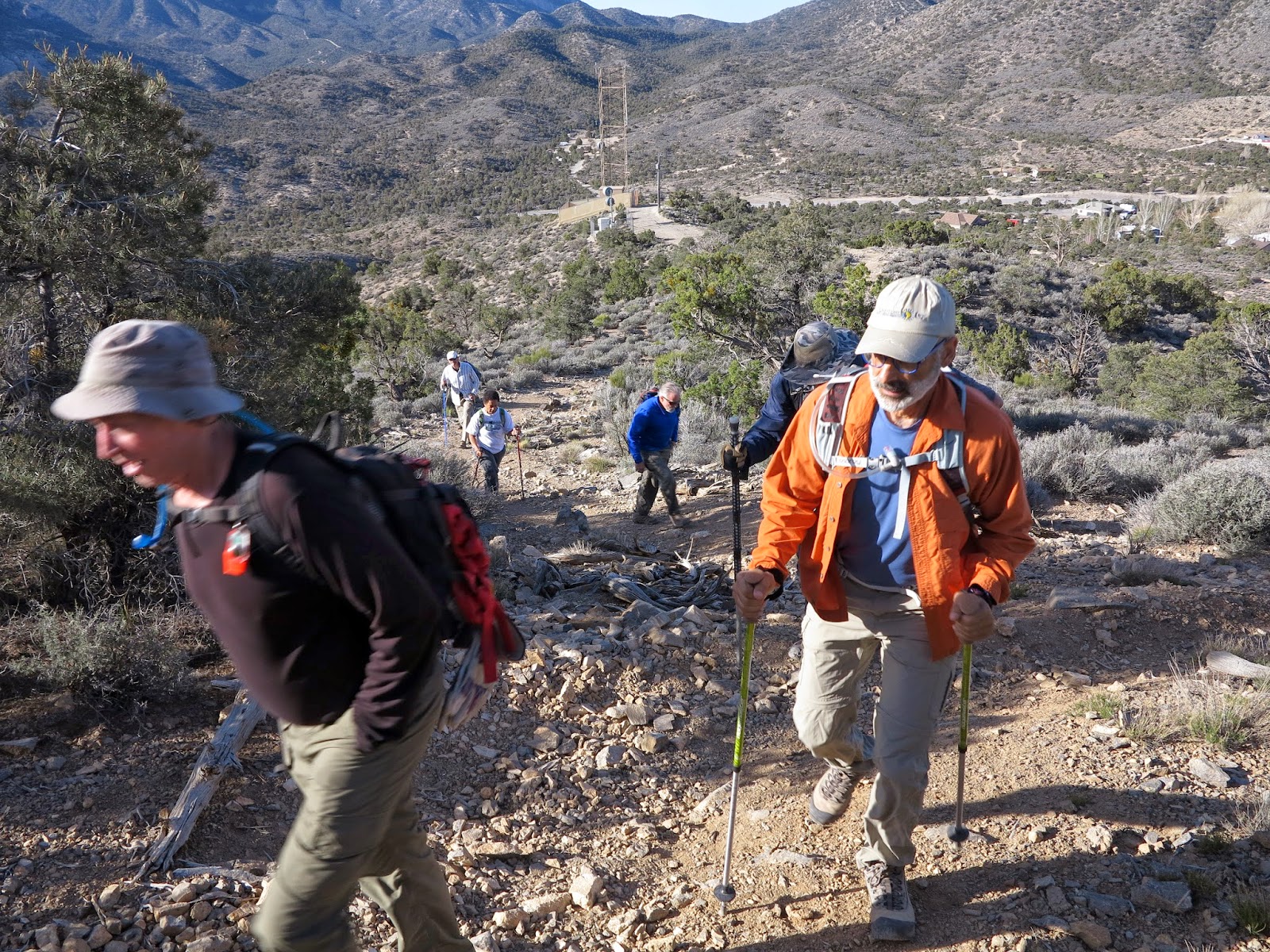 Windy Peak is the second peak from the southern terminus of the Red Rock Canyon NCA escarpment. The hike is a very old standard of the club. It is always fun to take newbies up and, today, out of twelve hikers, there were at least six. We parked at the Mountain Spring trailhead at the top of the Highway 160 mountain pass and began our climb up heartbreak hill. The climb up the hill was not as rushed as it was on Thursday.

The newbies needed a leader to show them the way so Kay stepped up to find the sometimes elusive trail and Lettie, the coordinator, hung back to the sweep position. 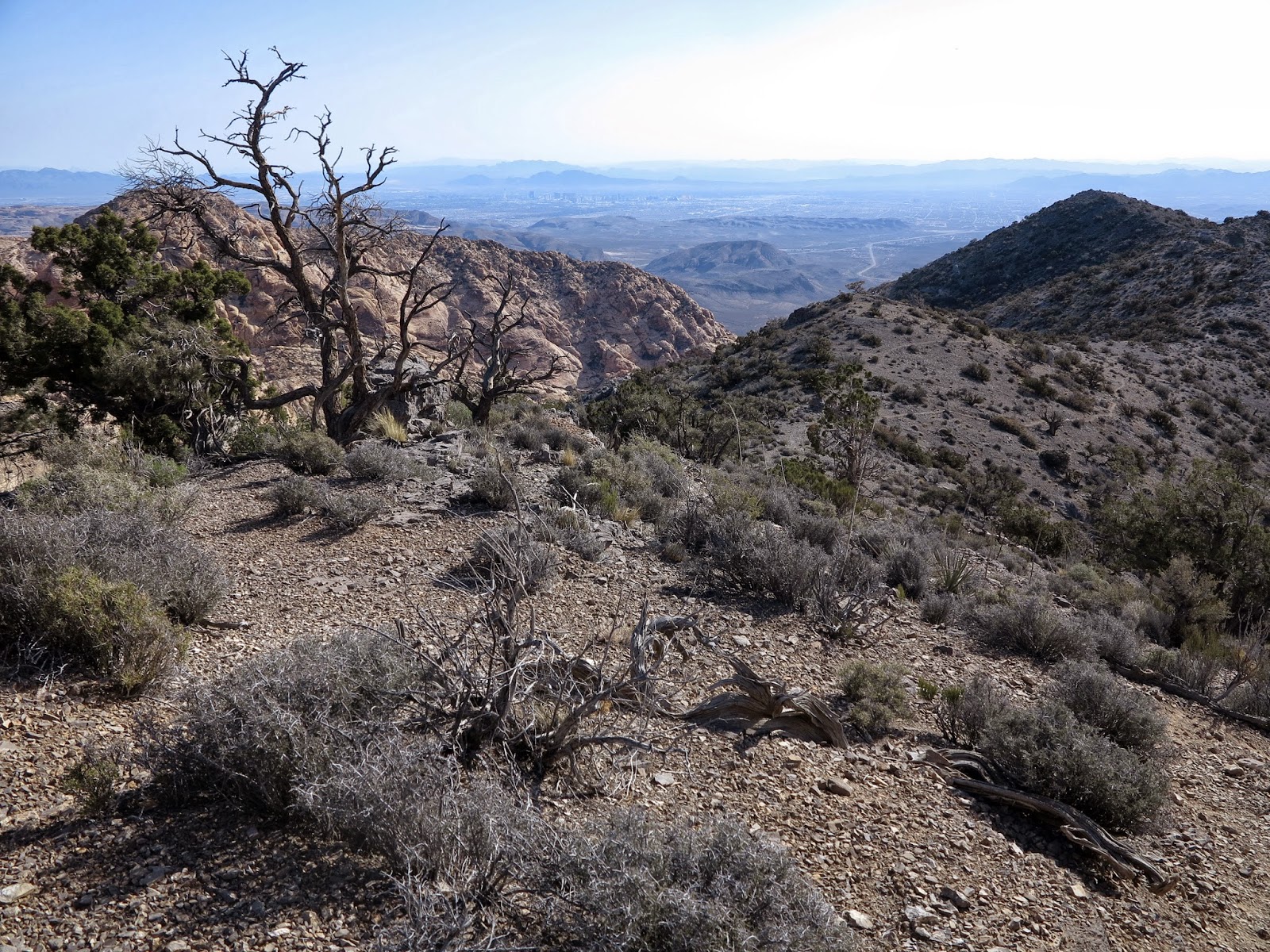 We stopped just a few times along the escarpment trail and Windy Peak approach trail for water. There was a cool wind that gusted occasionally but the air was fairly clear. We stayed on the route with the help of many cairns that seemed to have popped up over the winter. We assumed that the bighorns have figured out how to stack rocks! Anyway, soon the sandstone came into view with Windy Peak in front of us, Hollow Rock Peak to the south and Black Velvet Peak to the north.

We dropped down to meet the sandstone and faced the only exposed part of the route. This refers to the climb along a crack (as seen in the photo below) in the sandstone to reach the sandstone plateau above. 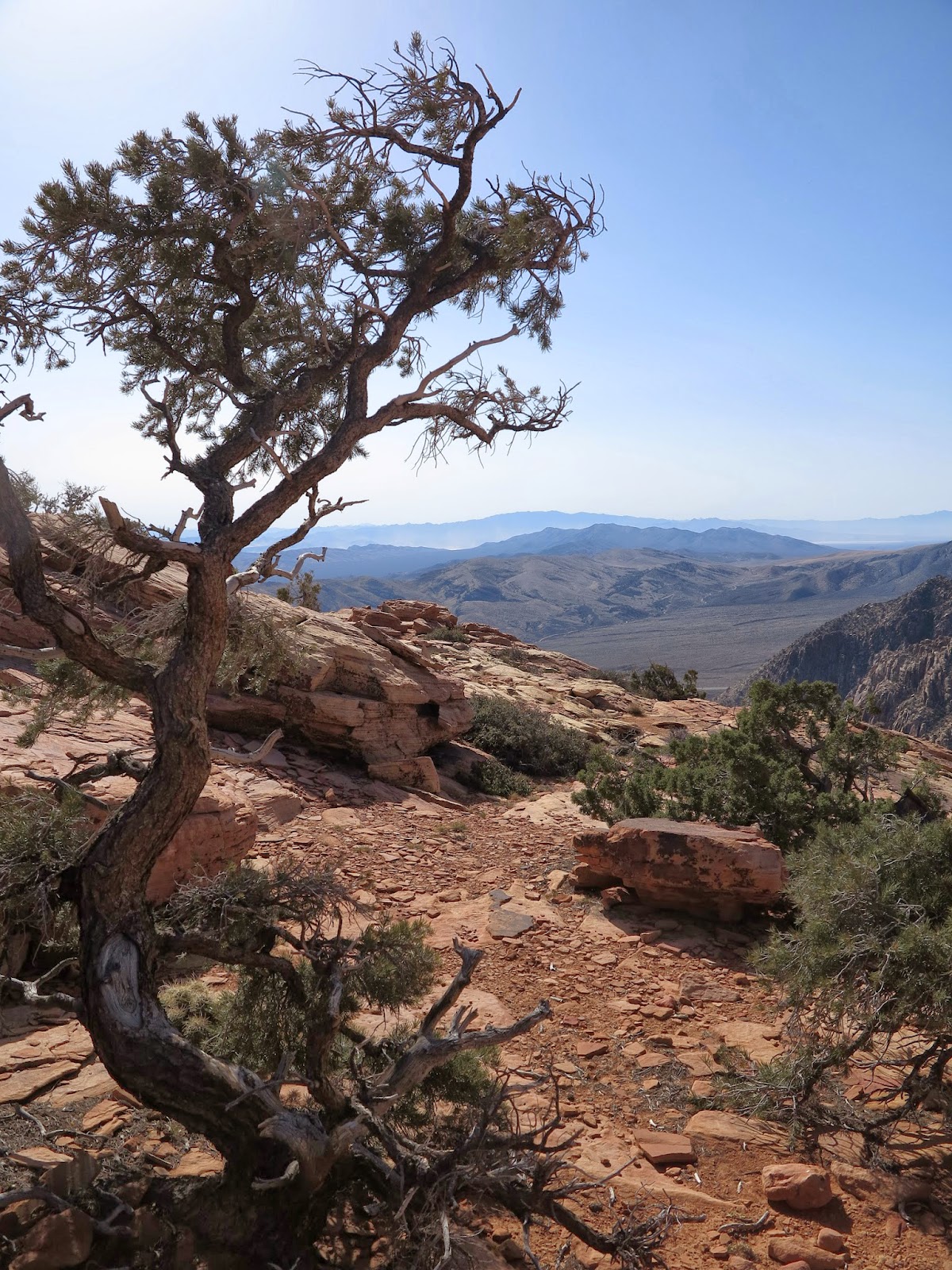 We continued to be aided by cairns, however, the route is memorized by club members that have hiked Windy Peak several times. There are a few places along the sandstone that are better navigated if you know where to go. Otherwise, some backtracking may be required to get around small cliffs and large boulders. When in doubt, it is better to stay to the right as you go up. The high cliff that hangs over Muddy Springs Canyon is on the left side.

When we reached the peak, a few hikers took a side trip out to the eastern tip of the Windy Peak projection. (BTW, someone left a solar powered camp light near this tip. Perhaps, they are using the small light to mark the tip at night from the air. Yes. Must be.)

We took our break and signed the register. Windy Peak is one of the most beautiful peaks of the escarpment with its wide area of reddish sandstone sloping down on the south side.


After the break, we made our way back across the sandstone and down the crack. Finding our hiking sticks where we left them, we climbed back up onto the limestone approach trail. From there, we hiked back to the high point and down to the escarpment trail. Kay almost missed the saddle junction but was set straight. Then we dropped down about 10 yards and turned left onto a small previously unnoticed trail. On a hunch, we took the trail and ended up on the burned ridge that is an optional descent for the hike. None of us had led down the ridge before so we made it back to the cars in a somewhat awkward fashion. It was a hoot anyway! 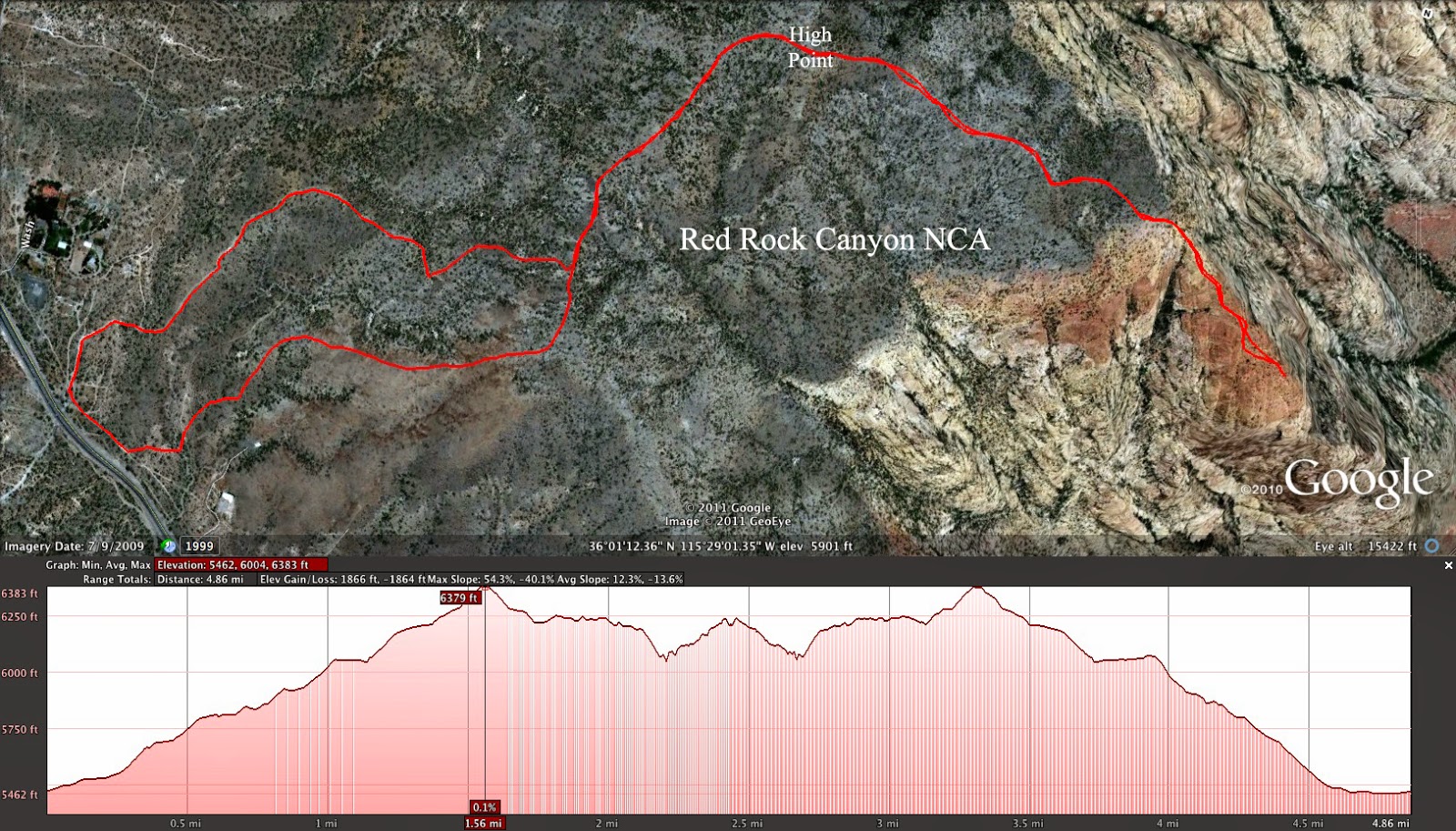 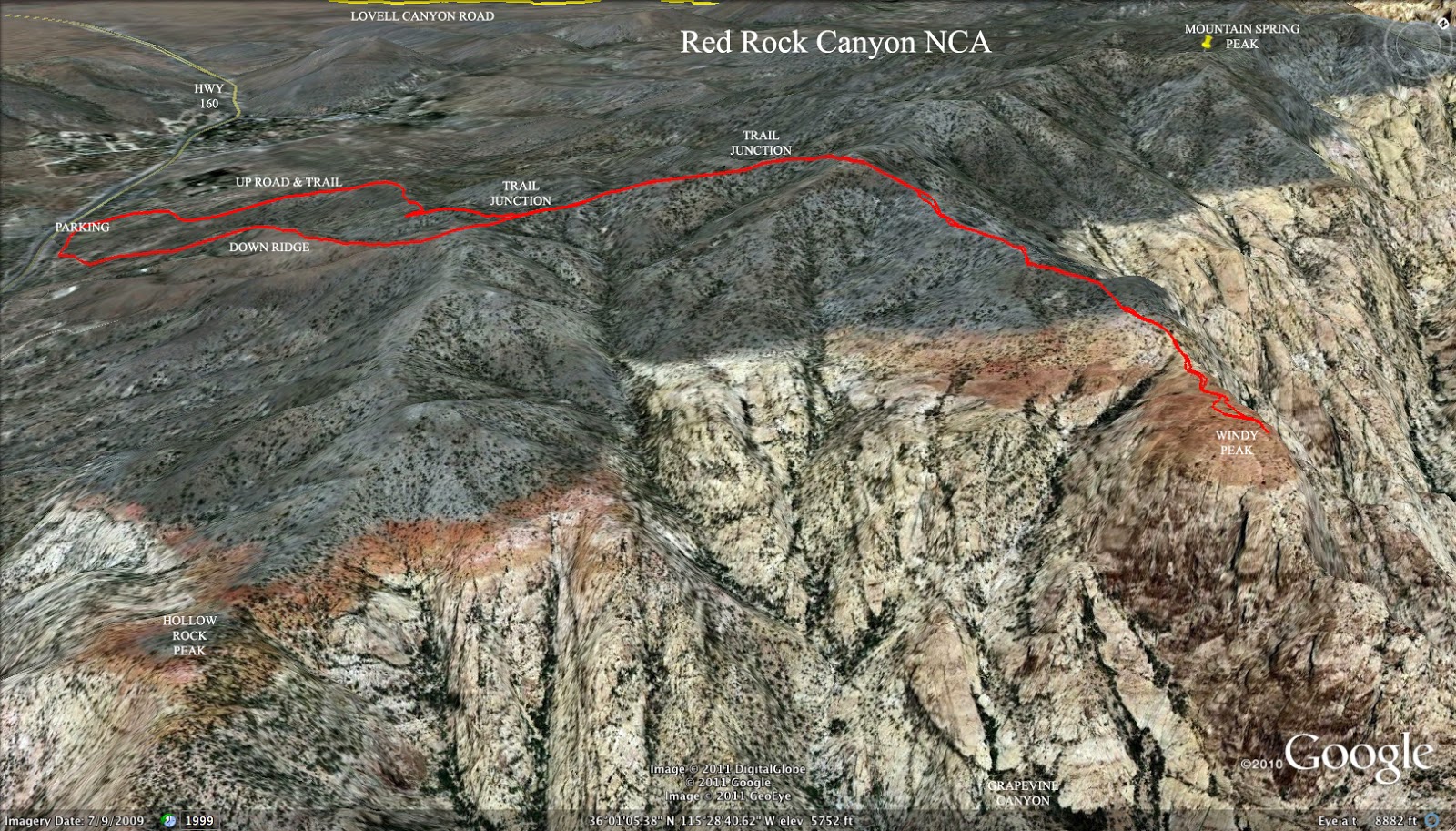