The West End Wash / Anniversary Narrows Loop hike (affectionately known as the End Around Loop) is an old route used for years by Las Vegas hikers. However, today was the first time the Around the Bend Friends Hiking Club logged its twelve miles. Appropriately, there were twelve hikers who began their adventure at Northshore Road's mile marker 13 where the West End Wash crosses the highway and Route 41A (Borax Mine Road) junctions. We headed north away from the lake. There is a bright redstone wall on the right side of the wash here and the road wash is very wide.

A little under a mile into West End Wash, we turned onto our next wash to the right. We had started noticing yellow crime scene tape tied to catclaw bushes on the right side of the road. Not there before, said Chuck. Finally, we came to a pile of junk and a boxed hole in the ground on the right side of the road behind some bushes. Our imaginations ran wild but we didn't see anymore yellow tape after that!

Just past our junction of the third wash of the day, Chuck pointed out a very nice arch at the top of a hill on the left side of the wash curve. Most of the group of hikers decided a side trip was welcome and climbed up to see the arch in person. On the return, we back-tracked just a little and headed out our third wash which was, again, on the east side of the road. This was a smaller wash and did not have vehicle tracks in it. As we hiked, the landscape started becoming more colorful. The trail led right into a redstone box canyon. The comglomerate rim rock had fallen into the canyon and we found ourselves among a pile of huge boulders.

In front of us, Chuck pointed out the "spout" of the dry fall. We needed to get up there but there was no way to climb up so we set about climbing boulders to go up and around.


We had fun with the scramble and took a break when we reached the top of the spout. The view below us is seen in the first photo of this entry. There was a small arch and a square shallow cave on the hill above us. The wash continued without the high walls and we noted many red barrel cacti lining the route. The mountain we had to hike around was now in view ahead to our right. This is the mountain rising up to the northwest of Anniversary Narrows.

Our task at hand was to climb up to a small saddle behind this mountain, then drop via an interesting wash down to the large gravel washes above the narrows.


We had a choice of washes in front of us. Not wanting to miss the correct wash, Chuck led us up onto the base of the mountain to our right then began encircling the slope. From our vantage point, we could see the correct wash below us but we were already up high enough to stay put and junction with the target wash near the saddle. At any rate, we also got high enough to have a nice view of the snow-capped Spring Mountains in the distance. It's fair to say, we enjoyed the higher elevation of the detour even though the steepness of the terrain was a little tougher than if we had stayed in the washes.

We dropped into the saddle wash not far below the saddle, then began our descent down a small rugged wash working toward Anniversary Narrows. We noted an interesting small trail leading in an opposite direction at the saddle. Game trail? Trail to one of the Muddy Mountains behind us? Not sure.


The rugged wash was easily hiked by dodging rocks and bushes. However, eventually, we came to the expected but dreaded huge non-negotiable dry falls. The first (and smaller) dry fall had a large pool of water at its base so we had to climb completely around both of the falls up to the left of the trail. This route is steep and loose above the precipice so, thankfully, Chuck led us down to the next wash over the ridge and we scrambled down it to junction with the original wash below the two dry falls. When we reached the original wash, we revisited the largest dry fall at its base then sat down for a much needed snack break.

Our break lasted long enough for Paul to eat a sandwich (that he made himself) and an apple. Then, we were trekking again. There were two more areas of concern coming up before we were done with the obstacles.


Due to the recent rains, the wash was filled with mud and a few pools of water. Most of the pools were easily circumvented. However, one pool, seen behind us in the photo above, covered the trail and we had to use our skills to get around it without getting our feet wet. Immediately after this, we faced a mud hole. Again, we used our skills. Susan is demonstrating the technique on one side of the wash while a few of us did similar calisthenics on the other side. Just after this, we traipsed into one of the wide gravel washes that flow into Anniversary Narrows and followed it down for almost a mile before diving into the daylight washed walls.

Anniversary Narrows has several faces. The morning face, the daylight face and the evening face. And, multiply those three faces with every day and season of the year. Today's face was beautiful, as usual.


We hiked through the narrows to come out the other side where the mining company seemed to have been on furlough. There was no telltale machinery anywhere. We hiked past the old rail tunnels up on the side of the hill then turned right to climb the steep trail up excitedly passing a few blooming bear paw poppies. The trail led us to the old mining camp ruins but the area has now been relegated to a shooting range with all the trimmings. (We just learned this today and, yet, here we were.) "Tresspassers will be prosecuted," the signs say. Luckily, there were no people there today so we quickly passed through the area following the Borax Mine Road (41A).

41A was built back when the old mine was in operation. The new mine owners have kept the road in good condition and have even added an up and around road so that vehicles are not required to travel through the rugged wash that we hiked through today.


We followed the good road until the older road junctioned with it, then we turned left onto the old wash road. This road led us down to junction with the second wash that we hiked earlier in the day. When we reached this junction, energy supplies and body parts were just about out. With just over a mile to go, we determinedly hiked back down to West End Wash and out past the bright red wall to the waiting cars. A fantastic adventure! 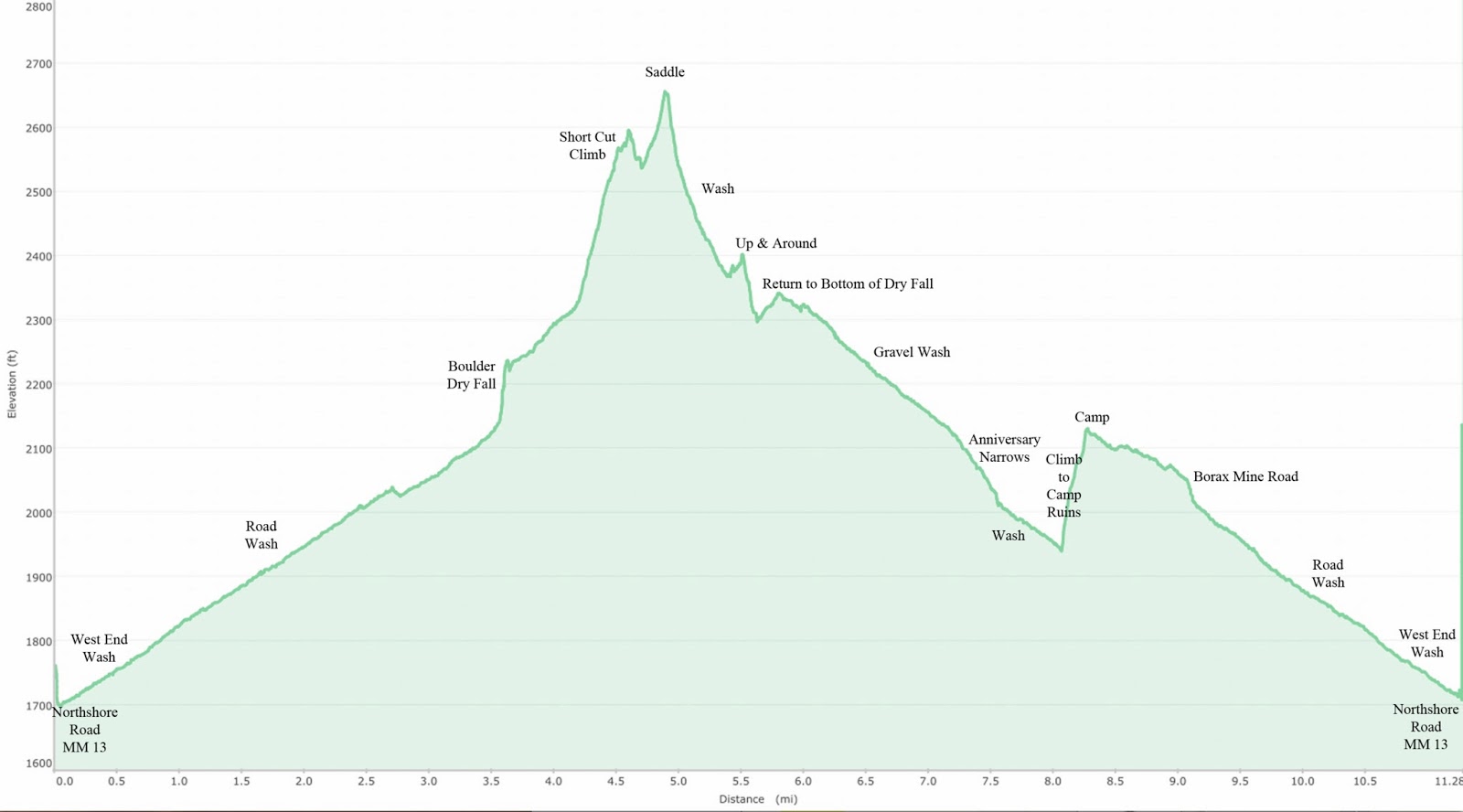 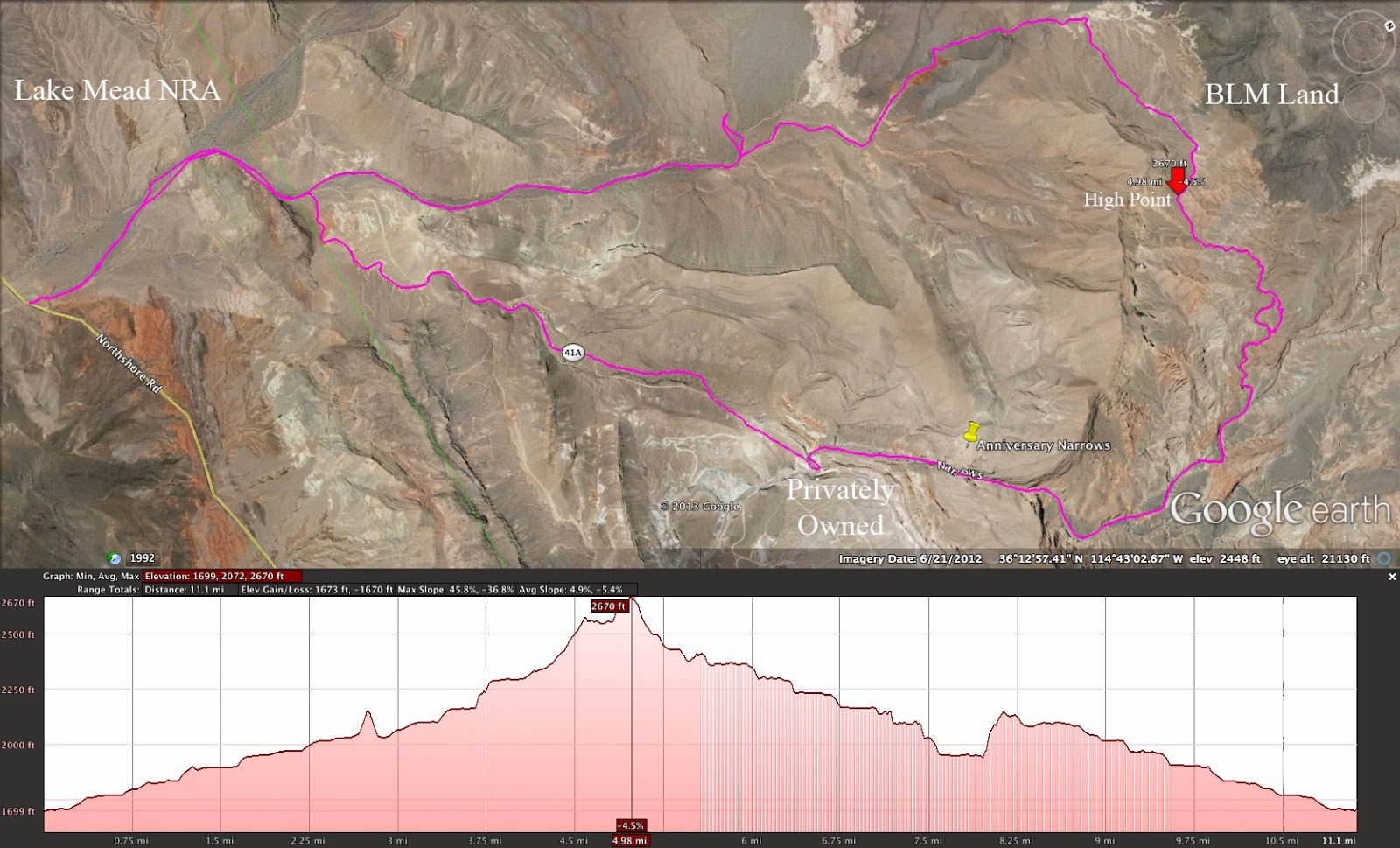 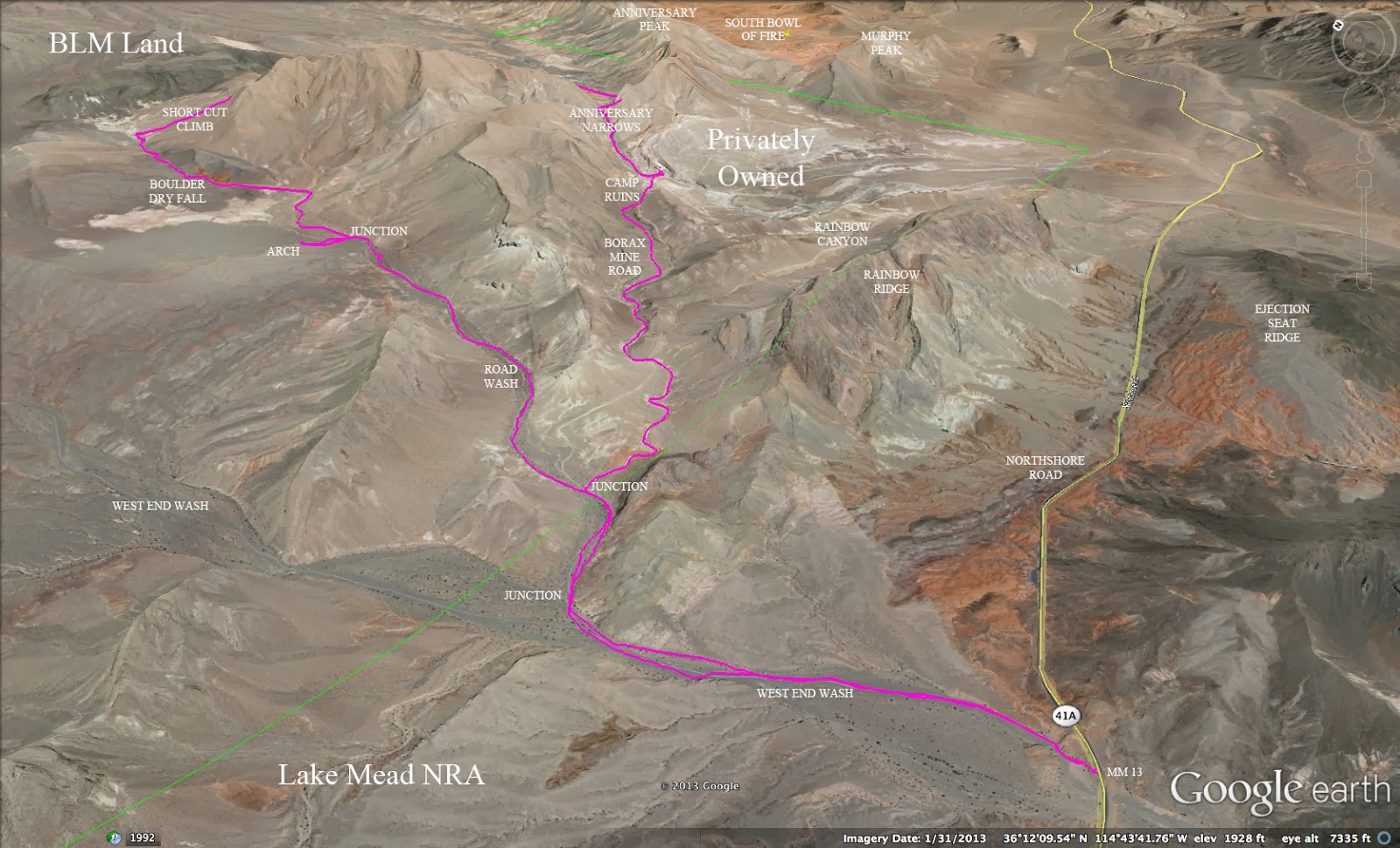 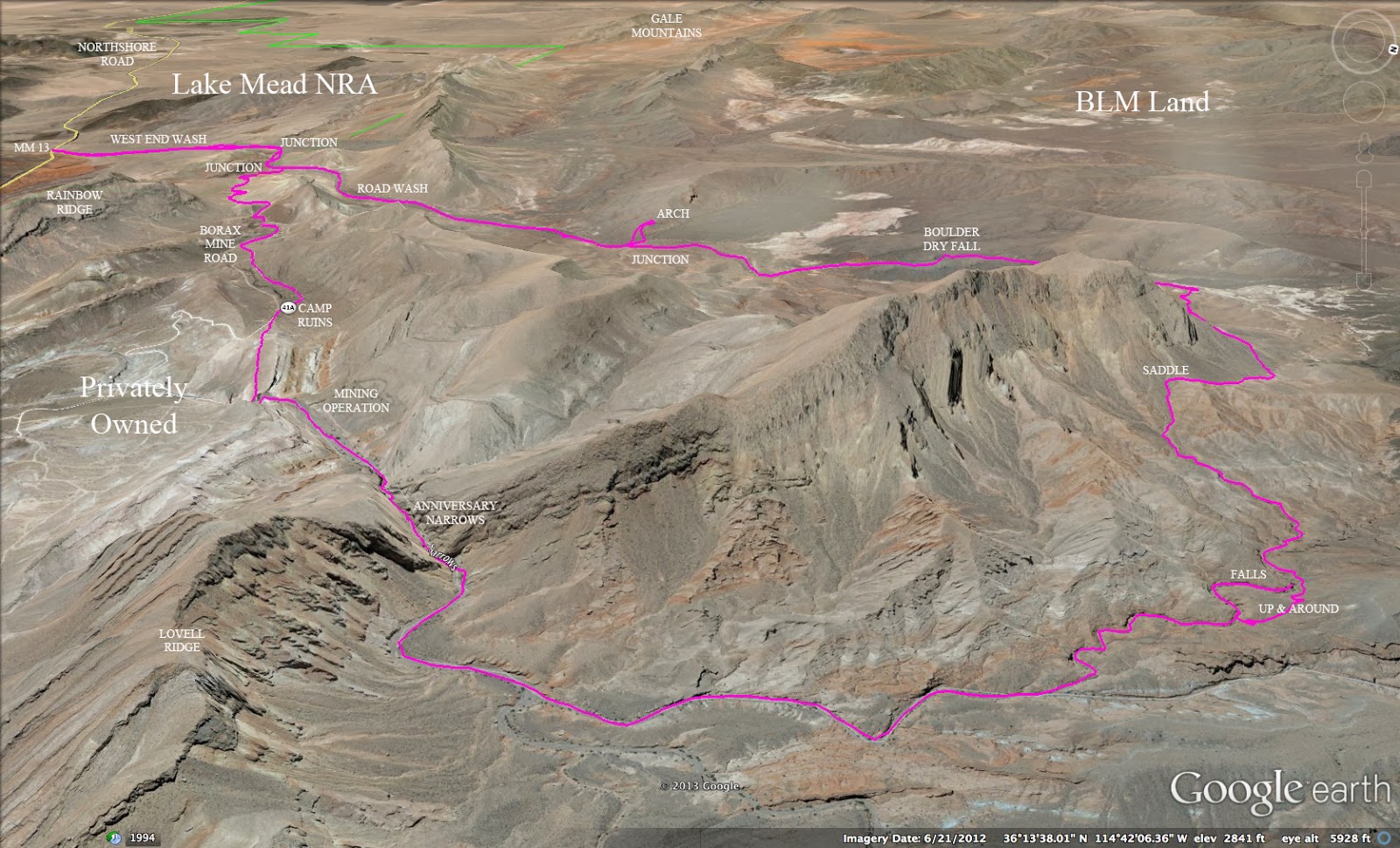 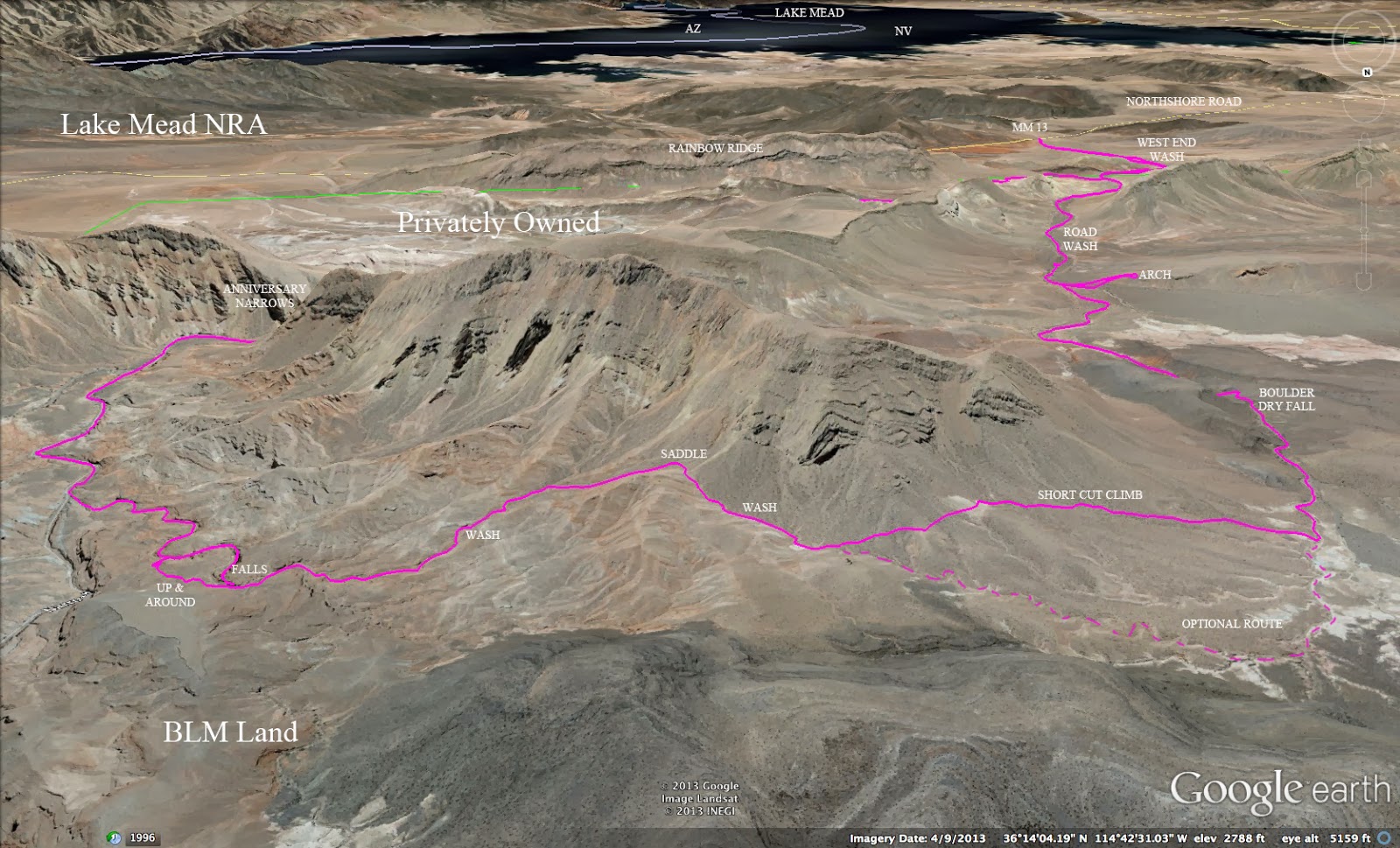 First rate narrative and photos as always! Especially loved your daylight through the narrows shot...WOW!