Oh, what a beautiful mornin'! Sure, there was rain in the forecast but nine hikers showed up for this moderately paced hike in Kyle Canyon and several others showed up for a more difficult hike over in Lee Canyon. It's just water, right! So, the nine hikers drove all the way up Kyle Canyon in the Spring Mountains NRA to the Mary Jane Falls Trailhead. The air was super fresh and the temperatures were perfect. So far, so good. We hiked up the mile of approach to the fork where the Mary Jane Falls trail turns into the trees on the right.

After a short break, we stepped over the fallen tree and continued up a little ways and forked off to the left. After following the trail over to the wash, we started to drop down into the limestone gravel when we heard noises coming from the brush in the wash below.

Three young mule deer bucks were foraging and sauntered away when we approached. Their antlers still had young fuzz on them. Soon after that, we saw one more as we started up the canyon wash.


To enter into the Big Falls Canyon wash, hikers need to stay near the left side wall here. So, we curved around that wall and headed up while being very careful of the slippery limestone on which we were climbing. Our pace was moderate as we methodically picked our way up through the rocks and fallen trees. About half way up, Obstacle Rock came into view where it is lodged in the crux of the narrows. We found our "up and around" on the left side and carefully negotiated it on a slippery hillside.

At the bottom on the other side, we got back into the wash as we scratched our way through the thistle and other sharp plants. By the way, someone has removed the rope ladder on Obstacle Rock as a measure of safety.

A good rule of thumb for the Big Falls hike is to stay in the wash as much as you can. (Of course, with the exception of the trail around Obstacle Rock.)


At the top of the canyon wash, we curved around to the left and saw the Big Falls alcove. During the snow melt season and, presumably, big rainstorms, Big Falls turns into a torrent of falling water and debris from approximately 90' to 100' above. Today, it was dry. Bone dry. And, we didn't want to push it with the rain clouds sneaking in overhead. So, we finished our short break and started back down the slippery wash hoping that we would get back out of the wash before it started sprinkling.

We used the same up and around for the Obstacle Rock area on the descent. Our speed slowed to a crawl here. We were still dry but one hiker did report a single sprinkle.

Finally at the bottom, we climbed out of the wash on the left side and made a short bushwhack over to a nice gravel trail. This old trail led back over to the junction with the Old Mary Jane Falls Trail.


The Old Mary Jane Falls Trail was used before the switchbacks were cut. It appears as an old road trail that takes hikers almost straight up to the falls area. It is steep and, in some places, a little loose. There are fallen trees over the trail in several places. Climbing this trail is quite a workout but affords views of the canyon that cannot be seen from the nearby switchbacks. The final part of the climb includes a relatively flat section and then an even steeper section through some loose scree. Then ... you are there! Right at the base of the falling water.

We did not choose to hike over to the cave this time around because, as soon as we sat down on some rocks, it started sprinkling big drops of water.

We moved the party over to the rocks underneath the trees where Mr. Chipmunk lives and then the rain stopped. While we sat for our longer break, we started hearing a loud roar that, at first, sounded like a jet engine.


The next roar was definitely thunder! Reluctantly, we gathered ourselves and began descending the switchbacks of the New Mary Jane Falls Trail. Although we never saw lightening, we heard several bouts of thunder as it rolled continuously through the canyon in which we hiked. As we neared the trailhead, the raindrops got bigger and fell closer together. By the time we reached the cars, it was raining hard enough that we needed to hurry. Fantastic morning! Back at the garage, we came in at the same time the other group did. Apparently, they got soaked! Big smiles on everyone! 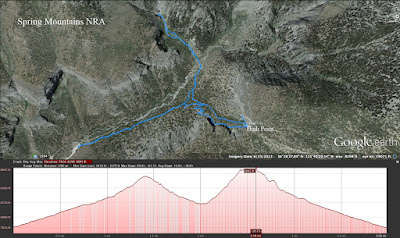 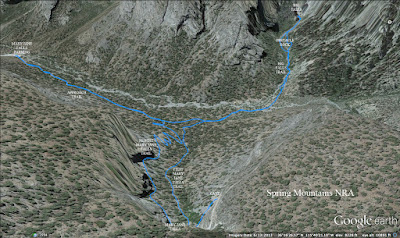 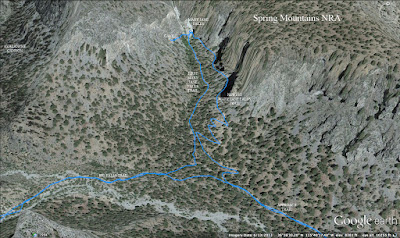 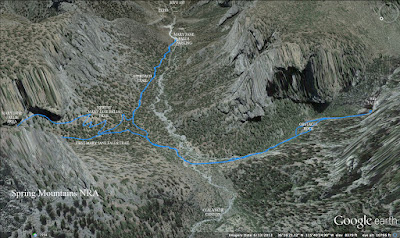