There's nothing like a good small scramble to help begin making the transition from hiking in the Spring Mountains to hiking at Red Rock Canyon. ... If, in fact, you spent the last five months in the upper elevations. Five hikers came out for a short, beautiful and refreshing scramble up to the smaller peak of Red Cap. We parked at the Sandstone Quarry parking turnout of the Scenic Loop in Red Rock Canyon NCA. The route followed the Calico Tanks Trail and turned left at the Rattlesnake Trail junction. After hiking through the slot seen in the photo above, we turned up to the right to begin a traditional scramble up.

We circled behind the red rock and headed toward the first climbing obstacle. It is a 3rd class scramble up through a crack in the sandstone. The rock is worn smooth from the many feet that have found their perch.


Next, the route finds its way through another slot crack, up some steep sandstone that requires "sticky" hiking boots, around through the sandstone boulders and, finally, up through yet another crack. All of this is done while keeping the sandstone hill at or near your left shoulder. When you arrive at the top of the last crack, you have reached "the tank level." The remaining portion of the climb to Red Cap Peak is an out and back endeavor. So, up we went some more. We climbed the white sandstone up to our left, found our way over to the last slope and crack then stood for the first time on the red sandstone layer.

This is where the climbing gets a little exposed to open air. Keeping a clear head allows hikers to negotiate the next difficult scrambles without losing their grip. When we all reached the peak, we took a break enjoying the gorgeous views of the clear day. 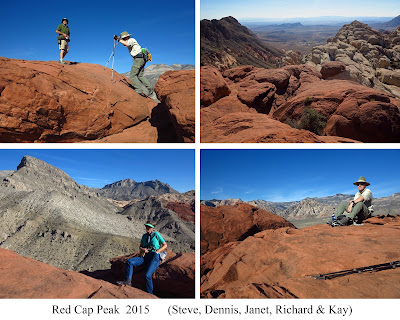 Sitting on the northern end of the Calico Hills, we could see almost all of the sandstone of Red Rock Canyon plus much of the limestone including Turtlehead Peak which was neighboring us.

Eventually, we had to start our descent. We had climbed the peak on the east side and, now, we descended on the west side. There is a small slide as seen in the photo to the left. Then, we continued down to the white rock layer. Working slowly, we descended down to the tank level where our out and back began. While four hikers toured the tanks, one hiker laid back for a relaxing break.  The tank tour involved circling an "island" of rock. There are five major tanks in this area although the largest seldom retains water. They include the Wall Tank, the Sundial Tank, the Large Tank, the Sunken Tank, and the Top Tank.

With the exception of the Large Tank, all the tanks were filled over half full of water.

First, we dropped down to the Wall Tank as seen in the photo below. Next, we hiked up to the Sundial Tank. (Yes, it used to have a sundial made of rocks in the middle of it.)


We scrambled up the steep wall when we got around to the end of the tank then took a couple of photos of the Turtlehead reflection. We saw many very small tadpoles in the Wall Tank and one tadpole shrimp in the Sundial Tank. We climbed up to the top of the rock island and gingerly made our way, jumping over a deep crevice, around the Sunken Tank and over to the Top Tank where the first photo in this entry was taken.

This area is a favorite place of the writer's to take photos and sit and "reflect."


At the end of the tank tour, we collected the fifth hiker and proceeded to climb over the rocks on the west side of the tank level. Sometimes hikers slide down into the Large Tank to begin their descent. Today, we avoided the holes in the britches, so to speak. This began a very steep descent down to Mass Production Wall, a popular rock climbing wall. We dropped past the loose boulders, baby stepped the sandstone slab then wound our way down to the top of the wash next to the wall on the left.

Our descent next to Mass Production Wall was slow. It is a somewhat difficult down climb due to the unevenness of the small boulders. 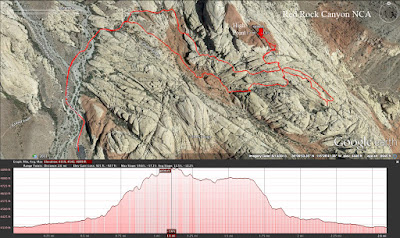 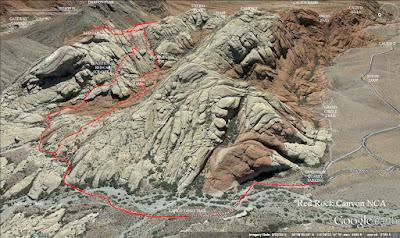 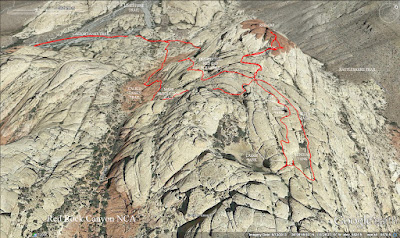