The Rocky Gorge Loop is another new trail for the Around the Bend Friends. It came to our attention when the new visitor center opened and handed out maps with several trails on it that we had not hiked before. We have explored these trails over the summer and today was the day for Rocky Gorge. Five hikers drove up Lee Canyon Road in the Spring Mountains NRA Forest Service Land a little over ten miles. We turned right onto the Blue Tree Road which leads down into a small quarry of sorts. The trailhead is found in the bushes on the right side at the bottom of the hill.

The trail immediately goes into a small wash that has been trenched by recent rains. Exposed roots block the wash now and then.


At around 3/4 of a mile, we reached the wide new trail that switchbacks up the hill. This gave us wide open views of the surrounding landscape. The wispy clouds in the sky were simply gorgeous this morning! We could see all of Mummy Mountain one way and a large portion of the Sheep Mountains in the other direction. After we reached the top of this hill, the trail began a descent down into a large wash. We lost the trail, today, as we lost elevation but we figured it all out in the end. At any rate, we found the wash and began our hike up the Rocky Gorge wash.

The gravelly wash began gently and soon we passed by the official trail (the trail we lost) coming in from the left. It wasn't too long before we started to feel the rock walls close in on us and we began a bit of a rocky climb. We had found Rocky Gorge!

This small canyon wash was very nice and unexpected in this part of the desert. The rock underfoot was smooth from seasonal water flow. And, there was even a nice pinnacle jutting out from the left wall.


This section of today's hike made it special but it was all over too quickly and we found ourselves back in a plain sandy wash again. There was a trail that took us out and in the wash as was necessary. But, the wash eventually became a bit tedious until Kay excitedly yelled, "Elk!" Unfortunately, she was the only one who saw the large elk complete with huge antlers, quickly running across our twelve o'clock. It was running so fast that it probably didn't stop before it was totally out of viewing distance.

Next, we came to a couple of large cairns near two bushes with blue marking ribbons tied to their branches. We turned onto this trail but it appeared that a trail that continued up the wash was stronger than a weak trail that led up the hill to the right.


So, thinking this was the correct way to go, we continued up the wash. In retrospect, this was an accidental good mistake. We were already piling up the miles! Nevertheless, when we came to another faint trail that led up to the right, we decided to follow it and ended up bushwhacking on the parallel ridge. This took us in a southerly direction instead of the official route's westerly direction. When we arrived at the No Mads Trail dirt road, we knew a mistake had been made so we decided to turn left, go down the steep hill and connect with the Blue Trail, perhaps cutting our expected hike almost in half.  The Blue Trail took us back to the trailhead even though, once again, we lost our way. Thank goodness for GPS! 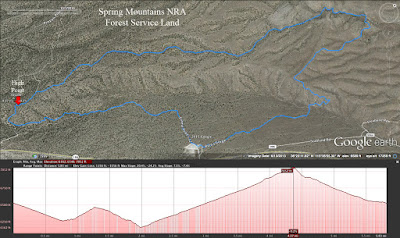 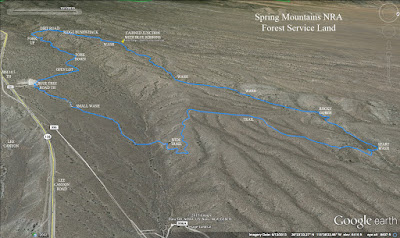 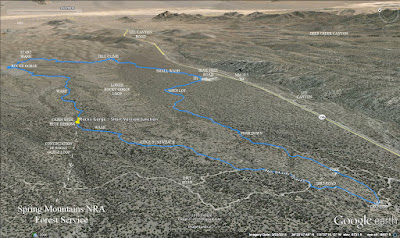