Who knew that a woodsy mountain hike in a light intermittent rain could be so refreshing, comforting and pleasant? Seven club hikers, that's who! The rain settled in to the surrounding mountains and our route, today, was just on the outskirts of those clouds. Preparing for a point to point hike, we left one car at the mile marker 10.5 trailhead on Lee Canyon Road in the Spring Mountains NRA then rode in two other cars to the Orange Trailhead on Deer Creek Road approximately two miles from the Lee Canyon Road junction. (Or, 5.7 miles from the trailhead where we left the other car.)

Since this trailhead serves a loop route, we chose to take the trail that headed down into the wash on the left. The trail is fairly easy to follow if you keep your eyes open for twists and turns that are sometimes marked by cairns, flags or ribbons.


Nearing two miles down, the trail takes a decisive turn up and over the neighboring ridge. Follow the trail and it eventually drops into a large wash that connects with the first wash at an angle further down. When the crossover begins, the flags and ribbons cease to mark the trail. Don't be discouraged. The trail is now tried and true even though it can be easily lost if you aren't paying attention. After we crossed another small ridge to drop back into the first wash, a few ribbons began to reappear and distant views of the surrounding landscape are caught from the small ridges that the route starts to climb.


We stopped in this area for our break. We had already donned and removed the rain jackets once but, at the end of our break, the light rain began again. Only once was a very distant thunder roll heard. Feeling safe and comfortable, we continued straight past the Orange Trail junction that took a sharp turn to the right. Here is where our route changed from the "Deer Creek / Catch Pen Loop" trail to the "Middle Deer Creek Canyon" trail. After scaring up three or four jackrabbits, we reached Jackrabbit Junction. This is where the trail crosses a small pass next to a low rounded hill that we could see for at least a half mile before.

This trail crosses the lower elevations reaching into the Upper Sonoran terrain. With the lower growing foliage, the views of the desert playas below opened up. We could still see the lake in the playa we saw four days ago. We have learned that the lake lies in Three Lakes Valley.


There are two significant climbs nearing the end of the hike. We simply paid our dues after the mostly downhill route. After taking a stop to try to name a few of the mountains seen around us, we crossed over one more ridge and dropped into Lee Canyon. The trail finishes out by crossing the Lee Canyon wash and climbing a long steep hill up to the trailhead where we left our car. While hikers were waiting for the return of the cars from the Orange Trailhead, they picked up trash around the trailhead. Absolutely great morning! 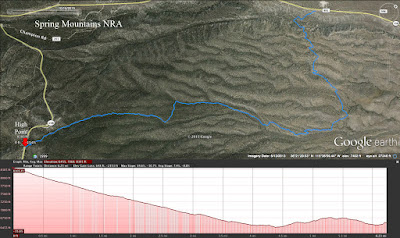 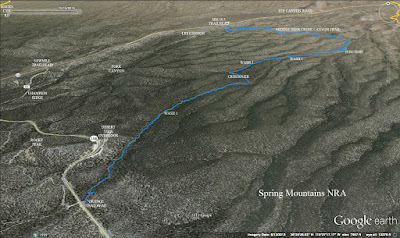 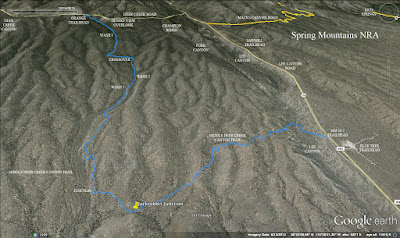