To avoid a 13 mile trip around the scenic loop of Red Rock Canyon NCA, the 11 mile Escarpment Base Trail turns into the 13 mile Escarpment Base Trail Extended. Eight hikers parked in the exit parking lot of the scenic loop on Highway 159 and watched the sun rise on the escarpment. After preparing for our long haul, we started out by taking one of the approach trails that runs between the exit parking lot and the Oak Creek Trailhead parking lot.  It took us almost directly toward the escarpment at Rainbow Peak. When we reached the trailhead, we took a short break for the restroom.

The next trail on the route was the Arnight Trail that leaves the parking lot from the lower corner.

The Arnight Trail becomes increasingly rocky underfoot. This is fine on the way out but during the twelfth mile on the way back, the rocks are a bit annoying!


We passed where the Knoll Trail turns off to the left and then, later, where the Juniper Canyon Trail turns off. The sun warmed our backs until it rose a little higher in the sky. The air was clear. Chollas flourished along the whole route and we were constantly encouraged to avoid their hooking spines. As we turned the corner to begin the drop down into Pine Creek Canyon, the sound of water in Pine Creek rose up loudly from below.

Pine Creek was full but not too full. We crossed the water on the trail without getting our feet wet.

We passed the Wilson Homestead ruins without stopping on the way out. But, on the return, we took a small break there.


After hiking down the Pine Creek Trail a little way, we turned left onto Dale's Trail which is arguably the prettiest part of today's route. Although Dale's Trail has several deep washes to cross, it makes up the extra effort with splashes of color throughout. The sandstone changes from white to red to white a few times and the cacti and junipers are plentiful. The trail dirt was red and there were strong views of both the escarpment and the Calico Hills across the Red Rock alluvial fan.

At one point, we could see one of the new bridges being constructed on the scenic loop.

After we passed The Bench, it wasn't long before we junctioned with Ice Box Canyon Trail. We crossed this trail and continued on the SMYC Trail.


The SMYC Trail also has its charm. The escarpment above is very interestingly shaped and there have been rumors of a mountain lion den there in the past. No lions today. We had rounded a point in the escarpment and could see the Willow Springs area in the distance. A few more washes to dip down into and climb back out and we would be at the half way point. Prickly pear seems to be very happy growing in this part of Red Rock.

As we hiked the trail, a helicopter flew by. Judging by sound, we think it may have picked up someone in the Willow Springs area.

The SMYC Trail finishes off in the Red Rock Wash as it approaches the Lost Creek Trailhead. We took our snack break here.


The return trip afforded different views of the escarpment. We hiked along talking the whole way. We used the same route as we did on the way out. The trail is easy to follow for the most part, however, there are a few social trails (especially on the Arnight Trail) that fork off from the main drag. Probably the best technique to find your way would be to look ahead and see which trail goes the way you want to go! In the desert, this usually works pretty well.

As we tired, the line of hikers separated only slightly. We were evenly matched most of the way as Chris led a pace of around 2 miles per hour.

We did not see any wildlife all day ... except for one bunny.


When we neared Skull Rock on the return, Mike collected two gargantuan agave spears that will make nice hiking sticks. Unfortunately for Mike, we still had about 3.5 miles to go. The spears were so long that he had difficulty maneuvering at times! Nevertheless, he happily hiked into the parking lot at the end of the hike still carrying his load. And, we also hiked into the parking lot happily as the 13 miler ended as a success. 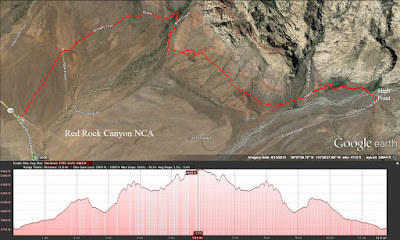 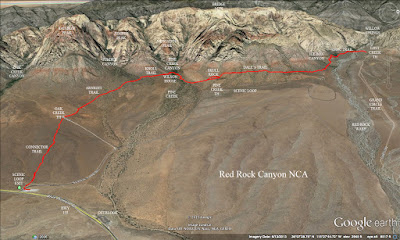 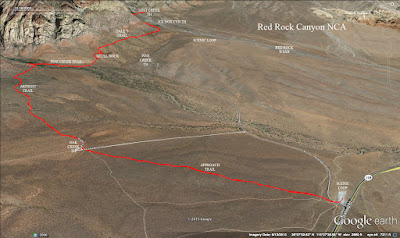 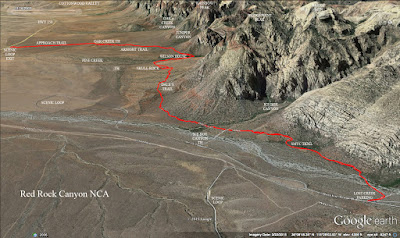