Calico Hills Loop is a favorite 8 mile adventure through colorful sandstone of Red Rock Canyon NCA. Seven hikers started out from the Red Springs Park in Calico Basin by forgoing the surface trails over to Kraft Mountain and walking the pavement up to the dirt parking lot at the end of Sandstone Drive. Here, we entered the dirt trails that ran along the base of the south side of Kraft Mountain. We climbed through washes and winded around large boulders until we reached the bottom of a steep ascent affectionately named by the locals as 5 Stop Hill.

Today, we took one break stop half way up the hill and topped off at the saddle. It was a beautiful day and already a bit warm. Perhaps this would be the last warm day of the year.


After a small rest at the saddle, we continued on the trail down the other side with Turtlehead Peak watching over us and Gateway Canyon flowing down to our right. Our trail descent ended in Gateway Canyon above the calico walls in the limestone gravel. Turning left, we slogged up the deep gravel between trees and bushes that had not quite changed color for the autumn. We took a small rest in some cool shade before reaching the dry fall that seems to continue to grow in height. It wasn't wet today, so it was easily climbed on the right side.

Changes in the gravel levels due to regular flooding make this area a constant new experience!


Above the dry falls, the Rattlesnake Trail turns off to the left in a small wash. We turned and began a pleasant scramble up. Some hikers preferred the trail on the right side. The canyon wash was in the shade making this a very nicely cool portion of our morning. We climbed up and up until we passed the top of Ash Canyon and reached the northern base of Red Cap. Without stopping, we continued along the trail as the sandstone views began to open up underneath a waning gibbous moon.

We turned onto the upper sandstone shelf and scrambled down to descend the sandstone slab on the left side of Rattlesnake Trail. A short trip up to the nearby arch resulted in the first photo of this entry.

Next, we tried a descent through the small beautiful slot. Unfortunately, there is still one pool of water that is not easily bypassed without some risk of getting wet.


We climbed back up and circled around to bypass the slot then continued around the corner to pass through the red portal of sandstone. Here, we met up with Neil Sobelson and a couple of his clients on a great adventure of their own. After a few laughs, we continued out to the Calico Tanks Trail junction and took it to the parking lot at Sandstone Quarry off of the Red Rock Canyon NCA scenic loop drive. This place was very busy today!

Our official snack break was taken here near the restrooms where we were encouraged to eat "lizards with lots of sauce!" One of David's favorite meals out in the desert! (... I don't think so.)

After the break and before continuing our loop, we hiked over to the deep slot near the parking lot and climbed up in there. Once inside, this slot provides a large space to enjoy cool shade.


We didn't stay long and climbed out to connect with the Grand Circle Trail going down along the fault canyon of the Calico Hills. Our pace sped up along the class 1 and 2 trail. One of the points of interest was the petroglyph area where we noted that, once again, someone has deemed it necessary to deface the main petroglyph rock. Not sure why this is so necessary. Anyway, we continued on the trail until we were approaching the area below the Calico II turnout. The trail dips down very close to the wash here.

We dropped down into the wash to hike past the area. This is a much easier way to hike through since the trails above are confusing and steeply climb and drop.


We stayed in the wash (or next to it) until we were half way down to the Calico I turnout area then we transferred to the Grand Circle Trail again. The trail took us up to the Calico I overlook then down the other side on a slippery rocky slope. We did not connect with the wash again until after the large dry fall area where there was a large pool waiting for anyone who dared to think they could slide down from the slot. We escaped the wash again and came down at the large bush junction ... another steep slip and slide hill.

There were no more pools to deal with but it was evident that the wash had recently been flooded changing the terrain a little as we descended.


We took the trail out to the left and passed through a second petroglyph area. As we hiked the lower trail underneath the balanced rock, climbers were practicing their skills on the precariously situated gargantuan boulder. Not sure that this rock needs to be pulled on! Anyway, we made it up to the top of the hill above Red Springs Park and dropped down to the boardwalk. A beautiful day! 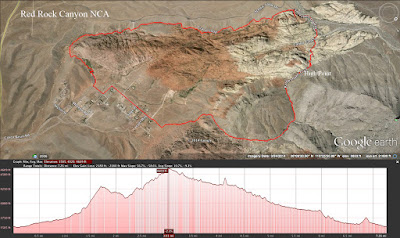 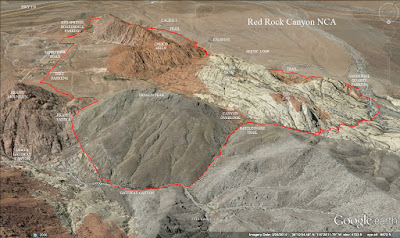 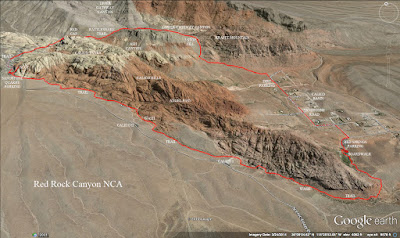