Sometimes conditions seem to all come together in our favor. Recent rains have filled the tinajas of the Calico Hills to their fullest in three years. The weather was optimal for a challenging scramble; sun, cool, and little wind. And, finally, one month prior, the Tanks Discovery Scramble in the Red Rock Canyon NCA was scheduled for today. Fifteen hikers started out from the Sandstone Quarry trailhead and followed the Grand Circle Trail to the west until we had climbed the trail's first hill. Here, the trail meets a large sandstone hill. This was the beginning of our first scramble.

For all except two of today's hikers, this was brand new territory. Very exciting!


After climbing up some of the steep sandstone, we found a large tank full of water.  The Red Rock escarpment could be seen from our location. We oohed and ahhed then proceeded to find a squeeze through and climbed a little more. There was another deep tank near the top of the hill then we peaked out on a nearby high point and found one more tank. This last tank had at least one tadpole shrimp inhabitant. The new surroundings were beautiful.

We found our way down the steep hill enjoying the scrambling.


Back down on the Grand Circle Trail, we returned to the Limestone Wash below and hiked up the wash to the right turn that leads to the large sandstone arch. Once there, we began our second climb of the day by starting up the ramp beyond the arch. This was a very challenging climb for many in the group but we all made it up then turned to the right to start a challenging descent. Again, we waited for the last hikers to arrive.

Although the group of hikers were of different skill levels, patience and coolness prevailed.


We scrambled our way around and up and over until we were climbing a beehived sandstone slab up to the second hill summit. Up there, along with a phenomenal view, there were many small tanks and two or three medium size tanks. For those who enjoy interesting subjects for photography, the tanks always provide, either by reflection or landscape additions. When Las Vegas gets as much rain as we have had recently, there seems to be tinajas of all sizes all over the sandstone hills.

We took a few minutes to walk around the summit and see what we could see.


We always looked for tadpole shrimp but found very few. These critters dry up when there is no water but presumably their eggs hatch when the water returns. (Something to read about!) Next, the descent from the second hill summit is steep but totally doable. We took our time and zigzagged down all the way to the Calico Tanks Trail below us then waited for the end of the line to arrive.

We crossed the trail and hiked up the red sandstone to connect with the Calico Tanks Trail at a later point.


We used the official trail as we hiked through the red sandstone layer. This layer finishes at the top of the long staircase as seen in the photo to the right. Next, we climbed up the trail through some of the white sandstone until we found the small trail that sneaks off to the right up to the sandstone above. From here, we crossed the plateau and began another steep climb up to the third and final hill. As hikers made it to the top, we all gathered again at a large tank that lacks charisma. We called it the Ugly Tank.

Crossing the next level, we passed the Asterisk Tank.


We climbed up a ways then squeezed through a crack to go to a much prettier tank we called the Pretty Tank. We returned to the main drag an easier way then climbed up to the next level. Here, we arrived at the Exclamation Point Tank. This one usually has water and it was full. Continuing, we climbed up to a lip of rock and found the Hidden Tank. Now, it was time for the Brush Descent. Down through the brush and boulders, there is a worn path by now, that balances on a tree at the end. Then we climbed a little more.

We passed by the Sunken Tank today. It was nearing time for a break and a snack.


So we followed the trail over to the Long Pool area. Our first order of business was to figure out how to get by the area that we usually hike through but was now full of deep water. This took a minute but then we were able to get to the other end of the Long Pool where the photo above was taken. The Long Pool was absolutely full! Next, we hiked out to the ridge that leads to the Lower Calico II Overlook. On our way, we got this photo of the Las Vegas skyline seen to the right.

The southern portion of the Calico Hills could be seen from the end of the overlook. This is where we finally got to sit and enjoy a snack and a view.


But, the hard stuff wasn't done yet. Afterwards, we found the wash below the big cave and climbed some more ending on top of a wide sandstone ridge that offered cliffs on both sides. There was a decent size tank up here that had a background of the skyline. We called this City Tank. All downhill from here, we dropped into the descent wash for a steep fun return to the Calico Tanks Trail. Turning to our left, we returned to our cars on this official trail. Scrambling seldom gets more fun than this! 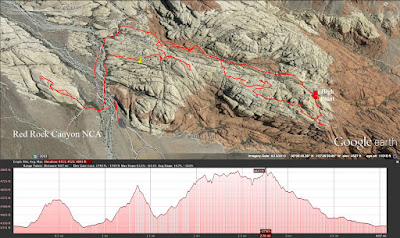 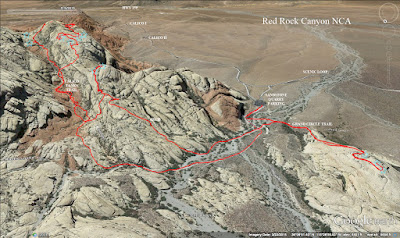 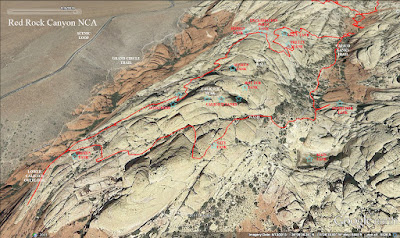