Fletcher Peak is a twin peak that rises to an elevation of 10,255 feet. Its twin rises only to 10,245 feet and this is the point where we have traditionally stopped. This small wooded and rocky peak is said to be the easiest peak to reach in the Spring Mountains NRA. It is located in the vicinity of Mummy's Toe and Raintree. Fletcher Canyon is found just below these twin peaks. The lesser of the peaks has a wide fantastic view over Kyle Canyon from Harris Peak to Charleston Peak on one end of its rocky outcrop. From the other end of the limestone, the view ranges from Mummy's Nose, through the distant desert, over to Angel Peak and on toward La Madre Peak. Parts of Deer Creek Road can also be seen below.

It was a hot day in the alluvial fan called Las Vegas. 119 degrees was witnessed by my husband as he drove across the valley near the Strip around 4pm. (Road heat, maybe.)


We converged on the North Loop Trailhead parking lot which was relatively empty at the early hour of 8am. About half of the group jumped out in front early on. We were to meet up at the North Loop Meadow. We climbed steadily up the trail at our personal comfortable pace without stopping per Brian D.'s advice. If you find the right pace, this works very well. Here, it is important to be able to find the pace that works best for you ... personally. This is often difficult to do in a group hike setting but, today, it was encouraged.

As we climbed higher, the views around us became more and more beautiful. There were a few flowers along the trail. Mostly bushy phlox, lupine, paintbrush and AZ firecracker.


This is a very photogenic location so we took a few pics. Afterwards, we all headed up the switchbacks. Our next gathering point would be the High Point Corner so we again naturally separated according to our pace. There are twelve switchbacks as you climb the hill and approach the 10,025 foot elevation at this locale's high point. A few hikers were still acclimating to higher elevations and felt that "drag" kick in somewhere along these switchbacks. But, perseverance is the name of the game sometimes and we all made it up to the gathering point where we got our first look at the target peak across Hummingbird Gulch. Of the twin peaks, our 10 foot lower peak is seen on the right in the second photo from the top of this entry. It is the one with the limestone "scar" down the side.

Knowing that the front hikers are very familiar with the route, our third and final gathering point would be the summit.

Those that were not familiar with the route were welcome to stick around me as I showed them the left turn junction between the two large logs.


Sorry to say, there is no signage here to say "Fletcher Peak this way!" And, the trail is not obvious since it takes a U-turn and steps up over a log where it disappears to those on the North Loop Trail. Over the years, we have come across a handful of hikers looking for this junction ... or, not even aware that the junction exists. This results in "wandering hikers" that don't really know their way around. (A recipe for a lost hiker.) Signage is not really a strong point here in the wildernesses surrounding Las Vegas. This encourages the development of a large number of hiking groups so that the trails and routes are handed down from hiker to hiker. (A blog or two helps, too!)

If you want mileage stats (and keep in mind that all GPS instruments are different): the junction is ~0.35 mile from the High Point Corner and ~0.15 mile from Raintree.

We ushered everyone through the logs and up the increasingly large step onto the Fletcher Peak Trail. As you make your way to the other side of the hill, the views open up.


Behind you is Mummy's Toe. Very impressive. The trail takes you steeply down to the Fletcher Saddle. Hummingbird Gulch comes up on the left side to junction with the Fletcher Peak Trail at this saddle. The Fletcher Peak Trail continues forward as it leads along the right side of the Fletcher Ridge. The views don't quit! Kyle Canyon mountains are seen to the right and the old bristlecone trees plus limestone make the views forward and to the left just as magnificent. Eventually, the limestone scar can be seen on the left from the trail.

Finally, we made it up to the top! Fletcher Peak is like an old friend that we like to visit a few times every summer. There are at least three good routes to get to that log junction.

We signed into the book and noticed that the elevation posted on the book is different than what is posted on Bird and Hike.com. GPS's are often different.


We enjoyed the cool breeze on the peak then proceeded to descend at a careful but quicker pace. We stopped at the North Loop/Fletcher Peak Trails junction. Next, we stopped at the North Loop Meadow. Then, it was on down to the Trailhead. Most of the descent was done as a group. And, what a great group it is! In the past few months, we have added such great hikers as Charlie M., Ralph T., Mark H. and, just today, Randy G. Welcome to the party ... uh ... workout being held every Thursday on the trails! "Parties" are also being held on every other day as well!


Making your way in the world today
Takes everything you've got
Taking a break from all your worries
Sure would help a lot
Wouldn't you like to get away? 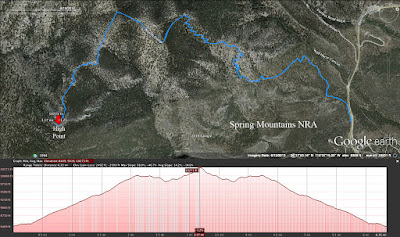 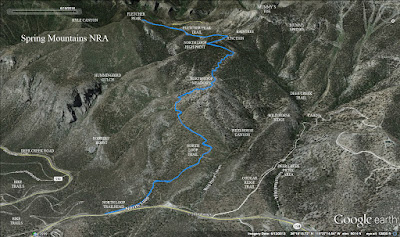 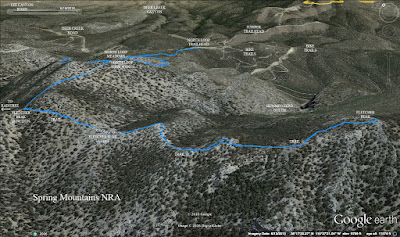 Posted by Las Vegas Cockapoo at 8:59 AM