The South Loop of Charleston Peak is slowly but surely returning to life after the wildfire of 2013. The blue lupines and bushy phlox are blooming along with cliff bush and a variety of penstemons. Unfortunately, the burnt slope where deer are often seen above the avalanche chute is absolutely covered with a grass called red brome. This grass will die and dry out quickly leaving a seedy foot-high brush that is dangerous fodder for more fires. We hope that the forest service has a plan for this invasive grass. Anyway, right now, the grass is kind of pretty!

There were two Around the Bend Friends hiking groups parking at the trailhead near the top of Kyle Canyon Road. One group consisted of around nine hikers training for a trip to the United Kingdom. They will hike the highest peak in each of England, Wales and Scotland in three days. (Yes, it's a thing.)

This group, led by Brian D., went to Griffith Peak today. The second group of nine hikers were going only to the South Loop's 3rd Overlook.


Before the trailhead was changed from the old Cathedral Rock trailhead to the fancy new trailhead, the 3rd Overlook measured just under 7 miles. Now, lo and behold, it is only 6 miles! So, we started up the trail with intentions of taking Brian's advice to the other group and try to go slow enough so that we didn't have to stop. Hmmm. Right. Anyway, we did go slower than usual stopping only for photos in the first mile. It was a comfortable pace that we maintained for the duration of the climb, however, there were various reasons that we had to stop here and there.

The one mile stop is Rainbow Junction. Next, we struggled up the steps. After a short breather at the big wash crossing, we started up the first set of switchbacks. Here is where we had to step aside about four times for others to pass.

We took our second water break at the 1st Overlook. Then, continuing up the trail, we were able to pass the wilderness sign before we took another breather.


The South Loop is a beautiful trail especially when you get up into the trees. There are views everywhere and the surrounding ponderosas are calming. As we headed up one of the switchbacks, we passed Lettie who was on her way back from the 3rd Overlook. She had started up early. A cool breeze kept us comfortable and we only encountered a few of the strong gusts that were predicted on this red flag warning day. The nine of us continued plodding along keeping the same slow pace. Finally, we arrived at the 2nd Overlook where a dad and 3 kids were setting up hammocks. Fun!

We quickly took in the view there then proceeded up one more switchback to the 3rd Overlook.

This overlook is much more photogenic than the 2nd. And, there is a long sitting log there where we took our break.


The breeze was pretty quiet while we were there so we enjoyed our time. Photos were taken. Three mountain peaks that could be clearly seen from this standpoint were, of course, Charleston Peak, then Harris Peak in the other direction and Mummy's Toe across Kyle Canyon. Lee Peak is seen as the highest "bump" on the North Loop ridge just above David M.'s head in the photo below. (You can see Charlie above Charlie's head!) Ed was reading his newspaper on the far end of the overlook and Ralph sat quietly near the trail. That blue penstemon in a photo above was found in the scree of the overlook.

We had caught up with two of the hikers of the first group who had to attend to a shoe issue at the 3rd Overlook. They continued up when we got there. Later, Tony caught up with us on the way down.

Tony had started early and gone all the way up to Griffith Peak. He reported that as he descended, he passed the first two hikers of the other group making a strong ascent finish. They were Brian D. and Stephen N. (No surprises there!)


So, if you count everyone on the mountain this morning, we had around twenty hikers from AtBF. It's a great group of people! Anyway, we did the no frills descent with few stops at a steady albeit faster pace. (We passed Roger M. and friend on their way up!) Unusually so, we didn't see any of the deer that live in this area. However, we did see a trail maintenance boss guy who was looking over the trail. We questioned him about that big wash crossing and got two different answers. The gist is that they are thinking about how and what, if anything, they can do. (You know the water will eventually undo almost any simple patch job.) ... But, at least they are thinking. 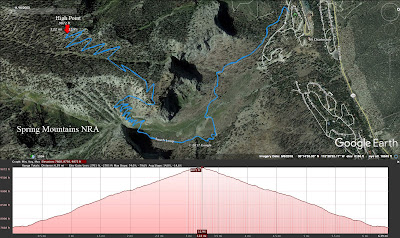 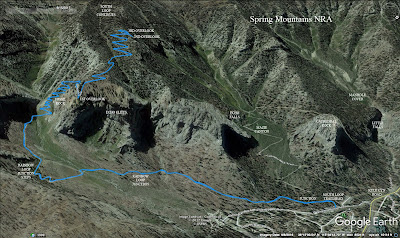 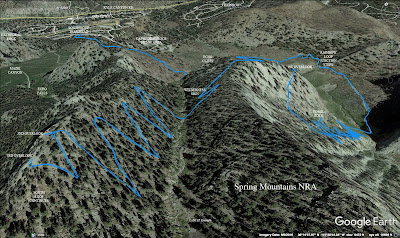 Posted by Las Vegas Cockapoo at 9:18 AM