Some people estimate that Raintree, a large bristlecone pine found on a saddle at the base of the Mummy's Toe cliff, is around two to three thousand years old. (Close enough for me.) Hopefully, the tree in the Spring Mountains NRA will stand in its healthy state for another few thousand years. However, it is important to remind hikers every year that the tree will suffer if hundreds of hikers continue to sit on its roots and add to the erosion of the dirt around them. It is difficult, isn't it, to not touch the grand old tree and to be a part of such ancient history. Just asking everyone to have respect for it.

There were fifteen club members hiking the trails this morning. One was a late arrival and another was up there early. Good to see you Danuta and welcome back Rita!

The group that had gathered was very strong. Therefore, the reins were released for the first two miles while we all climbed Trail Canyon at our own speed.


The first two hikers to reach the saddle made it in 40 minutes. Yep. Crazy, huh? Anyway, the last hiker to reach the saddle (moi) made it in just over an hour. During our climb, some of us saw two of Kyle Canyon's deer population. The weather was fantastic; starting out very cool with a breeze. No clouds marred the blue sky and we clearly saw the switchbacks on Charleston Peak's final prominence. Looks like the snow has relinquished entry on the last one making the North Loop a viable route for those hikers who have an aversion to hiking in snow on cliffs. (Again, moi.)

We huffed and puffed up the canyon trail. I knew that this would not be the morning that I broke my record! But, the effort is always a good thing.

We saw Rita at the saddle. She had come early and had already been to Raintree and back. Later, Danuta showed up at the end of the line having caught up ... another strong one.


After a rest, we went straight over the saddle onto the North Loop Trail in the direction of its trailhead about 4.5 miles away. Raintree is only 1.5 miles from the Trail Canyon junction. Now staying together as a group, we enjoyed the relatively easy respite of the first half mile. During this time, the views were tremendous! Below us fell Fletcher Canyon. Across the way ahead was Fletcher Peak. Looking back toward the saddle we had just left was Cockscomb Ridge. Beyond that was a bald Griffith Peak. And, finally, when we got far enough along around the ridge, we saw Charleston Peak as we looked back. We stopped a few times to take it all in.

This part of the North Loop Trail begins a formidable climb up towards the saddle on which Raintree rests. At first, the slope is average but, by the end of the climb, it becomes steeper.

As we headed into the bristlecones, the steepness and beauty combined. These are old beautiful trees up here!


We stopped for our break at Raintree then headed back down. It has been a long time since we have been able to enjoy the Raintree area without several other hikers from other groups there. However, we did pass a few other hikers as we descended. The pace was only interrupted by a few photo stops. We glided down the mountain with a good steady pace erasing all that elevation that we worked so hard to gain only a couple of hours before. We want to commend the trail maintenance crew for the improvements they have made on Trail Canyon. Thanks to all and what a great morning to be alive! 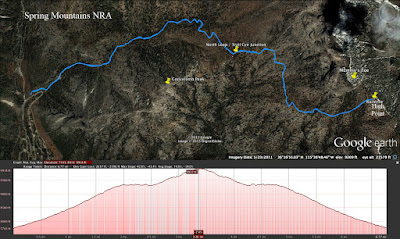 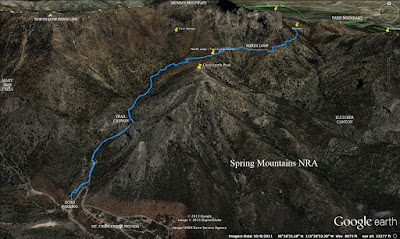