Tucked between the Hamblin Bay Fault and the Bitter Spring Valley Fault south of the Muddy Mountains near Lake Mead NRA, are areas of striking color. Red, cream, and (as we saw today) salmon colored Aztec sandstone protrude out from the limestone shell. Much of this limestone shell was deposited by the movement of Frenchman Mountain as it passed through the valley 13 million years ago. As it moved through geologic upheaval, the limestone debris covered a very colorful area of sandstone. (Yes, a lot more complicated than that!) Large parts of the sandstone show in this area and are referred to as the North and South Bowls of Fire. But there are many smaller areas that appear as well.

One of these small areas has been dubbed Colorful Canyon. It is located northeast of the North Bowl of Fire and the loop hike for this area uses the same trailhead, Northshore Road mile marker 20.5.

This is one of the few trailheads on Northshore Road that has a restroom facility offered by the park service. Today, nine club hikers converged on this parking lot to start up the Northshore Summit Trail.


The trail climbs up to the top of a nearby ridge and you are rewarded with colorful 360 degree views of the surrounding landscape. This is a short climb that is well worth the stop if you are just sight seeing along the Northshore Road. After photos of the initial overlook, we followed the trail along the ridge then dropped down to the other side. The trail places you right into a small wash. Follow the wash until it junctions with a bigger wash where you turn left. This wash circles around a black hill to your right, then you turn right onto Callville Road. We saw by tracks in the dirt that a car has recently travelled the road. This can be done by a high clearance vehicle.

Nearing the end of the road as indicated by a sudden slot in the wash, we passed by the track fossils of birds and camels. There is one other track unidentified by us. We were unable to locate the bigger rock with camel tracks. Perhaps we just missed it. It tends to hide!

After searching for that fossil rock for a few minutes, we moved on to the slot at the end of the dirt road. Recent rains have sent a lot of sand into the slot making the climb out at the end much easier.


Right after the slot, there is a major fork in the wash. We took the right fork. Follow the left fork to Seaworld! This main wash continues up for a few minutes then, at a small ridge on the right side with a lot of red barrel cacti, there is a game trail that leads up to the desert floor on the right. As soon as you get up to the top, you can look into the distance and see your target, Colorful Canyon. Also, in the slightly nearer distance, you see a hill. Our route stayed to the right of this hill and to the leftish of Colorful Canyon. This enabled us to cross the arroyos in their upper and shallower spots. One of the arroyos has sandstone showing and we used a sandstone wash to drop into it.

The climb out of this sandstone-filled wash was the steepest. When we reached the other side of that hill on the left, we found a game trail that led around to the high embankment above Colorful Canyon.

There are a couple of ways to get down into the canyon. They are trailing ridges that steeply drop down the side. We used the ridge on the very left end of the canyon today. It worked great since the dirt was soft from recent rains.


There are a few flowers out now but, it is likely that this coming warm week will bring out a lot more. The beaver tail cacti (a favorite) are budding nicely. The brittlebushes are blooming on the side of the road. There are a few desert marigolds and dandelions about. We saw a couple of jack rabbits and a shy horned toad. Many lizards of course! And, we brought out the tortoise shell seen in the photo to the left for everyone to take a look at. It has been hidden for many years and is starting to decay but it has the neck bones still in place and the protrusions in the front. Both sexes have an extension on the front of their lower shell called a gular horn. The horn is longer on the males and they will use them to upturn rival males.

We hiked down the ridge into Colorful Canyon and noted that if we had gone around that hill to the left adding a little bit of distance, we could have entered Colorful Canyon from the wash.

Now, in the canyon, seven of the nine hikers decided to follow Chuck up to the rimrock above to take their break. Two hikers stayed below in the shade of one of the salmon color formations.


Down below, I wandered around looking for things to photograph. I could see the hikers on the rimrock above dangling their feet over the large limestone layer that sits atop the sandstone. When the break was over, the hikers on top continued their traverse of the rimrock until they reached a canyon wash that led down to the wash below. We met them as they hiked down. Continuing down the wash, we broke through a thick layer of conglomerate. Next, the canyon turned into walls of shiny sparkling gypsum. The gypsum was clear as black glass on the walls and floor of the wash. From there, the canyon wash widened and transformed into a plain wash.

Finding the next junction of the route was our priority here. At the second tributary junction, we crossed over to a short exit wash and climbed out.

Chuck took over navigation duties and we took off! Literally! Desert hiking is Chuck's specialty and he's very good at it!


Our target was a second cliffy hill on the distant right at twelve o'clock. On the way, we crossed the dirt road that marks the boundary of the Lake Mead NRA. The photo below shows the view to the right as we crossed the road. Nearing that cliffy hill, we had to cross a deepish wash then the next wash was really deep! The second wash was our target but we had to go up wash past a very large dry fall before we used a small trail to drop in. This wash has several more fun scrambles as you climb up. Here, there is a choice. Either you can continue up the shallowing wash and come to the Summit Trail to turn left. Or, like today, you can turn left after the last scramble and climb up to Sheep Ridge. Up, we went!

It was a hard climb at the end of the hike but it was very nice to get to the top of the ridge where the bighorns hang out! On the ridge, we turned right and followed the ridge to a fortress-like high point.

Along the ridge, we saw several sheep beds and droppings. It was an excellent place to take an overview of Bitter Springs Valley. Bighorns get the best places to live!


Yep! We were a little tired by now! Enough up. So, here, we connected with a trail that dropped slowly down to the left. Horses had recently tramped this part of the trail. The trail dropped down into an arroyo that we followed down almost to the trailhead elevation. When we climbed out to the right, we were almost back to the cars. Fantastic day! Fantastic hike! Thanks for the leadership, Chuck! You have so much to offer! Lake Mead NRA is your oyster! 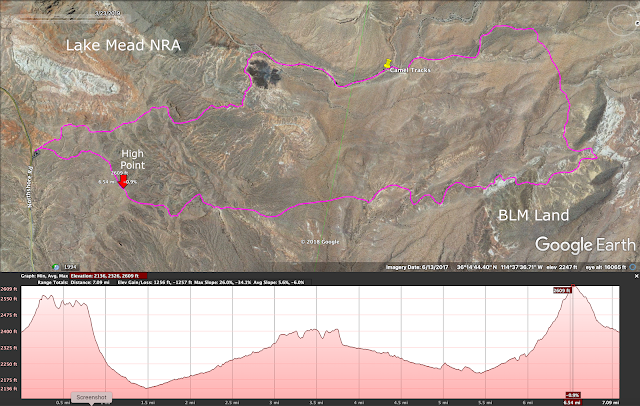 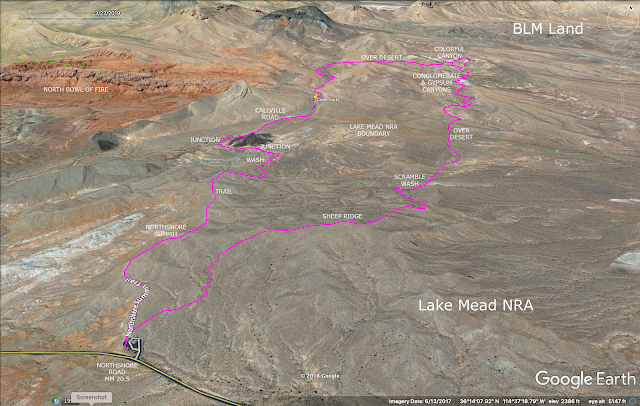 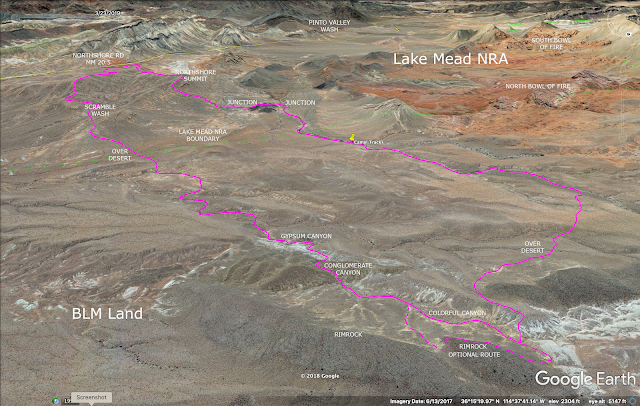 Kay--Enjoyed your "Colorful" writeup and pics. It amazes me how quickly you can gin out these well written and excellently photographed products. By the way, thanks for your kind words.

Also, I'd like to join your exploratory Northshore Peak hike on Thursday. Can I put in a plug for a moderate ascending pace (ha)?