As fifteen hikers made their way from the Cowboy Trails TH up to the entrance of Cave Canyon, twelve horses were being relocated by two wranglers from the lower corral to the upper corral in preparation for a large 34 horse ride later in the morning. We dipped down behind the upper corral and began our climb into the left fork canyon called Cave Canyon for its caves that are big enough to go in and take a look. The initial climb up the trail past the large boulder field wakes us up every time. When everyone reached the small graffiti laden cave at the top, we crossed the wash and climbed up to the first obstacle.

In order to get into the interesting and beautiful Cave Canyon, you have to climb this one 3rd class dry fall. It is a vertical climb with "steps" and smoothed hand holds. It never hurts to have a spotter below where a pile of rocks helps with the first step.

One by one, we made it up the climb helping each other with this and that. And, taking a few photos of our effort.


Soon after the dry fall, we came to one of the canyon's caves. There was only one hiker in the group that had not seen this cave with graffiti covering the entrance area. She climbed up to take a look while we waited outside. To really explore the cave, you need flashlights or headlamps so she returned without going all the way in. Continuing up the canyon, I tried to take a few different routes than usual. There's always more than one way to skin ... uh, to change a light bulb? Anyway, we had a lot of fun climbing up the long canyon and when we got to the big fork where we usually take a left, we took a right.

It is a mile down to the apex of the finger ... and a mile back. There is a trail halfway down that connects both sides of the loop.


The north side of the loop (our descent side) becomes vague at the crossover and we missed it. The crossover is very short so we turned right at the south side of the loop when we reached it. Our break was taken at the end of the finger where we watched the line of 34 horse and riders climb up Fossil Ridge Trail across Echo Canyon. The view from this perspective is unique and fun to see once a year. After our break, we decided to take the north side trail back up to the crossover then continue on the south side. (Kind of a figure 8!) Anyway, we did this and returned to the SARS Trail to turn right.

We passed the north 1st Finger / SARS Trail junction right away and continued on until the SARS Trail turned right onto the old mining road.

Following the rocky road/trail, we passed into the mining property as we neared the SARS/Echo Canyon Trail junction. We turned right on the Echo Trail then just before the 1st Finger junction forked to the right, we passed back into the Red Rock Canyon NCA.


If homes are ever built this far into our playground, a simple bushwhack down from the road/trail to the 1st Finger/Echo Canyon Trail junction would do the trick. We love North Blue Diamond Hill and this whole idea of building homes that encroach on our habitat is stomach turning.
We followed the Echo Trail down passing two sets of a single switchback. Just past the second single switchback, a drop into Echo Canyon can be made. However, today, we continued down the Fossil Ridge Trail that runs parallel to the canyon above it. It is a beautiful trail decorated with dark boulders and cacti.

Today, it was also decorated with fresh, all natural, horse poo from those 34 horses we saw earlier! It's all good. Hiking can get dirty! Just step over it!

The day had been windy and cold but in the canyons, we were fairly protected much of the time. We were comfortable until we reached the exposed part of Fossil Ridge as the ridge trailed down into the desert near the parking lot.


I tried to get a good echo out of the Echo Canyon Overlook from Fossil Ridge Trail then the long Fossil Ridge descent was windy and cold. Finally, when we hit the desert floor, we were very near the cars. It had been a great and happy day as we trudged along at a strong pace. What a workout! And, what a great group that was right behind me every time I turned around! 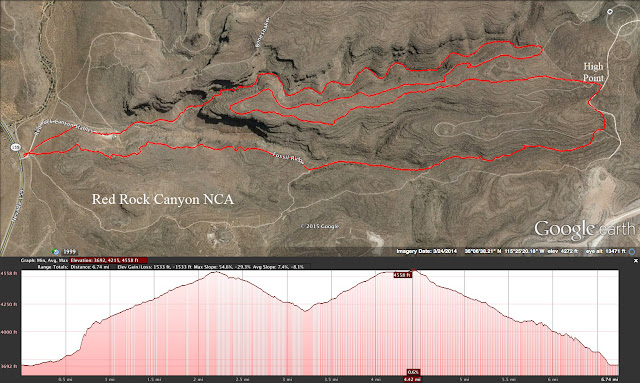 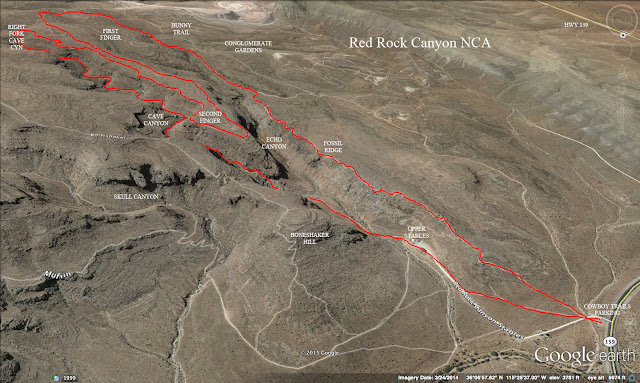 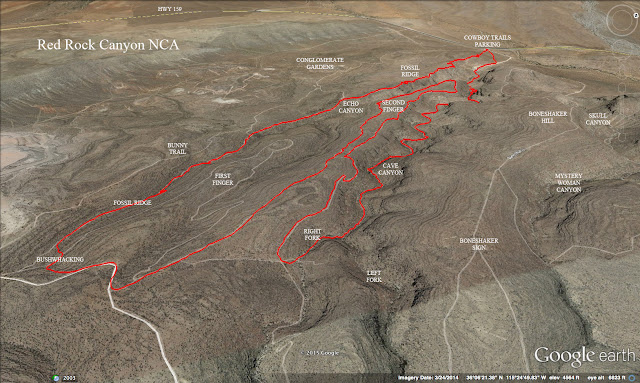 Posted by Kay Blackwell at 9:39 AM