Waaay up on Northshore Road at mile marker 40, there is a beautiful turnout and picnic area. An 80 degree pond sits among the area being fed by a free flowing spring. Palm trees surround the pond and signs warn of the amoeba in the water that could easily get into your brain through your nostril passage and have a feast! Thirteen hikers arrived here for the Pumpkin Parfait Canyon hike that I have not done in a few years. Why did I wait so long? This is the location of the major northeast-trending Rogers Spring fault.

The trace of the Rogers Spring fault is marked by a line of discontinuous springs along the cliffs to the left of the Northshore Road. Springs occur here because movement along the fault has placed permeable rocks against impermeable rocks. Groundwater that easily flows through permeable fractures in the limestone and dolomite encounters less permeable basin fill at the fault.

The basin fill acts like a dam, and water discharges from low points along the fault trace. The shallow groundwater, which reaches the surface in a few springs, is capable of supporting vegetation.


The hike starts out by crossing the bridge over the pond outlet and following a trail that goes west before it heads up the hill to the north. This is a gentle but lengthy climb up to the top of a ridge. While climbing, wide views of Rogers Spring fault line and Lake Mead spread out all around. Our pace was palatable by everyone participating. Then, at the top, we took a short breather with a lot of photos. Next, the trail dropped over the other side and eventually into a small wash. This route is considered a shortcut even though I think it's really just a chance to have some scrambling fun and warm-up before all the scrambling that was to come! This route is not as travelled as the longer route and a catclaw acacia covered the entrance of the small wash. We circled around the large bush as seen in the second photo below.

After this short but sweet wash, we emerged onto a flat desert terrain where Ralyn spotted a baby horned toad lizard. He was only 2 inches long and he was hiding the best he could while we took photos!


On the way up, we went through a small slot, found several seabed fossils and honed our scrambling skills. At one point, the main canyon takes a left turn. This turn, in case you might miss it, is marked by some red sandstone color in the side of the mountain ahead. We made the turn and then the group began spreading out as some hikers began looking for fossils in the wash boulders. The scrambles were interesting and had offerings for hikers that wanted more of a challenge and less of a challenge in several of them. Only the hikers that stepped out in front caught a handful of ticks today. Why are they so bad this year?? 😧

The best - and only - defense against the ticks is to just keep looking for them on your clothes ... and other hikers' clothes. (What are you lookin' at? ... Just a tick crawling up your pants!)

At the top of the canyon, we started to see color. First, red Aztec sandstone then the red faded into an orangey mustard color. Oh, ... pumpkin!


We bouldered our way all the way up to the Pumpkin Parfait Rock Wall to have our break on the rocks where we could also see Lake Mead in the crosshairs of the canyon. It was a fantastic perch! As we sat comfortably, we noted that the rocks above us where the canyon climbed up to the ridge had probably been climbed by area rock climbers and adventurers. The last of the hikers came climbing up the last hundred yards having marked with cairns, the best of the fossils that they found. There were many! Then, after the break, we started the long scramble down the canyon leaving the colorful area. We noted the fossils when came back to the cairns that Chuck and John W. had placed minutes earlier.

The scrambles seemed completely different from the top down. For me, there was a lot of sitting and sliding. Or, as some would call it, five-point hiking. (Hey, it saves the knees!)

Each time the group got a little too spread out, a call was made to wait and gather again. Today's wonderful hikers didn't seem to mind as we waited. It was a good time for tick-checks!


As we passed through the slot, I didn't even realize that we had already passed the landmark color corner. We followed Chuck down past the flatter area of the wash; passing the large cairn marking where we had dropped into the upper Pumpkin Parfait Canyon. Now, we were entering the lower canyon. Immediately, there was a great double drop! Totally doable. Out the other side, we hiked down the wide open wash for a while navigating the loose sand gravel. Up on the right, we passed a loose circle of rocks. Ancient Piautes? No one seems to know but they are still there year after year. Next, the most scrambling of the whole hike ensued!

Compacted in just over half a mile, the lower part of Pumpkin Parfait Canyon offered obstacle after obstacle. Some hikers took the scrambles head on. Others found ways around.

The high walls filled with mysterious caves on either side of the canyon provided the right atmosphere. The imagination went wild ... again!


Rita was in the lead with a couple of other hikers. We watched her face as she turned a corner and exclaimed something ... not sure what. Whatever it was, her faced said it was very exciting! I just hoped that whatever it was, it stayed there until I could get there with a camera! Yep. It stayed there! We turned that corner and there was almost a full skeleton of a male bighorn sheep lying in the canyon floor. (And, it definitely wasn't going anywhere!) It was so recently deceased that there was still fur on its skull. (No mutton left, BTW.) A mountain lion, somewhere, was sleeping it off. Circle of life. We took our photos and continued down the canyon.

The scrambles became a little easier and finally, the canyon began to open up. At this point, we focused on the right embankment.

On a rock at the top sat a cairn. A small trail climbed up the embankment to the cairn. This is the climb out. If you miss it, the canyon wash circles around in the opposite direction taking you away from the trailhead.


We climbed up the trail and found a flattish trail route across the desert terrain. After a few steps, we could see the cars. Watch for interesting plants here as you make your way over. Today, we saw chollas that were in the process of blooming. Very frilly! The hike was very well received today and everyone had a great time. Some of us will be sore tomorrow! Let's not ignore this one for so long again! 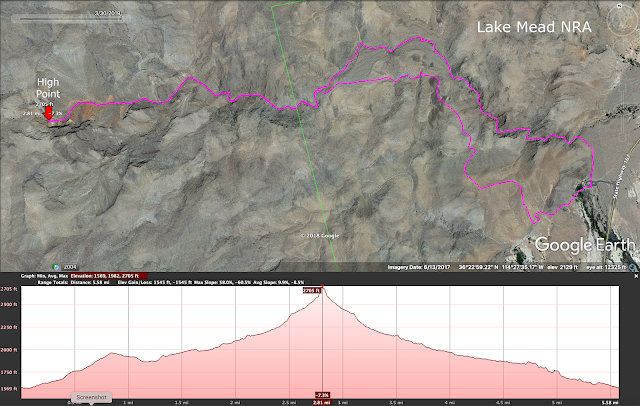 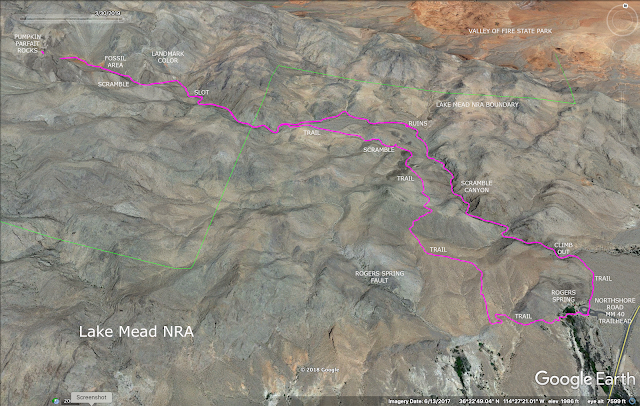 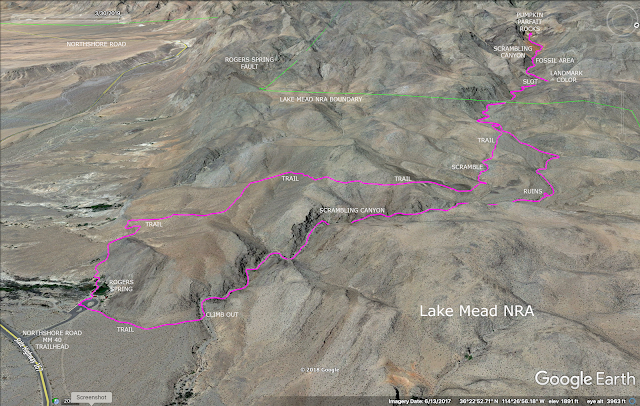