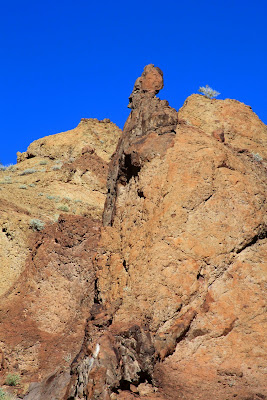 The Cleopatra-Hamblin paleovolcano formed 11-15 million years ago (Ma), in the late Miocene epoch – a time of mountain-building in the Basin and Range Province of the western US. This stratovolcano exists today as rugged erosional remnants. Deep canyons are incised through the tuffs, lava flows and breccias, exposing radial dikes and creating ragged summits. ~ MoapaPk ~ The above quotation was copied from an excellent source of information called summitpost.org. More geologic and hiking trail information about this area can be read on its Cleopatra-Hamblin Paleovolcano page. 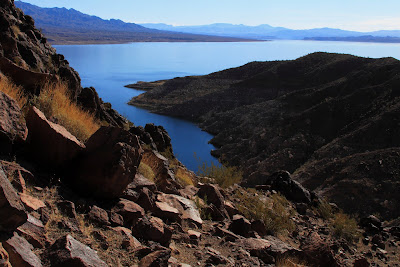 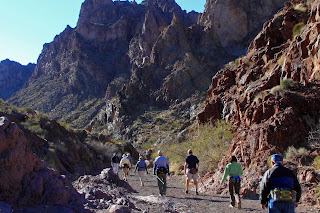 Fifteen hikers descended into one of these volcano created washes today called Cleopatra Wash, a hike that culminates at Cleopatra Cove on Lake Mead. The trailhead is located off of Boathouse Cove Road which is a high clearance road that intersects with Northshore Road at mile marker 30. 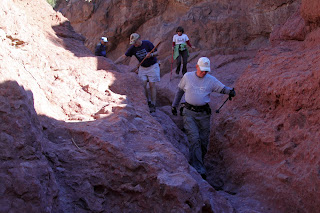 We arrived at the trailhead around 9am. The beginning of the hike seemed tame but as the hike progressed, we would encounter several dry waterfalls. Each waterfall had its own character and most were negotiable. However, all of the falls had an "up & around" that could be utilized if the hiker doesn't mind a little slippery rock and dirt. 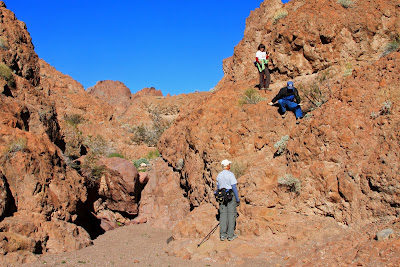 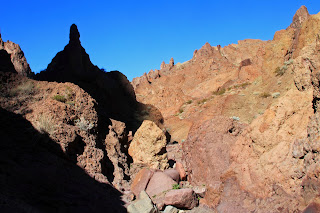 The 3.5 miles of downhill went by fast. We stayed together as much as we could. Somewhere in the middle of the hike, we saw the "Cleopatra Rock" up to the north side of the trail as seen in the top photo. It is seen most easily on the return uphill. 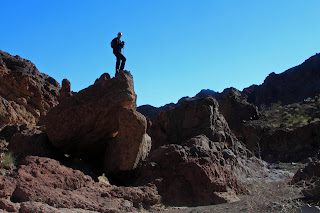 Sunlight in the canyon is late in coming. The shadows create a difficulty in getting good photos. The photo above shows an interesting rock formation in total shade. On the return, it was in total sunlight! In the photo to the right, Dan perches high on a rock awaiting a view of those hikers who were bringing up the rear. 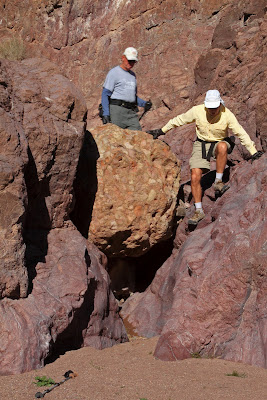 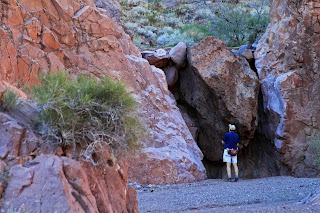 The photo to the left shows the last and most difficult of the waterfalls. After going up & around, Ed went back to study it for later reference. In the photo collage at the bottom of this entry, one of three hikers who climbed up the fall is seen looking for hand holds. 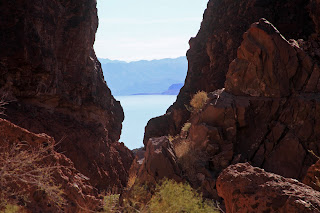 When we reached the slot at the end of the wash, we were met with the view on the right. Lake Mead beckoned deceivingly through the slot. Knowing about the thirty foot non-negotiable waterfall at the end of the slot, several hikers climbed down as far as they could before returning to go up the hill to the south to reach the cove. 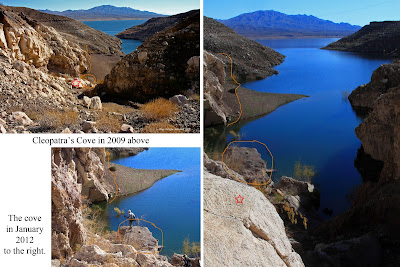 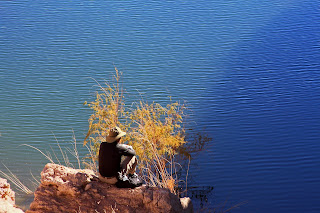 The second photo of this entry shows a view of the lake from the top of the hill before a tricky descent down to the water. Jerry takes a rest on a rock above the water where two years ago there was dry land. The water has risen around thirty feet this year and an attempt has been made to show the difference in the water line in the collage above. 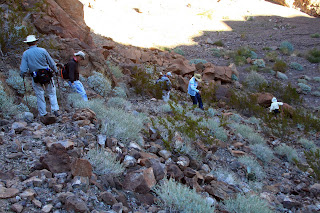 After our snack break, we turned around, went back up to the top of the hill, went back down from the hill to the wash and began hiking back up the wash. Each dry waterfall presented new obstacles on the up swing. By the time we got back to the cars, we were pretty beat. However, this hike is a great one and it will likely remain on the list of winter hikes for the club. 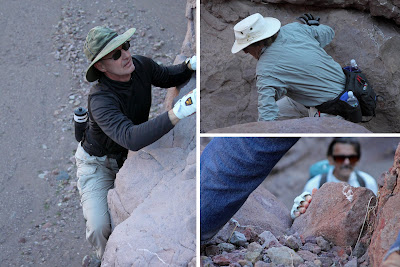 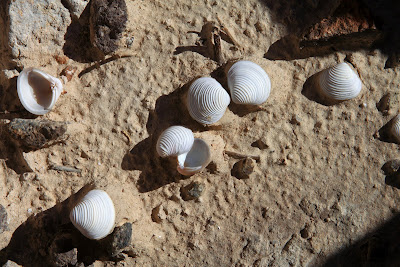 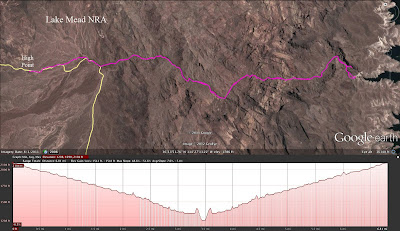 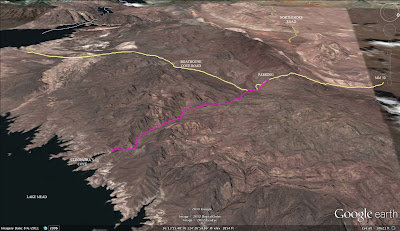 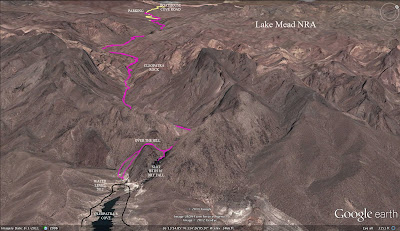 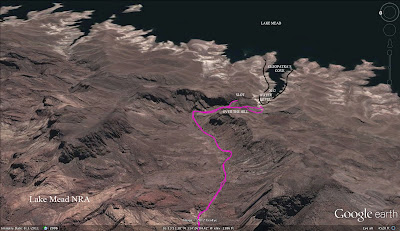 Someone is attempting to imitate our blog site. To reach our official website address, use "AroundtheBendFriends.com". If you are on another site that looks similar to our website, you may be looking at an imitation and not our official site. We do not post advertisements, political views or trash on our site. Imitations may do this. If you use a search engine make sure it takes you to AroundtheBendFriends.com (or our present address http://aroundthebendfriends2.blogspot.com/) and not to some other imitation. The best thing to do is to place the real page on your bookmark list. Thanks.
The maps on this site should only be used by those hikers skilled in route finding and trail research. The author will not take blame for anyone not being able to follow the maps that they have printed out and not backed up with research. Please take note that few trails in the Las Vegas area have signage. Learn where you are. Learn the trails. Have great hikes!