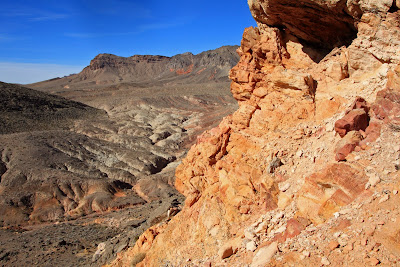 View from the top rim rocks of Colorful Canyon. 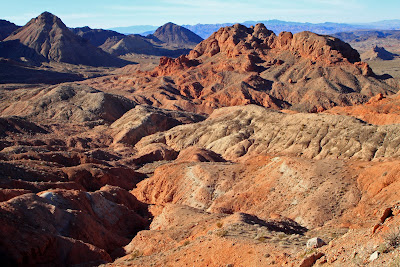 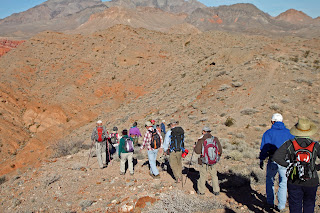 On this windy morning of January, seventeen hikers set off from Mile Marker 20 on Northshore Road in the Lake Mead NRA for a hike to a colorful canyon area approximately four miles from the parking area. Utilizing the trail that we have taken before to the North Bowl of Fire, we headed on up the hill. 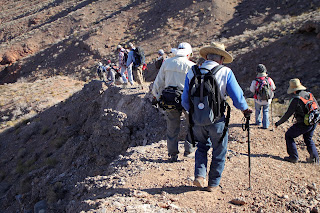 The trail took us up then down a slippery slope. A wash was next and then we dead ended into the Callville Road which we followed for a short distance. We turned right into a wash and soon exited the North Bowl of Fire route by continuing in the wash. 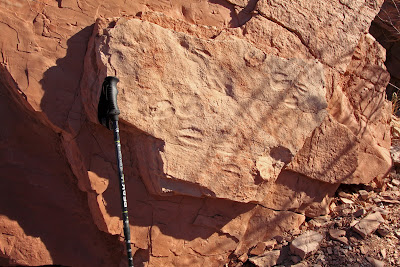 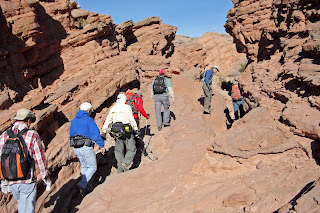 About two miles into the hike, we came upon the famous "camel tracks" of Lake Mead. Through short research, we learn that the tracks may be from the prehistoric animal called the camelops whose fossils have been located, in particular, in Mesa, Arizona. Wikipedia tells us the following:

Camelops first appeared during the Late Pliocene period and became extinct at the end of the Pleistocene. Its extinction was part of a larger North American die-off in which native horses, camelids and mastodons also died out. This megafaunal extinction coincided roughly with the appearance of the big game hunting Clovis culture, and biochemical analyses have shown that Clovis tools were used in butchering camels.[1]

Because soft tissues are generally not preserved in the fossil record, it is not certain if Camelops possessed a hump, like modern camels, or lacked one, like its modern llama relatives. Camelops hesternus was seven feet (slightly over two meters) at the shoulder, making it slightly taller than modern Bactrian camels. Plant remains found in its teeth exhibit little grass, suggesting that the camel was an opportunistic herbivore; that is, it ate any plants that were available, as do modern camels. 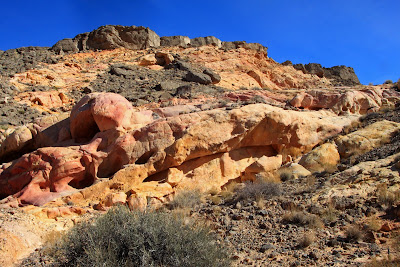 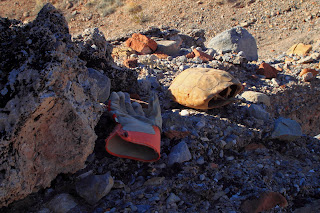 Continuing through the wash and over the desert terrain, we passed an empty tortoise shell about one foot in diameter. In the distance, we saw the rim rocks of the colorful canyon that we were looking for. Dropping down into the wash, we circled through the canyon filled with yellow and orange hues then part of the group decided to climb up to the conglomerate rim rocks to take our snack break on the cliff side. As we ate, we took in a fabulous view and tried not to slip down the steep slope. 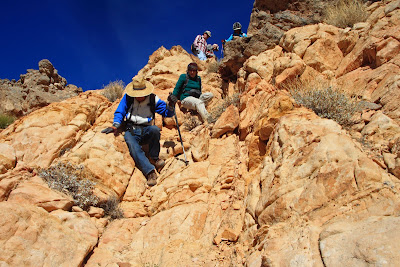 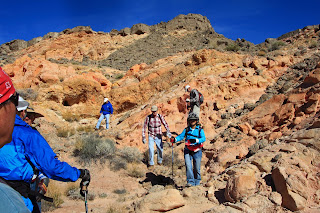 The climb down from the rim turned out to be a highlight as well. Easy does it! Joining the rest of the hikers at the bottom, we continued up the wash through a large gypsum vein. We passed another large vein of yellow rock then began crossing desert terrain again. 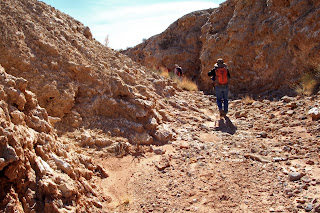 Junctioning with yet another wash with a few dry falls, the group separated yet again. Seven hikers took a more difficult route up and over the ridge to reach the cars. The remaining ten hikers continued up this wash and junctioned with the trail we had started out on earlier, only around half a mile up from the cars. Both groups arrived at the parking lot after 7.5 total miles at about the same time. An interesting and enjoyable day in a colorful part of the desert! 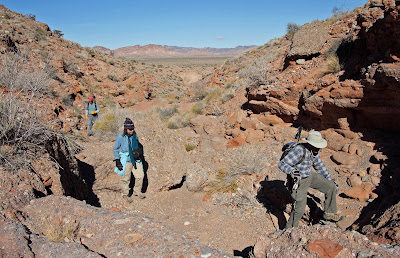 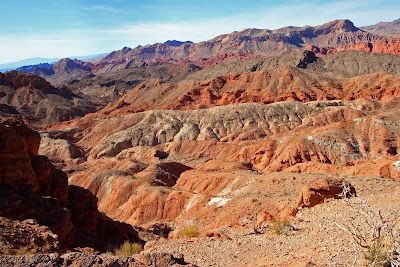 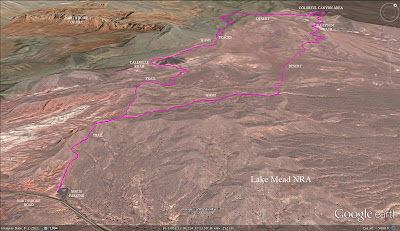 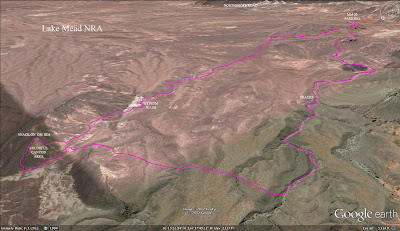