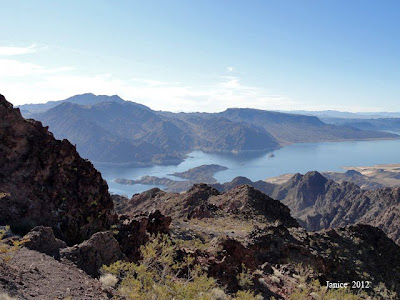 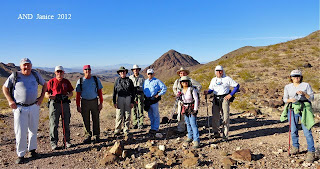 Mike and Janice reported on the hike to Hamblin Mountain today. The trailhead is located on Northshore Road at mile marker 18 and begins toward Lake Mead. Mike O'C's words are as follows:

There are blue-ribbon views from loftier spots, but few rival the Lake Mead panorama from atop Hamblin Mountain. Eleven hardy souls made the seven-mile trek. Astonishingly, seven trekkers were Hamblin virgins. Amazing. Less than an hour into the hike, a warm winter sun dictated a mass shedding of clothes. T-shirts seemed to be the apparel du jour. 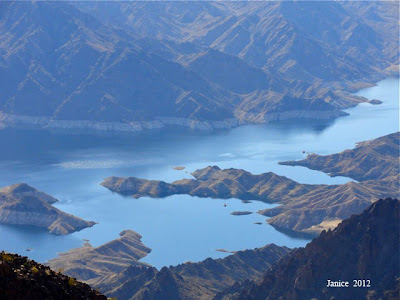 Gazing down at the water from the summit made sunglasses a necessity, as a glaring January sun reflected harshly off the shimmering lake. Brilliant rock formations brought forth a kaleidoscope of colors. After some friendly banter and an unhurried lunch, it was with some reluctance that we finally abandoned our lofty perch. Time to go down. 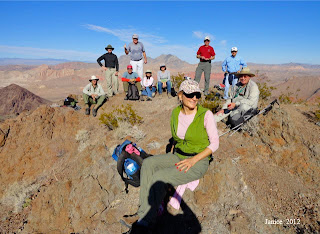 Looking for a bit of variation on the descent, we veered off the trail and eventually intersected the 100- year- old Arrowhead Trail. This was the first highway built between Salt Lake City and Los Angeles, running through Las Vegas of course. The Arrowhead was the precursor to US Route 91 and eventually Interstate 15. Hiking across the rough terrain, it was hard to imagine vintage Model T Fords running over that same road. Our forefathers were a rugged bunch. 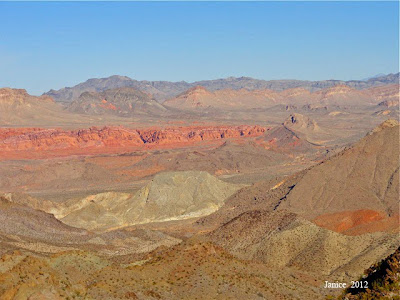 Sunshine, conviviality and a little bit of history. We had it all on this fifth day of 2012. 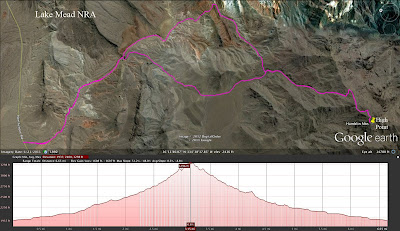 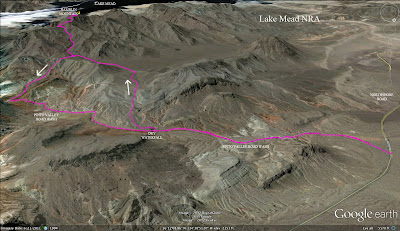