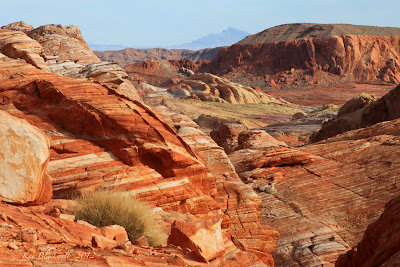 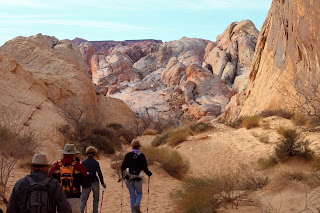 Brian D., the king of Valley of Fire State Park, did it again! What a fan- tabulous hike that he showed us today! Six miles of serious scrambling and endless beauty, steep ups and steep downs, red rock, white rock and striped rock ... and queue the bighorn sheep on the high sandstone wall! 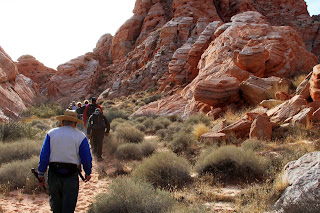 To begin the point to point hike, we drove to the end of the scenic drive that runs through the park. As we climbed up past the Visitor's Center, we passed by a movie or TV set where they were filming with the dramatic backdrop of the high sandstone wall. A nice looking man with a million dollar smile peered into our vehicles. Too bad we had no idea who he was! Anyway, we began our hike at the White Domes Trailhead. 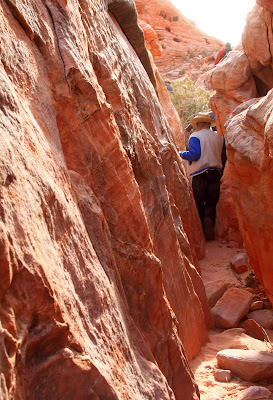 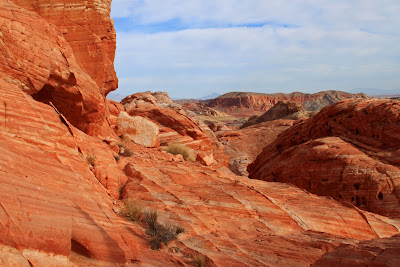 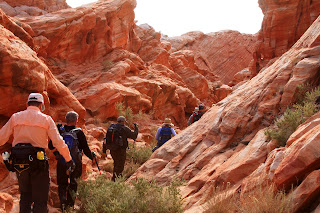 The warm- up for the hike was the last third of the Slot Canyons hike that we did last year but, instead of turning left to see the killer view near the end, we continued straight. This direction took us into another narrower slot and out the other side. 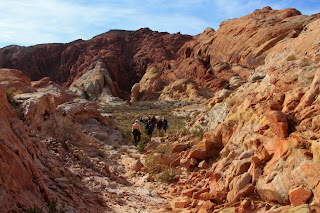 We wound our way around, through and up and over sandstone until we reached a particularly beautiful view seen in the second photo and the photo above. This was definitely a great substitute for the view that we missed earlier. From here on, the hike began showing its stuff. Colors and difficulty! 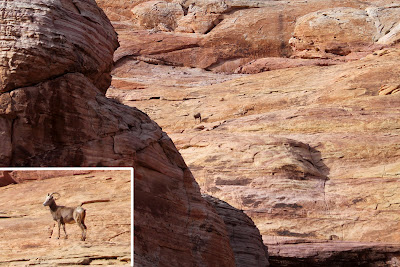 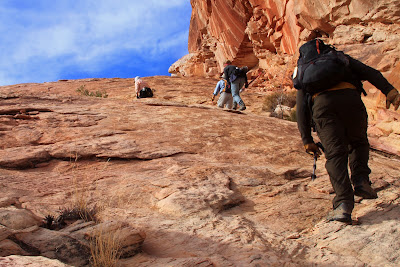 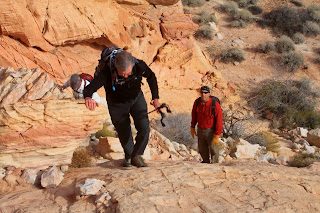 After watching a single female bighorn sheep dance around on the steep sandstone wall to our left, Brian announced that he hoped we had studied the sheep's movements carefully! Yep, we were next and up the sandstone wall we went. The wall was definitely a highlight of the hike. It's steepness dazzled us with a challenge for our vibram shoe soles. 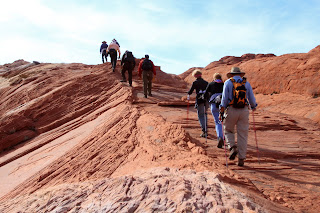 At the top of the wall, a labyrinth of sandstone met us with brief confusion. No worries. A dependable GPS reminds the way so onward and upward we travelled. 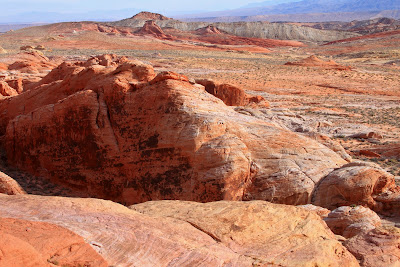 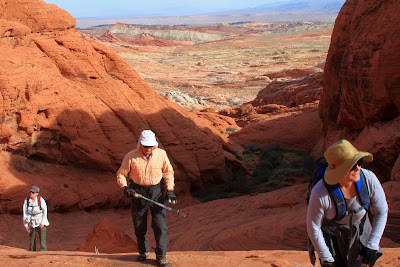 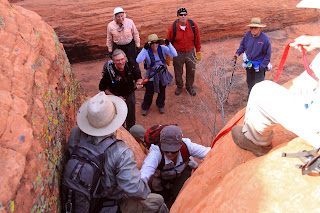 There was only one spot where a rope came out of Brian's pack. It was just a small step up but the hand holds were scarce and the five women of the twelve member herd of hikers, needed just a small assistance. 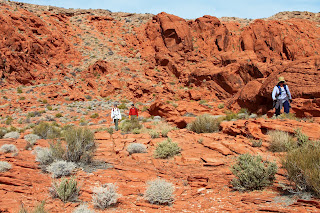 The next section of the hike included two separate plateaus. They were both similar in elevation and both were climbed and descended with much the same level of difficulty. The second plateau's descent was longer than the first and very very tricky. We were all relieved to reach the bottom in one piece. 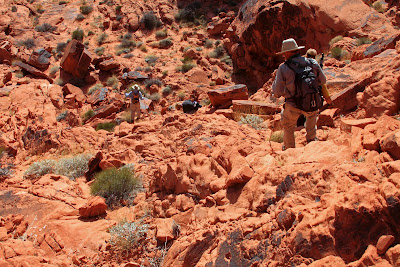 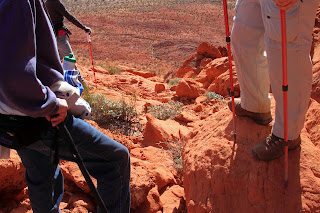 At the end of the descent, Brian alluded to the fact that there might be one more bit of a challenge still to come. We crossed another half mile of relatively easy desert terrain and came to the "edge." We had reached the drop off of the Valley of Fire plateau where we could see the park approach highway far below us. The steep descent was a commonly used thoroughfare for hikers coming out of the park in this direction. Down we went! 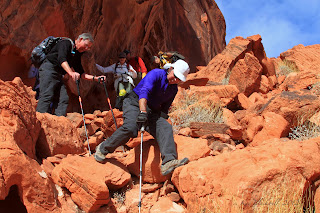 The steepness was cushioned by many solidly placed rocks and boulders. There was also a well- travelled trail that we followed. Safe at the bottom, we began crossing the desert to the Visitor's Center that we could see in the distance. The filming crew was gone and park visitors roamed about as we waited for the car drivers to return with our rides. Strenuous, yes! Worth the effort, YES! 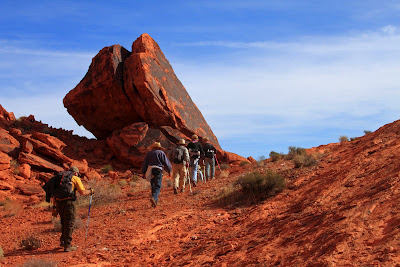 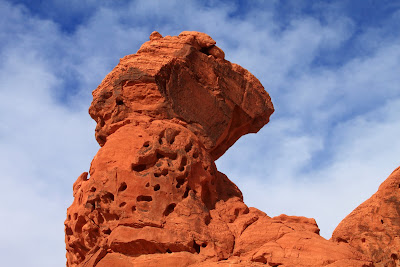 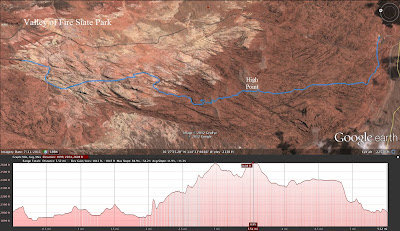 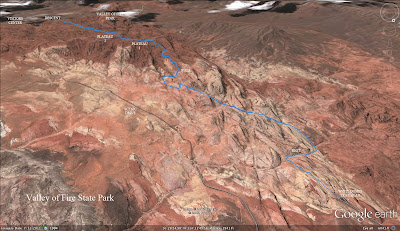 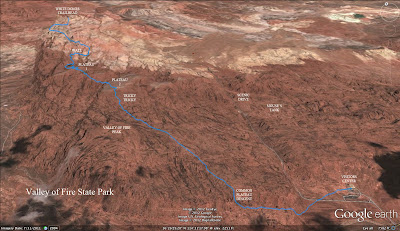 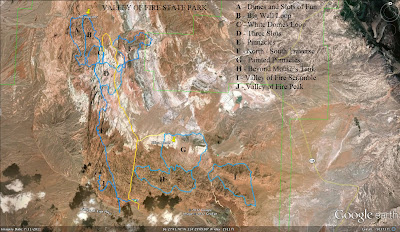 Looks like a strenuous hike and seriously beautiful. Congratulations, hikers and thank you for sharing the photos and the experience.