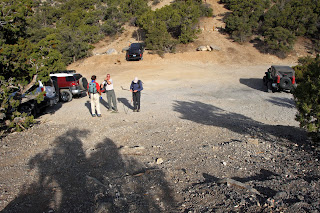 It was another one of Tuesday's Great Adventures as the Around the Bend Friends scheduled and accomplished their first hike to the peak of Bridge Mountain. Many of the hikers had hiked the formidable peak before, however, today was the first official Bridge Mountain hike for the club. There were, at least, five hikers of the sixteen that had not been to the peak before. It was a very exciting and fun day that started off with successfully driving five high clearance vehicles up to the Red Rock Summit on Rocky Gap Road. With radios in hand, this thrill ride lasted about an hour as we bounced over large rocks and dipped through gulleys. The road narrows down on the side of cliffs and wiggles its way up to the pass. When we exited the cars at the top, we were all quite proud of ourselves for not damaging any of our vehicles. 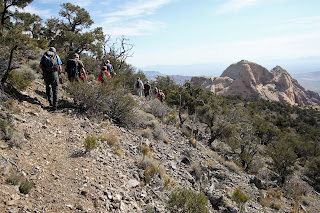 With the luxury of having driven up the road, the hike up to the ridge was a lot fresher than it felt on this same section of trail that we hiked for the Two North Peaks hike of last week. All sixteen hikers gathered at the trail junction where the North Peak (Limestone) and Bridge Mountain trails split. After climbing around 700 elevation feet in the first mile, we were ready to make a 1000 foot descent over the next mile and a half. 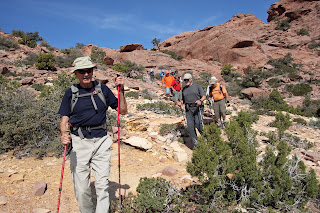 We rounded a small peak to our left where we hit our high point of the day and spied Bridge Mountain in the distance. Crossing over the limestone / sandstone line, we began a steep switchbacked descent through a layer of red rock. Now, we had a magnificent view of North Peak (Sandstone) to the left and Bridge Mountain to the right. There was still a lot of sandstone between us and the target peak. 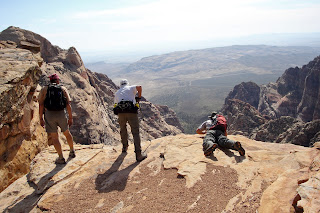 At the bottom of the red sandstone, we arrived at the cliff that overlooks Fern Canyon, the right fork of Pine Creek Canyon. It was a looong way down! Some of us jumped over a crevice nearby that dropped hundreds of feet down between the rock just for fun. Maybe not everyone's idea of fun. Anyway, the scrambling portion of the hike was about to begin and we were all anxious to get started. 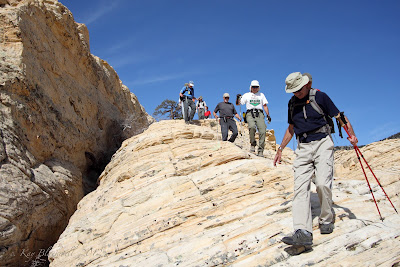 Descending to base of Bridge Mountain Peak. 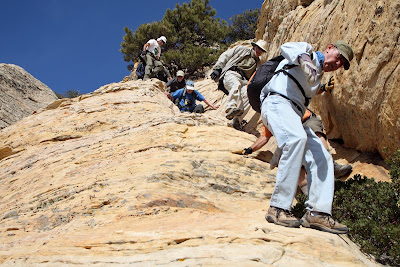 Scramble descent to base of Bridge Mountain Peak. 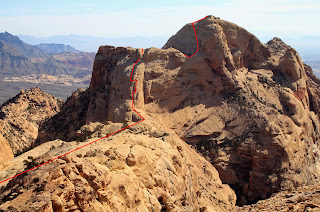 The scrambling involved several drops down yellow sandstone which was littered with hand holds and foot holds. The intricate route was once memorized by landmark trees and rocks by those who passed through here. Now, as if endless cairns were not enough, someone has gone through the whole trail, beginning to end, and painted arrows and other trail markers on the once beautiful pristine rock. There were painted markings even where the trail was obvious. A bit of a disappointment. 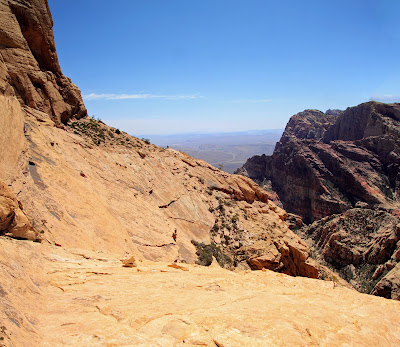 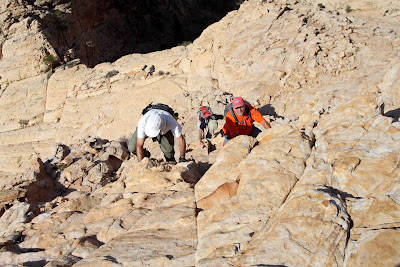 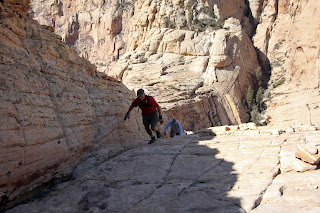 When we reached the base of the final ascent, the newbies were given instructions and up we went through the crack and/or outside the crack on the right side. The writer would like to say that the whole final ascent thing seemed much steeper than the first time she climbed it. Perhaps it was the perspective and/or adrenaline rush involved in the two different hikes. Nevertheless, knowing what was to come might have removed some of the fear of the climb. In the photo to the right, a hiker is seen climbing up from the ledge at the end of the initial ascent. 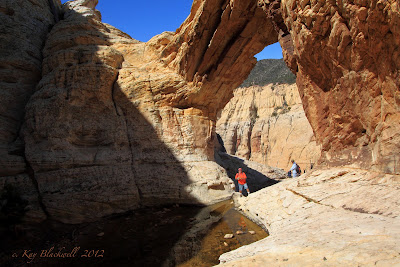 The Bridge on Bridge Mountain. 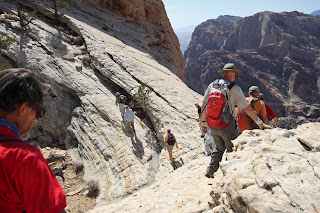 The large sandstone bridge guarded an enclosed space that held a tenaja and large pine tree that forever leans against the wall. We climbed up that wall to the next level where we could see a large and very deep tenaja with around two feet of water nearby. The famous Hidden Forest of pine trees thrived in the vast well to our right. We circled around the forest while staying high on the sandstone to our right and climbed to the peak on a steep diagonal route. Several of us took a couple of breaks to breathe the air at this almost 7000 foot altitude. 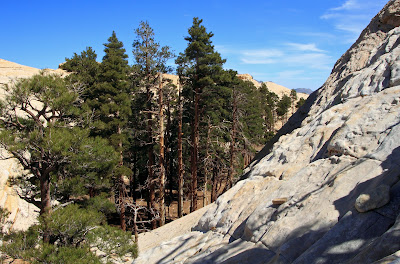 The Hidden Forest on Bridge Mountain. 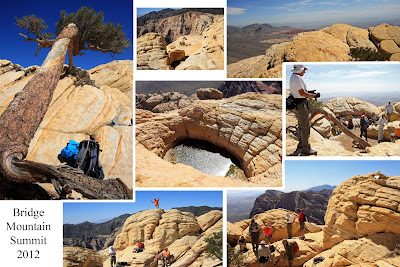 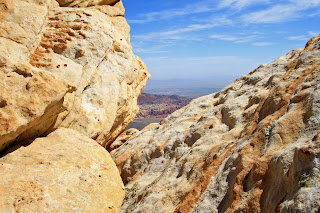 When we arrived at the peak, we elected to spend our break in the nook and cranny of the muffin peak of Bridge Mountain. Okay, that was a stretch. There is a small crater in the center of the peak which provides shelter from the wind. A single pine tree grows in a supported fashion up from its floor. A few of us wandered around outside the crater and a few of us actually climbed the ten more feet to the highest point. It had been a tough climb for many of us so we used our rest break wisely. 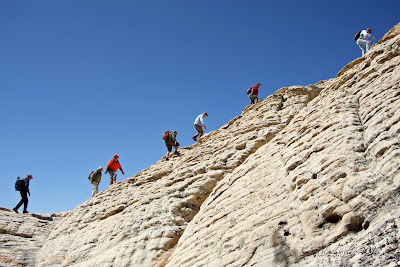 Return as seen from Hidden Forest. 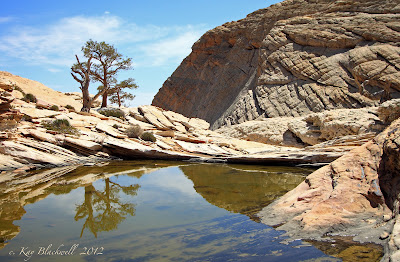 Nearby tenaja just above Hidden Forest. 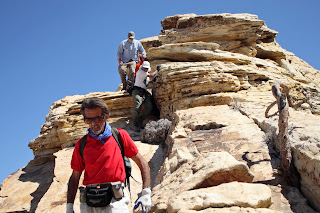 Carefully stepping down from the peak on the steep sandstone, we made our way past the Hidden Forest. The descent would be full of tiny steps and crab walks. There were also a few unavoidable butt slides resulting in torn britches. From the peak, we noted a promising tenaja brimming with water that we could easily reach so we took a side excursion to it on our way down before the bridge. 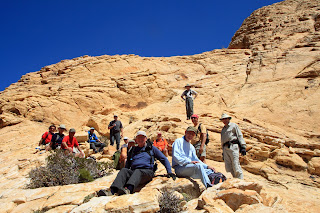 Part of the group of hikers skipped the water tank. The second group decided to cross the bridge for the return route. The photo above and to the left shows hikers as they crossed the top of the large bridge. After dealing with the crack portion of the descent (dicey to say the least), the whole group of hikers gathered at the base. Note the happiness in many of the faces ... oh, maybe that's relief! 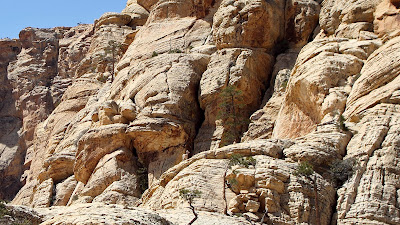 Lone Bighorn showing us the route up. 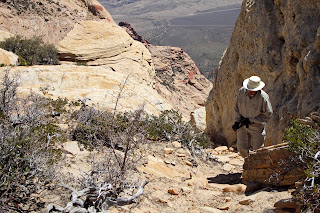 We still had to climb the difficult sandstone scramble  back up to the limestone layer. As we rounded a corner and looked up, we saw a lone bighorn sheep up on our trail. Maybe he/she saw the painted arrows and decided to explore. Anyway, we watched as the bighorn scampered impossibly up the walls. We followed. 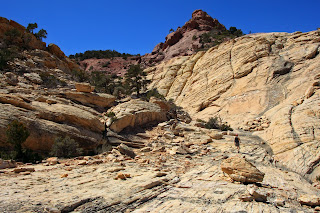 By the time we reached the red layer of sandstone, we had divided into two groups. We each made the climb out at our own pace and re-gathered at the trail junction sign. The descent back down to the cars was tired but jovial. All that was left was another hour of bouncing over big boulders on big tires. The Around the Bend Friends' first outing to Bridge Mountain can be declared a success! 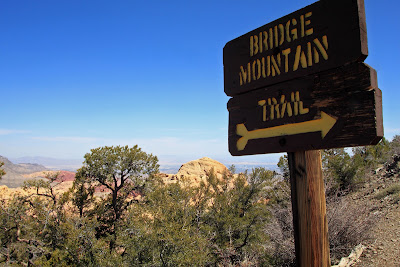 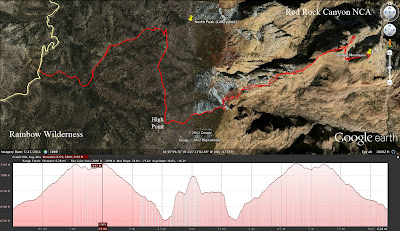 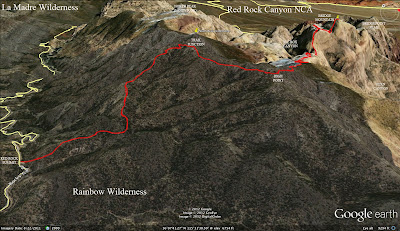 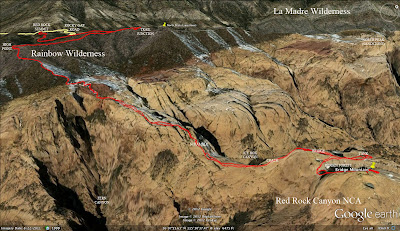 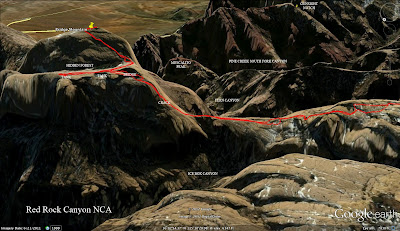 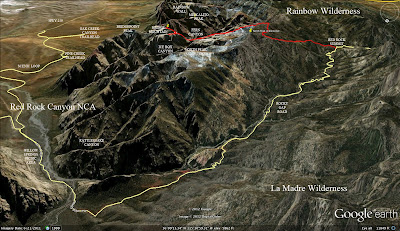 Posted by Las Vegas Cockapoo at 11:06 AM