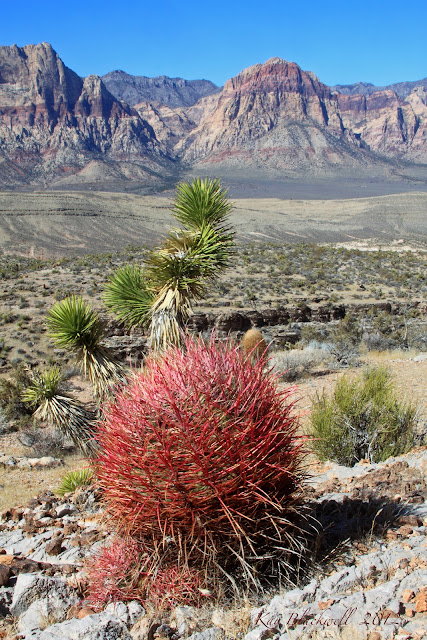 View from First Finger in the North Blue Diamond Hills. 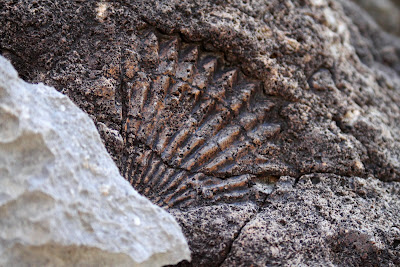 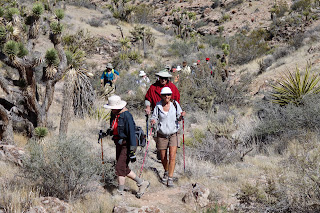 Thirty hikers came out for a relaxing hike up Echo Canyon (aka Fossil Canyon) in the North Blue Diamond Hills. The trail begins at the Cowboy Trails parking lot off of Highway 159. This canyon, as well as the rest of the area nearby, holds many ancient seabed fossils similar to the one in the photo above. As we started down into the canyon, we saw a chukar run by. Wikipedia gives us information on the bird as noted below. 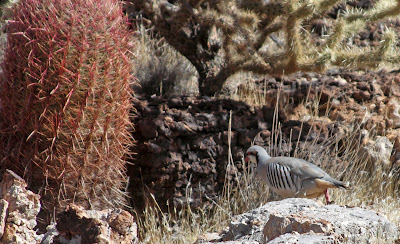 The Chukar Partridge or Chukar (Alectoris chukar) is a Eurasion upland gamebird in the pheasant family Phasianidae.  This partridge has well marked black and white bars on the flanks and a black band running from the forehead across the eye and running down the head to form a necklace that encloses a white throat.

Their habitat in the native range is rocky open hillsides with grass or scattered scrub.  They are not found in areas of high humidity or rainfall.

In the non-breeding season, Chukar Partridge are found in small coveys of 10 or more (up to 50) birds. In summer, Chukars form pairs to breed. During this time, the cocks are very pugnacious calling and fighting. During winter they descend into the valleys and feed in fields. They call frequently during the day especially in the mornings and evenings. The call is loud and includes loud repeated "Chuck" notes and sometimes duetting "Chuker" notes. When disturbed, it prefers to run rather than fly, but if necessary it flies a short distance often down a slope on rounded wings, calling immediately after alighting.

The breeding season is summer. Males perform tidbitting displays, a form of courtship feeding where the male pecks at food and a female may visit to peck in response. The males may chase females with head lowered, wing lowered and neck fluffed. The male may also performs a high step stiff walk while making a special call.  Males are monogynous. The nest is a scantily lined ground scrape, though occasionally a compact pad is created with a depression in the center. Generally, the nests are sheltered by ferns and small bushes, or placed in a dip or rocky hillside under a overhanging rock.

Chukar roost on rocky slopes or under shrubs. In winter, birds in the US selected protected niches or caves. A group may roost in a tight circle with their heads pointed outwards to conserve heat and keep a look out for predators. ~ Wikipedia ~ 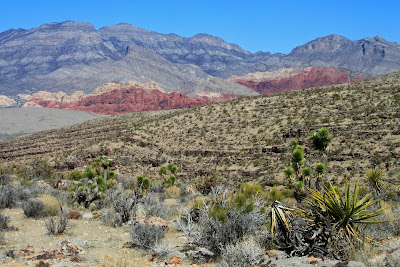 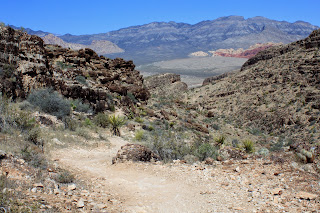 We hiked and scrambled up Echo Canyon for around two miles then turned to our left on the bike trail at the top. This trail took us on an outline of the First Finger which is a peninsula of land between Cave and Echo Canyons. We stopped for a snack here to enjoy the wide expansive view of the Red Rock Canyon escarpment. 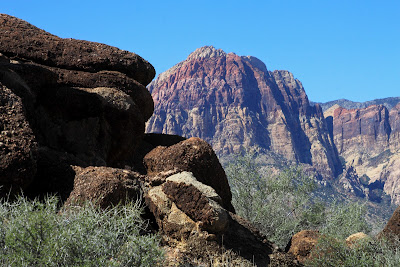 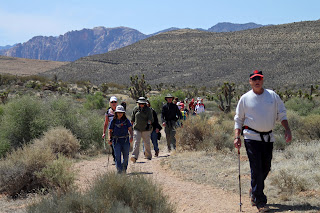 After our break, we continued on around the finger of land to return to the top of Echo Canyon. Staying to the left, we followed one of the trails that leads down the ridge next to Echo Canyon (aka Fossil Ridge). The air was fresh and clear after the terrible winds we had for the last couple of days. When we reached the cars, we had hiked 6.25 miles with around 850 feet in elevation gain. 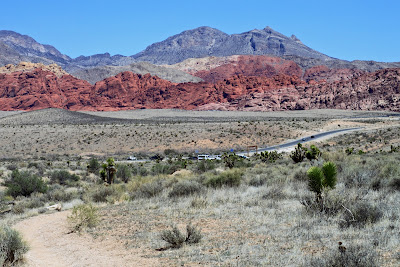 View of the Calico Hills from last leg of Fossil Ridge. 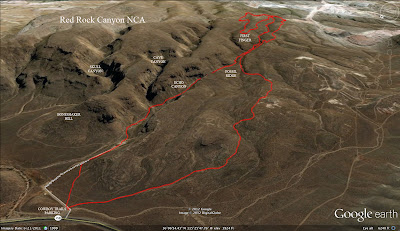