Once again, the AtBF hikers prove that a little cold wind doesn't deter them from a fantastic hike! Mike OC offers the information in this entry about a quick climb up Fortification Hill, that long flat hill you see from Hoover Dam and Bridge on the Arizona side of Lake Mead.


Let the four winds blow!  The only thing more brisk than the arctic north wind was the relentless pace to the summit.  Peerless Paul was on point and the man was on a mission to summit.  So at an hour when normal folks down in the valley were lingering over a second cup of Joe, Peerless and the AtBF crew were doing lunch atop Fortification Hill.  PB&J sandwiches and Gu.

Unlike yesterday's jaunt to Liberty Bell where the canyon walls protected us against the gale, today's hike was totally exposed.  Everyone was layered to the max, as eyes watered and noses ran throughout the morning.

But oh my, the view from on high was nonpareil!  The magnificent panorama lay directly in front of us--the Dam, the Bridge and the city, crowned by a snow-capped Mt. Charleston far in the distance.  And not a trace of smog in the Las Vegas Valley.  Just a scintillating, spectacular day.

And with the end of the world less than a day away, all eight hikers agreed that there was no better way to exit.
BTW:  The Kingman Wash Road to the trailhead is in excellent shape.  They recently ran a blade over it.  With decent tires, one may drive a sedan the entire 5 miles.  We actually encountered a Mustang convertible on the way down. 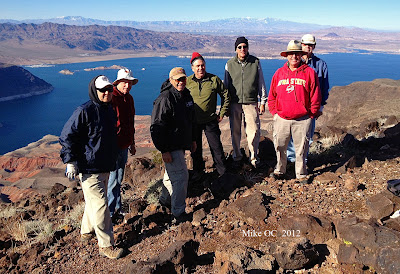 On the Top of Fortification Hill with Las Vegas in Background 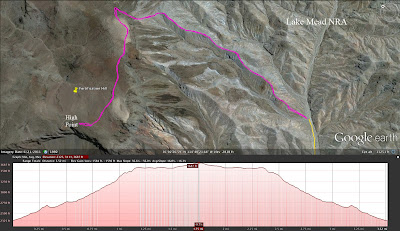 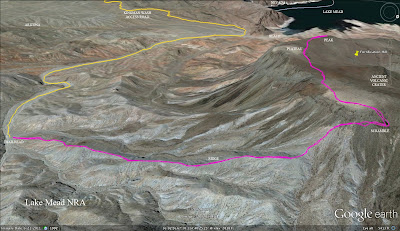