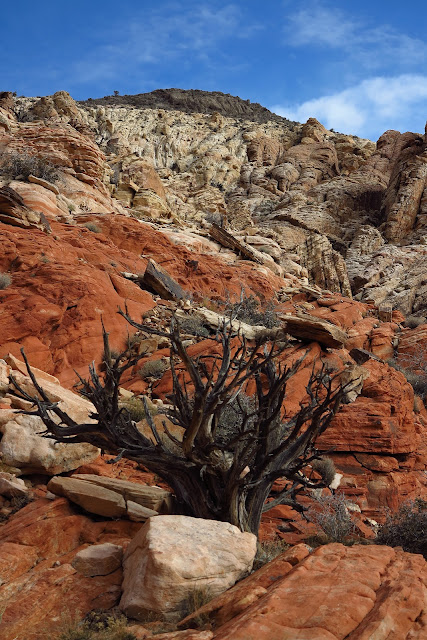 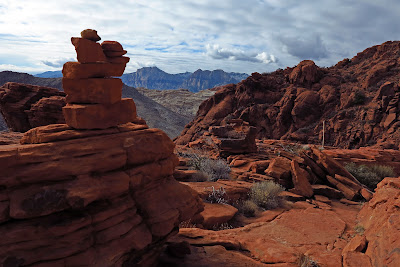 Cairns Remain the Theme of the Gray Cap Scramble 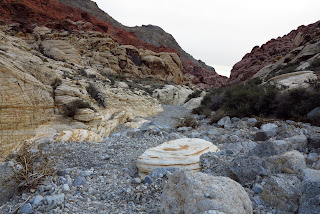 It was a very cold morning in Red Rock Canyon NCA but the rain clouds covered the city, not the conservation area ... when eight hikers started out from the dirt parking area in Calico Basin. We bundled up and began a brisk pace up to Krafft Saddle via 5 Stop Hill. We were warm by the time we crested the saddle and dropped down into Gateway Canyon. The hike was about to begin! Gray Fox Canyon lay up Gateway a little and off to the right. 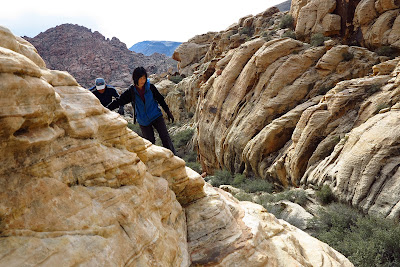 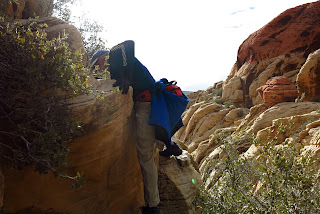 The Gray Cap Scramble is a serious scramble straight up the side of a sandstone mountain through a wonderfully challenging canyon that we have seen a gray fox in before. The route requires a lot of concentration, a respect for exposed areas and a lot of nerve! Tony is seen to the right performing a maneuver that is as difficult as it looks! Below, Mike leads the group across a steep area where there is little between the hiker and his/her sticky soled hiking boots. 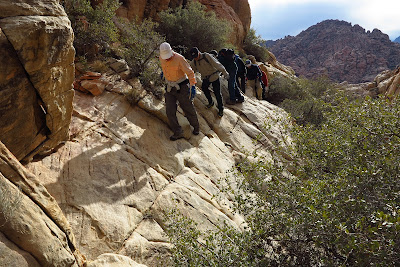 Mike says, "Just follow the crack ... this tiny little crack in the sandstone ... see it?" 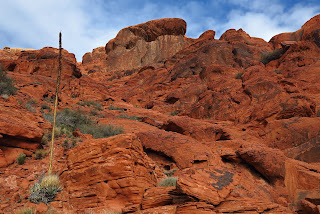 After climbing into the red rock, the group split up here and there while choosing routes that appealed to them. The goal was the huge red monster at the top of the photo to the left that we call rooster rock ... not sure why. The scramble led from cairn to cairn making it easier to know which routes were feasible. Just under Rooster Rock, we had reached the top of Gray Fox Canyon and into the yellow sandstone, we climbed. 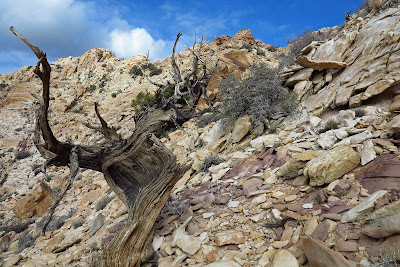 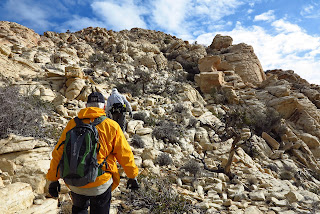 We found our bearings in relation to the traditional route up Gray Cap and climbed up to the "picnic table." Here, we junctioned with the traditional route and finished the climb to the peak on the trail. Taking a well deserved break on the peak, we watched as the clouds over the escarpment area of Red Rock Canyon began releasing a snow storm on the peaks. Becoming slightly nervous, we decided it was time to start our challenging descent through what we playfully call the "Death Zone!" 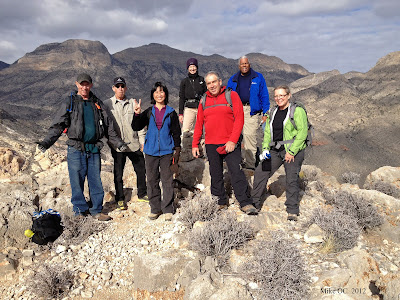 After 2.5 Hours of Scrambling - The Summit Photo 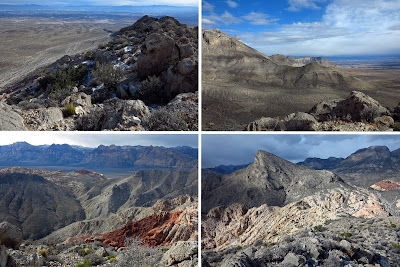 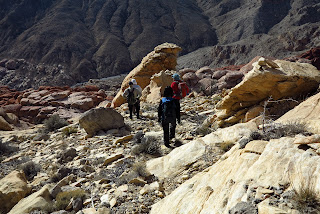 The descent drops straight down from the peak off of the limestone and into the yellow sandstone. Relying totally on the cairns below us, we descended very carefully and efficiently. We didn't rush. After all, we wanted to live to hike another day! But, we scouted the cairns and were sure with each turn down the precarious route. 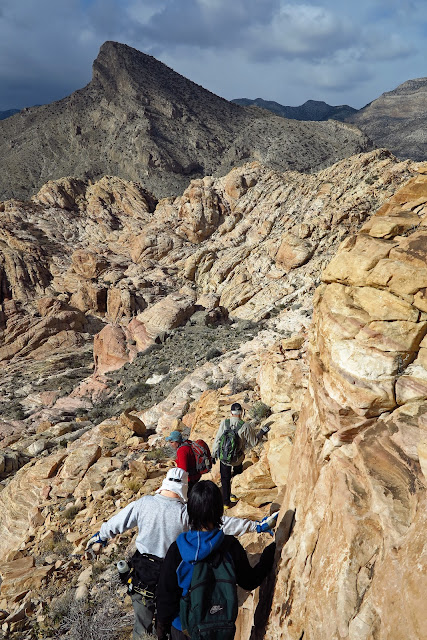 Dropping Down Through the Yellow Sandstone Layer 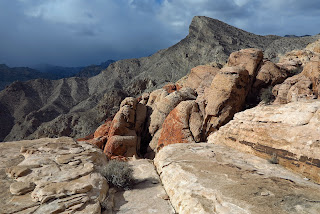 With Turtlehead Peak to the right of us, the views were beautiful. Even so, there was this small matter of an approaching snow storm. The dramatic weather and colorful rock gave us quite a show when we were able to lift our eyes for a few seconds. The yellow sandstone gave way to the red rock and the descent scrambles became a little more intense. There were at least two places where gravity was not too friendly as we searched for hand holds and toe holds on our way down. 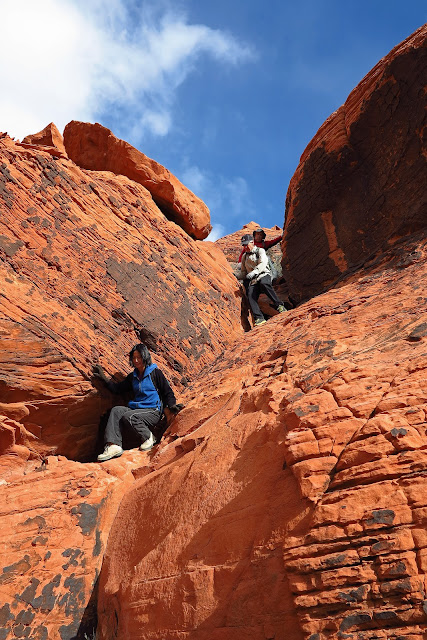 Dropping Down Through the Red Sandstone "Death Zone" 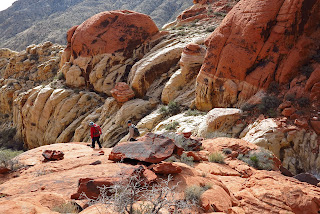 As we neared the ascent route in Gray Fox Canyon, the slope became less steep. Our big white rock as our point of reference was soon looming beside us and we found our way slowly back to Gateway Canyon. The weather had stalled over the escarpment and we were counting our lucky stars! The last part of the hike required a killer ascent back up to Krafft Saddle and a laborious descent back to the cars. This hike is definitely a great "go to" scramble for any time during the winter if the weather holds out like today. 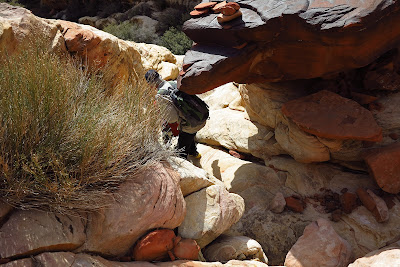 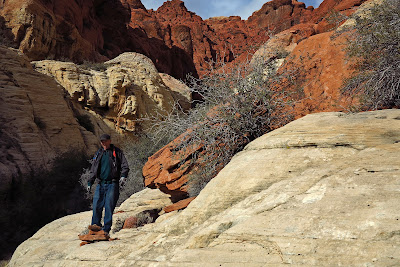 Putting Gray Fox Canyon Behind Us 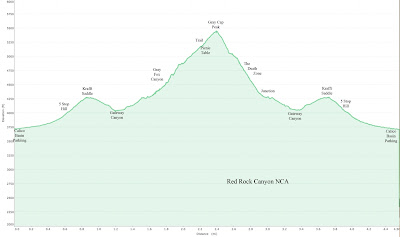 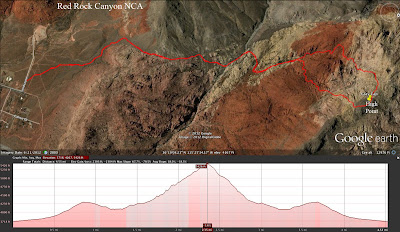 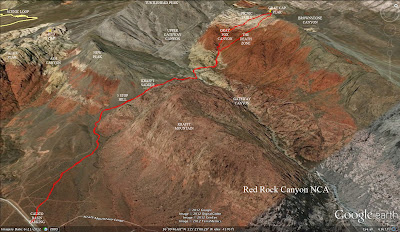 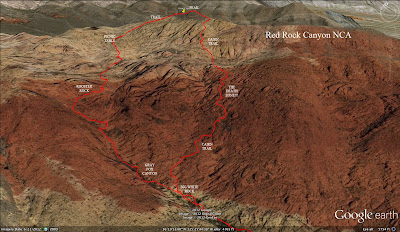