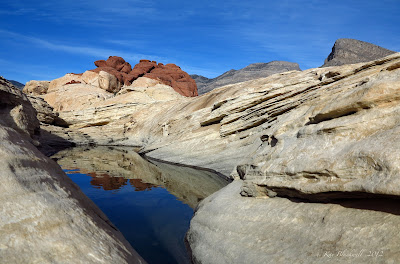 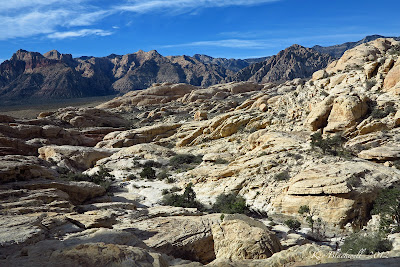 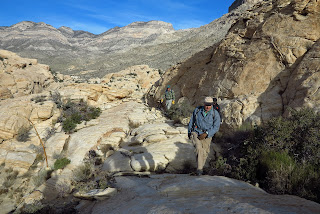 The weatherman predicted harsh winds by noon and very cold air coming down from the north. Nevertheless, eight hikers came out for a short and sweet hike up to the small peak of Red Cap on the northern end of the Calico Hills. We were all bundled up and ready for the onslaught. Several minutes into the hike out from Sandstone Quarry on the Scenic Loop of Red Rock Canyon NCA, we knew we were overdressed and protected from any wind that might come our way. Sweet! 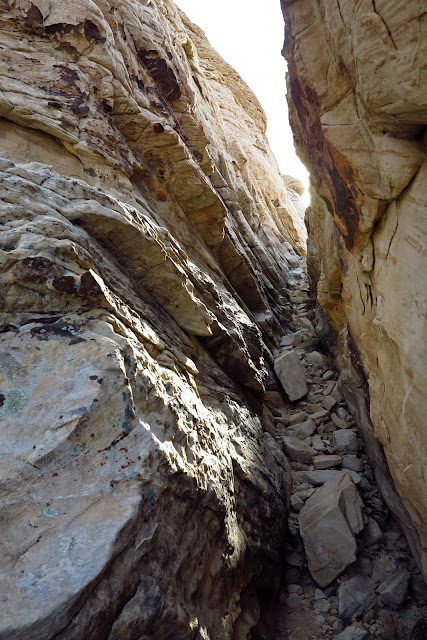 Slot on the Ascent 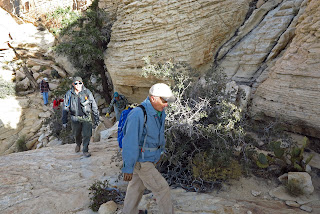 We circled around to begin the climb at the traditional start point up through an interesting crack that continued into a slot as seen in the photo above. All of the hikers were good climbers and we didn't stop for long as we worked our way up to the base of the wall on the left then on around and up to the level where there are several tinajas or natural water tanks. Every time we did stop, it was to take in the gorgeous views around us. This hike is definitely one of the most gorgeous 3 mile hikes in Red Rock Canyon. And, today's blue skies with wispy white clouds, made the hike a photographer's dream. 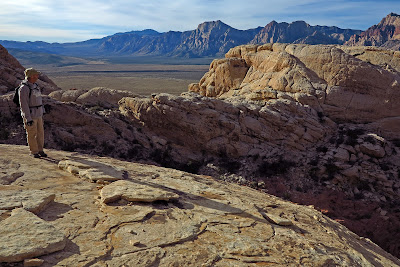 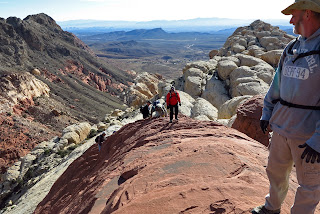 Red Cap, (also known as Turtlehead Junior because of its turtle shape as viewed from the south side), is made of two separate peaks. They are separated by a chasm which is not easily negotiated. Each peak has a different hike to reach them. Today's hike led us up to the slightly smaller of the two that we'll call Peak B. On the top, we took a short snack break and enjoyed the scenery until the wind seemed to be kicking up. We were exposed to the wind up there so we were anxious to not get chilled in our sweaty clothes. 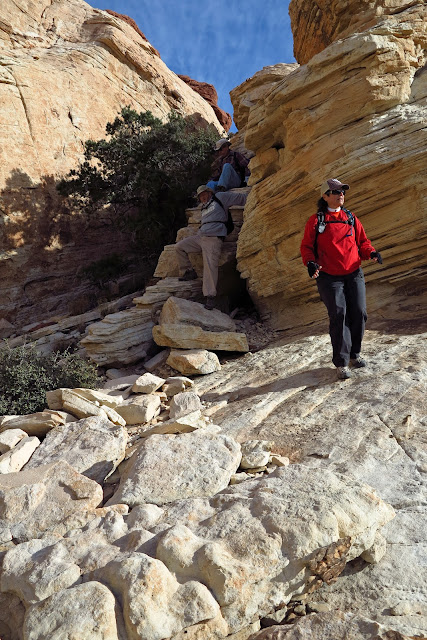 Descending From Red Cap Peak B 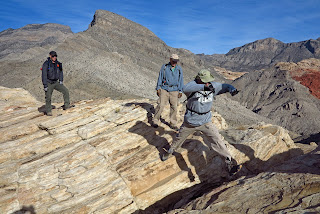 We descended back down to the tank level and began the tour of the tanks by hiking up to the top tank where a necessary photo was taken as seen at the top of the entry. Next, we leaped over a crack and scrambled down to a large tank that was full of water. This tank offers a nice panorama view with reflections and is seen in the long photo below. 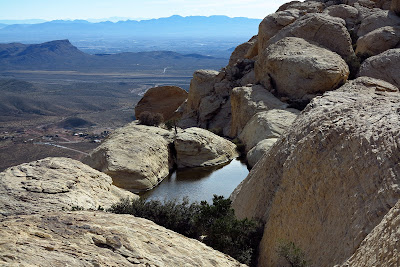 Large Tank From Above with LV Strip View 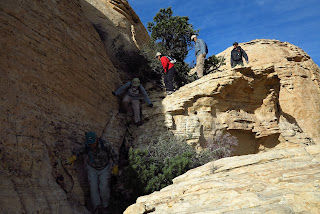 Turtlehead Peak is seen reflected in this tank. The photog hiked around to the other side of the tank to take the group photo then hiked back to continue the tank tour at a long tank hidden next to a wall where a full reflection of Red Cap Peak can be seen. This is also the location where a new descent would be embarked upon for the club. Down we went, into the crack behind the tank.

Eight Hikers (Including the Photog) at Large Tank 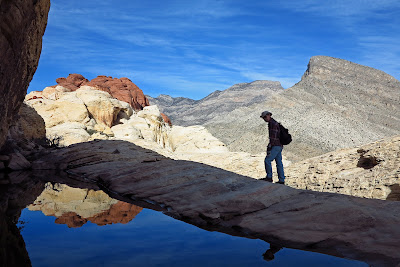 Don Stands Above the Start of the Descent 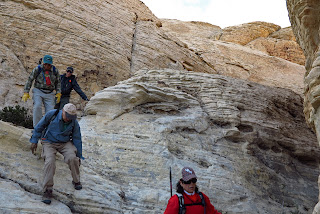 The descent is not difficult and doesn't offer dangerous exposure. But, it was challenging enough and the views were new and beautiful. There were several twists and turns then, finally, we dropped down off of the wall and easily worked our way down to the desert floor just above the top of Ash Canyon. From here, it was a small climb up through the desert brush to the old familiar trail that leads around the north base of Red Cap. 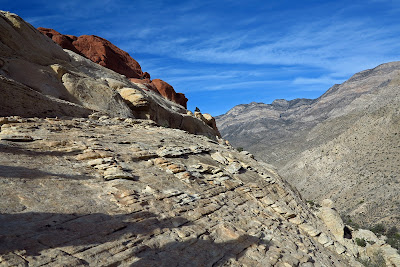 View From the Descent 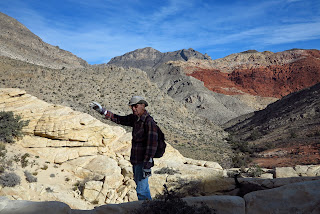 Turning onto the trail, we hiked our way back around and through the sandstone. We junctioned with the trail we started with and hiked out. Before we finished, we took a small side trip to the arch that lies amidst the sandstone near the old quarry. There, we found two loop ambassador volunteers hanging out while taking a small break before the Sunday masses began arriving at the parking lot. A simple up, down and around three miles. 800 feet elevation gain. A relaxed three hours. Very little wind. And, new stuff! 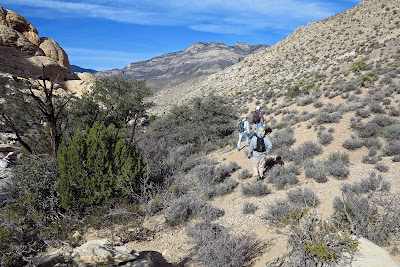 Connecting With the Trail at the Base of Red Cap 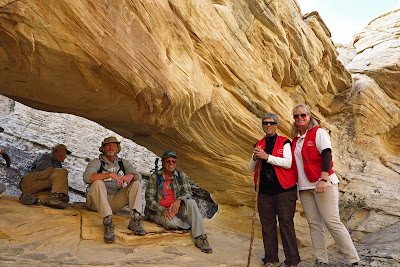 Two Loop Ambassadors Hanging Out at the Arch 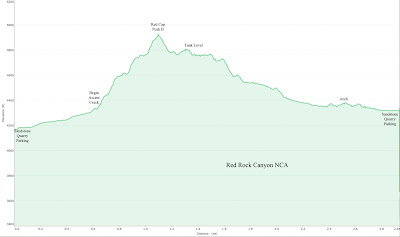 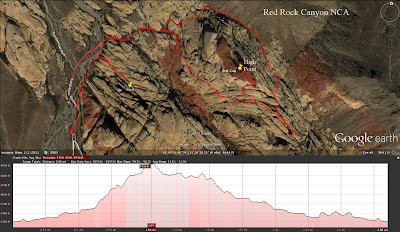 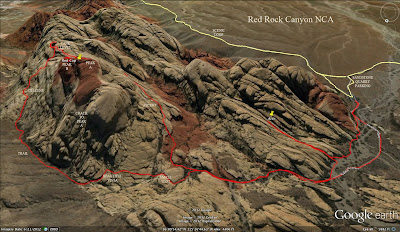 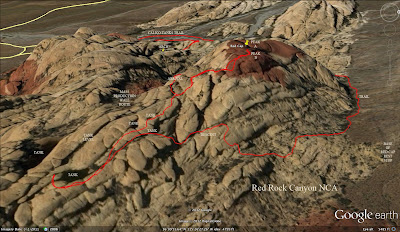