The hike to Hidden Forest is precluded by a 22 mile drive on dirt roads within the Desert National Wildlife Refuge. The roads, today, were in good condition and the drive took between 1.0 and 1.5 hours depending on the type of high clearance vehicle that is being used. 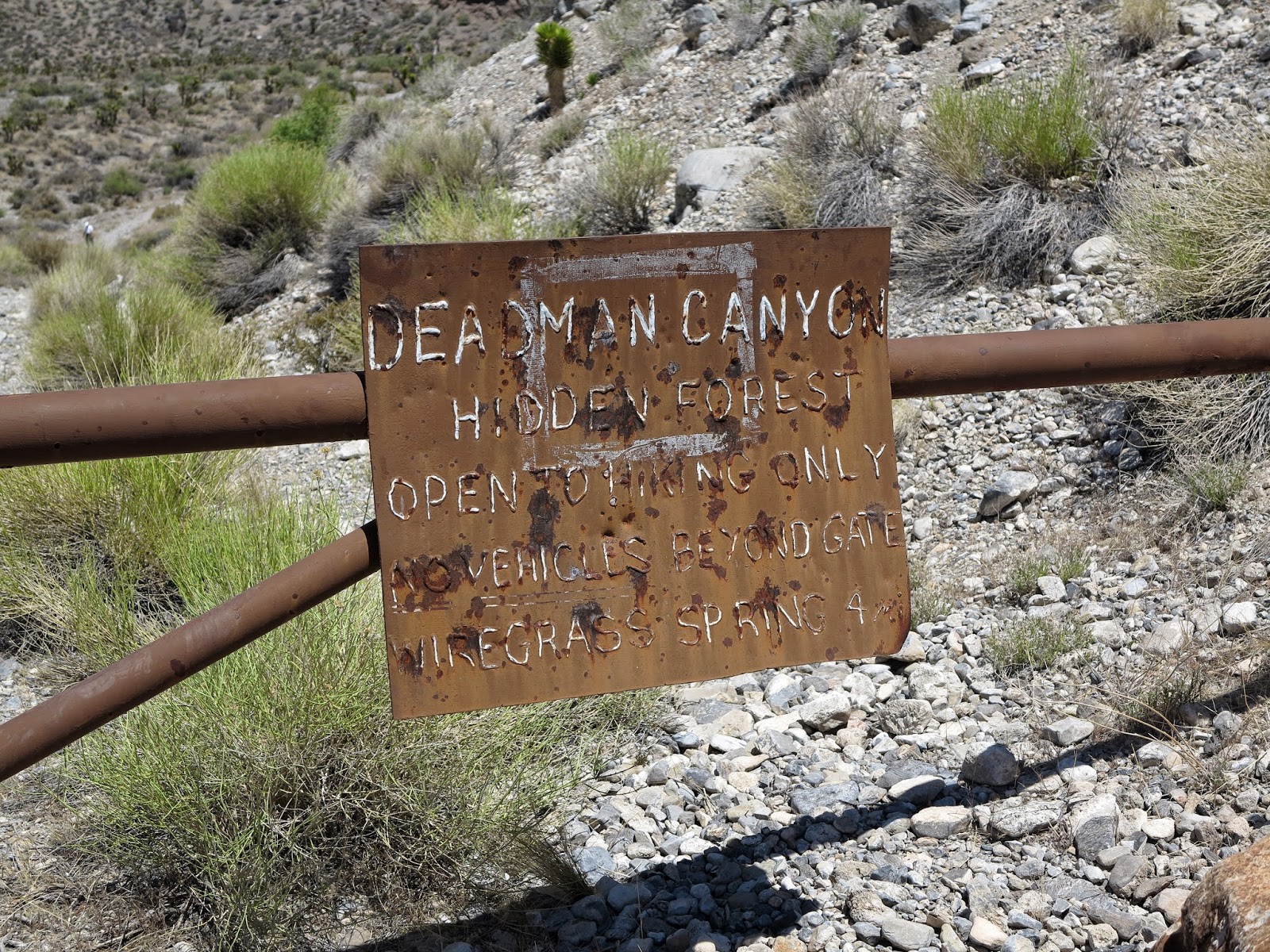 We watched the desert go by outside the car window while the sun drenched the dirt, rocks, cacti and joshua trees. To the east, the mountains were shaded blue. Finally, when we saw the highest peak of the small Sheep Mountain Range named Hayford Peak, we also noticed the canyon at the base of it just before. This was Deadman Canyon which holds the Hidden Forest Trail and ultimately the Hayford Peak Trail. Today, our destination was the old refurbished game warden's cabin resting among a forest of ponderosa pines 5.5 miles up the canyon.

We stepped out of the cars, hiked down the hill into the mouth of the canyon and, immediately, we were greeted by a lovely king snake. Its skin blended well into the rocks of the wash and both the snake and us were quite surprised at our presence!

One of the interesting things about this hike is that the foliage gradually changes from cactus and scrub to pinyon pine and juniper to ponderosa pines. 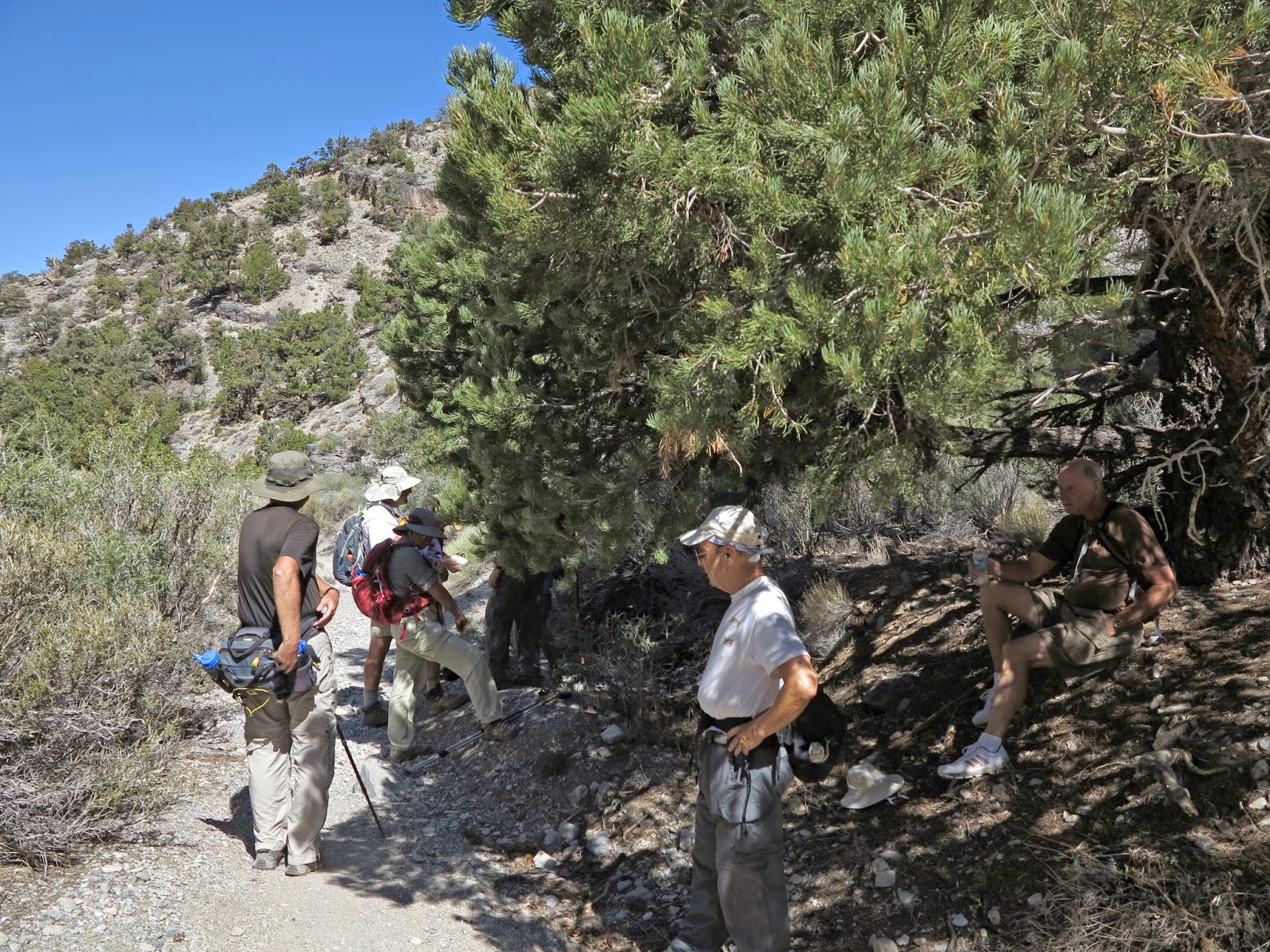 So, we hiked up the gravel wash through the cactus and scrub. Here and there, were joshua trees. Wildflowers were blooming all along the trail. And, the high rock walls on either side of the canyon were forbidding of any exploration. Nevertheless, there were beautiful limestone pinnacles and towers jutting out from the sides of the canyon from beginning to end.

We rested in the shade of one of the first pinyon pines that we came to.

After the joshua trees petered out, the pinyon pines and junipers took over the terrain completely.

Even though the trail continued through the wash, the loose rock was not too difficult to navigate going up. 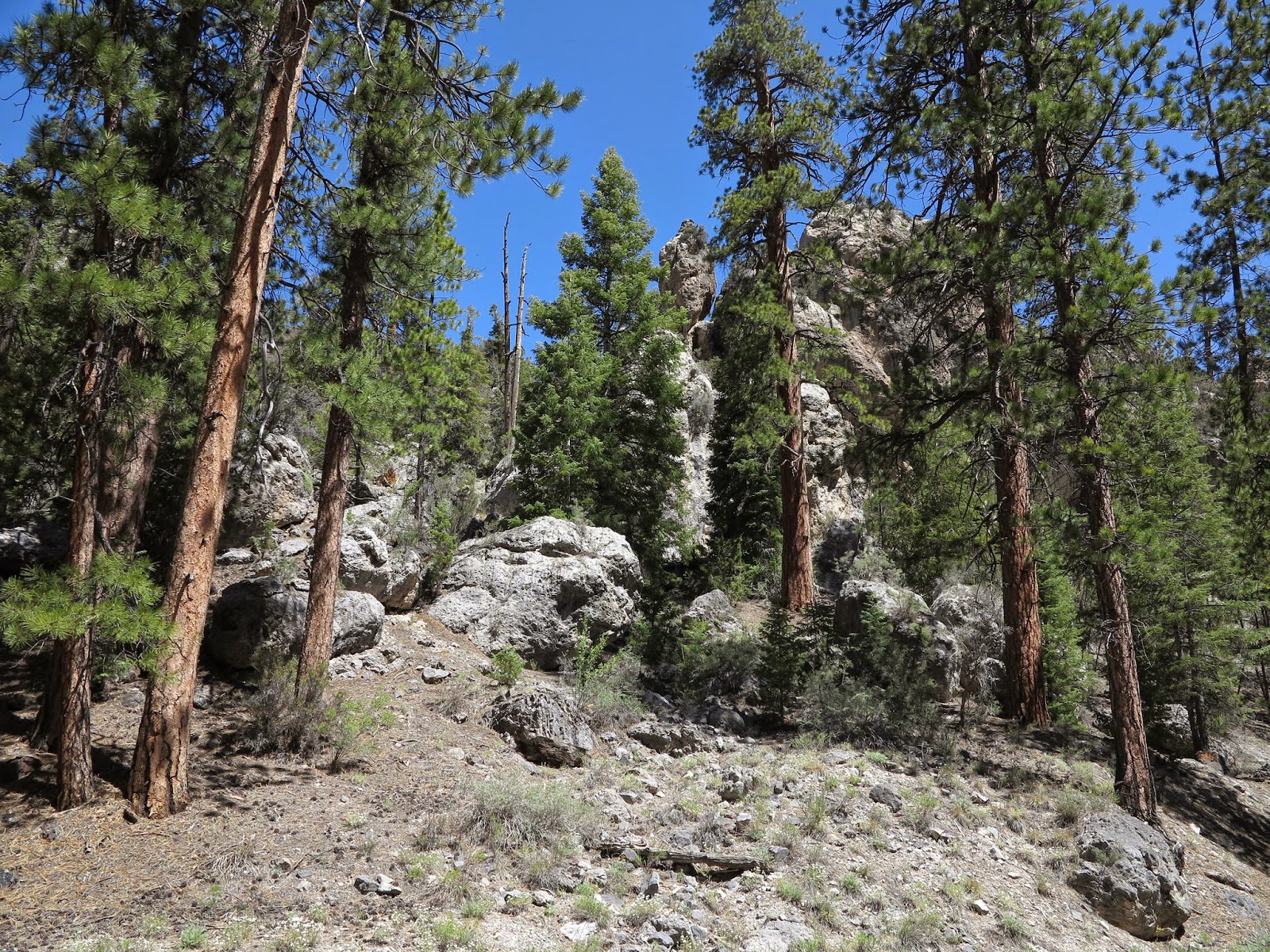 As the walls began closing in, the ponderosa pines began appearing. We had some discussion as to whether we thought their bark smelled more like butterscotch or vanilla. We had passed a couple of hikers on the way up and, now, we were approaching the cabin area. After 5.5 miles, we were ready to take our packs off and take a break. The first point of interest was a small corral on the left side of the trail.

Next, we hiked into the large glade where we found the cabin, picnic tables, fire rings and the piped in spring water that was flowing. 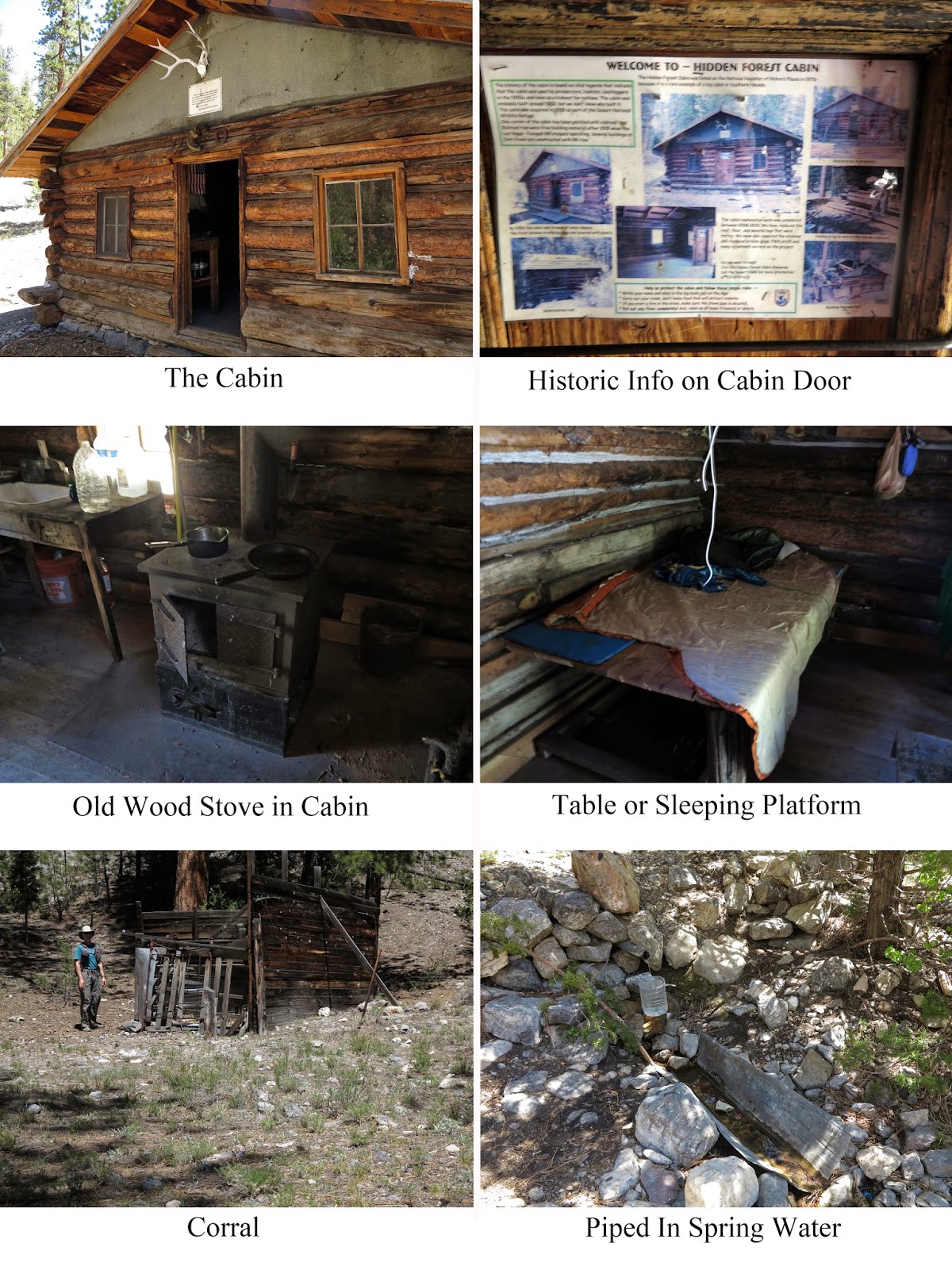 The cabin is believed to have been built in 1931 or 1932. In 1975, the small building was added to the National Register for Historic Places since the old log cabin was unusual for Nevada. 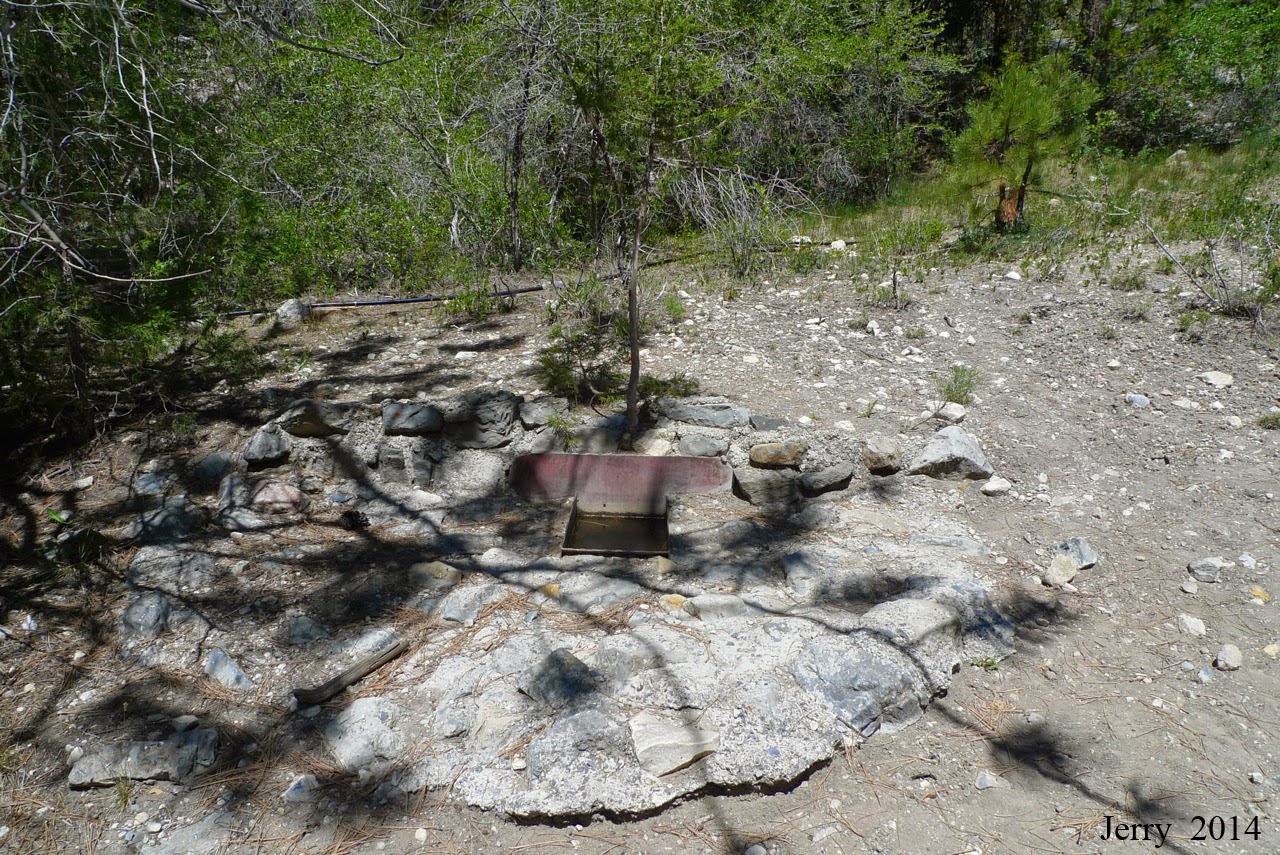 When the cabin was built, cars could be driven into the canyon. This can no longer be done due to floods and landslides over the years. Just 150 elevation feet above the cabin on the Hayford Peak Trail, is Wiregrass Spring. Jerry made the trip up the hill and took the photo seen to the right. We all took our break at the picnic tables and, eventually, the couple that we passed on the way up hiked in. They were going to stay overnight, however, there was already someone staying in the cabin as evidenced by their things inside.

We took a look at the remains of an old 1928 Chevrolet then started back down the trail.

At first, we sauntered while enjoying the coolish air and forest surroundings. After about half a mile, we began speeding up and separating. 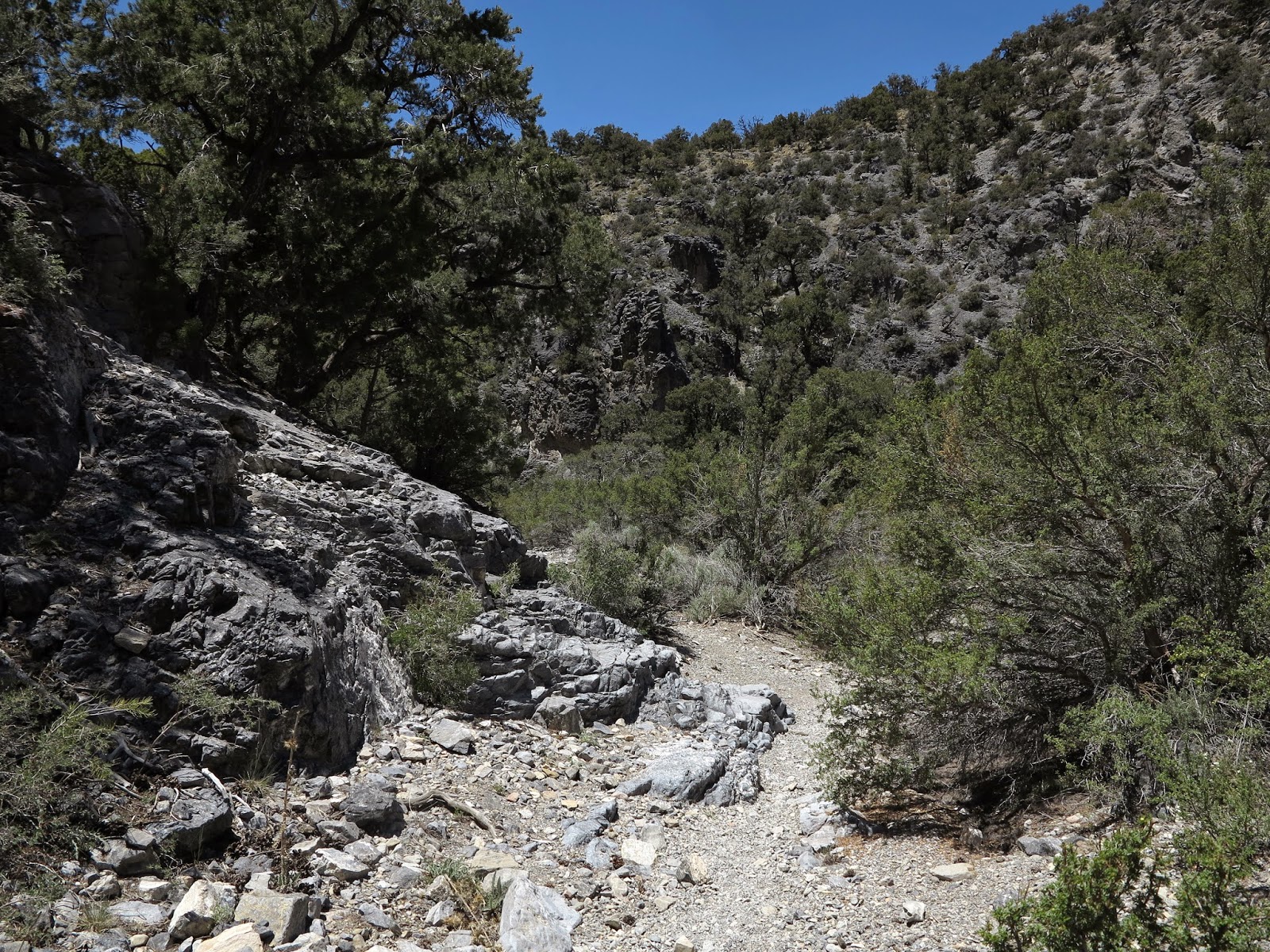 The thought occurred to the writer that the descent through the gravel wash would be a "piece of cake." This was not so. The unevenness of the gravel made the hike down more treacherous on tired legs. Still, we all made it down without problems. The reverie of the solitude was punctuated by the pinnacled walls.
At the cars, the heat had returned. And, then, there was that long drive home. But, Hidden Forest is a hike that will not be set aside easily. It seems to command respect way up there on the north side of the city. 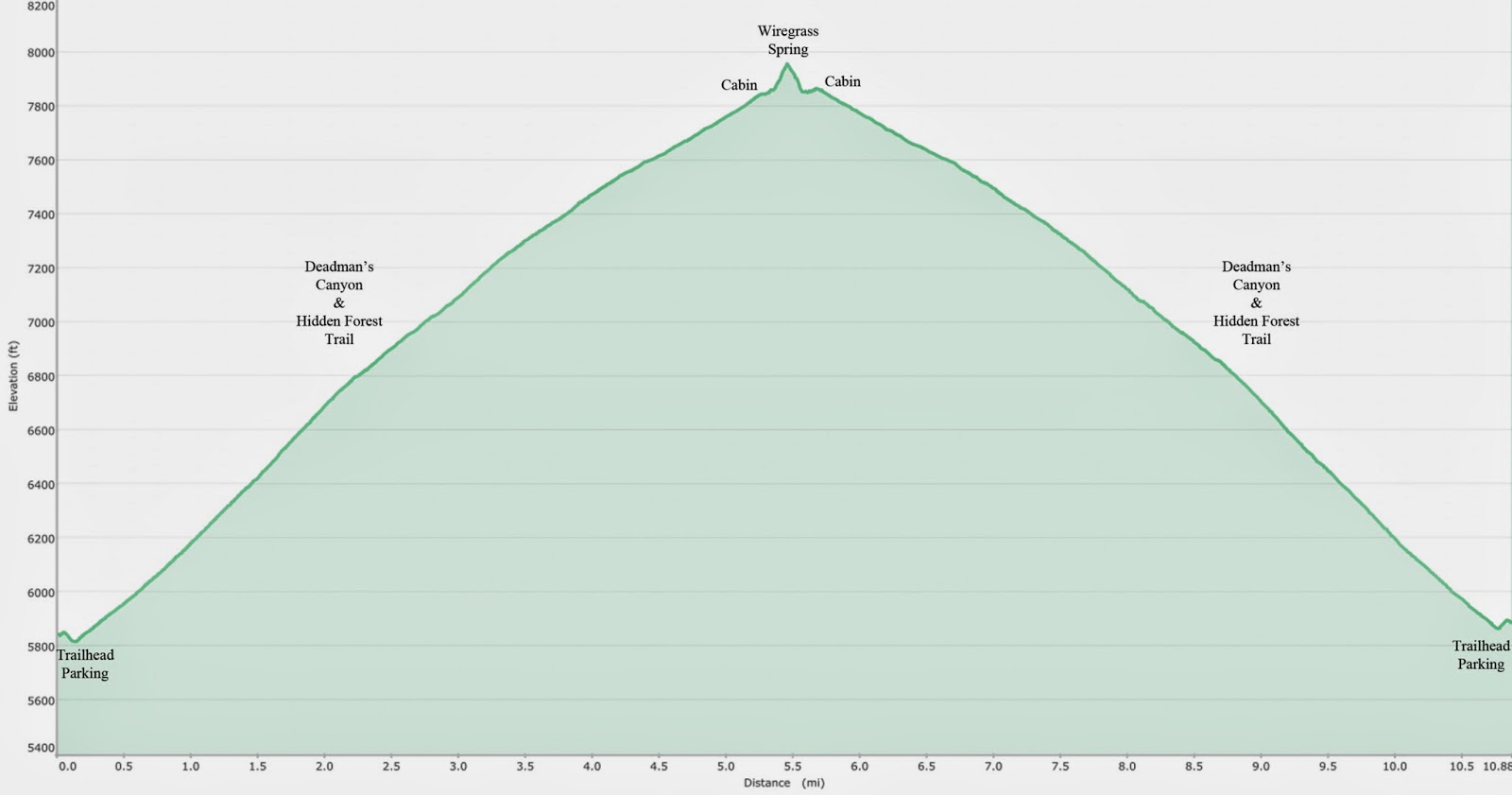 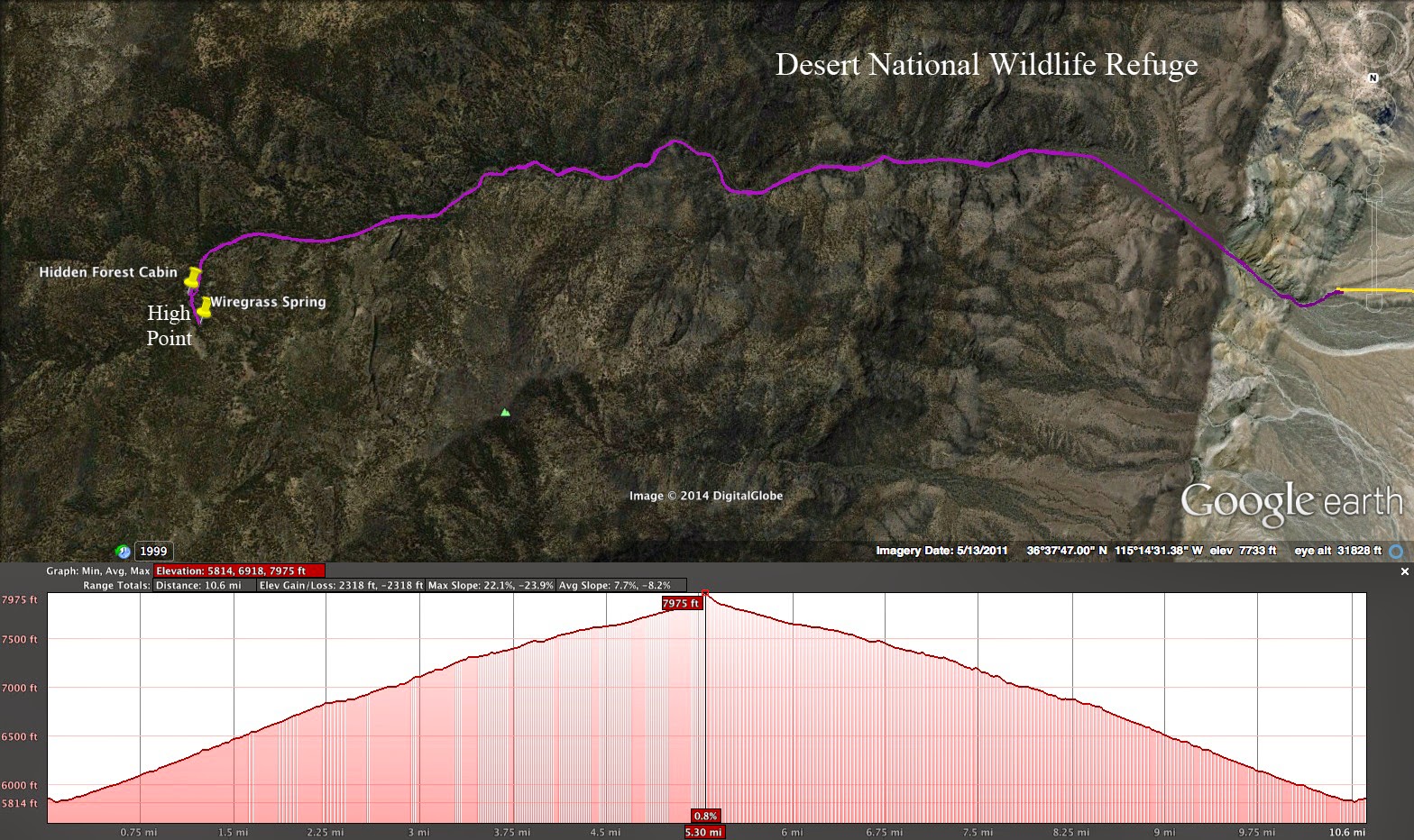 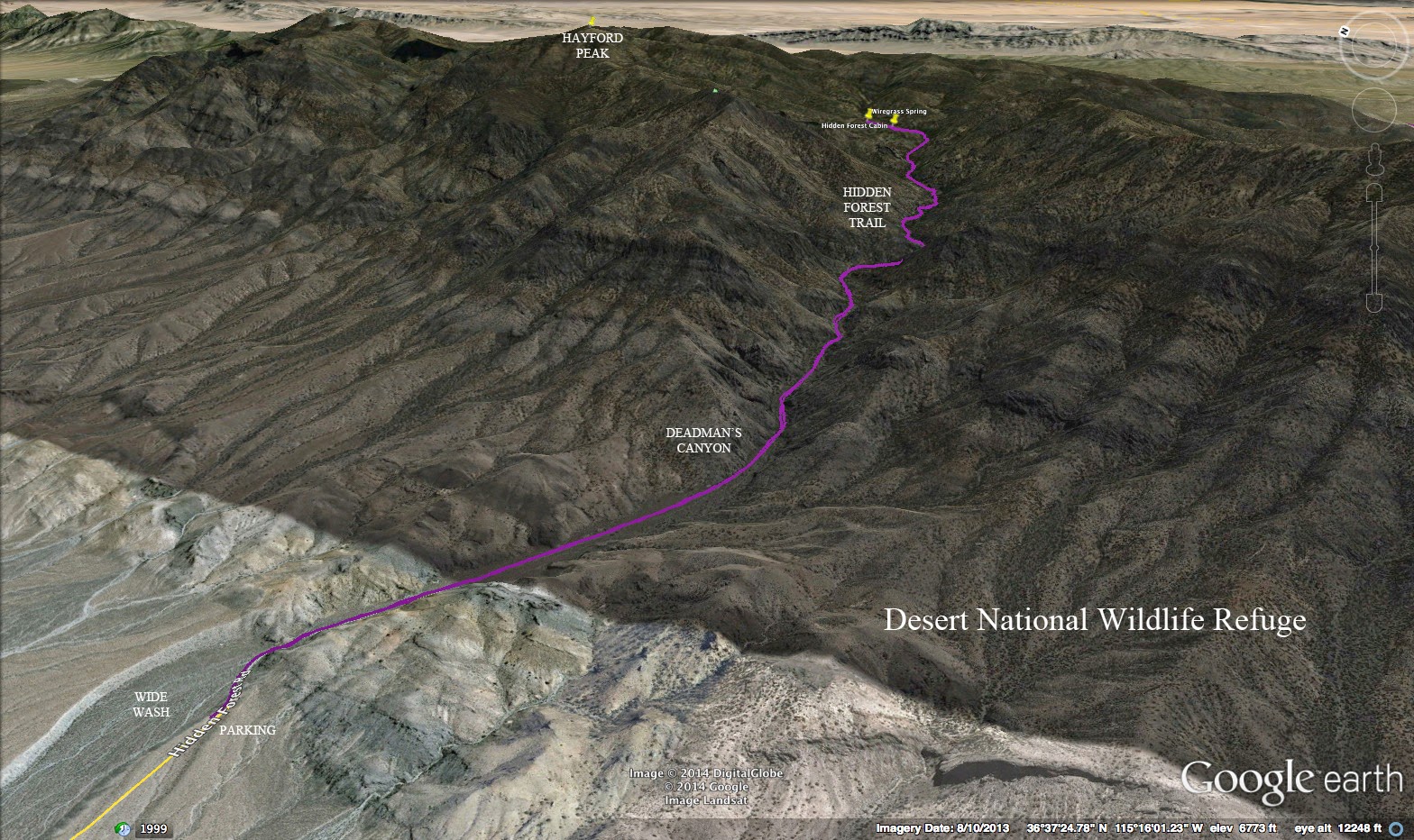 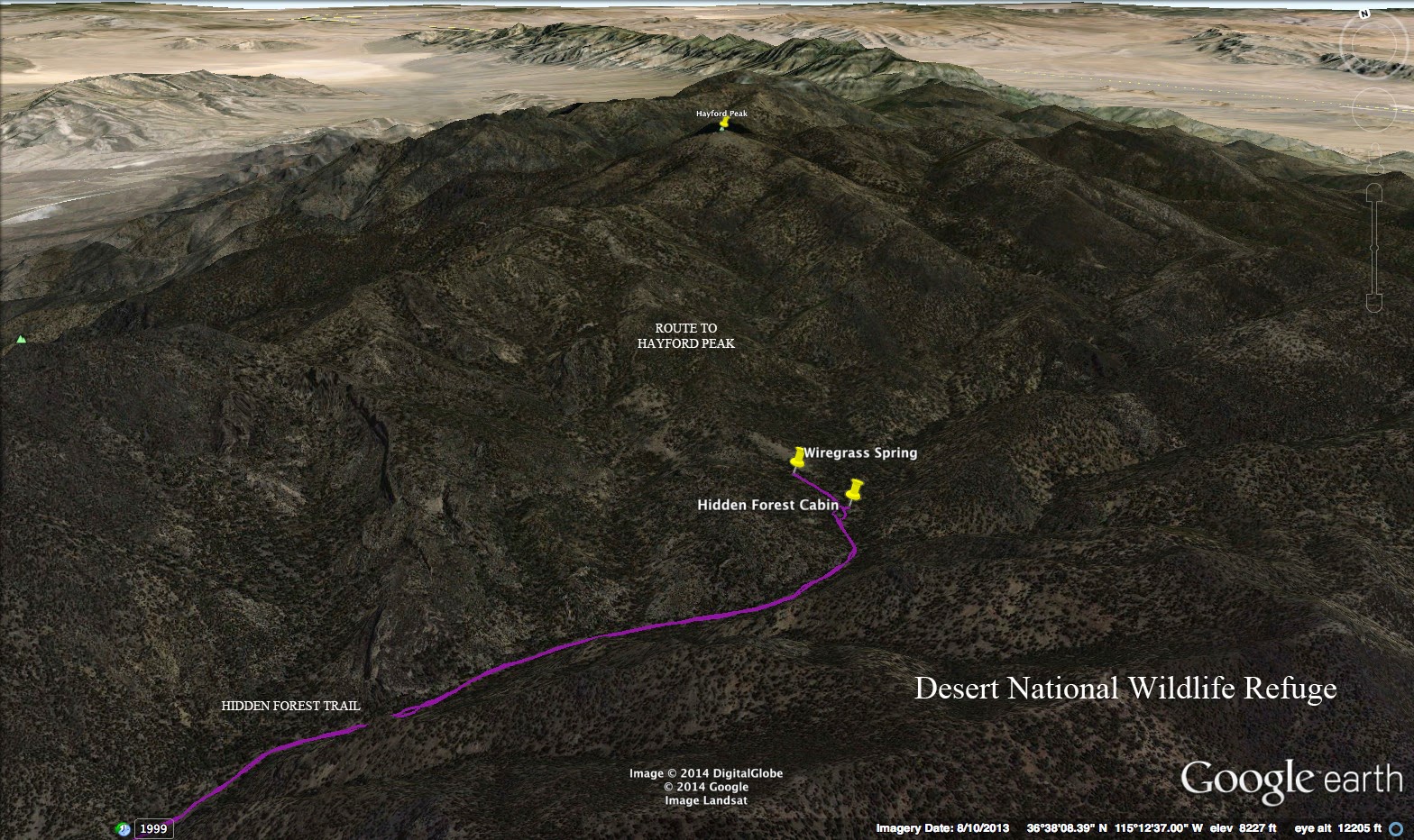 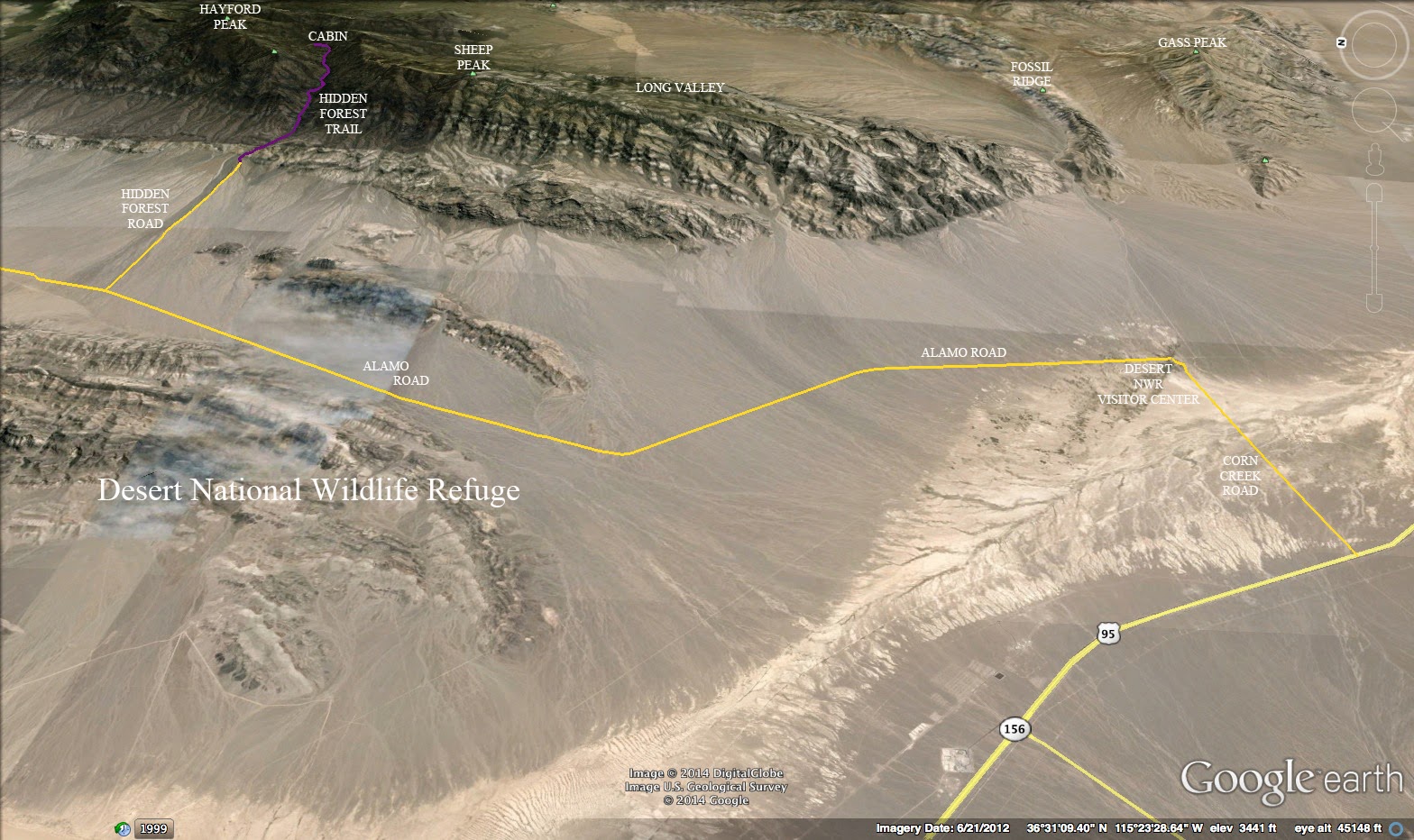