Fern Canyon is the north fork of Pine Creek Canyon where the old Wilson homestead ruins reside in the Red Rock Canyon NCA. The canyon runs up from the fork about a mile. At the top of the canyon, there is a sandstone shear faced wall approximately 1500 feet from the bottom to the overlooking ledge. This ledge, near the limestone / sandstone line of the Keystone Thrust was the destination of today's hike. By taking two tough vehicles with ten hikers inside up Rocky Gap Road (The road is in terrible shape!) out of Willow Springs, we were able to shorten the photogenic hike to five miles.

We parked at the trailhead cairn for the North Peak Sandstone route. It was a cool morning but we were soon warmed by the immediate steep climb of one and a quarter miles. Over this distance, we climbed an ascent ridge through the limestone layer and up onto the sandstone layer. We took a couple of breaks but the morning was young and we were strong. The ascent ridge led us up to the main ridge where Dragon Rock reigns in all its jaggedness.

One by one or two by two, we climbed the last section of sandstone broken slabs called "surf boards."
The sandstone terrain began leveling off as large cairns welcomed us. We gathered at Dragon Rock and took a nice break.


Here, we could see the terrain on the other side of the main ridge. In the photo to the left, the limestone / sandstone line that we would follow can be seen. There is a trail around this rim although, sometimes, it is difficult to decipher as it goes in and out of the sandstone slabs. We dropped down over the ridge and found the trail indicated by cairns. We began circling the first canyon on our left side.

Although we tried to name this canyon, it turned out that it is a short shallow canyon that does not continue down to the scenic loop road below.

We passed this canyon and began seeing Bridge Mountain start to peek out over the terrain. We could see the hole of the bridge on its side clearly and pointed it out to those hikers who have yet to climb the massive challenge.


The next canyon, although we didn't know it at the time, was Ice Box Canyon. This was definitely a very deep canyon with shear walls bathed in the morning shadow. In the distance, the Calico Hills were very colorful and we could also see the Ice Box Canyon trailhead parking lot through the mouth of the canyon. At the time, we thought this was another mysterious rock climbing canyon named Ice Cube Canyon. Since, it is, in fact, Ice Box, then perhaps the third canyon is the Cube.

When the trail dropped permanently down into the sandstone, the trail could only be followed using the sparse cairns. But, logically, the trail simply follows the rim of the three canyon sources.

A small arch beckoned us up to a high point above our destination. Once we were there, we could see the Bridge Mountain Trail coming in from the right and the Fern Canyon Overlook below us.


The group arrived at the overlook and oohing and ahhing ensued. We had two hikers who were new to this place. The rest of us were reminded of how beautiful this area is. Fern Canyon stretched out 1500 feet below us and Bridge Mountain rose over to our left. Mescalito Peak sat at the end of its bench on the south side of Fern Canyon. All around us were colors; reds, yellows, greens and blues. Some hikers sat on the ledge and dangled there feet in the mid air while we all took our snack break.

Nearby, there is a cantilever rock over a crack at the top of the canyon. It is advised to not take a misstep!

We took many photos and resisted saying to our subjects, "Can you back up just a little?"


After the break, we started back along the same route we took to get there ... more or less. There were less shadows in Ice Box Canyon and there was a distant view of North Peak Sandstone (seen in the photo to the right) as we hiked around the rim in the other direction. We were also introduced to Gorilla Rock who seemed to be winking at us as we passed. The easy terrain brought us back to Dragon Rock and we took another break.

Next, well, ... that trail down is very difficult to find sometimes! There are cairns everywhere which doesn't help. Nevertheless, with two geocachers extraordinaire in our midst, getting lost was the last thing on our minds! We eventually found the trail and continued our steep dive back to the road. Fantastic hike! Loved the views! 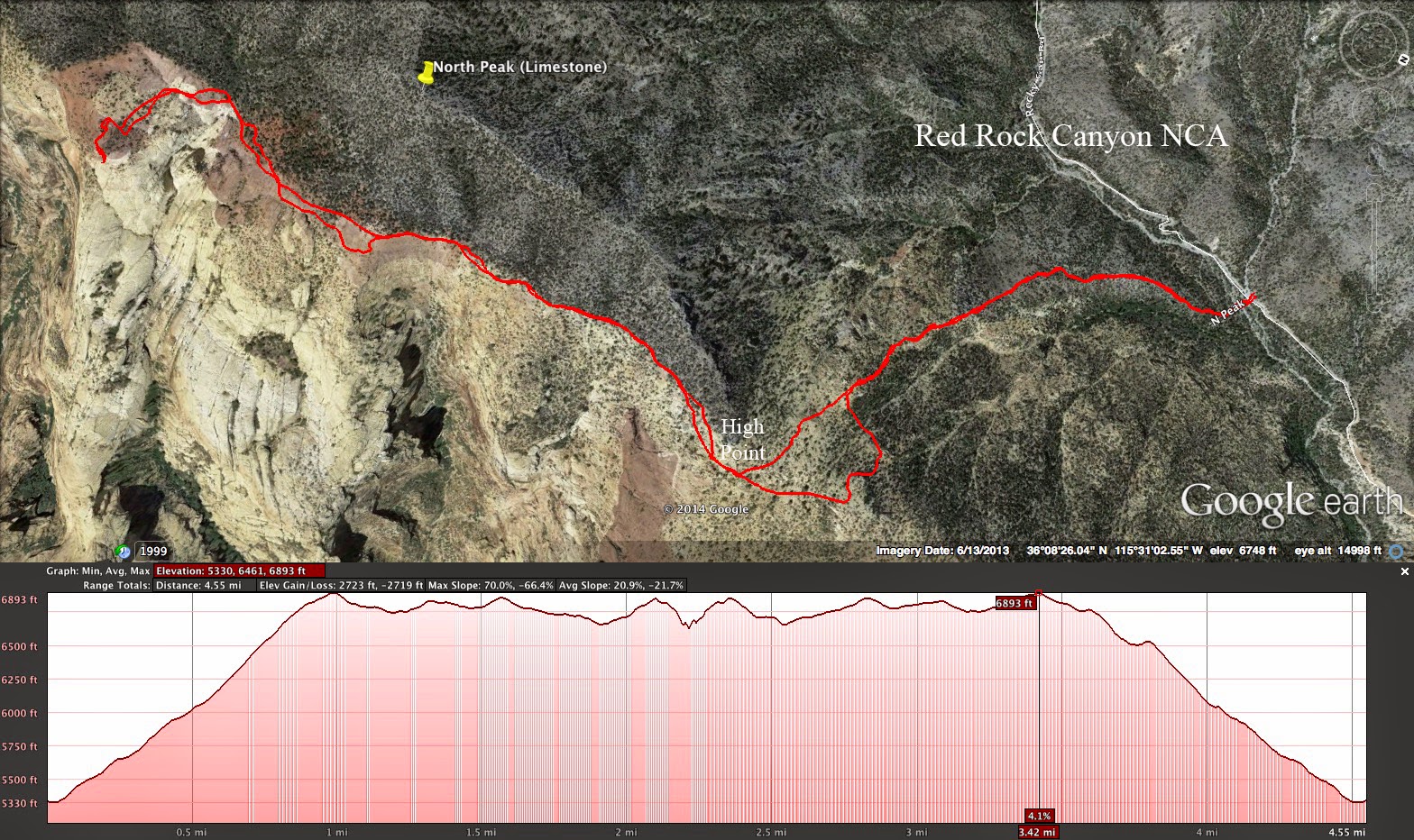 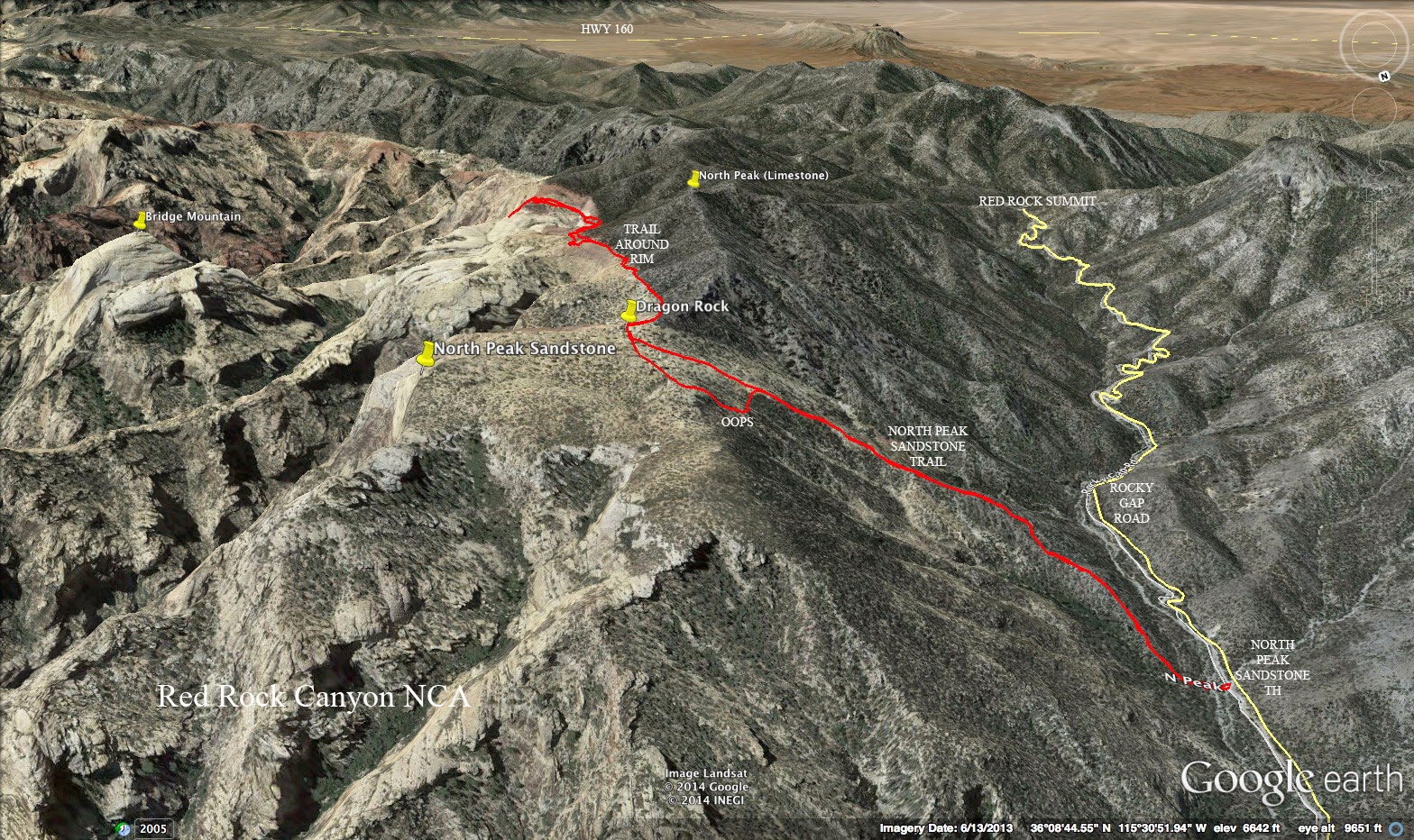 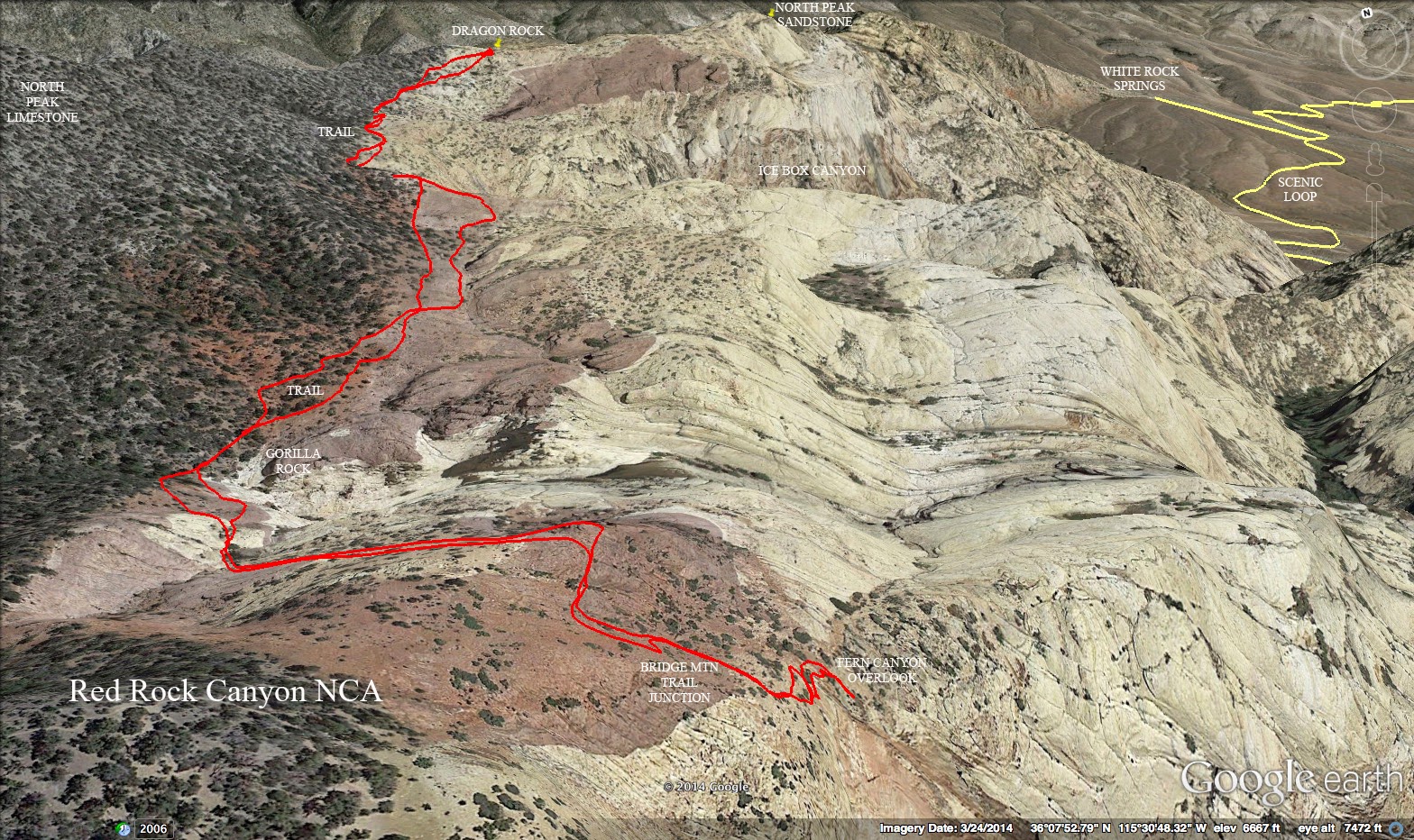 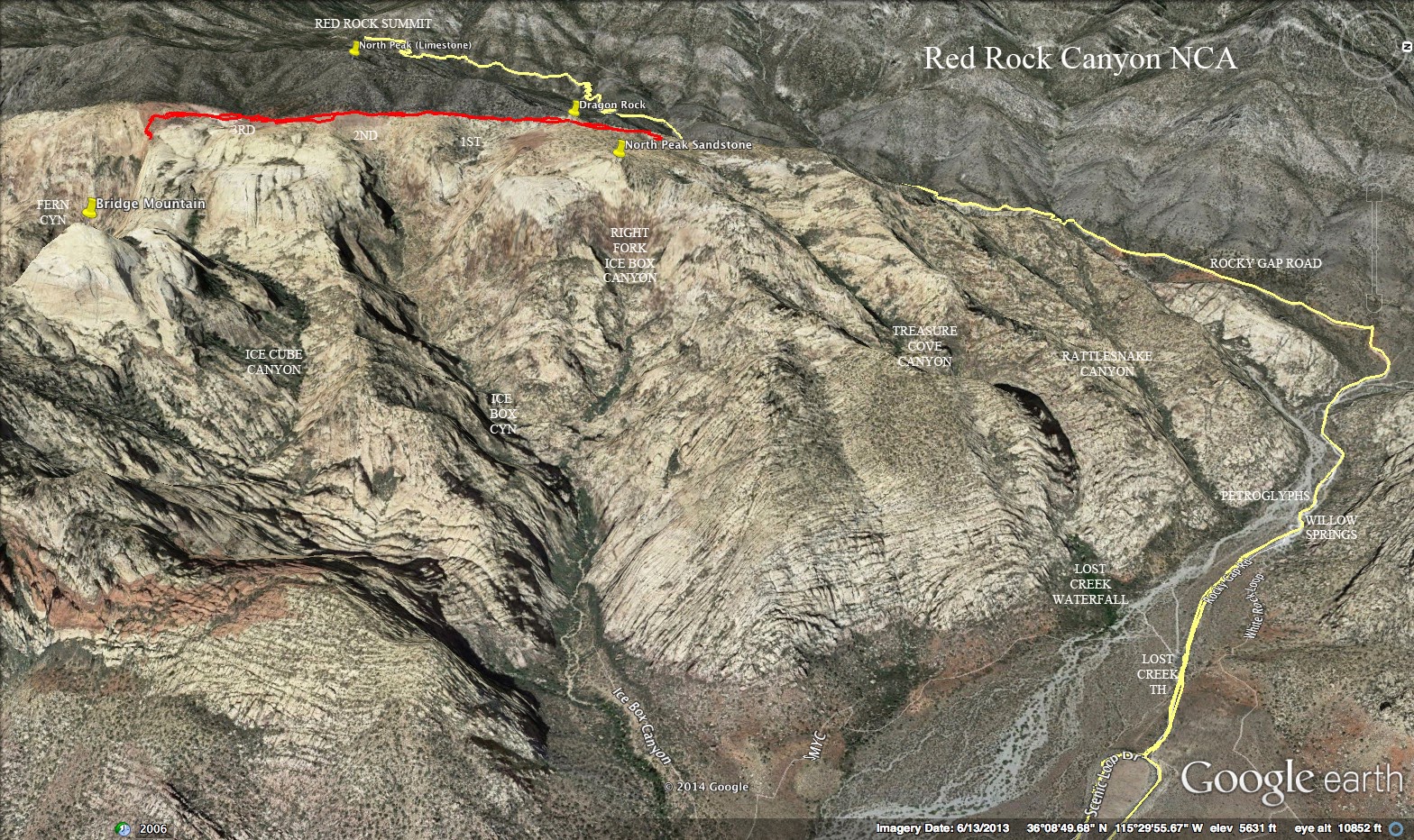