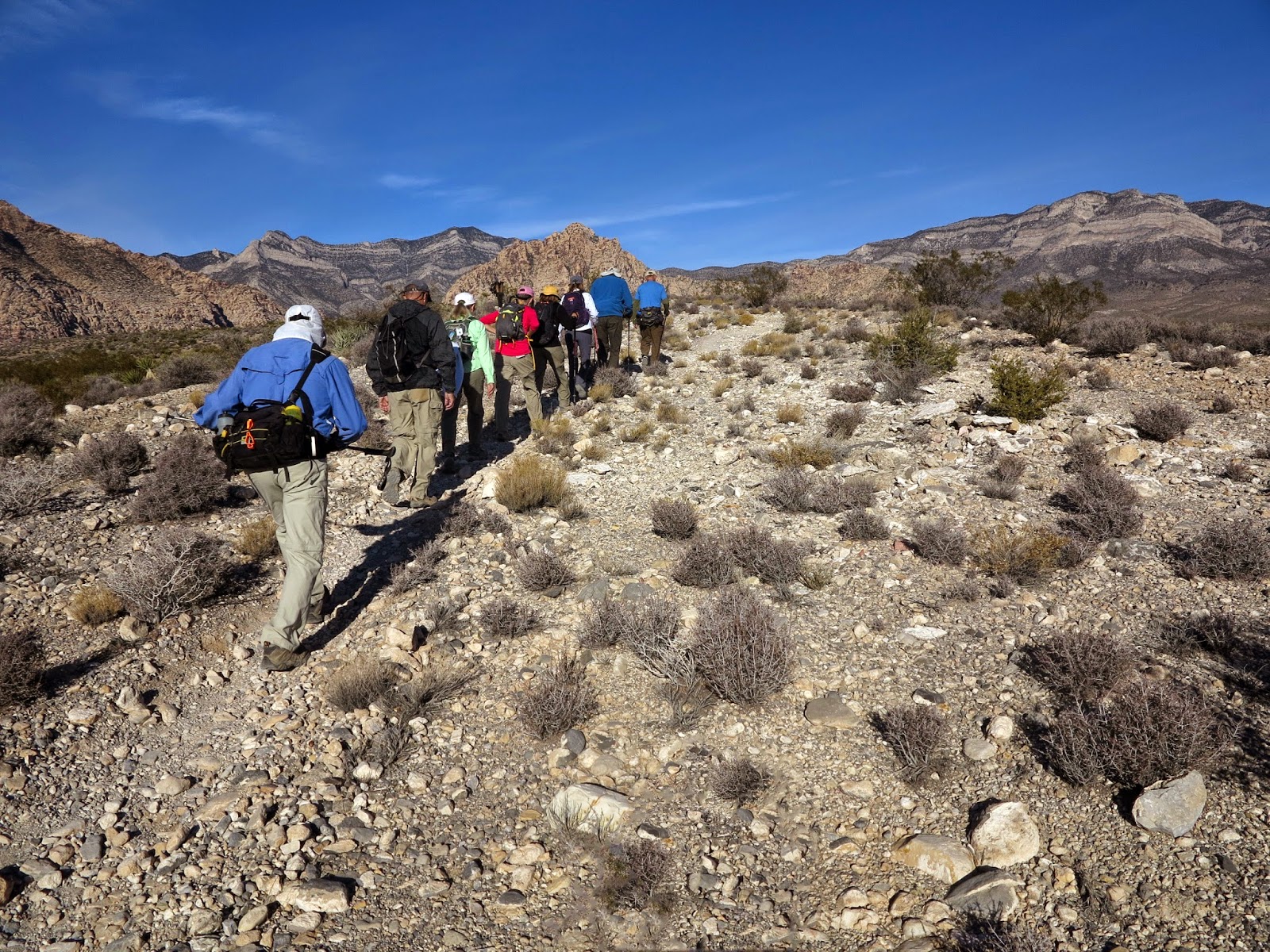 It was a wee bit chilly for nine hikers as we started out from the Red Rock Canyon NCA fee booth parking lot for a twelve mile hike around the Grand Circle Trail. However, the chill didn't last long as our exercise and the rising sun warmed us. The first six miles of the hike uses part of a very old dirt road that connected Rocky Gap Road and Pahrump to Las Vegas. At the time, this was the only way there was to take a vehicle over Red Rock Summit. We started out at a brisk pace that would be adhered to for most of the hike.


The long climb up the old road led us toward Willow Springs, crossed the Scenic Loop then connected with the White Rock Hills Loop where we turned right. The climb continued up to the White Rock Springs Trailhead. 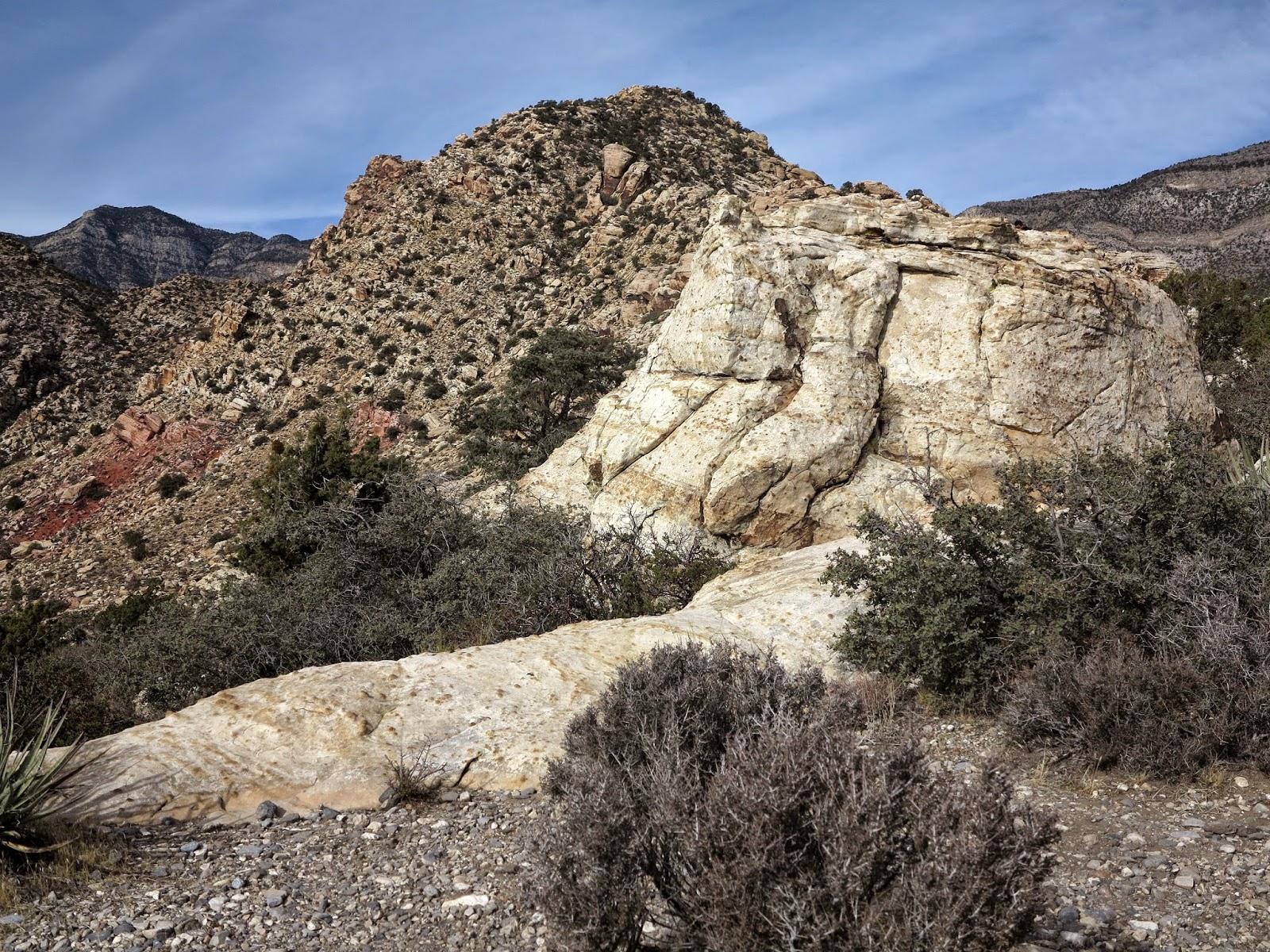 The last of the climb took all we had remaining in energy as the pace floated around 2.75 mph. The longish break that we took here was well deserved! We sat on the rocks and enjoyed a snack as the cold wind kicked up a notch.

Next, we started the descent by hiking down the dirt road that led to the trailhead. The three miles that followed would take us across the top end of the canyon floor as we climbed and dropped through a series of undulating hills. Two more Scenic Loop crossings were within these three miles.

It was a busy day at Red Rock and we stopped cars at three of the four road crossings. The crosswalks have recently been repainted. 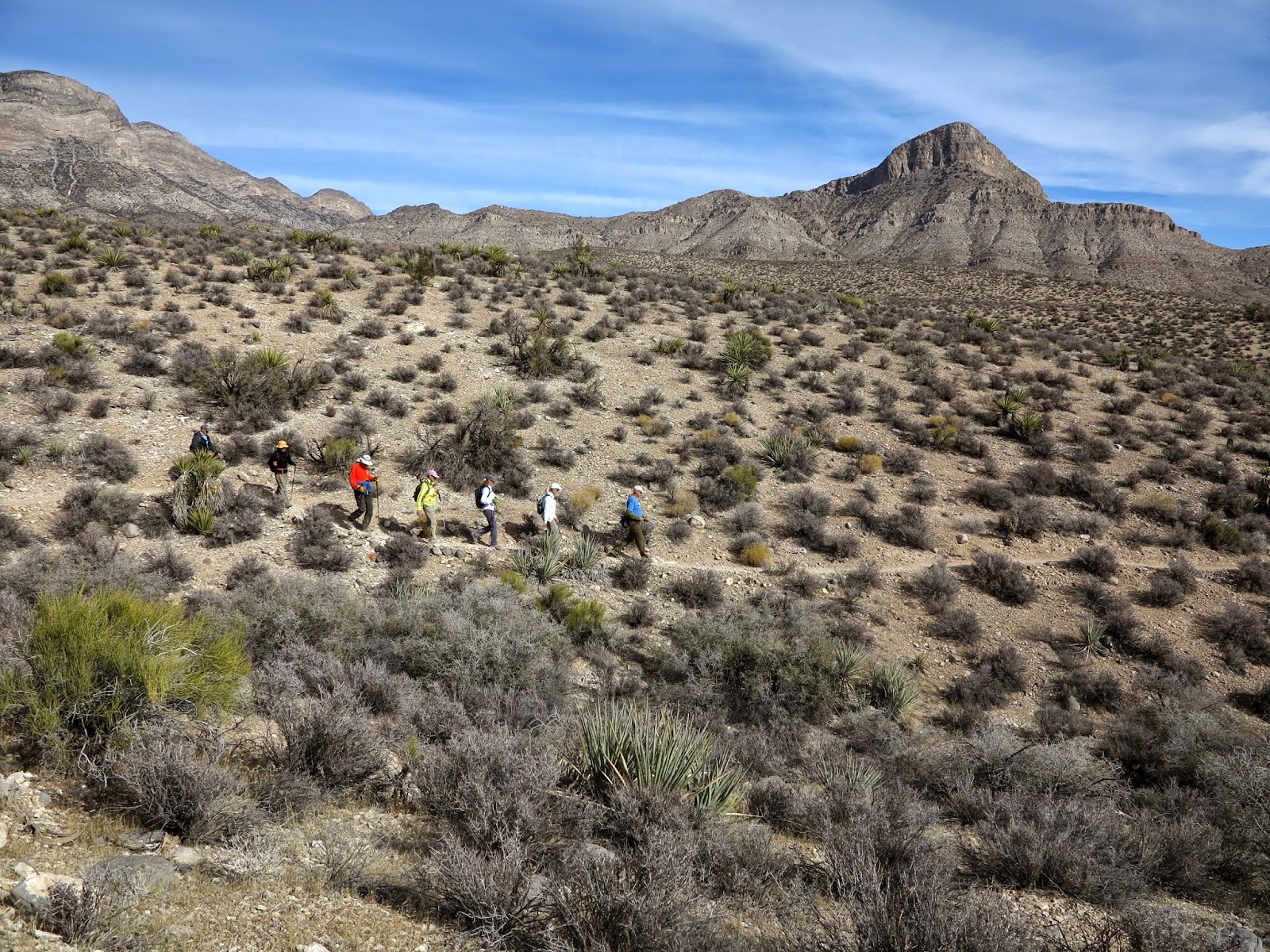 As we zigzagged our way over the hills, we ran into another club hiker. Not reaching the meeting place on time, he had decided to hike the loop in the other direction knowing that, eventually, he would run into us. So, then we were ten.

We had wonderful views of Turtlehead Peak and distant views of the Calico Hills. We could see the Visitor Center some distance away. And, the escarpment rose behind us.

When we hiked into the Sandstone Quarry parking lot, the place was packed! People and cars everywhere! 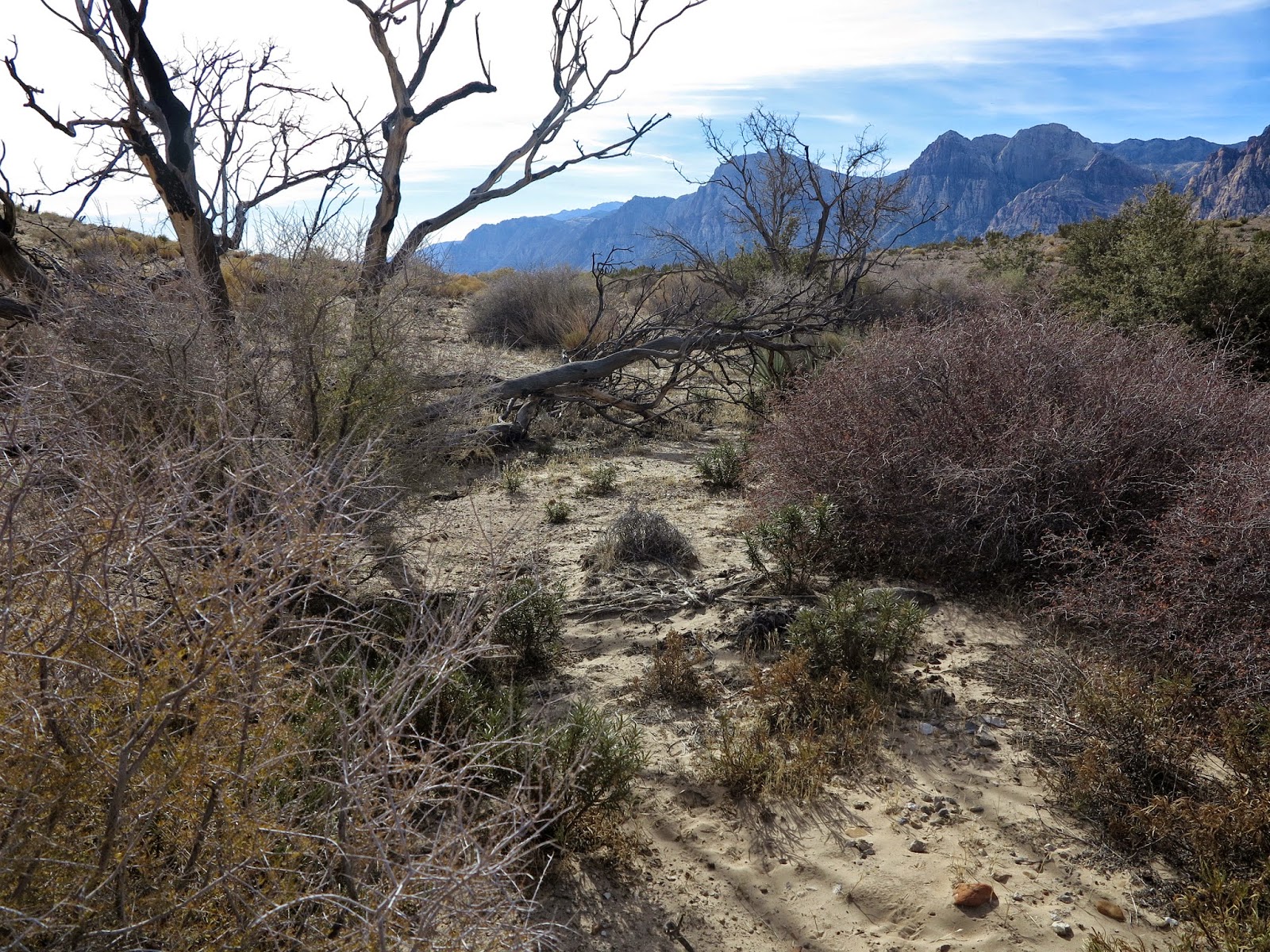 We took a small break here then proceeded hiking down along the red sandstone toward Calico II. The trek down beside the colorful sandstone would be the last three miles of the Grand Circle loop. Here the trail undulates in a different fashion. We made short climbs up and down over the sandstone on the path with uneven footing. Tired legs and feet had to be careful during this stretch. One misstep and ... well ....

This was also, perhaps, the most beautiful part of the twelve miles. After seeing muted colors of gray and green for the first nine miles, the red sandstone seemed really bright! 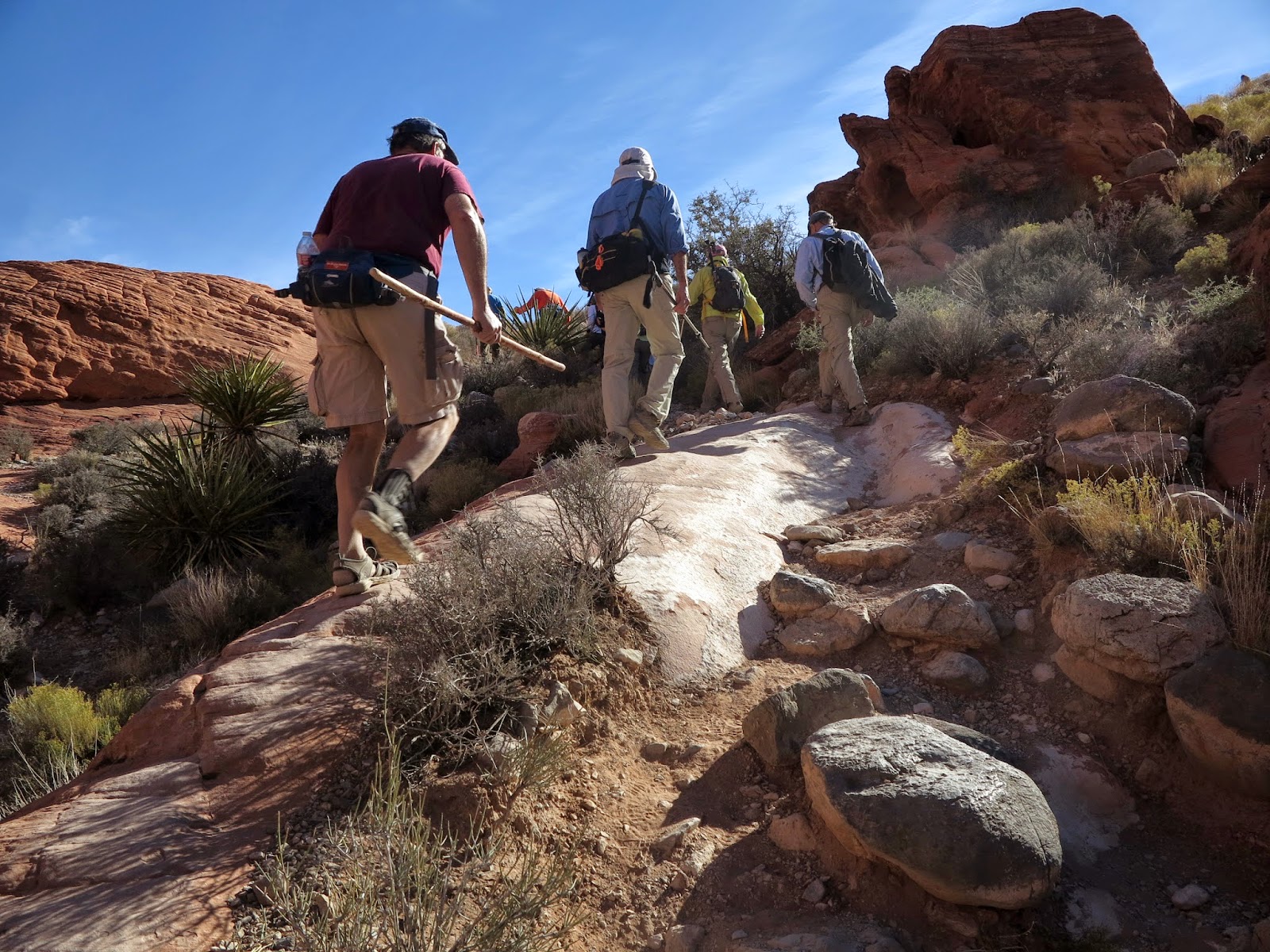 As we continued down passing Calico II and nearing Calico I, we saw more and more people on the trail. All types of people passed by. It was especially nice to see little kids with their adults enjoying an adventurous hike at Red Rock. Finally, we reached Calico I and did the last mile down to the fee booth parking lot where we had begun earlier in the morning. It's a long trek but, at the same time, very satisfying. 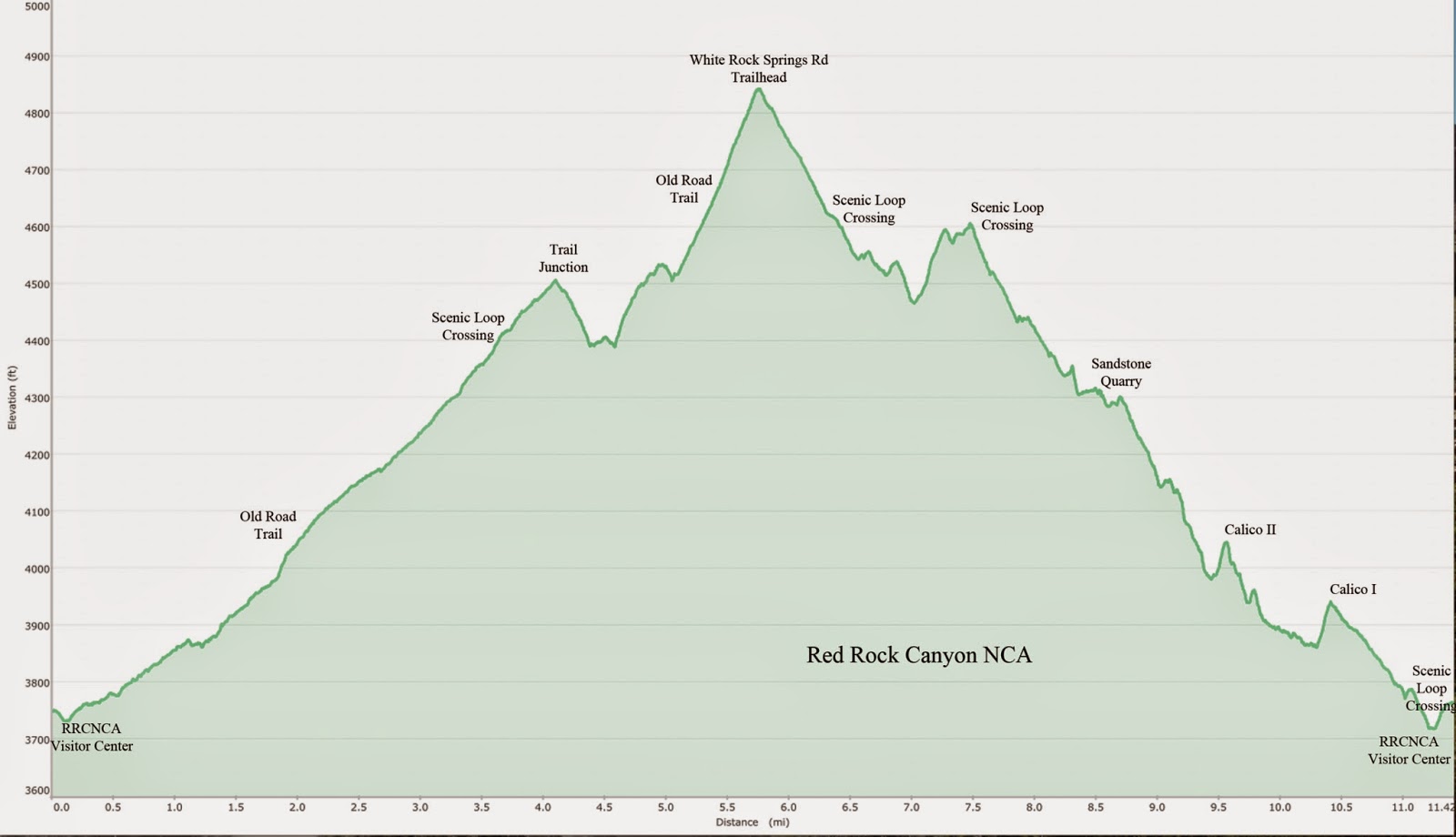 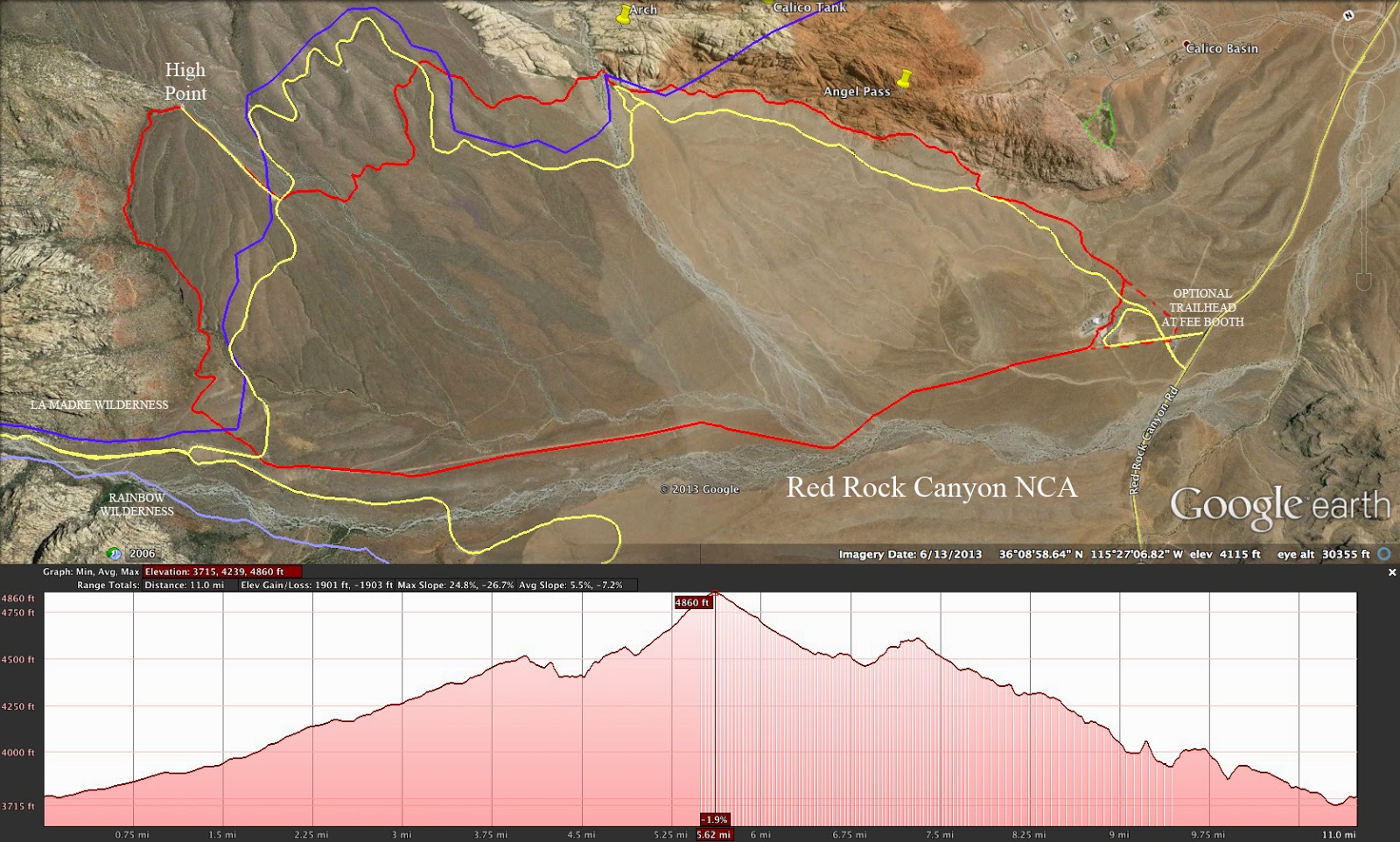 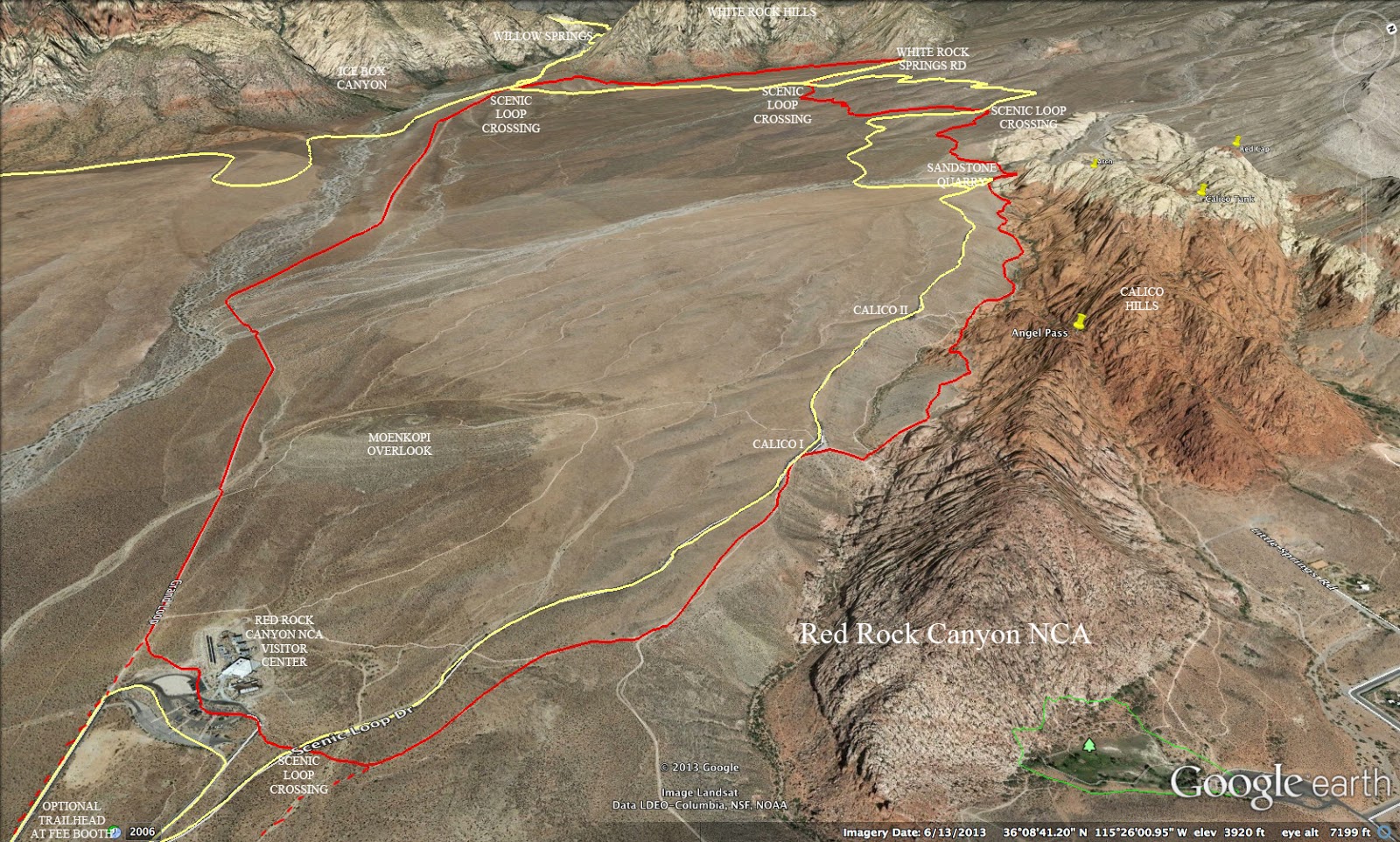 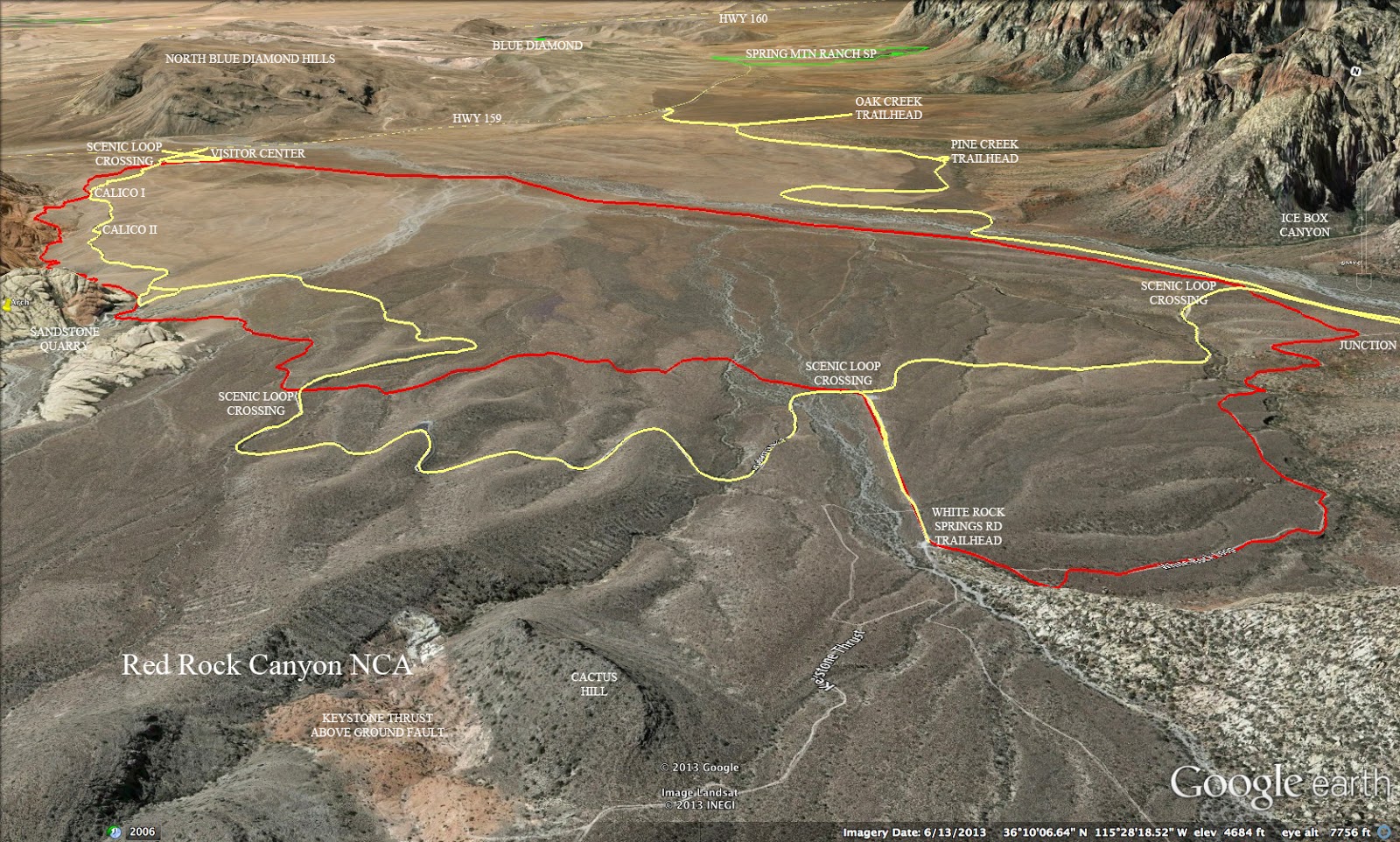