Fifteen hikers arrived at the Sandstone Quarry parking lot at Red Rock Canyon NCA today itching for a good old fashioned scramble. With Tony at the helm, they were not disappointed! We started out the Calico Tanks Trail and took the left turn into the wash around the corner. There are many ways to get over to the Rattlesnake Trail from there and we were shown a new one today! Fresh!


We grabbed a ride on the Rattlesnake Trail over to the base of Red Cap where we turned to go up on our right side. This is the backside route up to the small red peak above. It is steep and we checked our shoe traction as we climbed. We were led expertly up as we zigzagged through the cracks of sandstone. Soon, we were standing at a very dry Wall Tank. Turning to the left, we took the passage over to the Sundial Tank.

The Sundial Tank was also very dry and had grass growing in it. We enjoyed the rare opportunity to hike right through the middle of it.

Next, we proceeded to exit through the large tank below. It, too was completely dry but that's not so unusual for this tank. We carefully did the slide down and hiked through the tall weeds growing from the tank bottom.


Next, we climbed up the other end of the tank and started our descent down by way of Mass Production Wall. We took it slow as we knew that many of the boulders here are loose. Several years ago, a large rock was dislodged as the group descended and hit a hiker on the head. Today, however, when we found a large loose rock, we neutralized it before anyone got hurt. At the bottom of the wall, we junctioned with the Calico Tanks Trail again.

After waiting for everyone to get down the wall, we began our climb up the steps of the tanks trail.


At the end of the trail where the main Calico Tank came into view, we turned to go up the hill on our right. There is a great view of the city from the slab here but there is also a nice crack to climb which will get you up to the peak above. One by one, all fifteen hikers negotiated the first few steps of the crack in their own way then proceeded to climb their way up to the interesting sandstone formations and tanks above.

One of the tanks up here had some water in it. We scrambled up to the top of Calico Peak by three different ways and signed the log book that was placed here last year.

In the distance, we could see Red Cap and Turtlehead Peak in one direction; the Red Rock Canyon escarpment and scenic loop drive in another direction; the southern Calico Hills in a third direction; and, finally, the Gray Cap / Krafft Mountain area in a fourth direction.


Our next form of entertainment was in the form of an interesting 12 foot sandstone wall climb. Since none of us had ever gone this way, we named it Tony's Wall. He took us down to the wall and most of us accepted the challenge. (Three other hikers decided to go another known way.) After getting to the top of the wall, Tony declared us "Tony's Wall Certified!" Thrilling!

From there, we followed the beautiful sandstone ridge all the way down to the Calico Tanks Trail one more time.


Tony waited for the 3 separate hikers and we all followed the tanks trail back to the cars by using the high route around the "beach." This route was a fun way to put together a few known routes and a couple of unknown routes. We always love a good old fashioned moderately strenuous scramble! 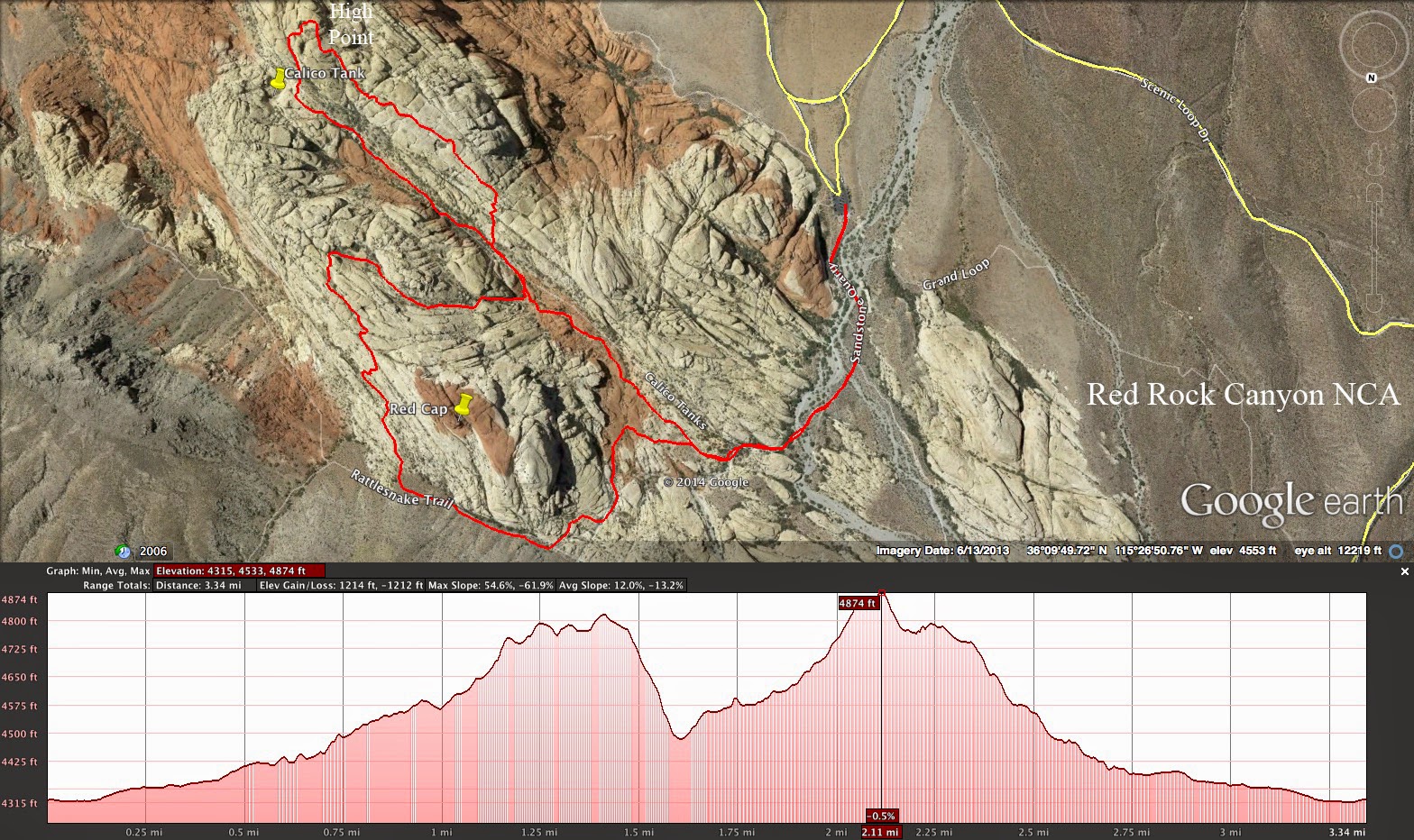 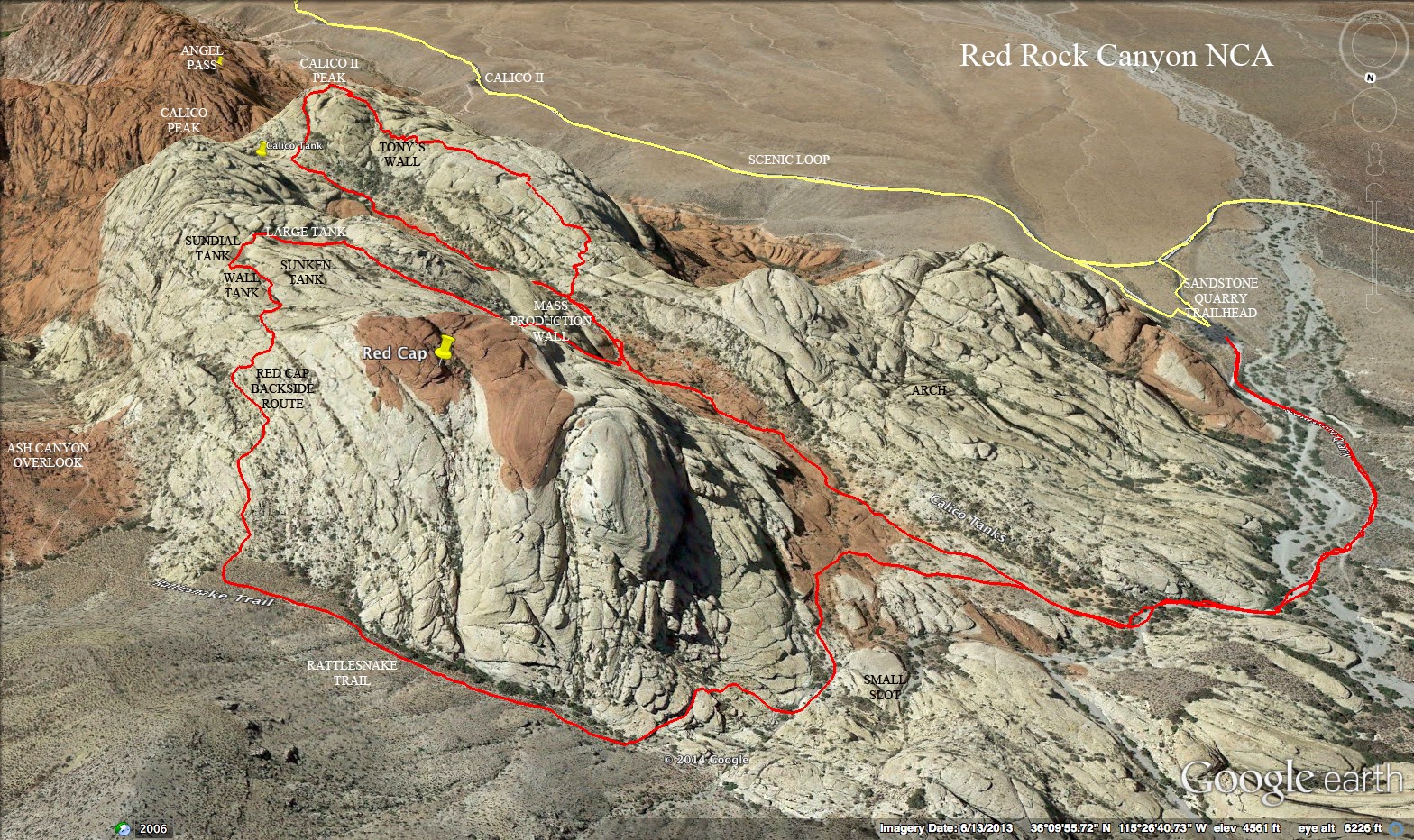 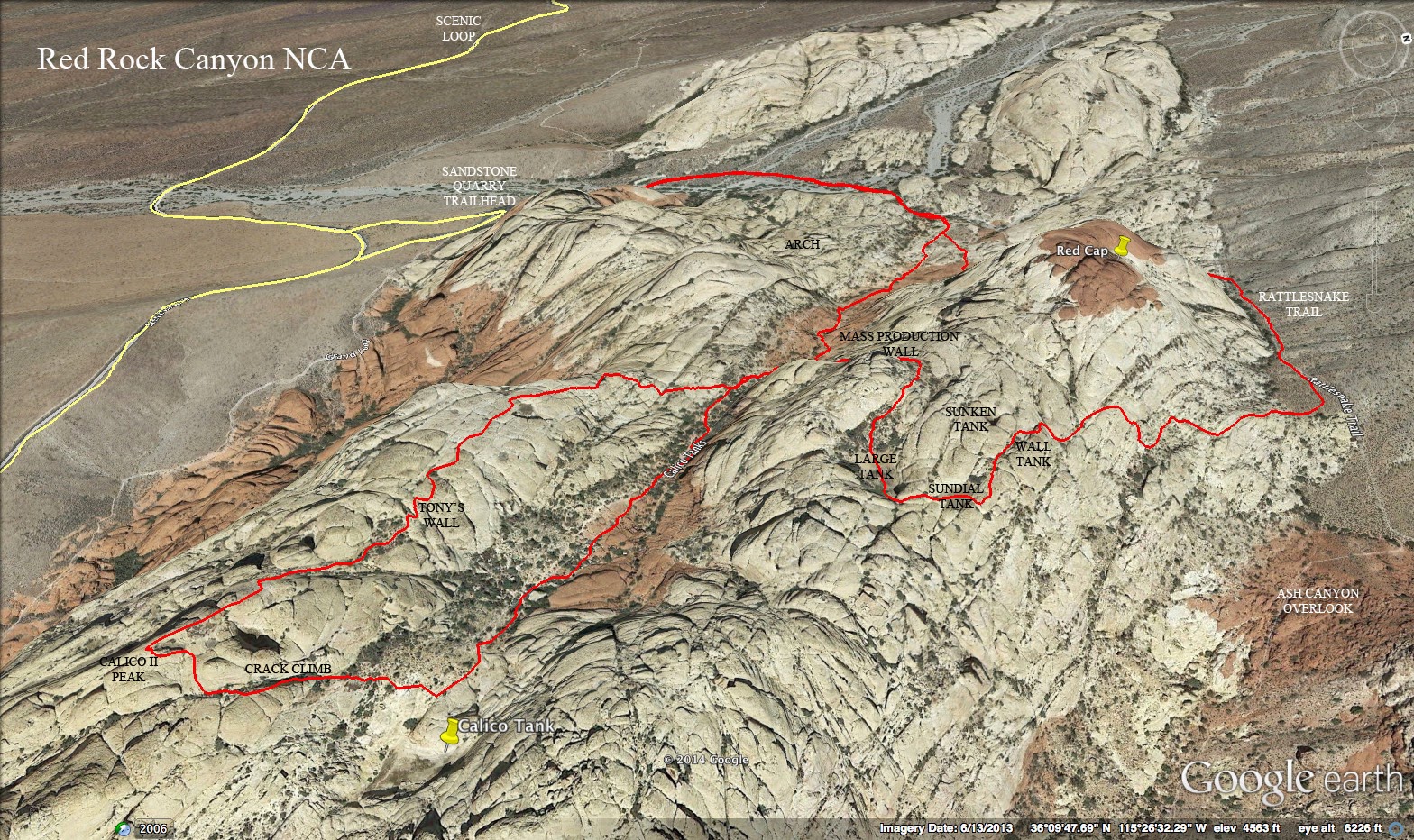