The hikers of the easy to moderate group have "walked" under the radar for the last six months. Not to be underestimated, these hikers are nice people and enthusiastic about their newfound hobby. Eighteen hikers joined Ron and Sandi on Tuesday for a 4 mile hike starting out of Sandstone Quarry. Ron and Sandi have a special gift for ushering the easy and easy to moderate hikers around some of the beautiful and interesting places in the Las Vegas area. Tuesday was no exception and I joined in on the fun. We left the quarry and headed up the Calico Tanks Trail. Soon, Ron pointed out the agave roasting pit off to the left.

Next, he pointed out the trail marker that was buried 3 feet in the gravel after a flood that happened back in the spring of 2014.

We rounded a corner through the sandstone walls and turned left onto the Rattlesnake Trail. This trail was re-routed from a previous trail that led behind the walls of the northern part of the Calico Hills. 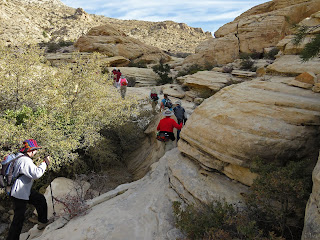 Now the route crosses through a beautiful area of white and cream sandstone with a minimal amount of scrambling. The large group handled the easy scrambling with aplomb. Ron stopped several times making sure that everyone was doing well. Then we connected with the old Rattlesnake Trail route at the other side of the sandstone. This follows along the wall of sandstone above which holds the little peak of Red Cap; a cap of red sandstone on top of the white and cream colored sandstone that we were hiking through. The trail's high point is right at the base of Red Cap where there is a large rock outcropping that is good for an overlook.

After a pause, Ron led the group on down the trail that began dropping to the top saddle of Ash Canyon.

Ash Canyon is filled with colorful red and white sandstone and the view is tremendous! There are a few routes that use Ash Canyon as a thoroughfare but, sometimes, it is good just to sit and look.


We gathered on the rocks at the top of the canyon and enjoyed the surroundings. It was a beautiful day and there was no rush. Conversations were reminiscent of earlier days of my hiking when everything was new and untethered. Eventually, Ron called the 2 minute warning and we got ready to leave back the way we came. It was a good hill to climb back up to the Red Cap Base corner. After we rested at the top, we continued to retrace our steps on the Rattlesnake Trail. Soon, we passed the point where we had entered the old trail. We continued along the old trail on the northern side of the sandstone.

The views of the Red Rock Sandstone Bluffs escarpment were sweeping; unlike any views anywhere else. The light would be best in the morning for photos.


The trail becomes a little vague but it is still easy to follow as it crosses a wash and leads along the base of Turtlehead Peak's trailing ridges.


Eventually, we came to an opening in the white sandstone on the left side of the trail. We entered an area that, with a little imagination, might have been a gathering place for the Early Paiutes, the Basket Makers that occupied this area back in the 1100's to 1200's. More recently, this area was marked by ancient tribes with petroglyphs that depicted the Mormon settlers. We climbed up and around Petroglyph Corner to scramble down and see those engravings. Four of today's hikers chose to take an easier way around this corner that did not include scrambling.

Carefully, we scrambled down, looked at the petroglyphs then scrambled down again so that we ended up at the Turtlehead Peak Trail.

After all eighteen hikers gathered on the trail, we turned to our left and continued down this trail.


The Turtlehead Peak Trail is fairly easy at this point and it is marked with lined stones and a couple of signs. We followed it down to where it junctions with the Calico Tanks Trail, turned right, then followed this trail back to the cars. It was a very pleasant hike on a very pleasant day. Sometimes I just need a little TLC! 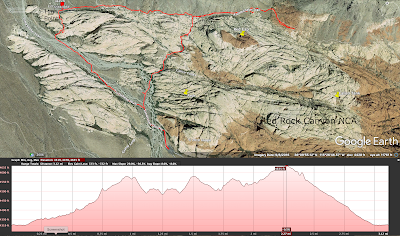 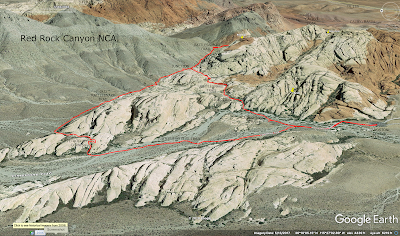 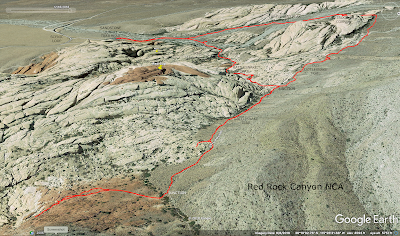