Across from the little community of Blue Diamond, Nevada and within the bounds of Red Rock Canyon NCA, there are five canyons that cut into the hill leading up to the gypsum mine property. If you are standing in Blue Diamond and looking across SR 159, the canyons are named from the right to the left. Therefore, Canyon #1 flows out across from the intersection of SR 159 & Arroyo Street. A small parking area for the trailhead is found in the corner that the two roads make. Since this hike has been off the radar for a while, a large number of hikers (17) showed up for the short but interesting hike.

One of the hikers was David H. He did the honors of leading the group. So, we crossed the highway and started into the brush on a small path. There was a bit of brush until we got about 30 yards into the canyon.

Canyon #1 is a very narrow canyon and has some interesting scrambles that require climbing some walls that provide a few steps and hand holds. The largest was only about 5 feet in height.


We kept our eyes on the canyon floor and noticed a large number of fossils. One interesting and unusual fossil display was a set of plant roots. They were as hard as the rock in which they were seen. Another interesting find was a kind of Paperbag Bush that we had not discovered before. There were also small fossils of sponges, shellfish and other sea creatures from the Precambrian Era. We stayed in the main canyon until we came to a large fork. In the past, we have taken the left fork. Today, we took the right fork climbing up the left side of that canyon.

As soon as the left wall came down to meet us, we climbed up on it. This put us on a ridge between the left and right canyon forks. We took a moment to turn around and see the impressive view as seen in the first photo.


Next, we began climbing that ridge. It was a good climb and the surprising heat of the almost winter day had us sweating. At the top of the hill on the ridge, we stopped for a small break and noticed a snow-capped Griffith Peak peeking up over the Red Rock Canyon Sandstone Bluffs. We crossed the saddle in front of us and intersected with a trail where we turned right. The trail took us around a small peak and right into the gypsum mine property. This is not a corner of the property that is being used.

Another right turn took us down near the old abandoned conveyor building that the mine used years ago to transport the mined gypsum down the cliffs to the manufacturing plant. Nowadays, big trucks are used to move product around.


At the cliff where the conveyor rests, we could see the Las Vegas Strip in the distance. We turned right at the cliff and sat for our break with this view. Here's where we are a bit confused. The map that is used by the Friends of Red Rock shows that the cliff area down to the highway is in Red Rock Canyon NCA. (This boundary is seen on the maps below in pink.) However, we saw signs today that indicate that the boundary line is at the top of the walls of the canyon and do not include the cliff ridge. This area is in danger of becoming residential so the boundary line is of utmost importance. The entire hiking community, a substantial part of the Las Vegas population, is fighting tooth and nail to keep this land from being raped beneath our eyes.

After the break, we followed the trail down the cliff ridge until almost all the way to the bottom edge that is another cliff. We could see our cars from here. Rope, anyone?

We turned to our right and began a steep but doable descent back to Canyon #1. It is important to descend at just the right place.


We followed David down into a side canyon then circled around a corner and finished dropping into Canyon #1 just above the two difficult scrambles. Seventeen hikers are a lot of hikers to gather at a particular drop but everyone was very experienced and arrived at the right place at the right time. We continued down the canyon, through the brush and across the road. This is an interesting and beautiful scramble that is off the beaten track. Excellent group! 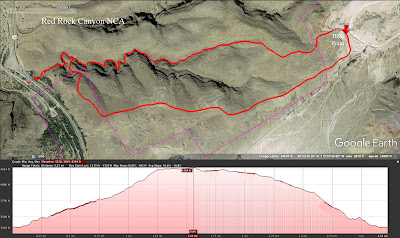 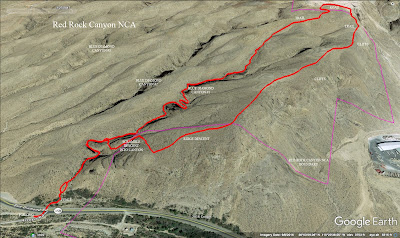 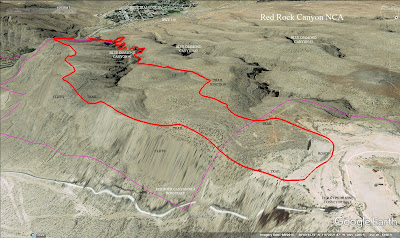 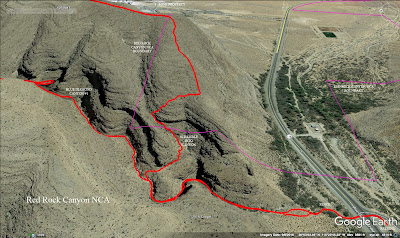 Posted by Kay Blackwell at 4:00 PM