Baseline Mesa rises out of the southeast corner of the Valley of Fire State Park, Nevada at an altitude of 2379 feet, 500 feet above the surrounding terrain. It is not the highest mesa in the park but it is the largest in surface area. In the era when it was being formed by the eroding of soft sandstone around it, the terrain sloped down as it does today into the direction of Boulder Canyon (Lake Mead) and away from the other mesas that were formed higher up in the park. Now, it is an excellent high point to view much of the colorful park starting with the Painted Pinnacles; an area of red and white sandstone at the base of the high end of Baseline Mesa.

These two points of interest, plus the ruins of Buena Vista Campground (circa 1935), are the main reasons for today's hiking route for eight club members.

Careful to obey all speed limits while traveling to and from the park about 1 hour north of Las Vegas, we started at the Fire Canyon Road Trailhead where Silica Dome is located.


We made our way with connecting trails and abandoned roads around to the top of a small flat wash. An option for the first quarter of this hike is to use the road that starts out behind the trailhead restrooms. But, the small wash is much prettier. About half way down the wash (~1 mile), the terrain goes from a cream sandstone to a red sandstone and the paralleling road has a connecting old road that meets the wash. As we descended the pretty wash, we were reading the saga of a mountain lion ... or two ... chasing a bighorn. The cat prints were running up the wash and so were the bighorn's. There was a scuffle at one point and cat prints were seen going the opposite direction. This cat was likely making the prints that we saw throughout the hike.

As we got deeper into the wash, it became more narrow and there were a few scrambles. The potholes at the bottom of every scramble were dry mud that we found we were able to crunch through.

And then! The last scramble, a fun narrow corkscrew type squeeze, appeared innocent enough. Chuck made the drop and I figured that if Chuck could do it, so could I. Hmm. Yes, achilles deep in gooey mud. We all got a laugh! And, there was no water around to clean off the gunk!


Not far after this, we made our turn to the right to climb out of the pretty wash. We knew there was a trail that climbed up to the road above but it took us a few minutes to find it. We did and the road led us to the ruins of the Buena Vista Campground whose heyday was around 1935. This is where we took our break. All that is left of the campground is the stone work, however, it was clear why it was named Buena Vista! We could see much of the colors of Valley of Fire, all the way to Overton and across to Gold Butte where Virgin Peak stands.


We could also see the tip of the lower end of Baseline Mesa which is where we went next. We went back up the dirt road then continued on an increasingly narrow trail.

The trail up to the mesa becomes treacherous as it threatens to fall off the side of the mesa in the scree. We were very careful using this trail that did not appear to have been used lately.


Gaining the top of the scree and black bush covered mesa, we hiked 0.75 mile to the opposite and higher end. The Painted Pinnacles lay out before us with Silica Dome on the horizon. (See first photo.) There is a parting of the rimrock here where we began a steep descent of faith! The first part was sharp limestone /dolomite, then we dove over the edge to redstone. At each juncture of a zigzagged route, we peered down or over the edge and wondered if the descent was actually possible! (Not to ruin the excitement, but I have descended this several times!! Just not recently.) Anywho, we made it down to the Painted Pinnacles Overlook. Determined to find the trail route out from the bottom, we opted not to give in to the temptation to just return to the cars the easy way.

Down we went on a somewhat difficult scramble on slippery crumbling sandstone. Our experience brought us down safely and we began roaming through the wash at the bottom.


We continued following the small wash down until we came to a layered dry fall. The trail that we sought comes into the wash a little above this but we wanted to check out another idea. This idea led us on an interesting scramble onto a trailing ridge from the crest above. Still determined to find the trail that we had initially ignored, we climbed the ridge until we intersected with the said trail.

One hiker who knows the area really well, Chuck S., decided early to hike a traverse route straight across to Silica Dome. This worked well for him.

However, we reached the crest on our trail and turned to the left to follow an old abandoned road (barely visible) all the way back to join Chuck on his intersecting route.


Our trail out was steep and perhaps would be more useful for a descent. Nevertheless, we all hiked into the trailhead with smiles having had a great workout filled with fun. Brian D. has taught us about the beauty that the Valley of Fire has to offer and it's fun to go out and put some of that knowledge to use. By the time I got back to the cars, the mud on my shoes and pants had dried but I put my feet in a plastic bag for the trip home in Jeannie's car! What a day! 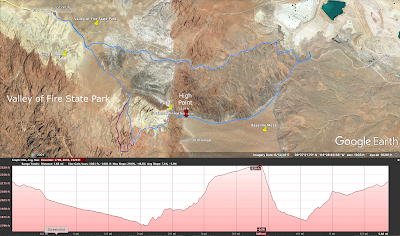 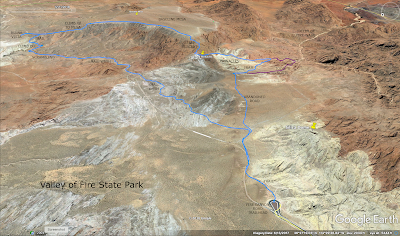 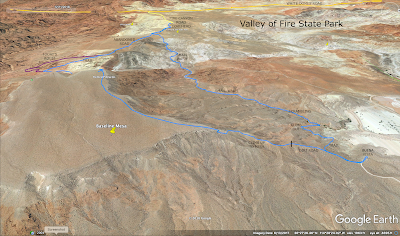 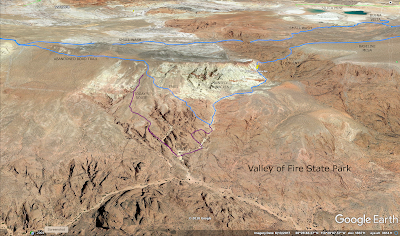 Posted by Kay Blackwell at 2:02 PM