It was a chilly morning in the northern Calico Hills. The sun wasn't far above the horizon when nine hikers converged at the Sandstone Quarry Trailhead parking lot hoping to warm up soon as we embarked on a moderately strenuous scramble around and up to Red Cap. We began the 3.5 mile scramble by quickly hiking out the Turtlehead Peak Trail 0.70 miles to the Petroglyph Corner. Rather than climbing directly up to the petroglyphs, we opted to climb the steep sandstone dune to the right of them. It was a fun way to start the festivities!

After everyone was gathered at the top of the hill, we circled around to view the peephole that might have been used by ancient natives to keep an eye on the opposite side of the big rock from where a cave is located.

There is a small slot serving as an outlet for water that flows out from this large somewhat enclosed area. We took a look-see and found that gravel has filled in some of the slot "puddles."


Next, we turned around and exited the area on the opposite end connecting with a small trail. This used to be part of the Rattlesnake Trail but that has changed and now, we'll call this the Back Trail. The Back Trail leads through desert terrain at the base of Turtlehead Peak and connects with what is now referred to as the Rattlesnake Trail. We followed the Back Trail until it crossed a nice wash. Here, we began descending the wash. There are a few small nice scrambles ending with a large sliding drop into a beautiful slot canyon. (Find the drop behind an overgrown bush!)

This slot may be named Turtlehead Canyon because if you turn around inside the slot, Turtlehead Peak is seen staring straight down into it!

The beautiful slot drops down into gravel and the wash eventually junctions with the, now, Rattlesnake Trail. There, we turned to the left and followed different trails to the bottom of the Red Cap West Side Ascent.


This route begins with a fun steep climb up a crack, around a rock & bush, then up through a crack slot. Follow the slab around to the left and start a steep climb up through rocks and slabs. A good rule of thumb for this route is to keep a general leftward direction, sort of like an ascending spiral. After passing on the left of an especially deep crack, we crossed the cream colored sandstone over to another ascent crack to make the final climb up to the "tank level." When everyone had gathered again, we turned to the left and began the last climb to Red Cap.

When we reached the redstone, most of the group continued their climb up to the peak while the remaining three hikers rested below. When the peak climbers returned, we all took a break.

We returned down to the tank level and began the "tank tour" by dropping down to the Wall Tank. It was a disappointment. The tank was wet but there was no standing water in it.


Continuing the tour, we hiked up to the next tank. This one is the one that usually has water ... if any of them do. Half of the tank bottom was covered with standing water and we were able to walk through the dry side to the other side of the tank. Two newbies in the group decided to walk around the regular way as seen in the second photo. From there, we went around the corner and dropped into the large, almost always empty, tank below then waded through the 2-foot high grass/cattails(?) to the other end. A still-used trail led us up and over to the steep trail descent down to Mass Production Wall. The steep trail is precarious at best so we went slowly.

Finally near the wall, we descended the steep slab and began the slow deliberate descent by the wall on the small boulders. Our careful descent produced no injuries!

We dropped into the Calico Tanks Trail just as a small group of young hikers turned up the hill. I always worry that we are misguiding tourists when this happens. Nevertheless, they will have a good time!

From this junction, we turned to the right and began scrambling down the Calico Tanks Trail. Choosing to side-step the sandy portion of the trail, we took the high route above the trail. Someone has placed "cairns" in every branch of an old tree here. (Hmm. May not be good for the old soul.) When we connected again with the Calico Tanks Trail, we stepped up our pace to burn off that last bit of energy back to the cars. Fun and fulfilling morning! 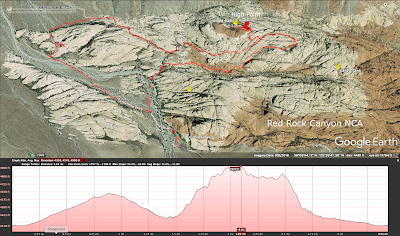 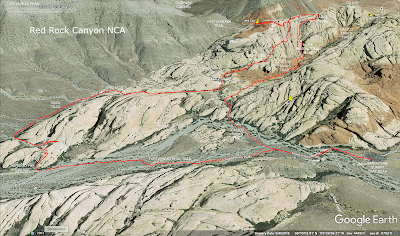 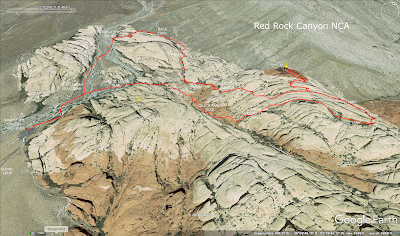 Posted by Kay Blackwell at 8:54 AM